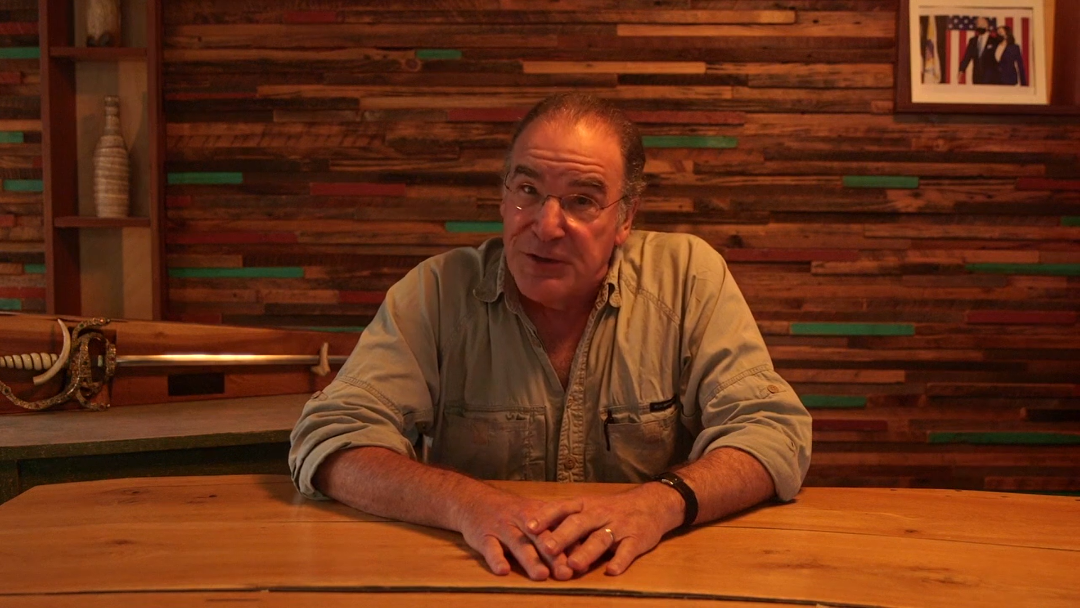 Mandy Patinkin appears in an ad for the Jewish Democratic Council of America released on October 23, 2020. (YouTube)
Advertisement

(JTA) — Mandy Patinkin brought a piece of his silver-screen past to the table in his first direct appeal to American Jews to vote for a candidate, Joe Biden.

In an interview, Patinkin said it wasn’t the first time he used objects that melded his fictional and real universes: Saul Berenson, the CIA bureau chief he played in the Showtime series “Homeland,” kept on his desk a passage that he — Mandy Patinkin, that is — favors from tractate Sanhedrin in the Mishnah.

The Jewish Democratic Council of America will target with a digital ad Jews in swing states — especially Florida — who have yet to vote. It plays on Patinkin’s character in the 1987 movie “The Princess Bride,” Montoya, a skilled fencer who seeks to avenge his father. Patinkin’s catchphrase in the movie is, “Hello. My name is Inigo Montoya. You killed my father. Prepare to die.”

Visible on a table behind Patinkin is the sword he used in the movie 34 years ago. “Now I polish off my most powerful weapon once again,” he says, and pulls a pen out of his shirt pocket. “Prepare to vote.”

The ad is the latest installment in Patinkin’s emergence as a late-in-life Jewish icon, which kicked off earlier in the pandemic when his son Gideon began posting short videos of playful interactions among Gideon, Patinkin and Patinkin’s wife, Kathryn Grody. In one, they munch matzoh while giving hilariously wrong answers to pop culture questions; in another, Patinkin blows a shofar, which he reprised on MSNBC to mark the death of Ruth Bader Ginsburg in September.

The Jewish Telegraphic Agency spoke with Patinkin Friday about why he chose to make this ad, his first direct appeal to Jews to vote for a candidate; his characters’ Jewishness and the Jewish principles he brings to the set. This interview has been edited for length and clarity.

JTA: Why make this appeal now?

Patinkin: Because I think our country and our world is broken. My values are led by Jewish ideas. My whole life was tikkun olam, to repair the world. I learned from a dear rabbi friend that at the end of creation, there was a shattering and it was the kabbalists who came up with the notion that they took those shards and began to put them back together, which is where tikkun olam along came from. And there are shards everywhere. There has been a shattering of our lives, of our souls, of our economy, of our environment, of our educational system and, and certainly of trust and truth and everything that I care about. That is the moment when all hands are on deck, and we will leave nothing on the field.

Why bring in the sword?

That sword has a fame somewhat greater than my own.

You’ve emerged as a late-in-life Jewish icon. What has that been like?

Look, I’ve led my life and try to do the work as best as I can. I can tell you that every role I’ve ever played, whether it was Che Guevara, George Seurat in “Sunday in the Park with George,” Inigo Montoya in “The Princess Bride,” Saul Berenson in “Homeland,” Avigdor in “Yentl,” they’re all Jewish.

How is Inigo Montoya Jewish?

I have, you know, the famous line in the movie that everybody says, you know, “Hello, my name is Inigo Montoya.” That’s not my favorite line. My favorite line is the last line that my character says in the movie … these lines I really didn’t understand until my 50’s. They are the essence of what I believe is the definition of how our ancestors wished us to live our lives. “You know, I have been in the revenge business so long, now that it’s over, I don’t know what to do with the rest of my life.” When you take a man like [former Israeli Prime Minister Yitzhak] Rabin, who held every imaginable position from soldier to statesman and turned from soldier and warrior into a peacemaker, that is the greatest transformation a human being can come to. I certainly hope that no one has to be a warrior in this world.

[Patinkin this week emceed a memorial held by Americans for Peace Now, an organization that the actor has been involved with for decades, marking the 25th anniversary of Rabin’s assassination by a Jewish extremist.]

How are all your characters Jewish?

They’re all Jewish, there’s gevalt in all of them. Being Jewish is at the core of my existence and what that core is defined by … it used to be when I was a kid, two things: one was compassion, rachmones, and the other was forgiveness. And I changed my feelings about forgiveness because as we all know, the hardest person to forgive is ourselves. I came to realize through a great teacher that why should we forgive ourselves, are we deities? No, we’re human beings, we’re not God. We’re human beings and human beings make mistakes. So let’s just simply do the best we can and not waste precious life energy trying to beat ourselves up for anything we might have done that we didn’t feel was the right thing.

Does your forgiveness extend to President Donald Trump and Republicans whom you are urging Jews to vote against?

I have great compassion for my Republican brothers and sisters and friends and fellow citizens. I want them to live. I don’t want them to be struck down by COVID-19, because we don’t believe in endorsing the ideas of science which I believe deeply in, to wear a mask, to keep social distance, to wash your hands, for God’s sake, we’ve lost 220,000 lives and counting. And there’s no reason for that loss, all the finest medical journals have made that clear. And so, so, you know, my lord.

You’re active with the International Rescue Committee and other nonprofits. How does that fit in?

When I was filming the fifth season of “Homeland” in Berlin, the very first episode of that season was centered around the storyline around the Syrian refugee camp. At that moment 125,000 Syrian refugees were trying to make it across the Balkan route into Germany. And I looked at those photos, and I saw my grandparents and ancestors who fled to the United States and the United States welcomed them with open arms. And all of us Jews are here because of that welcoming and the policies of the United States that opened their arms to welcome our ancestors.

How would Saul Berenson, the CIA bureau chief, explain supporting Biden to his sister, a West Bank settler? That demographic strongly favors Trump for his Israel policies, which include moving the U.S. embassy to Jerusalem and coming up with a peace plan that would allow Israel to annex its settlements.

To watch for five years, the last four intensively, this president, trying to destroy the intelligence community that literally saves lives, my dear friend, where do you think Governor [Gretchen] Whitmer would be today? [Michigan’s governor was the target of a foiled kidnapping/murder plot planned by right-wing extremists.] If those 17 men had not been discovered through the intelligence community [which Berenson was part of] … You know this is very real and because of listening, and algorithms and word couplings and everything they tracked those 17 guys down in the woods that if you think that there are other people in other places, in other woods, rural areas, filled with hate with the Proud Boys and the hatred rhetoric and is vulgar. It is our worst nightmare that we’ve lived through before.

You blew the shofar for Ruth Bader Ginsburg on MSNBC after her death. Tell me about your approach to shofar-blowing.

I heard that the gates of heaven close and right before they close you blow that one last Tekiah Gedolah … now I’m someone, just to give you my Jewish nature, I do not say the Mourner’s Kaddish once a year on Yom Kippur during the Yizkor service only — I certainly say it then — but I say it every day sometimes two, three times a day, because it doesn’t mention anyone who dies, and it reinforces your belief in life. And that’s what I love. And so, I’ll blow the shofar any day. I want those prayers to be heard because I don’t believe what some rabbi told me, that the gates of heaven close at the end of Yom Kippur and they don’t open up until another time of year when, you know, I guess you have Rosh Hashanah and you start praying. I believe those gates are open 24 hours a day, seven days a week, 365 days a year.