Iran, Israel, anti-Semitism and more: What to watch in Joe Biden’s presidency 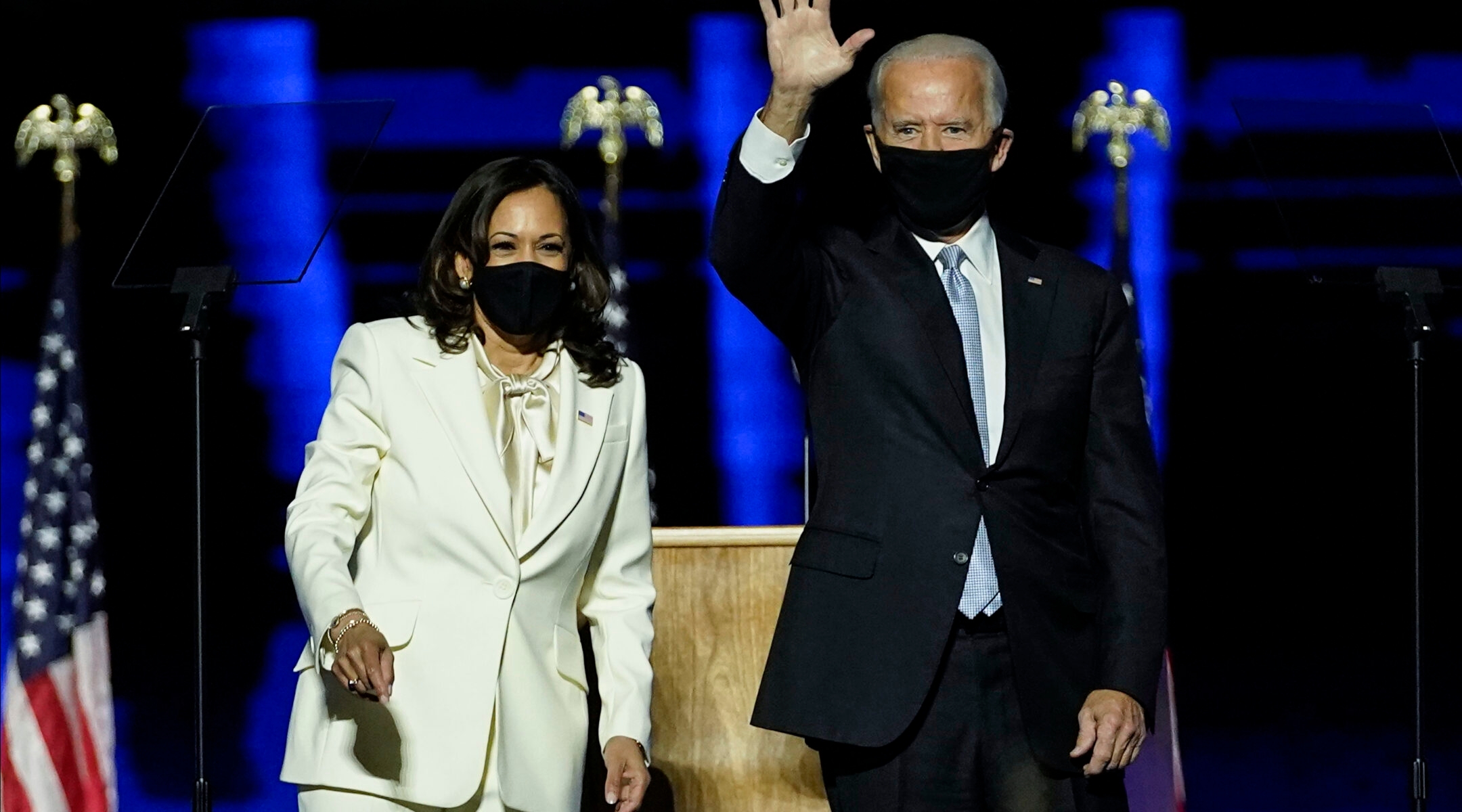 WASHINGTON (JTA) — On Joe Biden’s first day as president, he plans to launch a task force to reunite children and parents separated at the country’s southern border.

It’s one of several ways Biden has vowed to reverse policies put in place by President Donald Trump, and it’s important to many American Jews for whom immigration policy carries an emotional weight.

But on many issues important to American Jews, change may come slower, or not at all. When it comes to where the U.S. Embassy in Israel is located, for example, Biden has indicated that he has no intention to turn back the clock. On other Israel issues, change is likely but exactly what a Biden administration will try to do is not yet clear.

Here’s a look at what might happen after Biden becomes president on Jan. 20, 2021.

Anti-Semitism: When Biden launched his campaign in April 2019, he said he had considered retirement — but was appalled by Trump’s equivocations after the deadly neo-Nazi and white supremacist march in 2017 in Charlottesville, Virginia. Biden constantly cites combating bigotry and anti-Semitism specifically in his appearances, including at the Democratic convention.

Biden wants to develop a “comprehensive approach” to combat anti-Semitism, in consultation with the Jewish community. Trump cut some programs tracking extreme right domestic terrorists; Biden said he will restart them.

Trump last year signed an executive order recognizing Jews as a protected class deserving of civil rights protections. The order used as its definition of anti-Semitism the International Holocaust Remembrance Alliance definition, which is controversial because it includes some forms of Israel criticism. The order has already resulted in Education Department investigations of extreme anti-Israel activity on campus. Some Democrats embrace the IHRA definition, but civil liberties groups fear that its use as an enforcement tool inhibits speech freedoms. The Biden campaign has not said what its plans are for the executive order.

The Second Guy: Kamala Harris’ husband, Douglas Emhoff, is Jewish; he will not only be the “second gentleman” (caveat: No one has settled on a term for the job), he will be the first Jewish second spouse. Emhoff has been vocal about his Jewish identity, and it will be interesting to see how that plays out in a role that has been used to advance education initiatives.

Immigration: Immigration policy carries a special emotional weight for many Jewish Americans who are mindful of their own heritage of being refugees — and of the devastating toll that the world’s hesitation to accept refugees caused for Jews during the Holocaust. Trump pursued an aggressively anti-immigrant agenda, including by reducing refugee admissions and separating children from their parents at the border, sometimes permanently. Biden has vowed to launch a task force to reunite those families and to dramatically increase refugee admissions.

The Abraham Accords: Biden’s message since Tuesday has been unity. He wants to achieve comity with Republicans. “It’s time for America to unite and to heal,” was his first post-announcement statement. He’s reportedly got a few Republicans in mind for his Cabinet.

One obvious way that his commitment to bipartisanship will play out in his Middle East policy is in the Abraham Accords, the normalization agreements brokered by Trump between Israel and the United Arab Emirates, Sudan and Bahrain. Biden has said he likes the accords. His aides have said he urged rapprochement between Israel and the Gulf states during Obama’s second term when he was vice president.

So should we expect more of the same? Perhaps: Other Arab countries that have long had unofficial ties with Israel, including Oman and Morocco, might announce even before the inauguration.

The big fish, however, may hold out. Saudi Arabia will likely want the carrot that the UAE has secured, a major arms deal; Trump has cajoled Israel into not objecting to the sale of stealth combat jets to the Emirates.

But Democrats are unhappy about the sale, and that unhappiness would grow exponentially with any proposed arms sale to Saudi Arabia. Democrats object to the devastating war Saudi Arabia is conducting in Yemen and have not forgotten the kingdom’s role in the murder of journalist Jamal Khashoggi.

The Deal of the Century: In January, Trump finally rolled out the Israeli-Palestinian peace proposal he had touted for three years. One component of the deal that would come off the table with a Biden presidency would be the eventual partial Israeli annexation of West Bank territory. Even in that instance, though, there’s not much practically different between the Trump and Biden postures: The Trump team told Benjamin Netanyahu he needed Palestinian buy-in to the peace plan before annexing territory, and that never was going to happen.

Biden will reinstitute the emphasis on the two-state outcome as an endgame, but don’t expect a major push for peace from his White House. Biden will have on his foreign policy team plenty of Obama veterans and they feel burned by their two failures (2010-2011 and 2013-2014) to get to a deal. The sense on Biden’s foreign policy team is that peace has to be organic, and must be initiated by the Israelis and the Palestinians.

The Trump recognitions: Trump recognized Jerusalem as Israel’s capital and moved the U.S. Embassy to the city. He also recognized Israel’s claim to the Golan Heights, which Israel captured from Syria during the 1967 Six-Day War. Biden has said that Trump’s Jerusalem recognition was ill-timed, absent an Israeli-Palestinian deal, but has also said he would not reverse it. He has not commented on the Golan, but with Syria still convulsed in violence and instability even as its civil war dies down, don’t expect any dramatic Biden action in this area. Biden has suggested that Trump was too accommodating of the Assad regime, so he’s not about to hand the same regime a plum.

Aid to Israel: During the primaries, some Democratic candidates spoke of conditioning defense to Israel on its behavior; Biden repeatedly rejected that proposal outright. He intervened to keep the word “occupation” out of the Democratic platform.

The Palestinians: Biden has said he will reestablish the diplomatic ties with the Palestinians that Trump ended because the Palestinians would not play along with his peace plan. Expect a return of the Palestine Liberation Organization envoy to Washington and a reopening of the Jerusalem consulate that deals specifically with Palestinians — Trump wrapped its functions into the embassy.

Iran: Biden has faulted Trump for exiting the Iran nuclear deal. Trump said the deal, which exchanged sanctions relief for a rollback of Iran’s nuclear capability, was too generous and not strict enough. Israel’s Netanyahu government was in agreement with Trump; Benjamin Netanyahu lobbied intensely against the deal, which was brokered by President Barack Obama, and which Biden helped sell to Congress.

Trump’s withdrawal angered European partners to the deal and has pushed Iran’s economy to the brink of collapse — but it has done nothing to stem Iran’s nuclear development. In fact, since the U.S. pullout, Iran has accelerated its nuclear development, blaming the United States for violating the deal.

Biden wants back in, in part because he wants to repair ties with Europe, and also because he believes the deal is the best means of keeping Iran from obtaining a nuclear weapon. He has said he wants to make it stricter, extending the “sunset clauses,” which allow Iran to wind down some of the restrictions. Not so clear is whether Biden would want restrictions on Iran’s missile program and its regional adventurism rolled into a renewed deal.