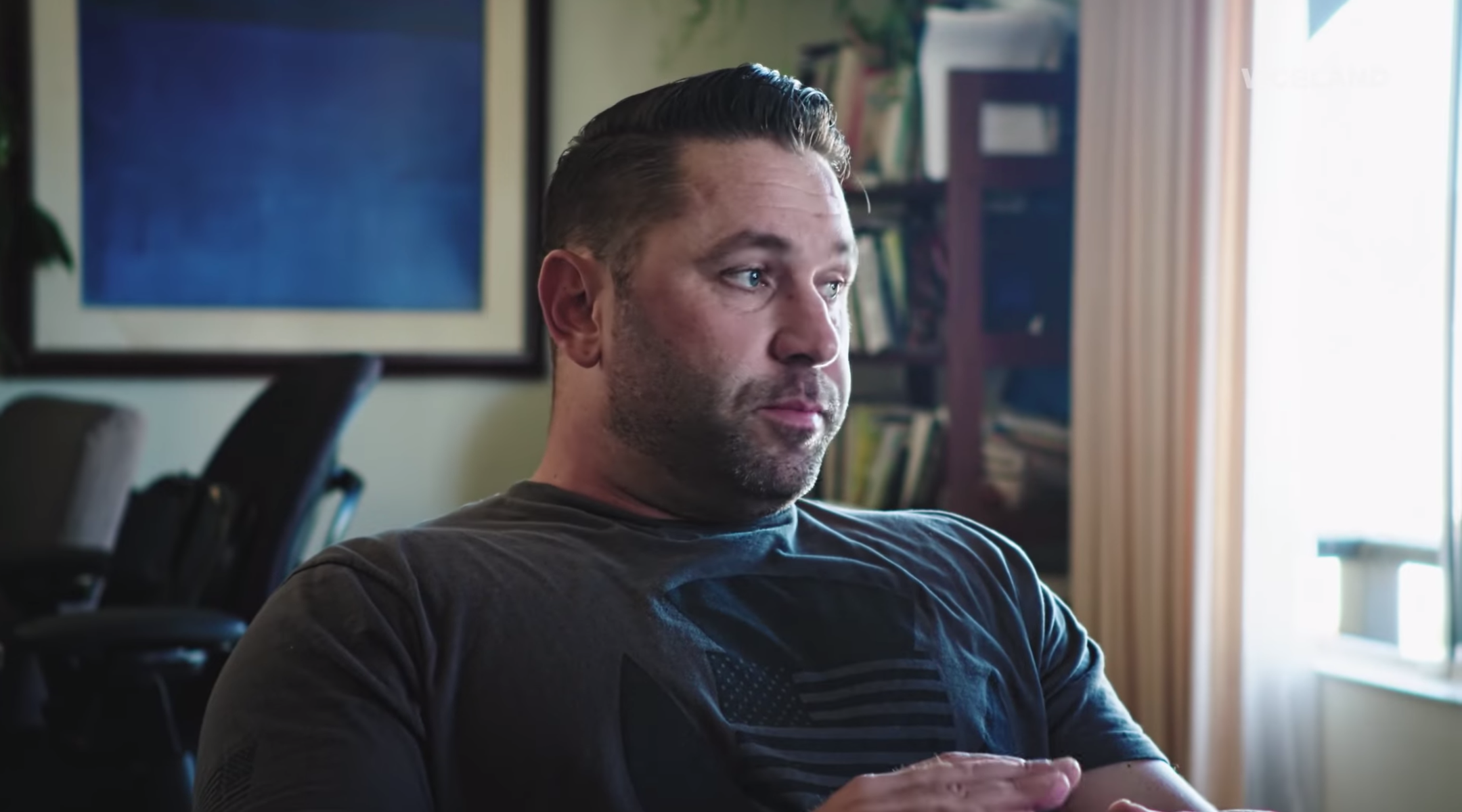 Proud Boys activist Kyle Chapman now claims he has transformed the group into an explicitly white supremacist organization, though it's unclear whether he has a following. (Screenshot)
Advertisement

(JTA) — One of the leaders of the Proud Boys, the far-right group that President Donald Trump told to “stand back and stand by” during a presidential debate, is trying to rebrand the organization as explicitly white supremacist and anti-Semitic.

Kyle Chapman, the founder of a “tactical defense arm” of the Proud Boys known for engaging in street violence, claimed in a message on the encrypted chat app Telegram that he has staged a “coup” against the current leader of the Proud Boys — a Black man named Enrique Tarrio.

“We will confront the Zionist criminals who wish to destroy our civilization,” Chapman wrote after using other bigoted language. “We recognize that the West was built by the White Race alone and we owe nothing to any other race.”

Chapman also wrote that he has renamed the group the Proud Goys, referring to the Jewish term for non-Jews that neo-Nazis have tried to appropriate and use to symbolize their anti-Semitism.

The move comes as the Proud Boys are preparing to protest with other right-wing groups in Washington, D.C., on behalf of Trump’s unsubstantiated claims that the presidential election was stolen from him through widespread voter fraud.

It is unclear how Chapman’s call has been received by others in the group. Other Proud Boys channels on Telegram have not reflected the changes he wants to institute, and a message from the administrator of one said, “No, we are not the Proud Goys. No, Kyle didn’t stage a coup,” and then referred to him with an ableist slur.

The Proud Boys were founded in 2016 by Gavin McInnes, a far-right provocateur and misogynist who also co-founded the Vice media brand. The group has billed itself as a “Western chauvinist” fraternal organization but thus far has insisted that its preference for “Western civilization” was not built on racist or anti-Semitic views. It has a chapter in Israel.

“I denounce anti-Semitism. I denounce racism. I denounce fascism,” Tarrio has said, according to the right-wing outlet Washington Times. “I denounce communism and any other -ism that is prejudiced toward people because of their race, religion, culture, tone of skin.”

However, the Proud Boys have documented ties to white supremacist groups. McInnes posted videos surrounding a 2017 trip to Israel in which he made anti-Semitic statements. A former Proud Boys member was the organizer of the deadly 2017 white supremacist rally in Charlottesville, Virginia.

Members are known for wearing gold-and-black Fred Perry polo shirts, which the retailer has discontinued in opposition to the group, and engaging in street brawls with left-wing protesters.

At the first presidential debate in September, when asked if he denounced the group, Trump told the Proud Boys to “stand back and stand by.” Trump later said he didn’t know about the group and told it to “stand down.” But the group adopted “stand back and stand by” as a rallying cry, sparking fears that Trump’s words would encourage far-right groups to foment unrest on Election Day.

That has not happened, but the Proud Boys and other right-wing groups are preparing to mobilize in support of Trump’s false claims of election fraud. On Saturday, protesters are expected to converge on Washington in an event being billed as a “Million MAGA March.” The rally is being led by Scott Presler, a pro-Trump activist who has been affiliated with ACT for America, an anti-Islamic group.

In his post on Telegram, Chapman said he deposed Tarrio, whom he referred to with a racial slur. He wrote that the group will now focus on “the issues of White Genocide, the failures of multiculturalism, and the right for White men and women to have their own countries where White interests are written into law and part of the body politic.”

“White genocide” is a myth advanced by white supremacists that falsely claims that nonwhite immigration and interracial marriage are a conspiracy to destroy white people.