Officials predicted violence due to the election. It hasn’t happened — yet. 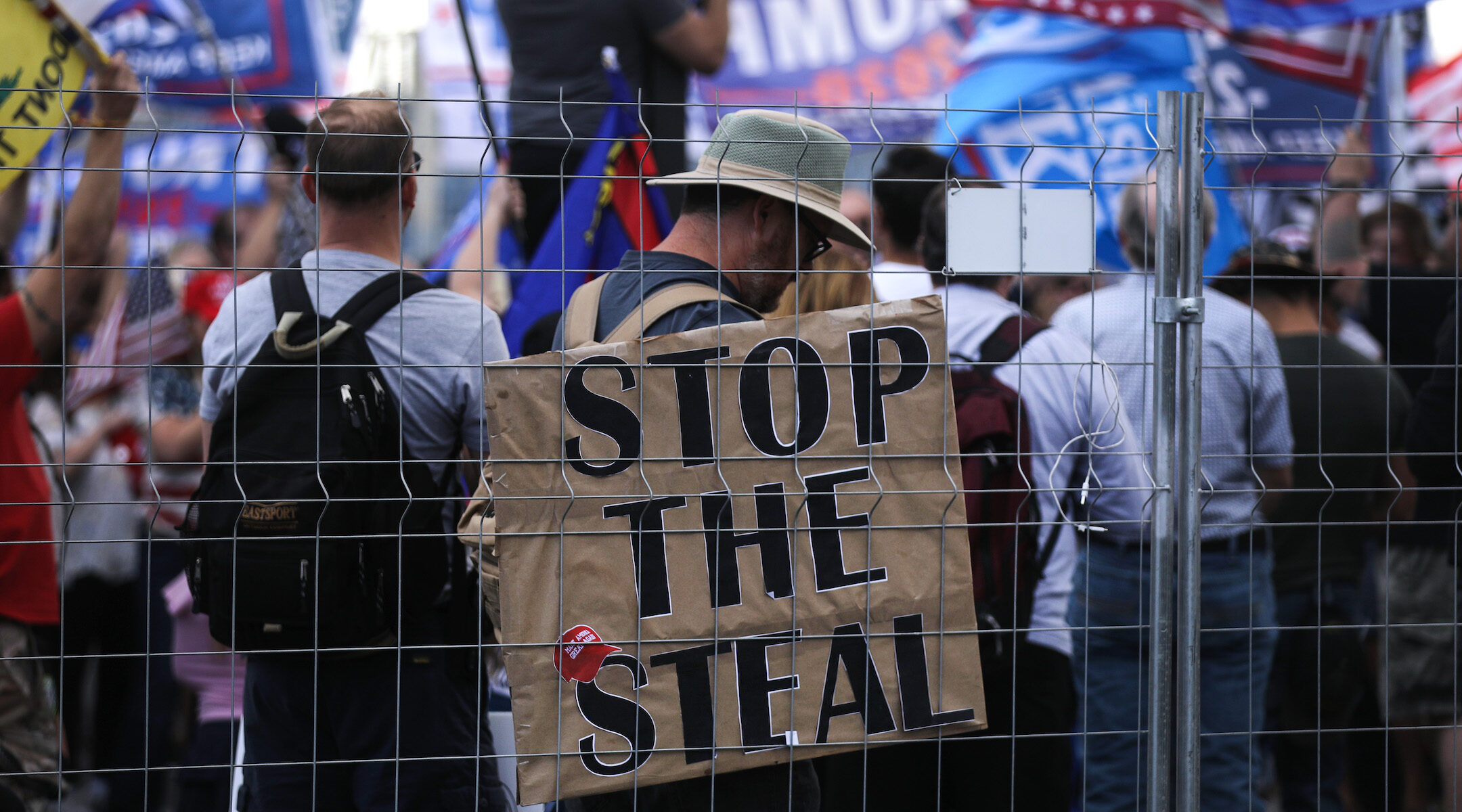 Supporters of President Donald Trump demonstrate at a ‘Stop the Steal’ rally in front of the Maricopa County Elections Department office in Phoenix on November 7, 2020. (Mario Tama/Getty Images)
Advertisement

The country’s atmosphere, they said, was primed for unrest and ideological attacks, born of a worsening pandemic, a possibly uncertain election outcome, increasingly popular extremist ideologies and a president who trumpets conspiracy theories and casts doubt on the democratic process.

The FBI set up a special command post tasked with addressing civil unrest. Jewish communal officials told synagogues and community centers to be especially on guard, given the recent history of lethal anti-Semitic attacks. Calvin Shivers, an FBI official, told attendees at a Jewish security webinar, “The nation remains poised for potential volatility.”

But a week after Election Day, significant violence has not come to pass. Protests and street activism have thus far been devoid of bloodshed. And even as President Donald Trump and his acolytes refuse to acknowledge the result of the vote, there is a declared winner, Joe Biden, who is preparing for a transfer of power in January.

The Secure Community Network, which coordinates security for Jewish institutions nationwide, received no reports of threats or attacks on Jewish communities on Election Day. But it and other groups caution that far-right activity is still a threat.

“I am cautiously optimistic, but we are remaining vigilant,” said Alex Goldenberg, lead intelligence analyst for the Network Contagion Research Institute, which studies online hate. “We haven’t seen any massive rioting materialize across the country since the election.”

He added, “We’re still not out of the woods and we have a long way to go before we can safely say things have calmed down, but I think the fact that the press in this country has announced a president means there’s some sense there will be a future.”

Security analysts all stress that while violence hasn’t happened yet, it still very well could, especially if leaders continue to sow doubt about the democratic process. And there have been some worrying signs.

Two armed men were arrested last week in Philadelphia after allegedly threatening a building where ballots were being counted. They had driven from Virginia in a Hummer adorned with bumper stickers supporting the pro-Trump QAnon conspiracy theory, which is rooted in anti-Semitism. And a Staten Island man was charged Tuesday with threatening to “exterminate” Democrats including New York Sen. Chuck Schumer, whom he called “the Jew Senator from Jew York” on social media.

The Anti-Defamation League has reported that “there have been at least 13 alleged terrorist plots, attacks or threats perpetrated by right-wing extremists” in the past year, including a foiled plot to kidnap Michigan Gov. Gretchen Whitmer.

The Institute for Strategic Dialogue, which tracks hate and extremism online, reported that leading up to Nov. 3 there were 200,000 posts a day on social media about voter fraud. There were 400,000 such posts on Election Day, and a high of 2 million on Nov. 5.

In addition, the expression “stop the steal” has proliferated among Trump supporters who falsely allege that he was illegally robbed of victory. While one large Facebook group with that name was taken down, the institute counted at least 20 others with 320,000 members in total.

The Network Contagion Research Institute found that social media mentions of George Soros, the liberal megadonor who is an avatar of anti-Semitism on the right, doubled on Election Day.

Trump supporters appear to be abandoning Twitter for Parler, an alternative social media platform that does not append notes to disinformation about politics. According to NBC News, Parler has risen to the top position on both Apple’s and Google’s app stores, and the company says its user base has grown from 4.5 million to 8 million in the past week.

These shifts are happening while Trump has fired the leadership of the Department of Defense and appointed his own allies instead. The outgoing defense secretary, Mark Esper, had clashed with Trump earlier in the year on deploying the military at civilian protests in the United States. He recently told the Military Times, “Who’s going to come in behind me? It’s going to be a real ‘yes man.’ And then God help us.”

“There’s no threat until there is a threat,” said Ryan Greer, the ADL’s director for program assessment and strategy. “We may see someone who doesn’t get stopped, and there is violence. And that very well could happen. We’re a little less concerned than we were that there could be more widespread violence or widespread threats, but we do think there’s still a pretty high threat of a few individuals in a few places that could become a more tangible threat.”

Extremism researchers told the Jewish Telegraphic Agency they are pleasantly surprised that violence hasn’t materialized so far. They credit law enforcement in swing states for getting ahead of the threat and being on guard for alleged attackers like the men from Virginia. The ADL reached out to law enforcement agencies, Greer said, to let them know of potential threats they were seeing.

“Officials already knew of the threats and were already acting against them,” Greer said. “We shared our information with enough time for them to take increased action.”

Security officials also say that the drawn-out vote counting — which they feared could lead to uncertainty and chaos — actually defused tension. Had the race been called on Tuesday night, they say, people may have protested a hasty outcome. The delayed result made people wait a few days and kept both sides optimistic, which may have cooled heads.

They added that Biden’s ultimately clear win has led fewer people to doubt the election’s integrity, which might not have happened had the margins been thinner.

“The lack of a clear and decisive determination on election night and a more elongated process, that may have in fact reduced tension or served somewhat as a pressure valve for people,” said Michael Masters, CEO of the Secure Community Network. “I think that may have lessened tensions or reduced the likelihood of an event which would have happened, violence or protests, if there was an immediate determination that people felt came too quickly.”

Of course, there is a substantial subset of Trump supporters, including the leaders of the Republican Party, who have either bought into or are indulging specious claims of election fraud. And though that has led to vague discussions of violence in online extremist spaces, Masters said, it has yet to coalesce into a concrete threat of violence.

“We’ve seen some conversation and chatter online, mostly in websites associated with far-right groups, Boogaloo Boys and others, but it seems mostly that it’s conversational or aspirational in nature,” Masters said. “There are no specific or credible threats that we’re aware of.”

That online chatter could pose more of a present danger if and when Trump’s lawsuits against the election result are dismissed, said Heidi Beirich, co-founder of the Global Project Against Hate and Extremism. One far-right group with a history of violent clashes, the Proud Boys, is planning a protest in Washington, D.C., this weekend. At a debate in October, Trump told the group to “stand back and stand by.”

“I’m worried about the militias who feel that their guy has gone down and socialism is coming for their guns,” she said. “I just don’t see how people who have that political worldview that they’re being replaced by Jews or by minorities are going to sit quietly, because they never have.”

Anti-extremism organizations and government agencies including the Department of Homeland Security have said that white supremacists pose the biggest domestic threat to the United States. In recent years, the vast majority of extremist killings have come from the right, including synagogue shootings in Pittsburgh and Poway, California. But the Network Contagion Research Institute is also keeping an eye on extremists on the left, who are also using charged rhetoric.

That includes an anarchist group called CrimethInc. that describes itself as a “rebel alliance” and that has suggested activists should “intervene to interrupt the functioning of the economy itself” if Trump appears like he’s about to reverse the election result. The group has also warned of Biden continuing Trump’s policies.

People on the far left are “saying very openly that they still consider themselves under a tyrannical government” regardless of the election winner, said Joel Finkelstein, the institute’s director.

While threats still exist, Masters said that he and his colleagues are more optimistic now than they were a month ago.

“If we view the lifecycle of the event — that we were looking at violence before, during and after the election — we are through two out of three of those phases with minimal disruption,” he said.

But he added, “That is not to say that we are not going to see something occur.”