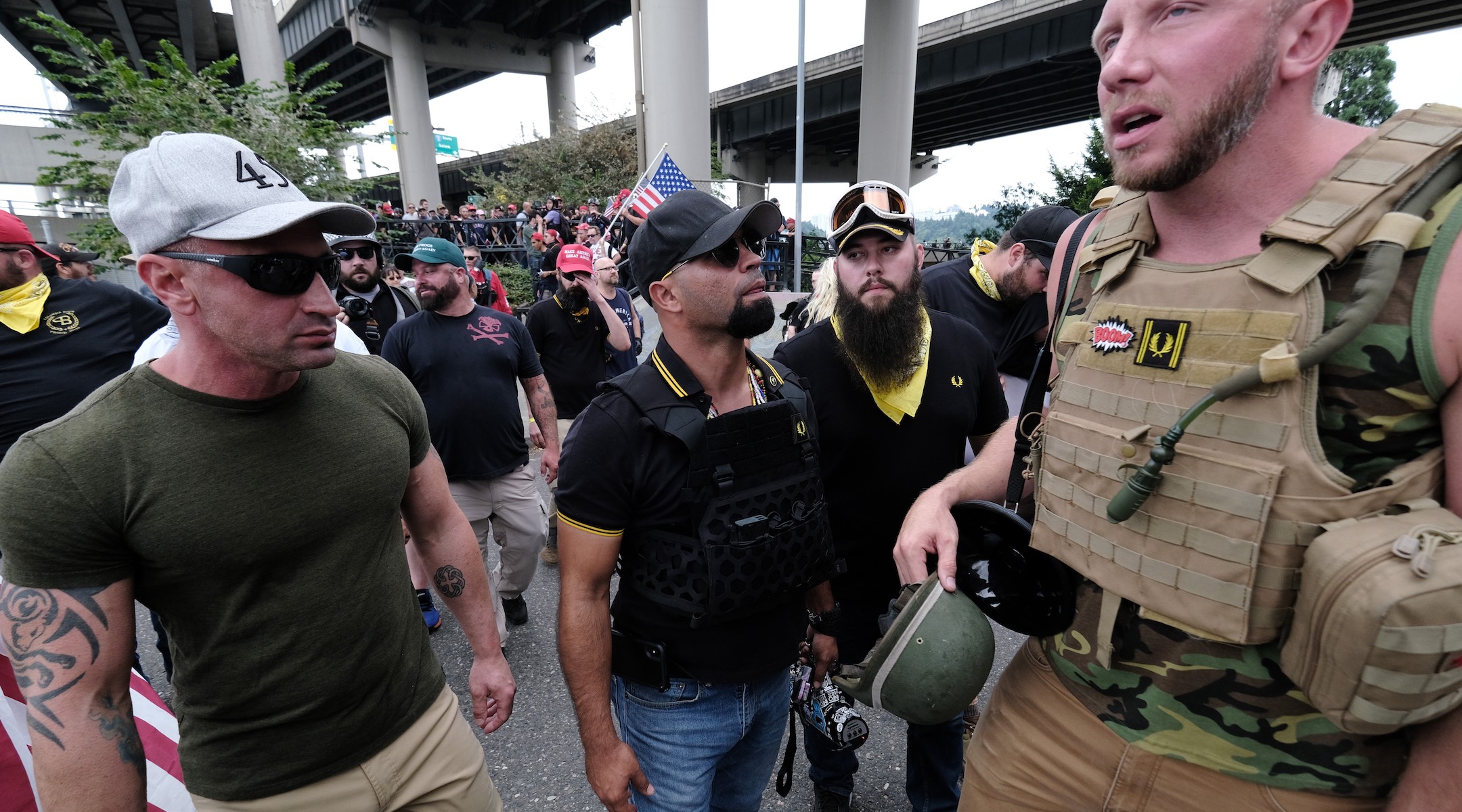 Far-rightists from the Proud Boys wait to get into vehicles after marching across the Hawthorne Bridge in Portland, Ore., Aug. 17, 2019. (Alex Milan Tracy/Anadolu Agency via Getty Images)
Advertisement

(JTA) — Who are the Proud Boys, the far-right group that Donald Trump name-checked at the first presidential debate? And do they hate Jews?

The answer to the second question: Some of them — including their founder — certainly do.

Let’s back up: At the debate Tuesday night, moderator Chris Wallace asked Trump whether he would condemn white supremacists from the debate stage. He did not. What he did say, amid denunciations of the far-left Antifa, was this:

“Proud Boys, stand back and stand by, but I’ll tell you what, somebody’s gotta do something about Antifa and the left because this is not a right-wing problem, this is a left-wing problem.”

The group Trump referred to, the Proud Boys, is a far-right, “western chauvinist” fraternal organization founded by Gavin McInnes that supports Trump and has engaged in street violence. Anti-Semitism is not core to the group’s ideology, but according to the Anti-Defamation League, the group has allied with white supremacists, and McInnes has made a series of anti-Semitic statements. The ADL estimates that it has several hundred members.

Want more stories about anti-Semitism in America? Sign up for JTA’s daily newsletter.

A former member of the Proud Boys, Jason Kessler, was the primary organizer of the 2017 white supremacist rally in Charlottesville, which Joe Biden again criticized for its anti-Semitism during the debate Tuesday. Chapters of the Proud Boys have marched with neo-Nazis on other occasions as well.

Just as members of the Boogaloo Bois, another far-right group, frequently wear Hawaiian shirts, the Proud Boys have adopted a specific quasi-uniform, in their case a black polo shirt with yellow trim produced by the British company Fred Perry. Late last week, the company announced that it would stop selling the shirts and issued a forceful statement reiterating its top executive’s previous condemnation of the Proud Boys.

Fred Perry, the Englishman who founded the company in 1952, “started a business with a Jewish businessman from Eastern Europe. It’s a shame we even have to answer questions like this. No, we don’t support the ideals or the group that you speak of. It is counter to our beliefs and the people we work with,” John Flynn, the company’s chair, said in 2017 and again in the new statement.

“And, in case anyone has any doubts, the Proud Boys are a virulent strain of American right-wing extremism,” ADL CEO Jonathan Greenblatt tweeted on Tuesday night, following the debate. “They have a long track record of violence, including in Portland this past weekend.”

He wrote that Trump “owes America an apology or an explanation. Now.”

McInnes made two videos surrounding a 2017 trip to Israel, including one originally titled “10 things I hate about the Jews” that contained an anti-Semitic rant.

In that video, he said Jews have a “whiny paranoid fear of Nazis.”

“I felt myself defending the super far-right Nazis just because I was sick of so much brainwashing and I felt like going, ‘Well, they never said it didn’t happen. What they’re saying is that it was much less than 6 million and that they starved to death and they weren’t gassed, that they didn’t have supplies,’” he said in the second video, before adding, “I’m not saying it wasn’t gassing.”

He also blamed Jews for Josef Stalin’s starvation of millions of Ukrainians. “I think it was 10 million Ukrainians that were killed,” he said. “That was by Jews. That was by Marxist, Stalinist, left-wing, commie, socialist Jews.”

Update: Since the debate, members of the Proud Boys have printed the phrase “Stand back, stand by” on t-shirts they are selling. Cassie Miller, a research analyst at the Southern Poverty Law Center, said Wednesday regarding the Proud Boys that “Trump’s recent statement at the debate is something that emboldened them, that thrilled them, and that will add some legitimacy to the group.”

Also Wednesday, Trump told reporters, “I don’t know who the Proud Boys are,” and “Whoever they are they need to stand down.”