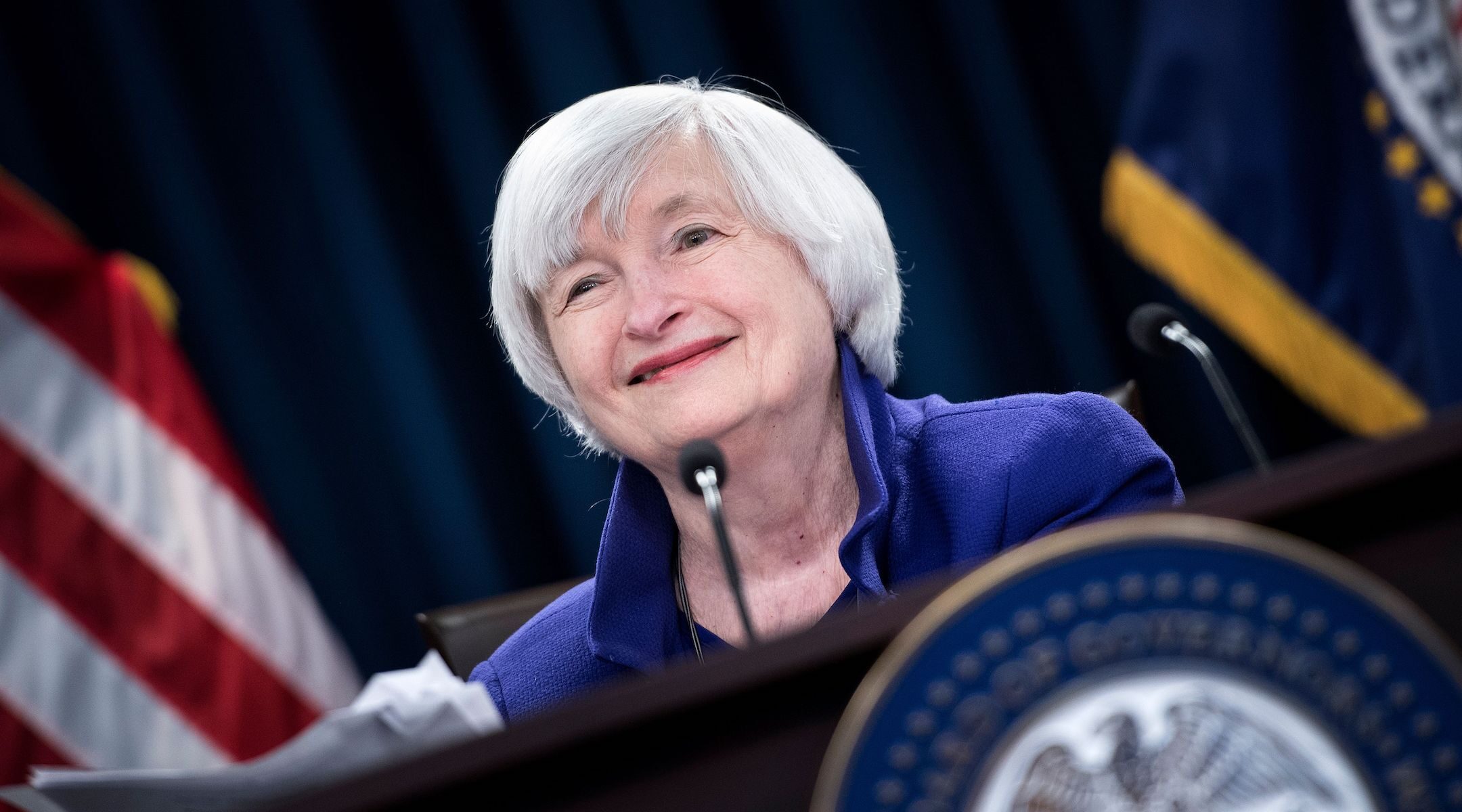 Janet Yellen speaks during a briefing at the Federal Reserve in Washington, D.C., Dec. 13, 2017. (Brendan Smialowski/AFP via Getty Images)
Advertisement

(JTA) — President-elect Joe Biden announced on Thursday that he has made his pick for treasury secretary and that he’ll announce the choice around Thanksgiving. He added that he thinks the pick will be “accepted by all elements of the Democratic Party,” from the “progressive to the moderate coalitions.”

Janet Yellen, the pioneering Jewish economist who was the first woman to head the Federal Reserve, is on Biden’s shortlist, according to multiple reports. (The other Jewish woman on the list is Sarah Bloom Raskin; read about her here.)

Here’s what you need to know about Yellen.

She’s one of the most respected people in her field

Yellen, 74, began her career in academia before joining the board of governors of the Federal Reserve, the central bank that controls monetary policy, in 1994. She worked for President Bill Clinton as a member of the Council of Economic Advisers in the late 1990s. Then in 2004, the Bay Area resident — her Jewish husband and fellow economist George Akerlof taught at the University of California, Berkeley — became president of the Fed’s San Francisco branch.

President Barack Obama appointed her as vice chair of the Federal Reserve in 2010, before elevating her to chair in 2013, replacing fellow Jewish economist Ben Bernanke.

Her career has earned praise from all sides — for example, even though President Trump declined to give her another term as Federal Reserve chief in 2017 (he told The Washington Post that he was partly “hung up” on the fact that she is only five feet tall), he called her a “wonderful woman who’s done a terrific job.” Elizabeth Warren, the progressive senator who wants more regulation of the economy, praised her at the time as well.

That’s likely because inflation and unemployment declined during her tenure. She also spoke out early about the danger of subprime mortgages, which helped lead to the 2008 financial collapse. She’s a Keynesian — meaning she believes in taking proactive government action to combat market volatility — and is called a “dove,” which in economic terms means she is more concerned with unemployment than inflation and is less likely to hike interest rates.

She would be the first woman to serve as treasury secretary

If chosen, Yellen would make history again as the country’s first female head of the treasury. But she wouldn’t be the first Jewish person in the post.

That honor goes to Henry Morgenthau, Jr., the New Yorker who in the 1930s and 40s was involved in shaping President Franklin Roosevelt’s New Deal, financing the country’s World War II efforts and helping large numbers of Jewish refugees immigrate to the U.S. after war.

Other Jews who have recently served in the role include Robert Rubin and Lawrence Summers, who both worked under President Clinton; Jack Lew, who served under Obama; and Steven Mnuchin, who is currently finishing up his term under President Trump.

She has Jewish parents and mentors

Yellen was born to “not particularly observant” Polish Jewish parents and grew up in Brooklyn. At Yale, she was mentored by Jewish professors Herschel Grossman and Joseph Stiglitz, a Nobel prize winner.

While she and Akerlof lived in Berkeley, they were members of a local Reform synagogue, Congregation Beth-El. The Forward reported that their only son went to preschool there.

She has featured in “globalist” theories involving Jews

In 2016, Trump released a campaign ad that drew condemnation from the Anti-Defamation League, the Union for Reform Judaism and other Jewish groups. In the ad, Trump spoke about who controls the “levers of power in Washington” and “global special interests” as images of Jewish billionaire philanthropist George Soros and Yellen appeared.

Critics said it played on old anti-Semitic tropes — which also happened to be invoked against the first Jewish head of the Fed, Eugene Meyer, in 1930, as a 2013 JTA article points out.

Meyer’s appointment as Fed chief was not greeted warmly by Rep. Louis McFadden (R-Pa.), chairman of the House banking and currency committee. McFadden, who was a rabid anti-Semite, blasted Meyer as an “international banker,” connecting him to the Rothschilds. “If you want to turn the Federal Reserve System over to international financiers, place Eugene Meyer in that particular post at this time,” McFadden said. [President Herbert] Hoover and leading Republicans in Congress, however, rallied to Meyer’s defense.

What this choice could mean

Biden’s statement Thursday sent a signal to the more liberal wing of his party that he is listening to them. One of their demands is greater urgency on climate change policy.

Yellen has been out front on the issue, saying that the U.S. should implement a carbon tax to curb harmful emissions.

“What I see is a growing recognition on both sides of the aisle that climate change is a very serious concern and that action needs to occur,” she told Reuters last month.