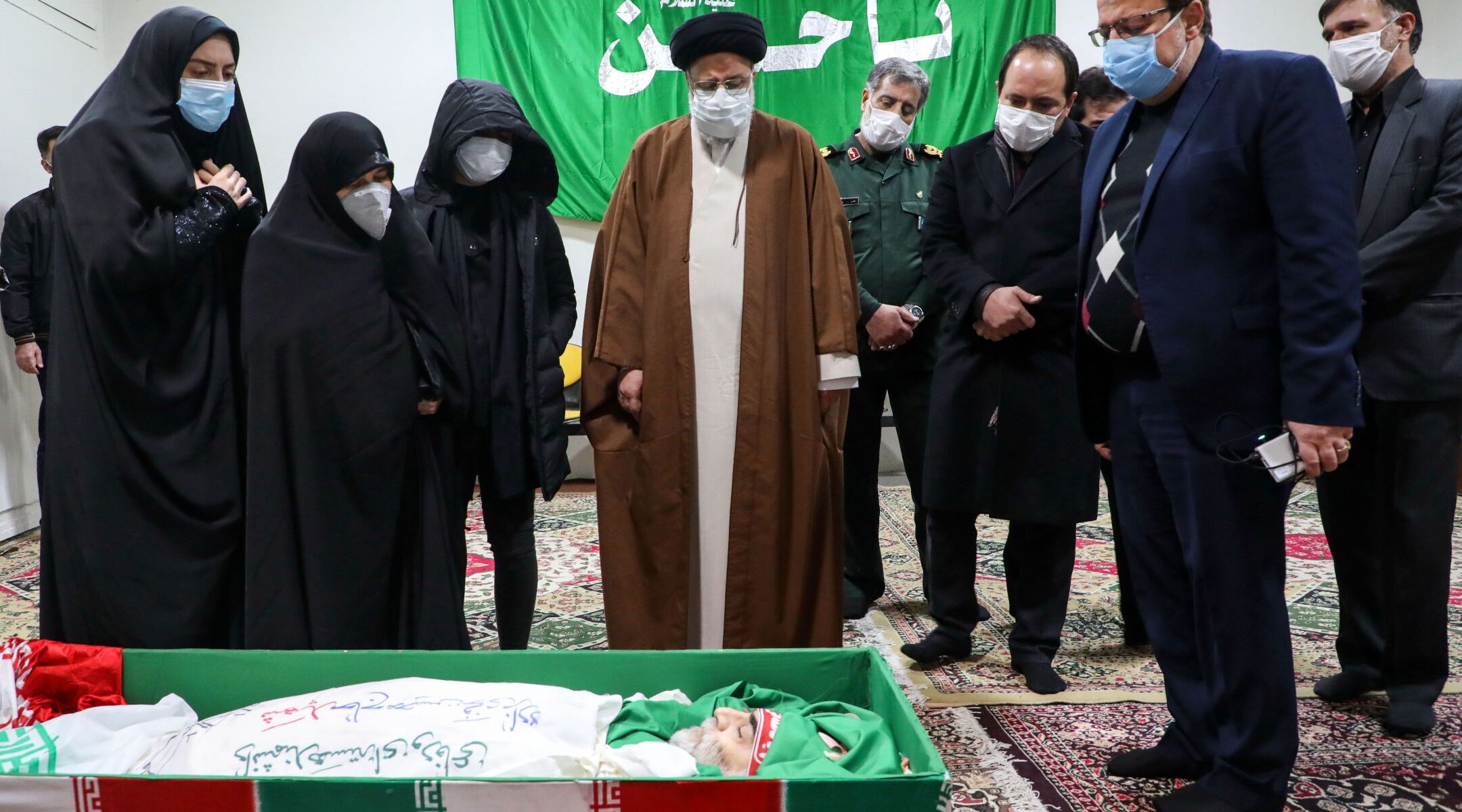 WASHINGTON (JTA) — The simmering fear among Middle East watchers that President Donald Trump might attack Iran in the waning days of his presidency was inflamed on Friday when assassins shot to death the man believed to be responsible for Iran’s nuclear weapons program.

No one has claimed responsibility for killing Mohsen Fakhrizadeh. Iran’s foreign minister has blamed Israel, whose prime minister, Benjamin Netanyahu, said in 2018 about Fakhrizadeh, “Remember that name,” and Israeli officials have declined to comment.

That leaves international observers assuming that Israel was behind the attack and wondering whether tensions between Iran and the United States and Israel could blow up in the next few weeks.

“Any member of Congress should be concerned about a potential U.S. or Israeli strike on Iran at this point,” said a senior Democratic congressional staffer who asked for anonymity to speak frankly.

Here’s what you need to know about the tensions, what’s driving the three countries’ leaders and the scenarios that might unfold over the coming weeks.

What exactly is going on, anyway?

On Friday, according to Iranian media reports, the vehicle in which Fakhrizadeh and his wife were traveling came under automatic fire, and a nearby truck exploded. Some reports said the attack was carried out by remote control.

The killing comes against mounting indications that Trump and Netanyahu are thinking about striking Iran’s nuclear reactor at Natanz.

Just two weeks ago Trump reportedly contemplated a strike on Iran’s main nuclear site, and Axios is reporting that Israel is taking steps to be ready for such a strike. Meanwhile, U.S. Secretary of State Mike Pompeo is leading the charge to intensify the application of sanctions on Iran that are designed to be difficult to undo for President-elect Joe Biden.

Last week, Netanyahu met in Saudi Arabia with Pompeo and Saudi Crown Prince Mohammed bin Salman. Mossad chief Yossi Cohen accompanied Netanyahu, leading some pundits to speculate that the Israelis were briefing the Saudis and the Americans ahead of the attack on Fakhrizadeh.

Would Trump really want to attack Iran in the final weeks of his presidency?

Yes and no. On the one hand, Trump and his administration are reportedly trying to set so many diplomatic fires that Biden will have a hard time extinguishing all of them. And on Iran, the differences between the two men could not be clearer.

Both are concerned about Iran’s accumulation of nuclear material. But Trump does not want Biden to return to the Iran nuclear deal for which Biden advocated as vice president under Barack Obama, who inked the 2015 agreement. The outgoing president is taking steps to obstruct his successor, most notably with an intensified sanctions regime. The most potent way of scotching a return to the Iran deal would be to launch a conflict with Iran.

The most consequential step Trump can take is to order a strike on Iran — the kind he reportedly contemplated two weeks ago on Natanz. His aides talked him out of it.

Trump would not be serving his own goals by contemplating a strike, said Martin Indyk, a Council on Foreign Relations fellow who has served in senior diplomatic positions in Democratic administrations and been a fierce critic of Trump.

“If you watch him carefully, he’s more concerned about establishing his legacy, which is to bring the troops home,” he said. “There is a contradiction between bringing the troops home and a war in the Middle East.”

But Trump has been known to act impetuously in matters of international significance.

Wait, can he really do that?

If Trump changes his mind and orders a strike, there’s likely little recourse for Congress to stop him. Presidents since 2001 have used the broadly written Authorization of the Use of Military Force passed by Congress following the 9/11 attacks to launch myriad attacks in the Middle East. Democrats in recent years have sought to limit that authorization, but those efforts are stuck in the Republican-led Senate.

Trump would relay a strike order to his secretary of defense, who then would send it to the appropriate commanding officer. In September, Trump fired Mark Esper, a defense secretary who on occasions had resisted the commander-in-chief’s orders, and replaced him with Christopher Miller, of whom little is known, as part of a broad push to install loyalists at the end of his term.

Neither Miller nor the commanding officer would have the standing to refuse to carry out a legal order. On the other hand, they are required to refuse an illegal order.

Would an order to strike Iran be illegal? International law requires a credible threat as a predicate for a strike and has measures against hitting civilian targets. Iran says it has no nuclear weapons program and that its nuclear sites are for civilian use.

Should someone in the U.S. chain of command refuse to carry out the strike, its proponents would no doubt counter that Western intelligence agencies have assessed that Iran has sought nuclear weapons in the past and that a nuclear-armed Iran poses a credible threat. Still, the ensuing back-and-forth could delay a strike until Biden assumed the presidency.

What does Biden think about this all?

The president-elect’s outlook on Iran is centered on a pledge to return to the nuclear deal struck under the Obama administration, with improvements. As vice president, Biden was a leading salesman for the deal, which traded sanctions relief for rollbacks of Iran’s nuclear program.

Biden, who stands to inherit the blowback on top of the already vexing question of how to handle U.S. relations with Iran, has not commented on the recent events. He “firmly believes in the principle that there must be only one president at a time guiding our country’s foreign policy and national security and is focused on preparing to govern, which is why we’ll decline to comment at this time,” Ned Price, a spokesman for the transition, said in an email response to a query about Biden’s Iran policy.

But Biden insiders have been telling congressional staffers and foreign policy mavens to closely read two op-eds appearing in the weeks before the election to understand Biden’s Iran intentions.

One, “There’s a smarter way to be tough on Iran,” appeared in September on CNN’s website with Biden’s byline. It argues that Iran deserves tough consequences, but that these backfire if the United States fails to coordinate with European and Asian allies, as Trump has done. Biden also wants Iran to end its adventurism in the region, but also pledges to immediately pull back some sanctions, particularly those affecting coronavirus relief.

The other op-ed, “On Iran, the Next Administration Must Break With the Past,” was published in Foreign Affairs in August and co-authored by three people, including two Obama administration Iran policy alumni. One of its central arguments is that the next president should consult with Israel and Sunni Arab allies while negotiating the deal — which Obama failed to do — and should run parallel talks on non-nuclear issues, including Iran’s missile program and its regional adventurism.

Does Netanyahu really want a war with Israel’s most potent neighbor?

Again, yes and no. On the one hand, the prime minister is contending with low popularity — so low that he likely would not retain power if elections were held today — and a successful attack against Israel’s most formidable foe could burnish his status among Israelis. Netanyahu also knows that any kind of military strike against Iran will be less likely under Biden, so he may be pressing for intervention now.

But Israel’s security establishment has been wary for years of an open-ended, full-blown conflict with Iran. It stayed Netanyahu’s hand in 2010 and 2011 when he contemplated a strike, and one of the naysayers, then-military chief of staff Gabi Ashkenazi, is now the foreign minister in Netanyahu’s Cabinet.

Trump has other options if he wants to strike Iran, including assassinations and cyberattacks of the kind that the Netanyahu and Obama governments worked together on in the early years of the Obama administration, and for a time crippled Iran’s uranium enrichment capabilities.

Netanyahu has the same options as Trump — a strike and deniable lower-intensity attacks such as assassinations and cyber warfare — and the same ostensible interest in pushing Iran into a defensive posture that would frustrate a return to the nuclear deal.

The Israeli has a further deterrent that Trump does not: Netanyahu not only needs to work with an incoming Biden administration, the prime minister would need Biden’s unrestrained backing if whatever action he launches escalates into a war.

Biden might be less than willing to fully support Israel if Netanyahu is seen as triggering the war. Moreover, Trump’s determined efforts to cripple an incoming Biden administration would likely hobble whatever effective action the United States would take on Israel’s behalf.

Bad blood with the incoming president would also damage Netanyahu’s political standing at a precarious time for his leadership, said Indyk.

“He’s thinking of another election,” Indyk said of Netanyahu while noting that despite his flirtations with a strike on Iran a decade ago, Netanyahu has been among Israel’s least trigger-happy prime ministers.

“He always has been cautious about the use of force,” Indyk said. “He knows where it starts, and he also knows he does not know where it ends.”

The next several days will be pivotal in revealing how far Trump and Netanyahu plan to go at this time — and whether Iran will carry out the retribution for Fakhrizadeh’s murder, which could force their hand. Iran is feeling the economic crunch of sanctions, and the government of President Hassan Rouhani has indicated that it is ready to return to the 2015 nuclear deal.

On the other hand, the assassination has exposed Iran’s internal security apparatus as weak and vulnerable to penetration. Iranian hard-liners may press the country’s spiritual leader, Ayatollah Ali Khamenei, to save face, however much it risks an escalation.