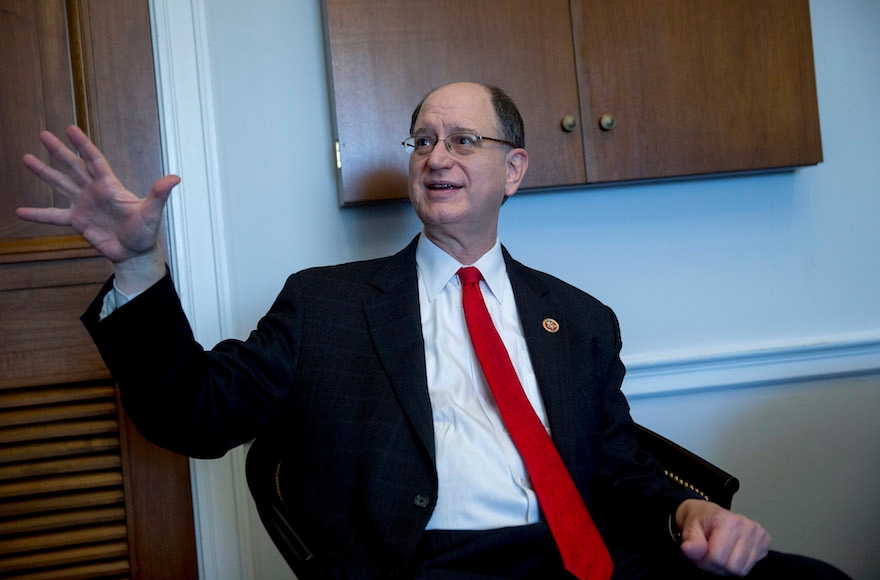 Representative Brad Sherman, a Democrat from California, talks to his communications director in his office on Capitol Hill, Nov. 4, 2015. (Andrew Harrer/Bloomberg/Getty Images)
Advertisement

WASHINGTON (JTA) — Influential U.S. House of Representatives Democrats, including one who has for years been close to the center-right pro-Israel community, are backing president-elect Joe Biden’s plan to reenter the Iran nuclear deal — without any new conditions on the country.

In a letter obtained by the Jewish Telegraphic Agency that began circulating Wednesday afternoon, the lawmakers support Biden’s vision in direct contradiction to the urgings of the American Israel Public Affairs Committee, others in the center-right pro-Israel community and Israeli Prime Minister Benjamin Netanyahu.

Those groups want Biden to at least renegotiate components of the deal, if not forge a new deal, before rejoining the 2015 Joint Comprehensive Plan of Action, which relieved sanctions on Iran in exchange for restrictions, monitored by outside observers, on the country’s nuclear program.

“We strongly endorse your call for Iran to return to strict compliance with the nuclear deal, the United States to rejoin the agreement, and subsequent follow-on negotiations,” says the letter. It is being circulated by three Democrats who galvanized their colleagues to support the deal in 2015: Jan Schakowsky of Illinois, David Price of North Carolina and Barbara Lee of California.

The intended effect of the letter, which the lawmakers hope will draw the support of most of the Democratic caucus, is to reassure Biden that he can leap back into the deal without fear of pushback, at least in the House.

Already signed on are several House members with pro-Israel records, including Brad Sherman of California, a Democrat who has longstanding ties to the center-right pro-Israel community and who helped found The Israel Project in the early 2000s. Also circulating the letter are Abigail Spanberger, a hawkish Democrat from Virginia; Gregory Meeks of New York, the incoming chairman of the Foreign Affairs Committee; and Joaquin Castro, a Texas progressive.

Sherman and Castro vied with Meeks to chair the Foreign Affairs Committee. Having the three sign onto the letter signals that support for reentry traverses intra-party divisions.

Biden announced last week that he was ready to enter the deal without preconditions as a means of containing Iran’s accelerated nuclear push, which was triggered by President Donald Trump’s 2018 withdrawal from the deal and the intensive sanctions that he imposed. Iran’s economy is in dire straits as a result, but the sanctions have not hindered Iran’s nuclear program. Neither Iran or the United States is now in compliance with the deal, and under Biden’s terms — welcomed by Iran’s government — both nations would have to return to compliance.

Biden said he was ready, after reentering the deal, to negotiate elements missing from the deal that troubled Israel and Sunni Arab nations, including Iran’s missile program. The original deal did not address non-nuclear weaponry at all.

The center-right pro-Israel community, particularly AIPAC, has clamored for Biden to amend the deal before reentering or replace it with another more comprehensive deal.

“Use leverage achieved via sanctions to #FixTheFlaws and reach a broad deal with Iran,” AIPAC said Wednesday in a tweet.