‘I don’t hate you’: Rashida Tlaib defends her relationship with Jews on a panel on anti-Semitism 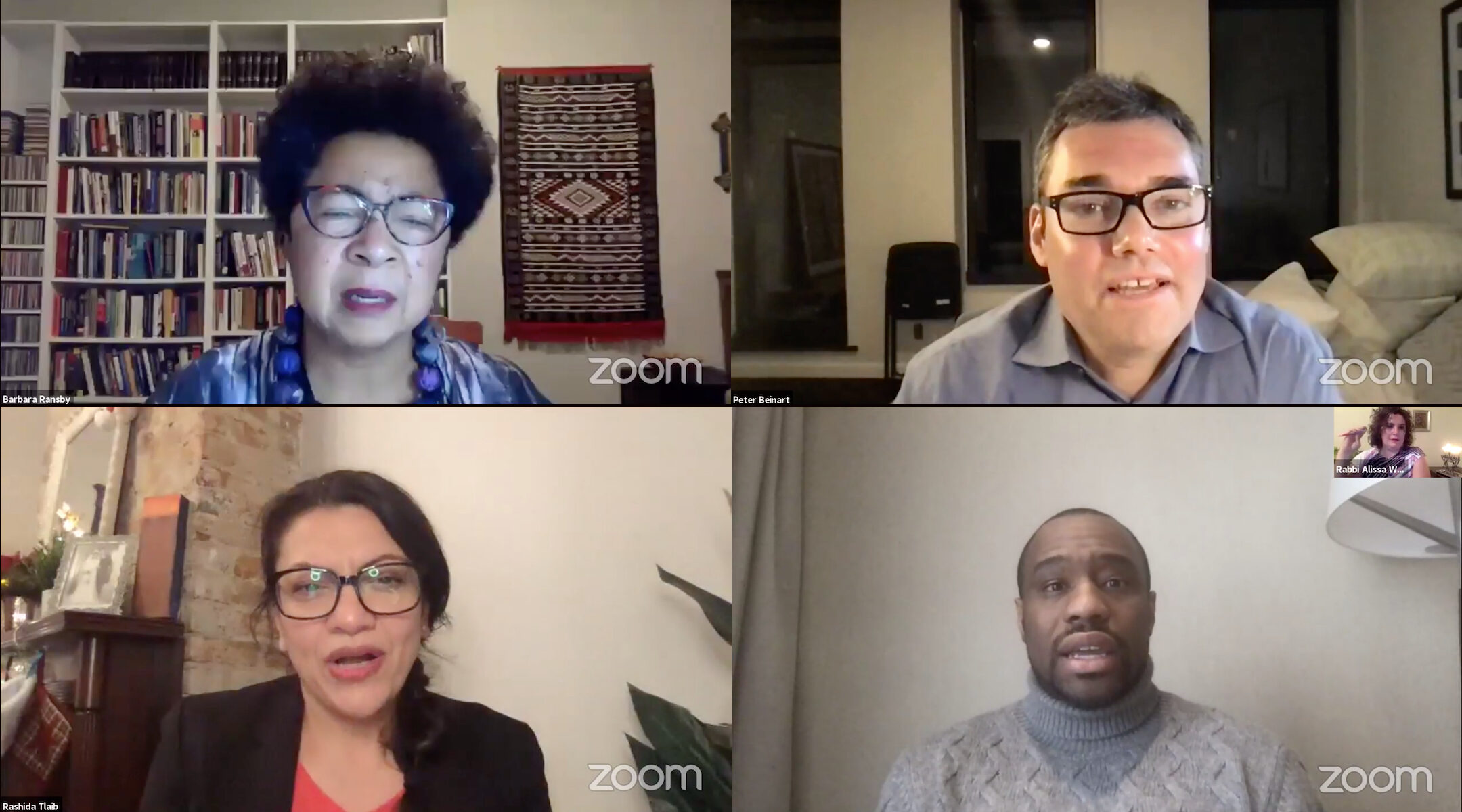 (JTA) — At a panel on anti-Semitism, four speakers known for their outspoken criticism of Israel — including Rep. Rashida Tlaib — said that they themselves do not hate Jews.

“Tell everybody, I don’t hate you. I absolutely love you,” said Tlaib, a Palestinian American and Democrat from Michigan who supports the movement to boycott Israel. “If anybody comes through my doors or through any forum to try to push anti-Semitism forward, you will hear me being loud with my bullhorn to tell them to get the hell out.”

The panel had sparked substantial criticism from Jewish commentators and pro-Israel activists when it was announced, both for giving anti-Zionists a platform to discuss anti-Semitism and for being majority non-Jewish. Bari Weiss, the former New York Times opinion writer and editor, tweeted, “So ‘dismantling antisemitism’ is actually about dismantling *accusations* of antisemitism.”

An all-Jewish panel with a similar title, called “Dismantling Anti-Semitism: Jews Talk Justice,” is being hosted the night after by the Combat Anti-Semitism Movement, a coalition of nearly 300 groups, most of them Jewish.

Tuesday’s panel, hosted by the political and advocacy arm of the anti-Zionist group Jewish Voice for Peace, included, along with Tlaib, Marc Lamont Hill, a Temple University professor; Barbara Ransby, a University of Illinois at Chicago professor; and Peter Beinart, a Jewish essayist known for his writing on Israel.

Hill and Ransby have also endorsed the movement to boycott, divest from and sanction Israel, known as BDS. Beinart recently made waves for an essay calling for a single, binational Israeli-Palestinian state in place of Israel, a stark departure from his decade of advocacy for a two-state solution. Tlaib supports a binational state as well.

The panelists on Tuesday all rejected the notion that pro-Palestinian advocacy, including support for an Israel boycott, constitutes anti-Semitism. They all said that anti-Semitism comes predominantly from the right, and agreed that it is best fought by allying with other oppressed groups in solidarity.

“Palestinians that advocate for Palestinian rights are not the enemy, those of us who advocate for BDS as a strategy to advance the rights of disenfranchised and exiled Palestinians are not the enemy,” Ransby said. “The enemy is the kind of people who go into a synagogue in California, north of San Diego, and open fire to do deadly damage,” a reference to the synagogue shooting in Poway, California, last year.

“In a fundamental way, of course, we want a more just world for everyone,” she added later.

The event included plenty of criticism of Israel’s treatment of Palestinians. At one point, Ransby likened the dilemma over criticizing Israel while fighting anti-Semitism to the dilemma African-American leftist activists faced over whether to criticize Robert Mugabe, the Zimbabwean anti-colonial activist who became a dictator.

“My side of the debate argued that, no — that we had an obligation to speak out because we had understood the struggle that he came out of,” she said. “Obviously there are historical differences, but I think of that in terms of how we view the silencing around discussing Israel and who has a right to critique and who has an obligation to critique.”

The panel did include acknowledgement of anti-Semitism on the left. Hill, who was unable to attend the live event because of his father’s death but shared prerecorded responses, praised Jews who had worked with him in activist movements and said people need to call out anti-Semitism in their own ideological camps.

“I not only became aware of anti-Semitism as an idea, but I began to hear it and see it in practice,” he said. “There were moments when I would be in movements or be in meetings, I’d be reading a book or pamphlet or literature and I would hear the way Jewish people were being smeared.”

Beinart, who has argued for years that the Jewish community needs to welcome anti-Zionists, said he believes that, by the same token, “Zionist Jews should not be excluded from progressive spaces.” He also spoke of the need to combat anti-Semitism on the left.

“It’s very important that as we fight against the greatest anti-Semitic threat, which is the threat from the white nationalist right, that we also show a great concern to make sure that progressive movements are not tainted by anti-Semitism,” he said.

Beinart later defended the credentials of his co-panelists, who have all been accused of anti-Semitism for their views on Israel.