Fears of violence simmer as Trump supporters, including anti-Semitic extremists, descend on DC 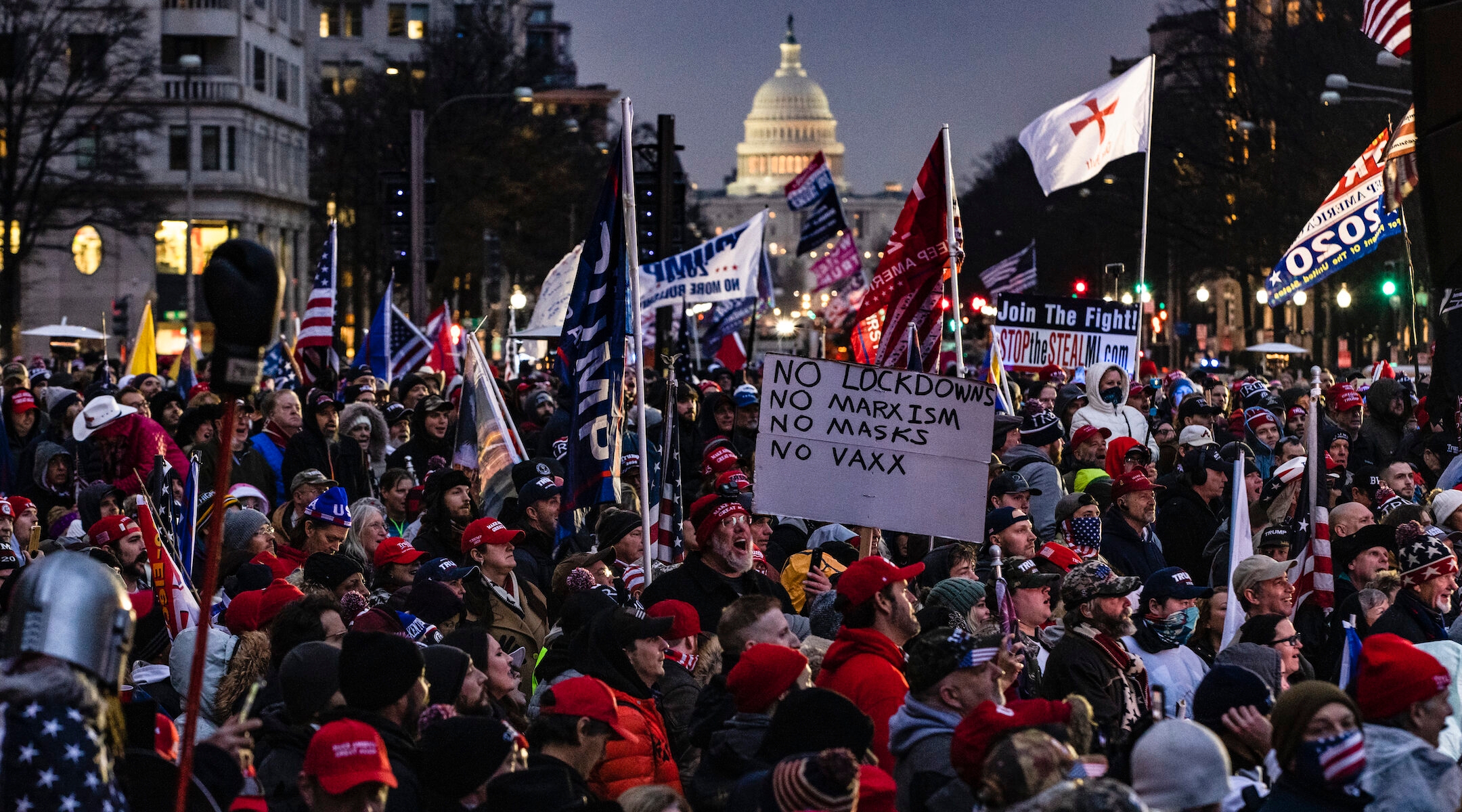 Supporters of President Donald Trump gather for a rally at Freedom Plaza in Washington, DC on January 5, 2021. A string of extremists are expected at the rally. (Samuel Corum/Getty Images)
Advertisement

(JTA) — Once again, diehard supporters of President Donald Trump are gathering for a mass protest of the election results in Washington, D.C.

Once again, extremist groups will be among them, and may be violent.

And once again, anti-Semitism analysts will be watching  — though they stress that they don’t know of any specific threats against Jews or Jewish institutions.

“The concern for violence is always number one when you know extremists are showing up or talking about showing up to an event,” said Oren Segal, vice president of the Anti-Defamation League’s Center on Extremism. “The second concern is that this is a broader illustration of how disinformation is animating people to action.”

The March to Save America Rally, planned for Wednesday but in reality already underway, will be the third mass protest pro-Trump activists have held in D.C. against November’s election results. Despite the certified vote totals and a slew of court rulings affirming them, the protesters claim without evidence that the election was fraudulent and that Trump was the real winner. Trump has tweeted that he plans to make an appearance at Wednesday’s event.

The rally will take place on the day when Congress and Vice President Mike Pence are legally required to ratify the electoral vote count. A group of Republican senators and congresspeople is expected to vote against the certification, and President Trump is pressuring Pence to use powers (which he does not possess) to change the count and declare Trump the winner. But constitutional scholars expect the challenges to fall flat.

The last mass pro-Trump demonstration in the capital, on Dec. 12. acted as a hub for far-right extremists and a breeding ground for violence, as four people were stabbed. The leader of the Proud Boys, a right-wing extremist group, publicly boasted that the group torched a Black Lives Matter sign at an African-American church. He was arrested Monday for the torching.

Wednesday’s event is being touted on social media by a string of far-right extremists, from the Proud Boys to right-wing militias to Nick Fuentes, head of the white supremacist Groyper Army.

Supporters of the pro-Trump QAnon conspiracy theory, which is laced with anti-Semitic tropes, are also promoting the rally. Orthodox Jews who support the president are also organizing bus rides to the rally, according to journalist Jacob Kornbluh.

Already, a pre-rally on Tuesday in Washington D.C. featured anti-Semitic dog whistles, such as when one speaker told the crowd,”We are standing up against the evil globalists such as George Soros, who thinks he owns our politicians, who thinks he owns Chief Justice John Roberts on the Supreme Court.” (Soros, the progressive financier, has become a leading target of anti-Semitism on the right, while the term “globalist” is seen by some as an echo of anti-Semitic tropes about a Jewish conspiracy to control the world.)

“I’d be shocked if we didn’t see some street violence,” said Heidi Beirich, co-founder of the Global Project Against Hate and Extremism, referring to Wednesday’s event. “They’ve got to be starting to feel really, really desperate that there’s no way Trump will get into office, so we’ll see how much that anger shows itself. I’m sure D.C. is sick to death seeing white supremacists, Proud Boys, and MAGA people taking over their city every couple weeks.”

Ahead of the election, a range of government agencies and extremism watchdogs issued warnings that violence could occur on or after Election Day. While those scenarios have mostly not come to pass, Trump supporters have been arrested in several instances for breaking the law or planning attacks after echoing rhetoric about the election being stolen.

An additional danger, Segal said, is that the rallies give extremists the opportunity to mingle with, and appeal to, fervent Trump supporters who haven’t subscribed to extremist ideologies. The grievances invoked at the rally, he said, could push people in that direction.

“When people feel that something has been taken from them, they will look for answers, will look for ways to remedy that,” he said. “And if the only remedy they’re seeing, the one that’s closest at hand, is Alex Jones, the Proud Boys or some hate monger, they may be inclined to explore that further.”

In advance of the rally, D.C. Mayor Muriel Bowser advised residents of the city to “stay out of the downtown area on Tuesday and Wednesday and not to engage with demonstrators who come to our city seeking confrontation.” Per that guidance, a Jewish community center less than a mile from the White House will be closed on Wednesday.

“In similar recent events, white supremacists and militia groups have created conflict and provoked violence, creating harm for individuals and to our institutions,” the District of Columbia Council said in a statement this week. “We urge residents to recognize these are the voices of those who have already lost.”

Michael Masters, CEO of the Secure Community Network, which coordinates security for Jewish institutions nationwide, said that his organization did not know of any threats to Jews in the area. He said that while the gathering of extremists is concerning, it’s not equivalent to the 2017 far-right rally in Charlottesville, which was explicitly white supremacist.

“Charlottesville was a directed white supremacist, neo-Nazi effort,” Masters said. “I think the motivation behind the upcoming rally this week is very different than the identifying motivator behind Charlottesville.”

Given the mix of circumstances and fringe groups, Beirich said that it’s impossible to predict what might happen on Wednesday.

“This is a very volatile mix of very dangerous people with dangerous ideas,” she said. “So you just don’t know.”