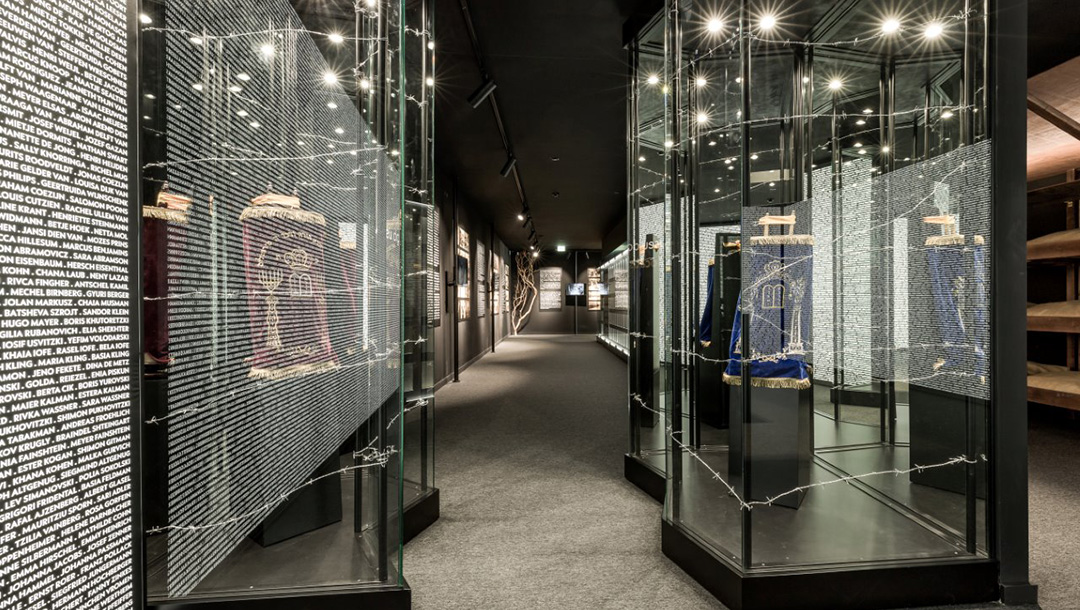 The interior of the Holocaust Museum of Porto, Portugal, in January 2021. (Courtesy of the Jewish Community of Porto)
Advertisement

(JTA) — Portugal is set to open its first Holocaust museum, built in the northern city of Porto by members of a Jewish community that was founded by descendants of victims of the Inquisition.

The Holocaust Museum of Porto was developed in cooperation with the Jewish Museum and Tolerance Center in Moscow and other institutions. It will open on Jan. 20, the Jewish Community of Oporto, an organization representing local Jews, said in a statement, and expects to receive 10,000 visitors a year when emergency restrictions connected to the COVID-19 pandemic are lifted.

On Jan. 27, International Holocaust Remembrance Day, students from across Portugal will visit the museum, the statement said.

The museum features a reproduction of Auschwitz prisoner barracks, a memorial room with walls carrying the names of Holocaust victims and a study center.

The Inquisition, a campaign of religious persecution on the Iberian Peninsula that began in Spain in 1492, was applied also in Portugal in 1536. It ended Jewish life in Porto and across the region as hundreds of thousands of Sephardic Jews fled both countries. Those who remained practiced Judaism in secret. Their descendants are known as bnei anusim.

Organized Jewish life in Porto reappeared in the 1920s thanks to Artur Carlos de Barros Basto, a descendant of the bnei anusim and army captain who helped promote Jewish life in and around Porto. Consequently he was thrown out of the army and labeled a pedophile on false charges in an anti-Semitic conspiracy. With his downfall, Jewish life in Porto suffered a setback.

In the 1940s, many thousands of Jewish refugees from further east in Europe passed through Portugal, which was neutral during World War II, and escaped from there to the United States and prestate Israel. Aristides de Sousa Mendes, a former Portuguese consul general serving in France, issued thousands of life-saving visas to Jews fleeing Nazi-occupied Europe.

In the early 2000s, multiple bnei anusim from Porto completed Orthodox conversions to Judaism, including the former leader of the community, Jose Ferrao Filipe.

The community also has members descended from Ashkenazi Jews who lost relatives in the Holocaust, including the community organization’s treasurer, Michael Rothwell.

“My grandparents were good German patriots,” he wrote in the statement, but with Nazism ”they found themselves accused of unwanted foreigners, they were transported like cattle to Auschwitz, separated from each other, targets of all the violence and there they died.”

Portugal today has about 3,100 people who self-identify as Jews — a 75% percent increase over 2001, according to a 2020 report on Jewish demographics in Europe by the London-based Institute for Jewish Policy Research. The Jewish Community of Porto says it now has about 400 members, compared to a few dozen a decade ago. Porto has about 200,000 residents in total.

The influx is connected to immigration from elsewhere in Europe and Latin America, as well as Portugal’s 2015 law guaranteeing citizenship to descendants of Sephardic Jews that was passed to atone for the Inquisition. Spain passed a similar law later that same year.

The Jewish communities of Porto and Lisbon vet citizenship applications for the government, charging hundreds of dollars per application. There have been more than 76,000 applications, and about 30% have been approved.

The Porto community, which a decade ago could not afford to fix its cracked synagogue ceiling or hire a rabbi, in recent years has renovated its synagogue, hired a full-time rabbi, opened a Jewish museum and last year produced a $1 million documentary on de Barros Basto.

Dignitaries and diplomats from several countries will attend the opening of the latest addition to the community’s institutions, the Holocaust Museum of Porto, the community said. A community spokesperson declined to say how much the museum, which is located in the central Arrabida area, cost to build and what its annual budget will be.

The museum project benefited from “a substantial donation from a Portuguese Sephardic family from South East Asia,” Rothwell said in the statement, which did not name the family.