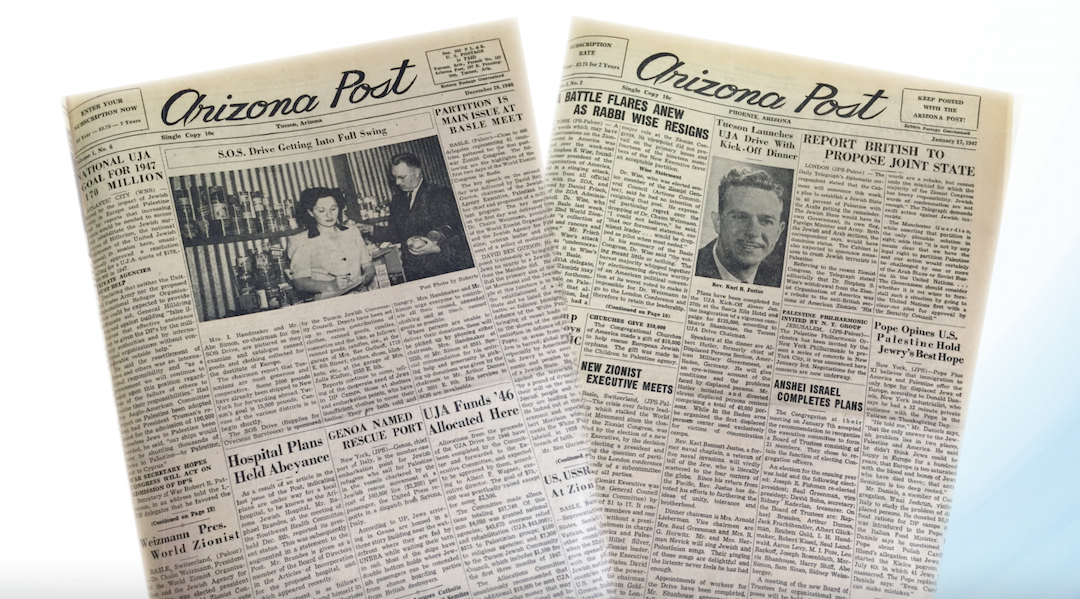 The Jewish Community Federation of Southern Arizona, which owns and operates the Post, announced the closure in an email to subscribers this week. The letter cited declines in ad revenue and readership, loss of philanthropic support and the COVID-19 pandemic as factors that contributed to the Post’s “unsustainable position.”

The letter was signed by the federation’s CEO, Graham Hoffman, and COO, Lindsey Baker, who noted that “our community’s communications,” including “local stories, lifecycle events, and obituaries,” would “be delivered via alternative vehicles.”

Maya Horowitz, the federation’s director of marketing, communications and events, told the Jewish Telegraphic Agency that the alternative vehicles would likely include social media posts, print materials and community emails “that are not under the auspices of the AJP.” The paper’s records will be preserved in an archive, Horowitz said.

“The Arizona Jewish Post is a beloved and important publication that has played a meaningful role in the history of news in our Southern Arizona community,” Baker told JTA in an email. “In recent years, it has faced many of the same budgetary pressures that newspapers around the country and world have related to the shifting journalistic landscape, which were heightened by the global pandemic.

“Despite our best efforts to shift our model, including reducing staff and converting to an all-digital offering, we were not able to create a sustainable revenue stream that would carry the AJP into the future.”

Hoffman added that the federation’s board and professional staff had made “extraordinary efforts” to save the publication.

The paper had only one remaining editorial staffer, Executive Editor Phyllis Braun. Although the federation said it would continue operating the paper through March 1, Braun said she has already been laid off.

“I’m still processing it because I was there for so long,” Braun, who had been with the Post for nearly 25 years, told JTA. “I am sad not only for myself but for the community because I know the paper will be missed.”

Braun cited the paper’s ability to weather the 2008 financial crisis — the Post had to cut staff hours to survive — as one of her proudest moments.

The paper’s closure is the latest in a growing number of local Jewish news outlets that have shuttered or drastically scaled back operations since the beginning of the COVID-19 pandemic. In the last year, the Jewish Advocate in Boston and Canadian Jewish News have also closed down (CJN recently relaunched as an online-only publication). The New York Jewish Week also closed its print edition in 2020, and was acquired by JTA’s parent company, 70 Faces Media, in January.

Founded in 1946 by Rebecca and Meyer Rutz as the Arizona Post, the paper operated under independent ownership for its first 21 years. In 1965 it was sold to the Tucson Jewish Community Council, the precursor to the local federation. The word “Jewish” became part of the paper’s name in 1990.

The Post published a biweekly print edition 24 times per year, beginning with Rosh Hashanah 1946, and launched its website in 2010. In July 2020, the paper ended its print edition, relaunching in September as an online-only publication.

The Tucson area is home to some 25,000 Jews, according to a 2002 population survey, the most recent survey conducted in the area. The Jewish News of Greater Phoenix, which covers the substantially larger (and growing) Jewish population in Northern Arizona, remains active and is independently owned.

“We do not see this as an end,” Hoffman said, “but simply a shift of direction with significant opportunity to better reach our cherished constituents.”