He grew up in one of Rio’s most violent favelas. Now he’s an on-the-rise artist in Israel. 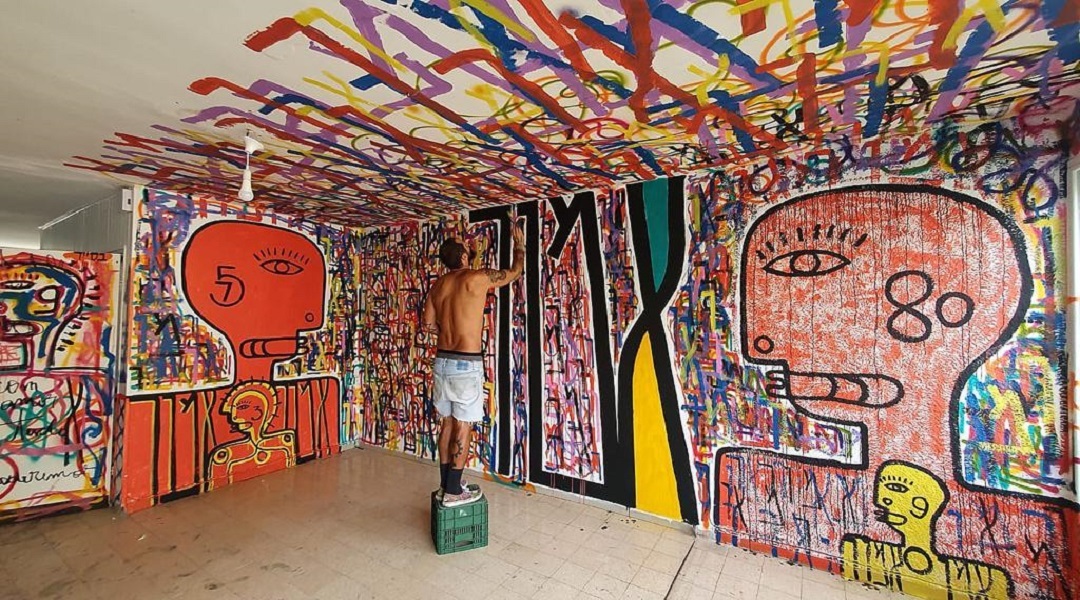 Alander Especie at work in a building in Raanana, Israel, his adopted home. (Courtesy of Especie)
Advertisement

RAANANA, Israel (JTA) – What caught Crystal Frant’s eye about the Rastafari skater she spotted on the beach outside Rio de Janeiro back in 2006 wasn’t his muscular body or his dreadlocks. It was the hand-sized Star of David among his several tattoos.

“Do you think he’s Jewish?” she asked a friend with excitement.

The Rio-born Frant knew that many Israeli backpackers came through the region during Carnival, and having just returned to Brazil from a 10-day Birthright trip to Israel, she hoped he might have been one of them.

As it turned out Alander Especie, who was raised in a Rio slum, was not Israeli or Jewish — but he did turn out to be Frant’s bashert, the Yiddish word her Polish and Romanian grandparents used for soulmate.

“You must go to Israel someday,” she told him during that first encounter on the beach.

Nearly 15 years later, Especie has not only visited Israel but lives here. Along with Frant and their two sons, the up-and-coming artist made aliyah in 2016 and now works as a teacher’s aide while trying to beautify his adopted city of Raanana.

“It was not just stam,” Especie told the Jewish Telegraphic Agency, using the multipurpose Hebrew word that translates to by chance. “I strongly believe it was all destined to happen.”

Raanana, an upscale Tel Aviv suburb much sought-after by English-speaking immigrants, is a far cry from his native Vila Vintem, one of Rio’s most violent and vulnerable favelas plagued by extreme poverty and drug traffic factions. That’s where Especie was born 44 years ago, to a family living in a 100-square-foot wooden shack that sunk into mud and clay when it rained.

“We used to hide under the bed to protect ourselves from shooting sprees. We often had to skip over dead bodies to enter our home,” he said. “Today, I think of that like a war drill here in Israel, when we are supposed to hide in bunkers.” 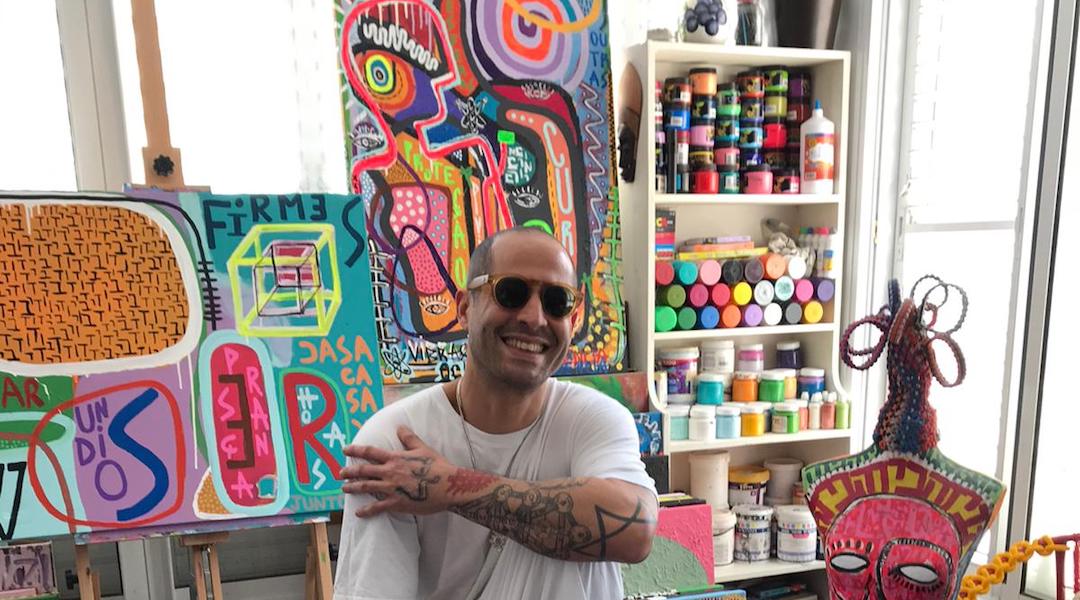 Especie in his home studio. (Courtesy of Especie)

When Especie was 5, his immediate family left the favela for a house next to Rio’s international airport, but they would regularly visit their loved ones left behind — including his mother’s 11 siblings and his grandfather.

Especie lived as a rebel teen involved with street graffiti, for which he was severely reprimanded by his conservative father. He had completed a fashion degree and was working in men’s boutiques and living in his parents’ home, sharing a small bedroom with his sister, when he met Frant, a graphic designer who lived a wealthy life in Rio’s upscale neighborhood of Lagoa with her Jewish family, the owners of a popular women’s clothing brand.

During that time, Especie also started making inroads as a multidisciplinary artist, working in sculpture, painting and textile arts. Colorful swings he made of macramé, a textile produced using knotting techniques, were exhibited in several places, including at the Xingu national park, an indigenous territory in the Amazon rainforest. (Two chairs he produced in 2014 sold at auction last year for thousands of dollars each.)

The couple moved in together not long after their encounter on the beach and soon married. Their first son, Zion, was born in 2010. Five years later came Noah. But by 2016, the couple had decided that their family’s future would not lie in Brazil. They were married by a judge and applied to make aliyah and move to Israel, with the goal of raising their children in a safer and more socially equal place. A downturn for Frant’s family business sales was the final boost they needed.

“My bond with Brazil is very strong and infinite, but the country is sunk in political, economic and social chaos,” Especie said, adding that he hates the corruption that characterizes much of Brazilian politics.

Israel has a robust system for absorbing new immigrants, which includes support with paperwork and months of intensive Hebrew language training. The family was welcomed at the absorption center in this city of 75,000, which today is home to the largest Brazilian community in Israel with nearly 300 families. 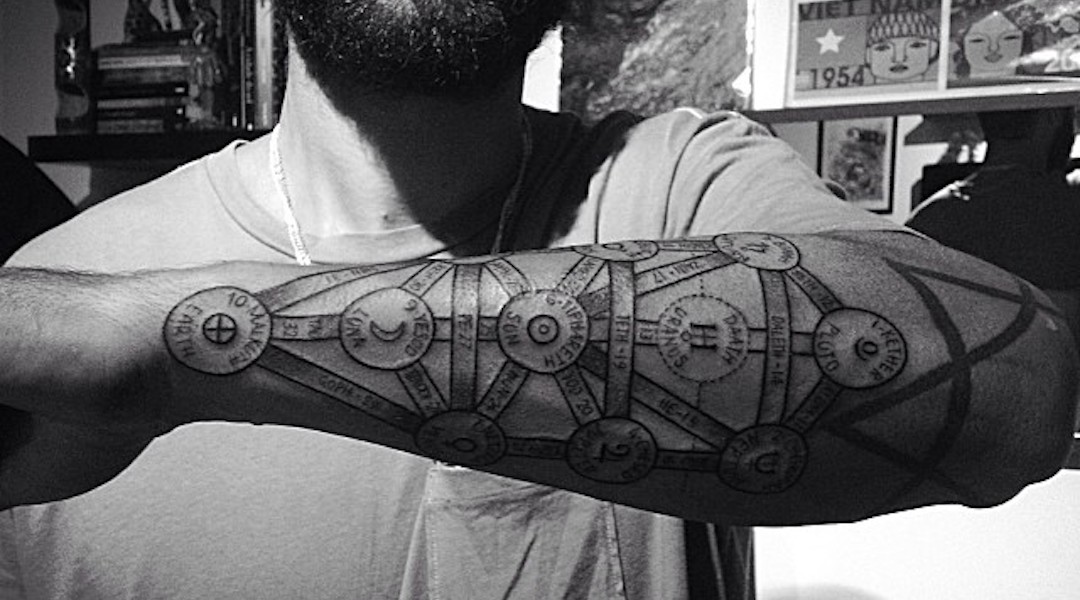 Especie has a tattoo of traditional Kabbalah sefirot. (Courtesy of Especie)

“Raanana has been blessed with immigrants with expertise in the fields of art, music, sports and more,” said Nehama Efrati, the French-born head of the municipal absorption department for 22 years. “They add much to the city’s human mosaic.”

Israeli law allows any Jew to claim citizenship, and it also grants citizenship to the non-Jewish spouses of Jewish immigrants (after one year of marriage). That means that Especie is part of the 2% of the Israeli population who are neither Jewish nor Arab.

He said he feels at home, in part because he suspects that he may have Jewish roots himself. Like many Brazilians, Especie is multiracial, with European, African and indigenous ancestors, and he grew up going to church every Sunday. But he notes that his mother’s maiden name is Braz — a relatively common Brazilian surname that he was told could also be an abbreviation for the followers of an 18th-century Lithuanian rabbi named Alexander Ziskind.

Especie first learned about Ziskind shortly after he met Frant, when they attended a basic Kabbalah course led by Shmuel Lemle, a Brazilian teacher at the Kabbalah Center in Rio.

“When I was introduced to Kabbalah, it changed the whole entire way I see the universe and myself,” Especie said. “I’m always searching for my origins.”

It was through that introduction that Especie ended up getting a tattoo reminiscent of the traditional chart of Kabbalah sefirot, or mystical attributes, which covers his whole left forearm. (He has since added the names of his wife and children in Hebrew.)

Like many Israelis today, the couple live a mostly secular life. But although he has never converted to Judaism and does not feel entirely comfortable going to synagogue, Especie finds strength in Jewish rituals. He began putting on tefillin, the phylacteries worn by observant adult Jews during weekday morning prayers, shortly before the birth of his second son after the father of a close Jewish friend gave him a set as a gift. Now he prays with tefillin daily.

“I teach my kids about the importance of putting on tefillin,” he said. (An Israeli-born daughter, Liz, joined older brothers in 2017.) “If every Jew put on tefillin, Israel would be surrounded by a shield of impenetrable energy.” 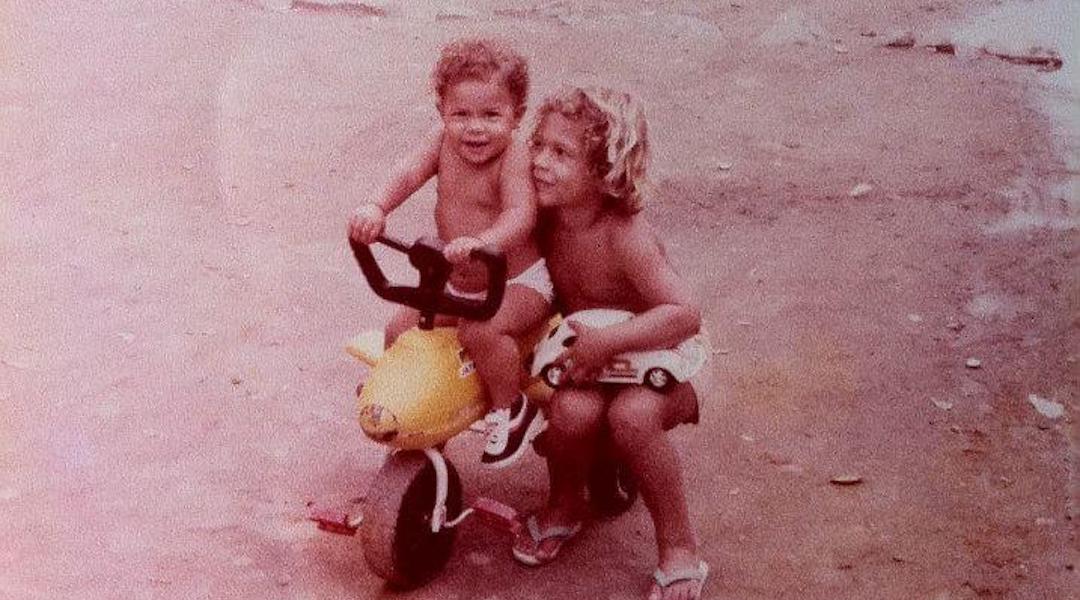 Especie, right, with his sister Rednala in the Vila Vintem favela in Rio de Janeiro. (Courtesy of Especie)

In Raanana, Especie works full time as a teacher’s aide at a municipal kindergarten, an occupation that pays about $10 an hour and is popular among new immigrants as a first occupation to help improve their basic Hebrew skills.

“I have always been respected. Last year, several parents signed a petition to the municipality requesting my continuation with their kids. It was really very emotional to me,” Especie said.

But in the evening and weekends, he works hard to boost the art career he started in his native country. He began by starting to paint over discarded canvases he found on his block, then joined a city-sponsored project to paint power boxes on the streets in 2017.

Especie’s formal Israeli debut came in 2018 with an exhibit at the Brazilian Cultural Center in Tel Aviv.

“It was an honor to welcome his first exhibit in Israel,” the center’s director, Raquel Yehezkel, told JTA. “He is building a new path with oil paintings and drawings that are really surprising by their maturity and the diversity of techniques and materials.”

In 2019, he was one of 10 international artists to exhibit in Tel Aviv to mark the 80th anniversary of the introduction of the fictional character Batman. And in 2020 he joined other immigrant artists at an exhibit at the Raanana Park gallery.

“With all due respect to the COVID-19 victims and their families, it was an amazing year for me,” said Especie, who was vaccinated in early January along with all of Israel’s education staff members.

At the end of the year, an Israeli gallery decided to post Especie’s portfolio online in Hebrew. In early 2021, he also committed to a new project to apply his drawings to rugs and wallpapers. Yet Especie says he still has a long way to go before he catches up to where he was professionally in Brazil.

“The art market in Israel is a niche of a niche when compared to Brazil, especially in Rio, where we breathe art 24 hours a day. I really miss the network I used to have,” he said. “Here I’m still crawling.” 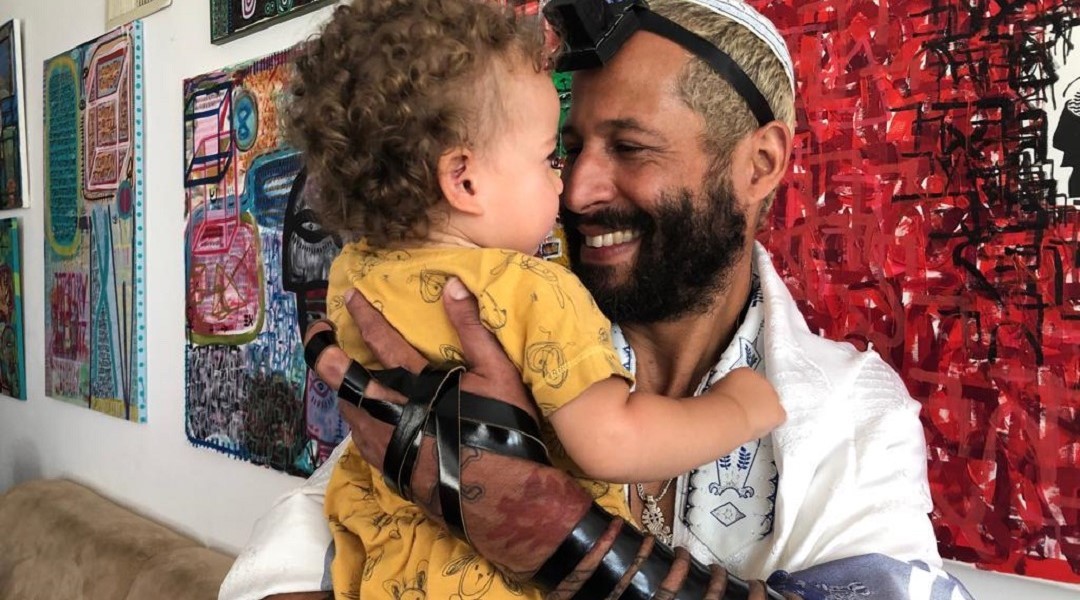 Especie, shown with his daughter Liz, puts on tefillin every day. (Courtesy of Especie)

“Israel,” he added, “is the biggest and most intensive learning of my life.”

Chaim Broide, the mayor of Raanana, says he supports Especie and all other artist immigrants to his city.

“My advice is to keep doing what they love, and to believe in their abilities. They bring a lot of honor to our city and enrich our culture, art and community,” he told JTA. “We will help them grow with their dreams.”