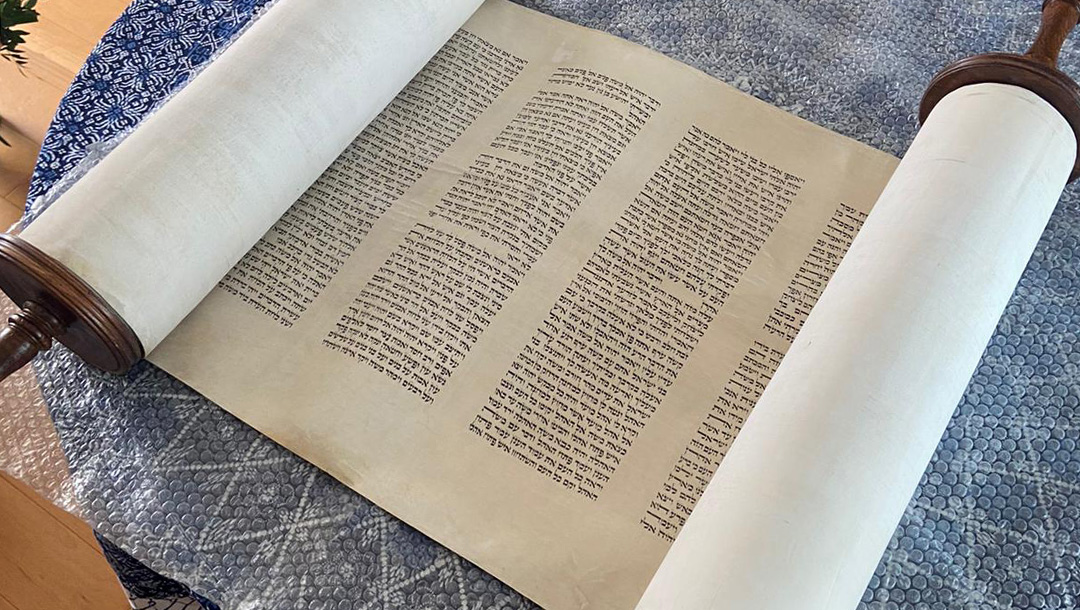 The lost Torah scroll of Dordrecht, the Netherlands, was kept in good condition by a family. (Courtesy of NIG)
Advertisement

AMSTERDAM (JTA) — A Torah scroll that disappeared from a Dutch synagogue following the Nazi invasion into the Netherlands has been rediscovered 80 years later and returned to the Jewish community.

The scroll, which appears to be intact and has been kept in excellent condition since World War II, belonged to a synagogue in the southern city of Dordrecht, according to Chris den Hoedt, chairman of the Jewish Community of Rotterdam, or NIG.

The Pennings family from Dordrecht kept it in storage for many years until one of the family members mentioned to a local historian, Kees Weltevrede, that she has a Torah scroll of unknown origins in her home. Weltevrede approached NIG, whose members were excited about this find.

“For decades no one knew what happened to the scroll in Dordrecht, it was simply presumed lost, like so many other religious artifacts lost in the Holocaust,” he said.

The Pennings said they’re don’t know how they came to possess the Torah scroll, which they gave to NIG this week, den Hoedt told the Jewish Telegraphic Agency. Rotterdam is fewer than 20 miles from Dordrecht.

After synagogues were shut down by the Nazi occupation of the Netherlands in 1940, the scroll, and several others, were kept by Meijer Michiel Cohen, a local Jew who owned a metal factory. He survived the Holocaust but was severely traumatized.

Another tradesman, Aart Bezemer, bought the factory from Cohen. He gave the scroll to Kees Pennings, a respected teacher from Dordrecht, who died in 2001. His widow, Tineke, told the historian about the scroll, leading to its return to Jewish hands.

Of the hundreds of Jews who lived in Dordrecht, only about 60 survived the Holocaust, according to an article published Thursday in the AD daily about the Torah scroll. The community ceased to exist as such in the 1980s.

The scroll, which rolled out measures about 45 yards, is being examined to determine whether it’s still usable for worship and whether it has any damage that would require restoration.