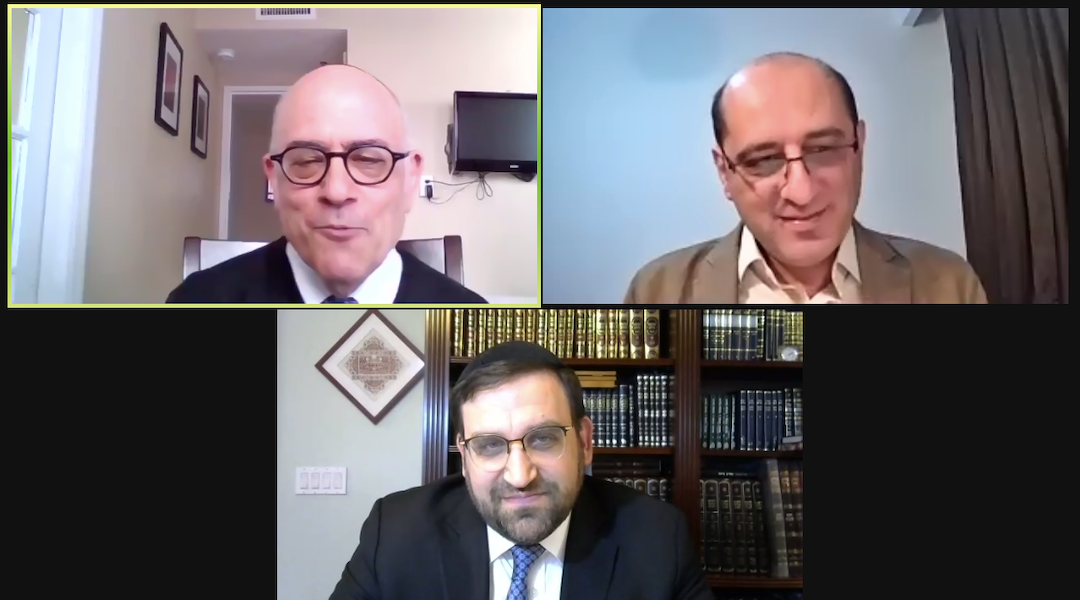 Arash Abaie, top right, a leader of the Tehran Jewish community, is interviewed via Zoom by Rabbi Jacob J. Schacter, a professor of Jewish history at Yeshiva University, top left, Feb. 28, 2021. Rabbi Yaakov Glasser, dean of the university's Center for the Jewish Future, which sponsored the program, is below. (Screenshot)
Advertisement

(New York Jewish Week via JTA) — Contrary to a commonly held belief, Jews living in Iran find it easier to practice their religion today than they did prior to the Islamic Revolution of 1979, according to a longtime leader of the Jewish community in Tehran.

Speaking live via Zoom on Sunday — Shushan Purim — from the land of Queen Esther and the Megillah, Arash Abaie, a civil engineer and prominent Jewish educator, cantor, Torah reader and scholar, explained why he believes Jews living in the country have intensified their religious observance over the past four decades.

Abaie said the Islamic Republic, with its deep commitment to religious law, interacts best with citizens, including Christians and Jews, who are themselves observant. He said Muslims respect Jews who pray regularly, fast, abstain from certain foods and believe in the Messiah.

“They look for commonalities” with Islam, he said, “and this leads to peaceful existence.”

The rare interview, conducted by Rabbi Jacob J. Schacter, was sponsored by Yeshiva University’s Center for the Jewish Future, where Schacter is senior scholar. He is also university professor of Jewish history and thought at Y.U.

The rabbi explained at the outset that he met Abaie at an international conference 18 years ago in Sweden sponsored by the U.S.-based Memorial Foundation for Jewish Culture. Schacter was impressed with Abaie’s deep knowledge of Jewish texts, saying that “in a class I was giving on Talmud, his knowledge of even the most obscure references I made was outstanding.”

This led to conversations between the two men during the conference and to their staying in touch over the years.

The 50-minute program on Sunday focused on what Jewish life is like today in the former Persia. The unspoken context for the discussion was that the largest Jewish community in the Muslim world is able to live in peace as long as its members steer clear of political involvement or showing support for Israel.

Shortly after the ’79 revolution, several Iranian Jews were accused of spying for Israel and executed. In an effort to stabilize relations with the Jewish community, the supreme leader of Iran, Ayatollah Khomeini, proclaimed: “We recognize our Jews as separate from those godless Zionists.” Nevertheless, 30,000 Jews left within months of the revolution.

Khomeini’s statement has not been forgotten, and Iran’s Jewish population has largely managed to navigate the complexities of a situation that allows them official minority status, a permanent seat in parliament and freedom to practice their religion in return for eschewing Zionism.

Abaie noted that historically, Jews were protected in Persia, though they were treated as inferior to the Muslim majority. He described a kind of uneasy peace, but acknowledged that over the centuries there were “periods of conflict.”

He did not elaborate on any current tensions, though Iran considers Israel its enemy.

Abaie explained that observant Jews are respected in the Muslim society as the People of the Book. (The Jewish and Christian Bibles are considered holy books and are part of Islam’s doctrine of progressive revelation; the narratives of Moses and Jesus lead to the story of Muhammad, the ultimate divine prophet, according to the Quran.)

Like nearly all the remaining Jews in the country, Abaie was born in Iran, as were his parents, grandparents and ancestors going back to “the time of Mordechai and Esther.”

Iranian Jews believe that the remains of the heroes of the Purim story rest side by side in a small, immaculately maintained prayer site in Hamadan, about a six-hour drive from Tehran. Declared a World Heritage Site by the Iranian government in 2008, the tombs are visited each year at Purim by many Jews.

Due to COVID, the site is closed temporarily.

According to Abaie, about 10,000 Jews live in Iran today, down from 100,000 before the revolution. It is believed that most are either too poor to consider leaving or believe they would be less financially secure if they left the country.

Abaie, who edited a Persian-Hebrew dictionary and puts out a weekly Torah portion flyer in the synagogue, spoke with pride of how the members of the Jewish community are permitted to maintain an active and robust religious life, with synagogues, youth organizations, kosher facilities and four Jewish schools.

In addition, Jewish students who attend public school are required by the government to spend two to four hours a week on religious studies administered by the Jewish community.

Following the interview, Schacter told The Jewish Week that he was grateful for “the extraordinary opportunity to hear Arash describe firsthand how, though the Jewish community is shrinking, its religious life seems quite robust.”

There were a few anxious moments during the live broadcast when, just after being introduced to the audience, Abaie disappeared from the screen. But he was soon back, indicating that the problem was only technical.