White supremacist propaganda nearly doubled in 2020 to most in a decade, ADL says 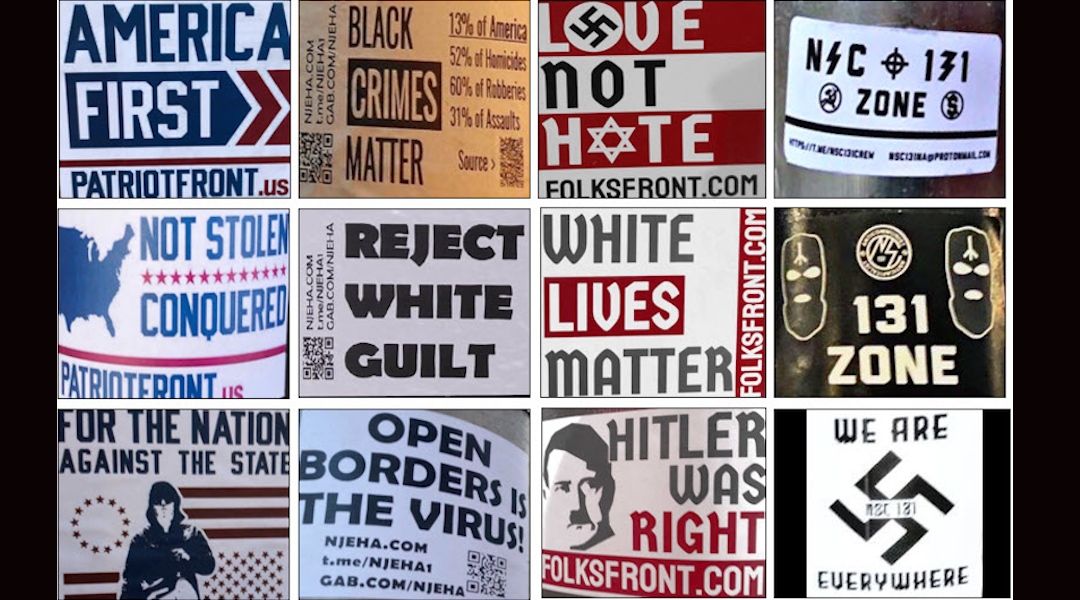 Examples of white supremacist propaganda recorded by the Anti-Defamation League in 2020. Many pieces reference American iconography or slogans. (Courtesy of the ADL)
Advertisement

(JTA) — Last year, the United States saw the most white supremacist propaganda in a decade, with thousands of flyers, bumper stickers, banners and other propaganda reported across the country, according to the Anti-Defamation League.

The vast majority of the propaganda the group tracked came from one Texas-based group that uses traditional American patriotic language and imagery in its materials — including the phrase “America First,” used by Donald Trump and his supporters.

The rise in propaganda may be attributable to the presidential campaign and election, according to the ADL, a leading anti-Semitism and extremism watchdog. In the months leading up to the vote, government officials and groups including the ADL warned repeatedly of extremist activity surrounding the vote.

Those warnings came to bear with the Jan. 6 insurrection at the U.S. Capitol, which led to five deaths. (That event, and the white supremacist groups and symbols present there, was not included in the 2020 tally as it took place in 2021.)

But while the “charged political climate” may have been conducive to propaganda, propaganda did not significantly increase as the election neared, and much of the content of the propaganda was unchanged from previous years and did not reference the vote or COVID-19, said Jessica Reaves, the editorial director of the ADL’s Center on Extremism.

“We can’t know for sure what moves the needle when it comes to propaganda numbers,” she said.

Reaves said the pandemic had a “mixed” effect on white supremacist propaganda efforts. COVID-19, she said, “may have slowed distribution on college campuses, while it’s possible lockdowns provided white supremacists with more cover and anonymity to post in cities and towns.”

Despite the overall increase in white supremacist propaganda, the ADL found that it dropped by more than half on campuses, to 303 last year from 630 incidents in 2019.

The ADL said the largest white supremacist event of 2020 was a flash demonstration in Washington, D.C., in February, before the pandemic became the dominant national issue and the election campaign heated up.

The vast majority of the propaganda in 2020 — 80% — came from a Texas-based white supremacist group called Patriot Front, which employs red, white and blue in its materials and plays on traditional American patriotic language.

One of the group’s stickers reads “Life, liberty and the pursuit of victory.” Another features a map of the continental U.S. and says “Not stolen, conquered.” A third says “America first,” the slogan with anti-Semitic roots that was adopted and popularized anew by former president Donald Trump.

In November, the group held a 100-person march down a main boulevard in Pittsburgh, a city that has become a pilgrimage spot for white supremacists two years after the deadly 2018 synagogue shooting there.

Just like in 2019, the only state without reports of white supremacist propaganda was Hawaii.