‘This has been exhausting’: Asian-American Jews on the Atlanta spa murders and rising anti-Asian hate crimes, in their own words 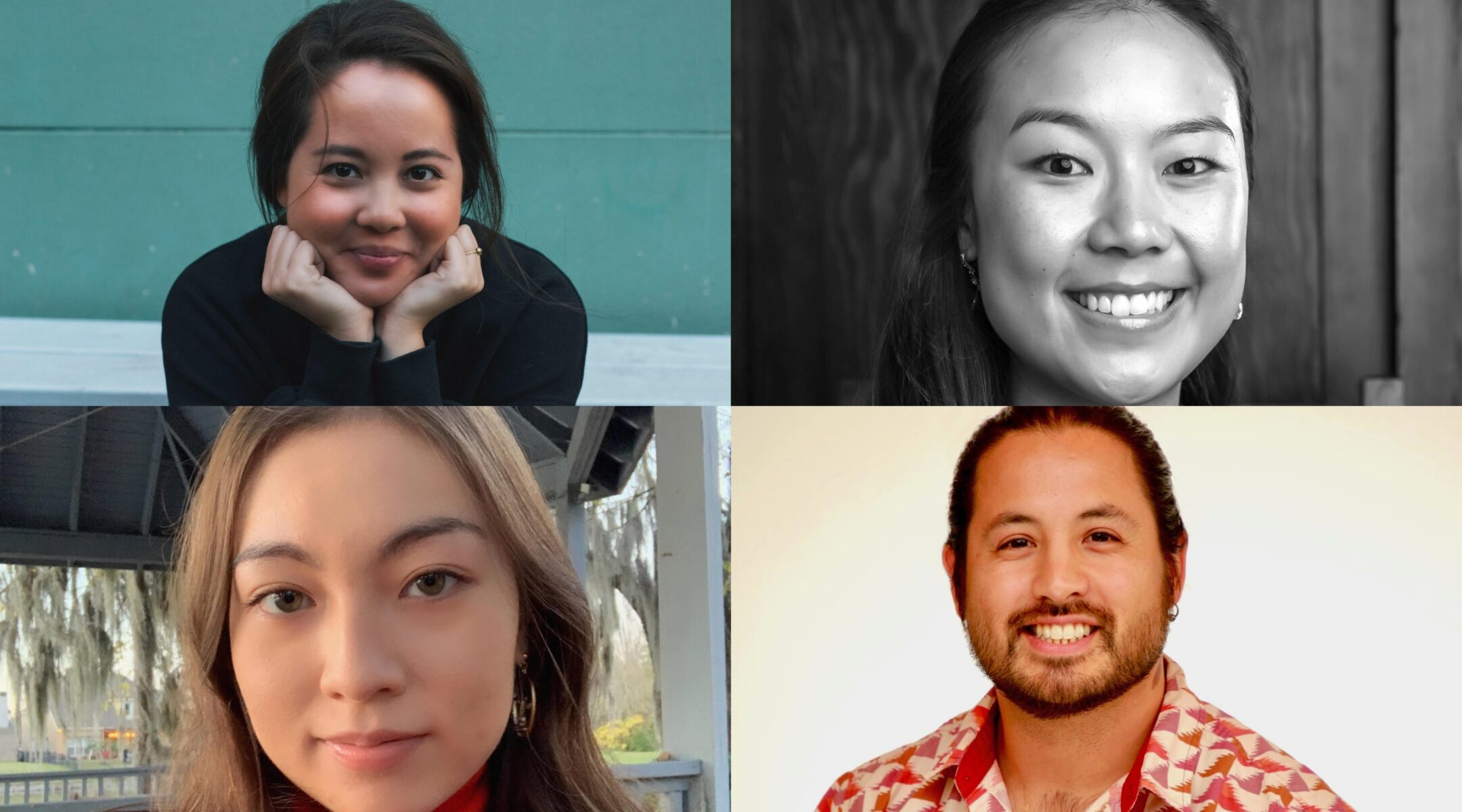 (JTA) — When Yoshi Silverstein learned on Tuesday night that eight people had been murdered at spas in Atlanta, and that many of the victims were Asian women, he felt deep hurt and pain as an Asian American.

It took until the following day for Silverstein to realize that the feelings were similar to those he felt after the Tree of Life synagogue shooting in 2018, in which a white supremacist murdered 11 Jews during Shabbat services in Pittsburgh.

“I’m Jewish on my dad’s side and Hakka Chinese and Cantonese on my mom’s side. In both cases, it felt deeply personal,” he told the Jewish Telegraphic Agency.

As the founder of the Mitsui Collective, a year-old community-building organization focused on Jewish diversity, Silverstein said he was embracing the opportunity to call attention to issues facing people of color in America, but that it felt like an intense responsibility.

“We had other stuff we were planning to do this week, but when something like this happens, sometimes when you’re a person of color and you’re in any sort of leadership, you get pulled into this,” he said. “You don’t want to just not respond because people are looking to you.”

We reached out to Asian-American Jews like Silverstein to understand what they are thinking and feeling at this difficult moment. We also collected some of the perspectives that appeared on Alma and Kveller, two of JTA’s partner websites at 70 Faces Media. Here’s what we heard.

Answers have been lightly edited for length and clarity. Do you have something to add? Let us know.

Hanah Bloom is a first-year student at Miami University of Ohio. This is an excerpt from her essay on Alma.

I woke up to a nightmare on Wednesday. Texts of “are you okay?,” tweets from fellow Asians, broken and terrified, and the carefully crafted words of support from prominent politicians flooded my feed. The mass murder in Atlanta, Georgia, that left eight dead, including six Asian women, was all I could think about, all I could see.

After getting through class, I called my mom in Alabama. With 600 miles between us, I FaceTimed with her to reevaluate the plan. For months, the rise in anti-Asian hate crimes in America hovered over us, forming a constant anxiety. As a family, we talked about staying hypervigilant. Now I advised her to stay away from certain areas of town.

I look to my Jewish community and I ask for deeper reflection and swift action. I wrote about the complexities of my identity last year. I wrote about the harm behind joking that Asians and Jews are somehow better suited for each other, per the model minority myth and fetishization. The media plays its role, making the coupling a joke and deeming a predatory relationship like Woody Allen and Soon-Yi Previn as admissible. I hope it’s apparent now that the consequences are violent. Infantilizing us and perpetuating Asian women as subservient under the white male gaze is killing us.

Rebecca Kuss is a Korean and Jewish children’s book editor living in New Jersey. This is an excerpt from her Alma essay “Asian Jews are suffering. We need you to listen.”

No matter how much I held up my Judaism for the world to see, it was not a shield against the overwhelming onslaught of white supremacy. It didn’t help when I was 8 and a white woman attacked me in a store for being a “f***ing chink.” I couldn’t use it the night a white man followed me home, begging me to “go North Korea on his dick.” It didn’t protect me in college when a Jewish guy I liked and who I thought liked me recorded us having sex and played it for his entire frat during their annual “Yellow Fever Week.”

After Tuesday night’s violent and devastating white supremacist attack in Atlanta, which resulted in the murder of six Asian women, I sat with my mom (like many good second-generation Asian daughters, she lives with me) and cried. I felt exhausted, hollow, angry. I felt like all I had ever known in this world was rejection, fear and death. The only question I could ask was “why?” and my mom — my beautiful, strong, stubborn, wise mom — said, “We’re Jews. We suffer.”

We are Jews. We suffer. Not we have suffered in the past (even though we have), or we know suffering (even though we do) — but we suffer in the present. And when one of us suffers, we all do.

Melody Muhlrad is a Taiwanese-American Jewish mother living in Los Angeles. This is an excerpt from her Kveller essay “Raising Asian Jewish Kids in the U.S. Has Never Been More Scary.”

I’m embarrassed to admit this, but my first reaction when thinking about how to best protect my children from the Asian and Jewish hate that they may experience was to flee. After my initial shock over the Atlanta shootings, I found myself dramatically proclaiming to my husband that I didn’t think that the United States was a safe place for our family anymore. Sure, it was an extreme reaction to what had happened, but perhaps it was the “fight or flight” reaction to fear that led me to choose “flight.”

In the past, my husband and I have talked about moving to a different country — particularly to China or Taiwan, given that I still have many extended family members there. It’s an idea we’ve addressed with more seriousness in the last year as COVID-19 has created more remote work environments. Now that anti-Semitism has hit an all-time high and Asian hate crimes are increasing in the United States, perhaps it is time to make this move?

And yet, upon further reflection, I recognized that fleeing the country is not the answer. In this dark time, I am reminded of the Jewish principle of tikkun olam, or repairing the world — the idea being that although the world is a good place, God left us room to make improvements. I realized that the way to keep my children safe is to do my best to make the world a safer place for them. I’m still figuring out what this means for me, and I know that this will be a lifelong process.

We cannot escape the fact that we in the United States live in a multicultural environment in the friendships that our children make, the people we hire to take care of our elders. Who we trust lives to are not necessarily white Ashkenazi Eastern European Jews. That is just the plain truth. We are dependent on the good graces of people that serve us so that we can live our lives Jewishly, and in a meaningful and holy way.

Yoshi Silverstein is a Chinese-American Ashkenazi Jew and the founder and executive director of the Mitsui Collective. He lives in Cleveland.

The very first folks that I started to hear from were people in my Jews of color community, particularly Black Jews. They knew exactly what we were all feeling, and knew exactly what was needed, in terms of making clear the support they’re offering, and that they had our backs. That was really powerful.

My response at Tree of Life was a feeling of we’ve been ringing the alarm bells for a long time, noticing the way that hateful rhetoric, in that case anti-Semitic and in this case anti-Asian, has been on the rise. In some cases, specific violence. And feeling like nobody was hearing us.

Anti-Asian rhetoric and violence has been on the rise in really marked ways since the beginning of the pandemic. There have been all of these violent attacks on Asian elders — in their 60s, 70s, 80s — on the streets in broad daylight. A couple weeks ago, some sporadic conversations were starting to sprout from various Jewish institutions — folks starting to pay attention and [saying], “Oh, should we do something?” It’s just painfully slow and felt like really not a high priority. We’ve been telling you that this violence has already been happening, and that something even worse was going to happen. And you weren’t listening.

It’s like the Black Lives Matter movement: It’s been growing for years, and it took the horrific, horrific nature of the murders of George Floyd and Breonna Taylor to really wake people up.

Responding to and talking about racism is hard. It’s not something that comes naturally. It’s something that you have to study and dedicate time and attention and energy toward. It’s like weightlifting. You don’t suddenly go deadlift 400 pounds when you’ve never done this before. You’re going to break your back. Last summer, we saw a lot of organizational leaders running around like chickens with their heads cut off. They knew it was important, but they had no idea how to respond.

I’ve spent a lot of my life subconsciously suppressing being Asian. And I’ve become really good at being “just” an Ashkenazi Jewish professional. And I think that’s one of the things that has really opened up as Jews of color have gotten more resources and attention: We’re able to more fully express all of who we are. And that’s becoming both allowed and championed. People are saying, “Oh, that’s actually really great. It’s expanding what Judaism means, and what it looks like and feels like to be Jewish.”

Gen Slosberg is a recent graduate of the University of California, Berkeley, and a founder of Lunar: The Asian-Jewish Film Project.

The pandemic aggravated mental health issues that I had been experiencing throughout college. With the surge in anti-Semitic attacks and anti-Asian violence, it feels like every other day one of my communities, or all of them, is being attacked. It’s like I never get to catch a break — today I explain anti-Semitism to my friends, tomorrow it’s anti-Asian racism. This has been exhausting.

Carmel Tanaka is a queer Jewpanese (Jewish and Japanese) woman of color and the community engagement director at Elimin8hate, an anti-racism campaign and reporting center launched by the Vancouver Asian Film Festival in partnership with project1907.

Anti-Asian racism predates the pandemic, and exists north of the border in Canada, too. And, unfortunately, because of the pandemic, the media’s fetishizing and hypersexualixing of Asian women, and the negative reinforcement in the media of attaching the virus to Chinese people and our Chinatowns, there’s been a rise. According to data collected by Elimin8hate, there have been more reported anti-Asian incidents in Canada than in the United States.

As a member of the Asian and Jewish and queer communities, I’m personally aware of the racism and hatred. It was Pittsburgh not too long ago and it was Orlando a few years prior. And now we have Atlanta. So I feel like all of my identities are being hit. At the same time, what has been truly incredible is to see all of my communities standing in solidarity and grieving together.

Since the pandemic, the silver lining is the ability to connect with other Asian Jews. So often we don’t get to connect because of the lack of inclusion, diversity and accessibility in the Jewish community. So it’s been really incredible to be able to meet people who look like me, who have similar experiences to me, but who also are different than me.