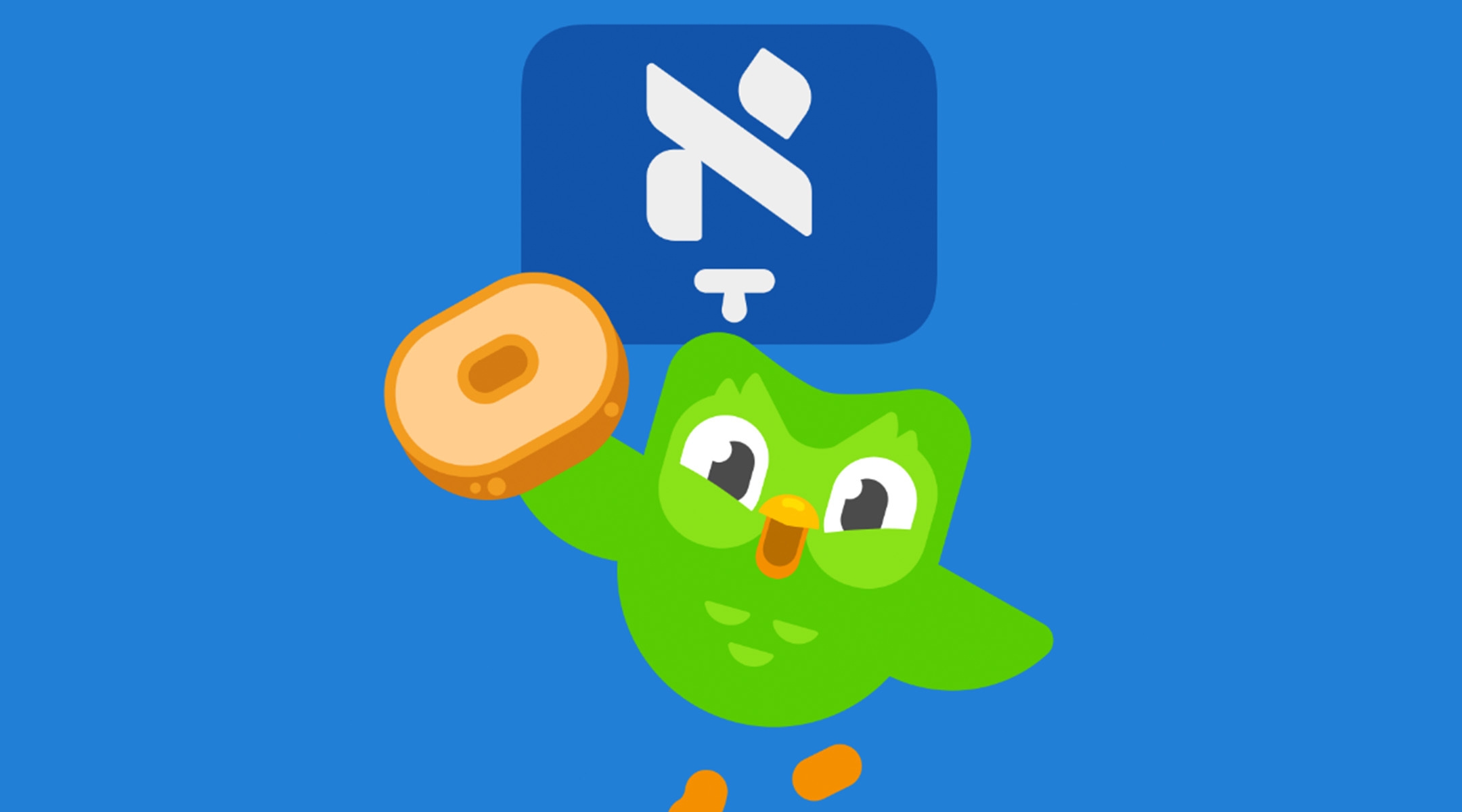 Duolingo's "flag" for the Yiddish course showcases an aleph with a "komets" diacritic, a foundational Yiddish letter. (Duolingo)
Advertisement

(JTA) — When Meena Viswanath signed on more than two years ago to help Duolingo, the world’s largest language learning app, create its first Yiddish course, she knew it wouldn’t be easy.

But Viswanath, the daughter and granddaughter of famed Yiddish scholars who speaks Yiddish at home with her children, assumed most of the difficulties would be technical. She wasn’t prepared for the challenge of blending the academic Yiddish she knows with the everyday dialect spoken by her Hasidic colleagues on the project.

The result of those negotiations will be visible when the course goes live on April 6, tapping into the groundswell of interest in the language spoken by at least 500,000 Jews around the world and studied by others.

“We used mostly the spelling and grammar that’s a little bit more formalized among the secular Yiddishists,” Viswanath said. “But then when we recorded the audio, we used the pronunciation that is used in the vernacular among students, specifically in Borough Park in Brooklyn and so forth.”

Launched in 2012 to help Spanish-speaking immigrants access English education, Duolingo now offers 40 languages on a free app that condenses language learning into what many, its founder included, have compared to a game. Users accumulate points and climb leaderboards of fellow “players” for finishing lessons and practicing every day. Its cast of cartoonish characters, including its mascot owl aptly named Duo, adds to the fun atmosphere.

The company is taking the dopamine boost to a new level for promoting the Yiddish course: Those who start on its launch date can get a free bagel courtesy of Duolingo at a few participating shops across the country, including Katz’s Deli in New York and Manny’s Cafeteria in Chicago — as long as the users place their orders in Yiddish.

The new course comes amid an explosion of interest in Yiddish instruction during the pandemic. The Workers Circle classes last summer had 305 students from 20 countries and 32 states, a 65% jump from the previous year. Meanwhile, YIVO’s Uriel Weinreich Summer Program saw attendance increase by 60% to 120 people — and then five times as many students enrolled for the winter program compared to the previous year.

“It was a chance of a lifetime for people who didn’t have to come to New York and spend money on renting a place, which can cost more than the registration for the program, or who couldn’t come for the whole summer,” Dovid Braun, the YIVO program’s academic director, told The New York Jewish Week in August.

The Duolingo program is different from those classes in ways that go beyond gamification. First, it’s geared toward introducing users to contemporary spoken Yiddish rather than the historical form taught at YIVO or The Workers Circle classes. Second, it’s probably less likely to result in anything approaching fluency: Duolingo has been criticized for being fun but not offering functional language instruction. 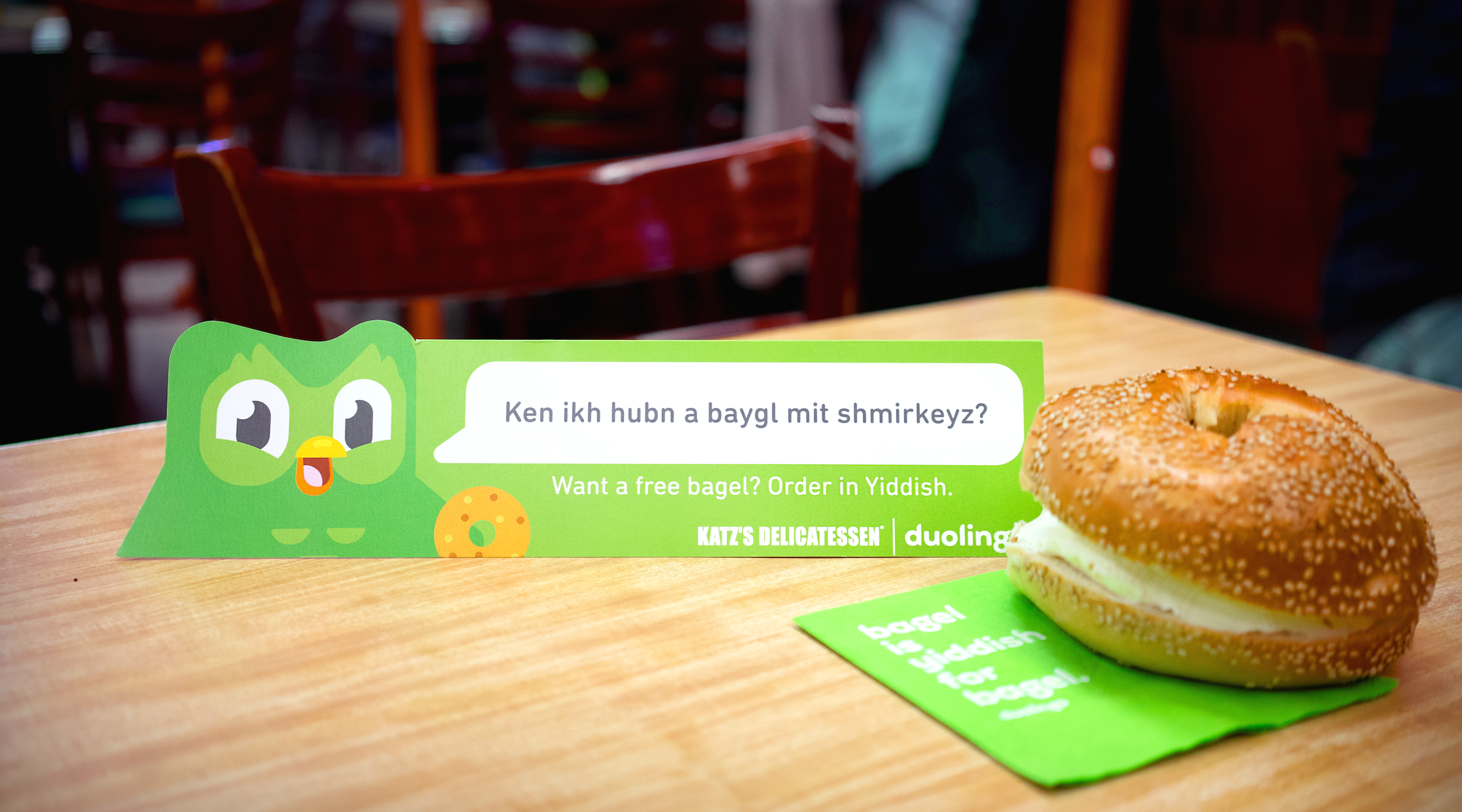 Duolingo is giving users who order in Yiddish a free bagel on the course launch date. (Duolingo)

Viswanath was the only representative on the Duolingo creator team of the more secular, academic realm of Yiddish learning. While she admits that using a Duolingo course is not equivalent to taking a college-level or immersive summer language class — and the first version of the course will take users only to an approximate “intermediate” level (Duolingo often adds content to its courses over time with the help of user feedback) — she does think it will have a big impact on the general public’s interest in and recognition of the language.

“Just the amount of exposure that it is going to bring for the Yiddish language, and increase that pipeline of people who then might do the course and then say, ‘Hey, this is interesting. Let me look up further opportunities.’ And then could take them further,” she said. “You could be from anywhere and Duolingo could lead you to this Yiddish world where you could become fluent in it.”

As an example of someone who took on Yiddish later in life, Viswanath cited her father, a native of India who learned the language and married Gitl Schaechter-Viswanath, editor of the “Comprehensive English-Yiddish Dictionary” and a daughter of Mordkhe Schaecter, the progenitor of a dynasty of Yiddishists. Meena Viswanath, who is involved in other Yiddish education programming but is a civil engineer by day, grew up speaking Yiddish and Tamil, and is now raising her children with Yiddish in her home. (Her brother Arun is also noted in the Yiddish world — he published the first translation into Yiddish of a Harry Potter book last year.)

“So many people, especially Americans, are aware of Yiddish. But their awareness is often limited to stereotypes, or a few phrases here and there that they heard their grandparents or neighbors say,” Viswanath said. “And I really hope that those people will open the course and start doing it and realize, ‘Hey, Yiddish is a real language, it’s got grammar, it has a vocabulary.’ You can’t just say anything in a funny way, in a funny accent, and say it’s Yiddish. You can talk about day-to-day things and Yiddish is not just for the punchline.”

Among the tricky decisions Viswanath and her collaborators faced was how to balance various dialects. In one small example, “The word that the secular Yiddish world uses for cup, like a drinking cup, is what Hasidim use as a cup to wash your hands, to pour water on your hands,” Viswanath said, referring to the Orthodox custom of netilat yadayim, a ritual hand washing performed every morning and before meals with bread. “And the word they use for cup is the word we use for glass.”

Among dilemma for the Duolingo team: how to design a flag for the course. Most of the app’s other offered languages simply use the flag of the country where each language originated — the French flag for the French course, for instance. Yiddish, a combination of German, Hebrew, Aramaic and even bits of other Slavic and Romance languages, presented a more complicated situation.

After much deliberation, the team agreed on a white aleph with a “komets” diacritic underneath — that gives the Hebrew letter pronunciation roughly an “ooh” or other sound, depending on the dialect — on a dark blue background. Viswanath said the symbol represents the foundation of the Yiddish alphabet, and also brings to mind the classic Yiddish song “Oyfn Pripetshik,” about a rabbi teaching students the aleph-bet, which has featured in “Schindler’s List” and other soundtracks. Part of its chorus goes: “Repeat and repeat yet again/‘Komets-alef: o!’”

The white-and-blue color scheme was coincidental, Viswanath said, and not meant to evoke the Israeli flag’s colors. Yiddish is not spoken or as much of a subject of fascination in Israel as it is in the United States, mostly because many of the state’s founders and other early Zionists — David Ben-Gurion included — pushed to make Hebrew the country’s language. They saw Yiddish as “old-fashioned” and a symbol of the scattered Diaspora — in opposition to their vision of a unified nation of Jews, many of whom spoke other languages in their native lands.

Viswanath said the team also was keenly aware of not aiming to position Yiddish as the universal language of the Jewish people (Duolingo has a Hebrew course). Instead, she hopes the broadly shared language course can help bridge the divide between secular society and the haredi Orthodox world.

“I hope there’s going to be some increased understanding between the two,” she said.