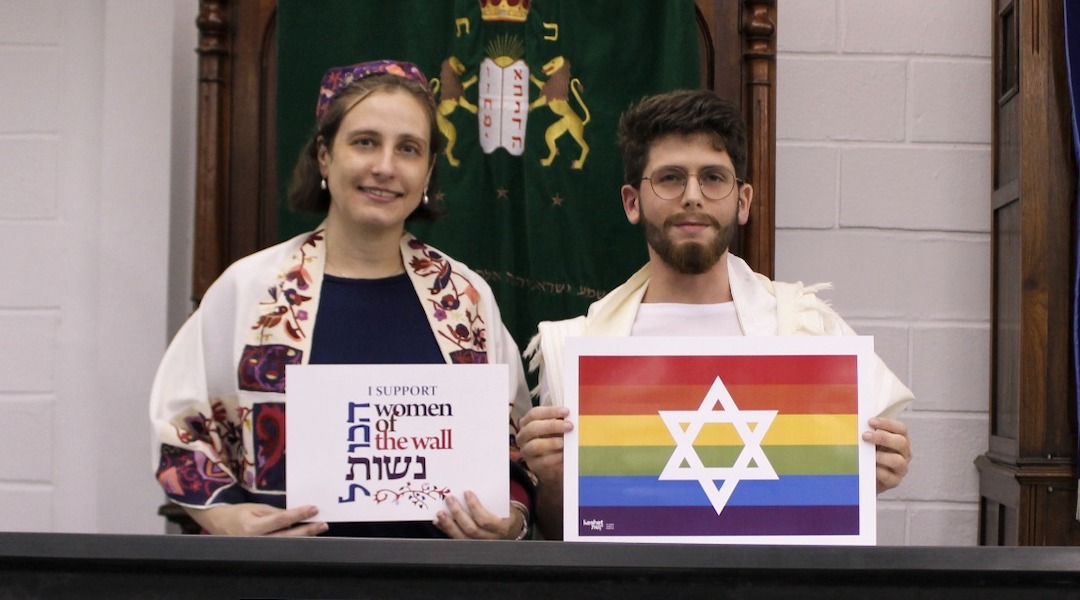 (JTA) — As the sun began to set on one Friday in Recife, Brazil, Andre Liberman moved quickly to prepare for the evening Shabbat service. Tall, white candles were placed in gold stands, a glass pitcher and silver bowl for handwashing were set up on the back table, and 35 attendees made their way to black, wooden seats in the white-walled, cinderblock sanctuary. Liberman, 21, wore a rainbow kippah and a white T-shirt that read “Proud to be Queer and Jewish” in English.

That service on June 21, 2019 at the Centro Israelita de Pernambuco made history: It was likely the first time a Brazilian synagogue had hosted a diversity-themed Shabbat service. Participants spoke about their experiences of being Jewish and LGBTQ, Jewish and a woman, Jewish and Black.

“Our Shabbat was meant to celebrate diversity and inclusion within the Jewish community,” Liberman said.

Brazil’s socially conservative Jewish community is often described as closed off and concerned with maintaining traditional family structures. For the past five years, Liberman has been organizing and advocating for the inclusion of LGBTQ Jews in that world.

The unique service could not have happened without the law student and activist.

“Andre organizing the first diversity Shabbat in a synagogue was something we never even thought possible,” said Lilyth Ester Grove, an American expat who is active in LGBTQ rights issues in Brazil. “What’s important is that we are showing that we exist.”

As a Jewish trans woman Grove, 29, experienced firsthand both the conservative nature and complexity of intersectional identities in Brazilian Jewish spaces.

“I don’t like to say that Brazil is behind the U.S.,” Grove, who came to Brazil in 2016 to complete her master’s degree, said of the 120,000-member Jewish community. “Because our countries have very different histories.”

These differences between how Jewish communities in America and Brazil view their LGBTQ members became painfully present to Liberman as he embarked on his personal journey. He came out to his friends and family in 2015.

“It was a time when some of my relationships ended,” he said. “My relationship with Judaism was one of them.”

This was partly due to being present for a homophobic speech at his synagogue during the morning prayers shortly after coming out. The Torah portion of the week was Parashat Ki Tetze, a reading full of commandments regarding war, marriage, divorce and prohibitions relating to proper family life, such as the prohibition of cross-dressing. The men around him quickly expressed their distaste for both cross-dressing and “people like that.” Liberman said he felt as though the entire room looked his way as they described the “people like that” as an “absurdity that never existed before.”

“I realized then that I couldn’t be there,” he said, “and that Judaism wasn’t for me.”

During the following year, Liberman visited Buddhist temples, Brazilian spirituality centers and a few churches. He didn’t connect with any of them as he did in synagogue.

In February 2016, he and his father traveled to New York City, and their first night fell on Shabbat. His father suggested they visit a synagogue and, though he was hesitant, Liberman agreed. They went to Temple Emanu-El, a large Reform community on Fifth Avenue in Manhattan, and upon entering Liberman noticed a girl wearing a shirt bearing both the LGBTQ flag and the Star of David. He was shocked.

“I had never seen those two symbols together before,” he said.

Liberman spoke with the girl and she explained that she worked with Keshet, a grassroots organization that aims to support and empower LGBTQ Jews and their families. Realizing that people and organizations are working to advance the rights and inclusivity of LGBTQ Jews, Liberman was emboldened to reengage with his Jewish life. Now he is an energetic and passionate advocate.

Ariel Lebl, 31, who lives in Sao Paulo and grew up in a Masorti community, had an easier experience coming out in his Jewish community. Lebl described the process as uncomplicated, but said he had felt the need to prove himself to be an asset in his community beforehand. Before assuming his current position as a senior associate at the United Nations Refugee Agency, Lebl worked for nearly a decade as Brazil’s development director for Birthright Israel. He’s also affiliated with a synagogue and works as a volunteer for the Jewish Federation of Sao Paulo.

Despite his seamless coming-out, Lebl also believes that equality and representation problems remain even in more progressive circles.

“Eventually I’d like to get married,” he said. “As far as I know, there’s only one synagogue that officiated an LGBTQ wedding five years ago.”

Lebl also wonders if he will be able to raise his kids as Jewish.

All challenges considered, he feels that much progress has been made over the past 25 years to pave the way for the younger generation.

“Right now, a lot of rabbis and other Jewish leaders are willing to at least talk about it,” he said. “This is really good and I’m thankful.”

Lebl now volunteers with Grove, Liberman and other activists to create an LGBTQ inclusion group for Brazilian Jews.

“We are thinking of ways and strategies to connect LGBTQ Jews back to the community,” he said. “There aren’t enough opportunities or programs today for LGBTQ Jews to engage.”

Lebl says that part of the solution is lifting LGBTQ voices in the community.

“I want people to tell their stories,” he said. “I want to make people feel seen, heard and valued.”

That’s exactly what Liberman, Grove and other LGBTQ Jews and their allies in Brazil are trying to do by organizing events, researching, advocating and talking with rabbis about diversity.

“A lot of key people are coming together and organizing and being like, ‘yeah, we’re here and we’re queer. Shabbat shalom,’” Grove said.

In the five years since his trip to New York City, Liberman, who now dreams of being a rabbi, has become a well-known activist for LGBTQ Jewish life in Brazil. The Diversity Shabbat aside, he appears regularly on panels and has been invited to speak to multiple organizations about how to make their institutions more inclusive. He’s even written a how-to guide for conducting inclusive Shabbat services.

In 2020, he became a member of the Jewish Federation of Sao Paulo as it worked to establish its first department dedicated to LGBTQ affairs. Also last year, Liberman was the only representative from South America to speak at Pride in the Living Room, an event organized by the Israeli National LGBTQ Task Force. This year he became one of their LGBTQ ambassadors.

“I want spaces supporting intersectional identities to be something people can access here in Brazil without having to go to the United States or elsewhere,” he said.

For now, during a time that he describes as “Brazil’s LGBTQ Jewish Spring,” Liberman studies Judaism with 16 other young LGBTQ Jews. They recently returned to Parashat Ki Tetze, the Torah portion that was discussed in 2015 when he thought he would leave Judaism forever.

This time he was surrounded by a different community.