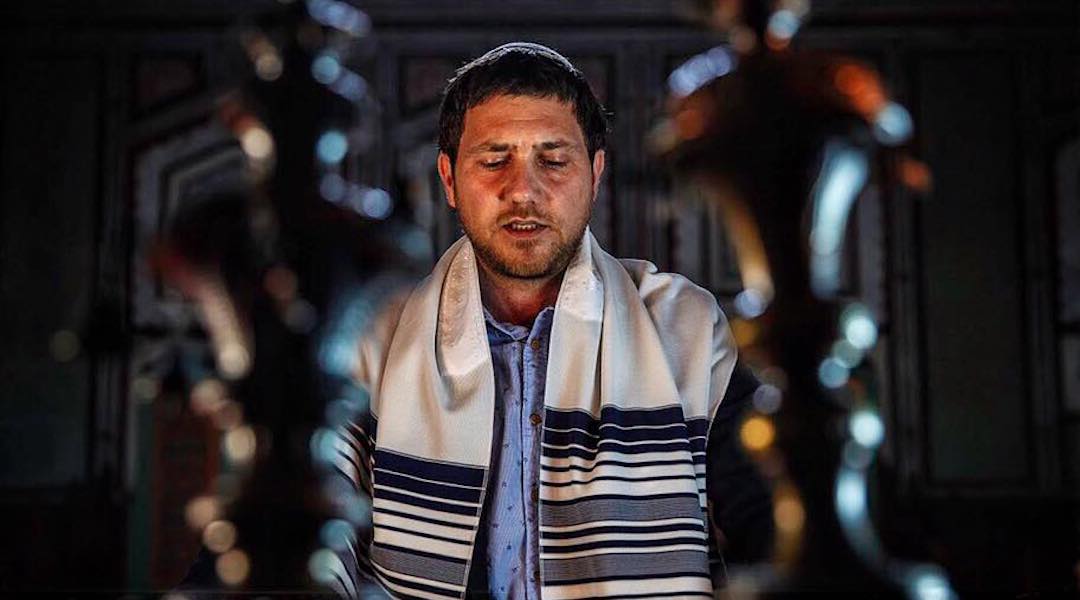 Phillip Weiner on the toll COVID has taken on Bosnia's Jewish community: "It's a horror show." (Courtesy of Weiner)
Advertisement

(Jewish Journal-Massachusetts via JTA) — It’s been nearly a decade since Phillip Weiner last lived in Sarajevo, where he served as an international war crimes judge.

But Weiner has remained in touch with the Bosnian Jews he met there, and when he heard about their plight during the COVID-19 pandemic, he knew he had to do something.

Serving in the Hague court at the Yugoslavia war crimes tribunal, Weiner prosecuted those responsible for the atrocities committed during the Bosnian War from 1992 through 1995. He lived off and on in Sarajevo, now the capital of Bosnia-Herzegovina, for more than four years from 2006 to 2012, and attended Shabbat services at the Jewish Community Synagogue.

Weiner became acquainted with many prominent members of the city’s Jewish community, some of whom are now falling victim to COVID-19 amid a surge in cases there. His contacts say the pandemic has claimed the lives of as much as 5% of Bosnia’s tiny Jewish community.

“Many Jews are dying. It’s a horror show,” Weiner said. “David Kamhi, a prominent concert violinist and diplomat, died. Jakob Finci, the president of the Jewish Community of Bosnia-Herzegovina, is in serious condition.”

More than 1,000 Bosnians marched through Sarajevo earlier this month to demand the resignation of the government over what they say is the country’s poor handling of the coronavirus pandemic. Bosnia has reported 7,000 deaths from the disease and has among the highest fatality rates in Europe.

What’s more, the country has not embarked on a vaccination program of any significance. So from his home in the Boston area, Weiner is working backchannels to get doses of a vaccine to the Jewish community in Bosnia. 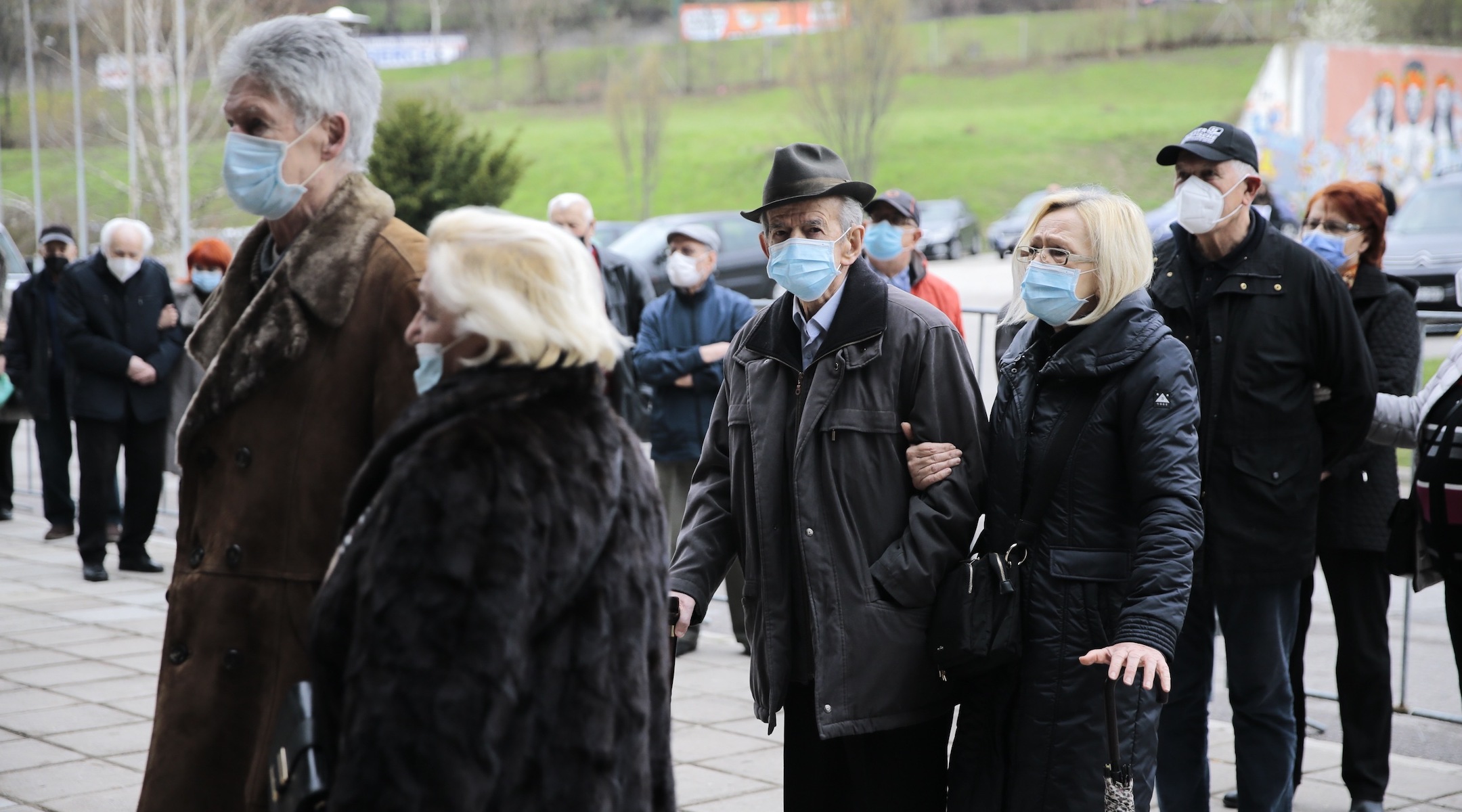 People over 75 years old line up to receive a dose of a COVID-19 vaccine at a sports hall in Sarajevo, Bosnia-Herzegovina, April 21, 2021. (Samir Jordamovic/Anadolu Agency via Getty Images)

He has contacted the Israeli Ministry of Foreign Affairs, the consul general of Israel to New England in Boston and the American Jewish Committee in Los Angeles. So far, he said, there has been no response.

Those who are able to travel have taken the six-hour trek to Belgrade, Serbia, for vaccinations, according to Igor Kozemjakin, the 41-year-old cantor and acting rabbi of Sarajevo’s Jewish Community Synagogue.

But traveling to a neighboring country is not possible for many elderly, including Bosnia’s 90 Holocaust survivors, said Kozemjakin, whose own mother died of COVID-19 in late March. His father, Boris, age 73, had a mild case and is not yet vaccinated.

The European Jewish Congress estimates there are about 500 Jews living in the country. Kozemjakin said he learned from Elma Softic-Kaunitz, secretary general of the Jewish Community of Bosnia-Herzegovina, that 5% of community members have died of COVID.

Kamhi, a community leader, was among the Holocaust survivors to succumb. He was 5 years old when a Muslim family helped his family flee Sarajevo in 1941.

“David Kamhi was a very important member of our community and in general society,” Kozemjakin said. “I succeeded him as cantor. The Jewish community is 85% Sephardic and Kamhi kept the traditions. He was the last living speaker of Judaic Español – Ladino – the language of Sephardic Jews. It was his mother tongue.”

Kamhi was active during and after the 1992-95 war, was president of the Commission for Culture for the Jewish community in Sarajevo, and researched the culture and traditions of Bosnian Jews. His brother-in-law also died of the virus, and Kamhi’s widow, Blanka, recovered after falling very ill, according to Kozemjakin.

Another survivor who remains gravely ill is Finci, who was born in 1943 in an Italian concentration camp on the island of Rab (now in Croatia) and has long been an advocate for Bosnian Jews.

Finci, a former ambassador, once was the president of the Jewish Community of Bosnia-Herzegovina. In 2009, he and Dervo Sejdic contested a law that excluded Jews and other minorities from running for elected office. They won at the European Court of Human Rights in Strasbourg — the Supreme Court of Europe — but Bosnia has still not implemented the judgment.

Finci was treated for COVID-19 in the military hospital in Sarajevo. In a phone interview with the Jewish Journal, the hospital’s director, Dr. Ismet Gavrankapetanovic, decried the country’s lack of vaccines to inoculate the population. Asked if he could expect the vaccine anytime soon, Gavrankapetanovic answered with exasperation. 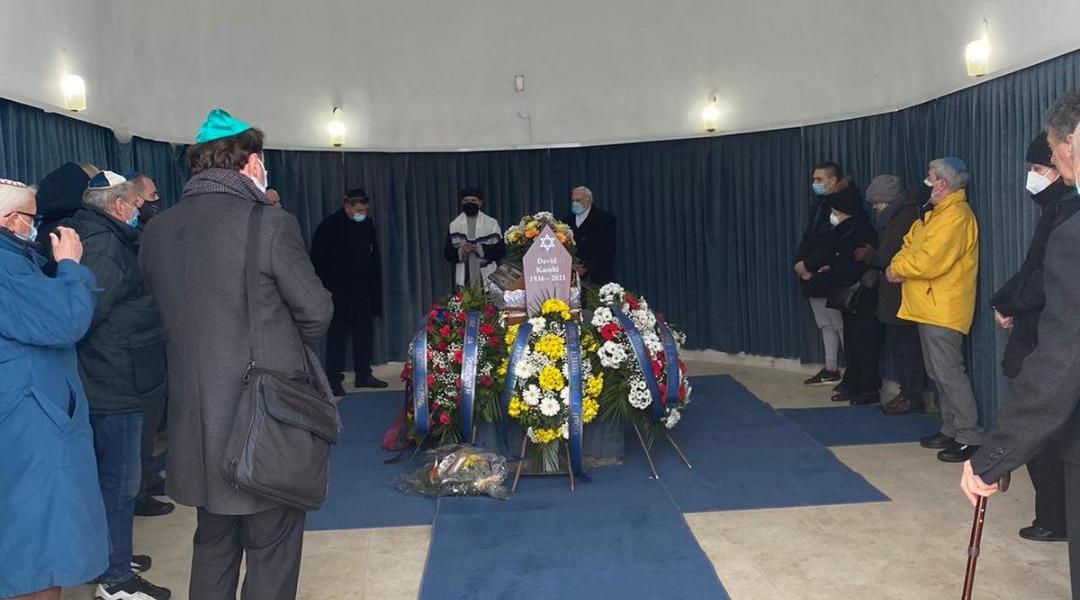 Bosnia’s government is uniquely ill-prepared to handle a crisis calling for immediate decision-making, according to a recent Politico Europe analysis. A multitiered administration created at the end of the war in 1995 guarantees representation for the Bosniak, Croat and Serb ethnic groups whose political leaders are locked in a perpetual fight — but also fuels deadlock at a time of crisis, when quick decisions are vital. COVID-19 is now killing more civilians every day in Sarajevo than died during the Bosnian War in the 1990s, Politico concluded.

“It feels like we’re back during the Bosnia War,” she told him, according to Weiner. “The only difference is that bombs are not falling from the sky. Instead, people are sick and dying.”

This leaves Weiner and others who care deeply about the country and its fragile Jewish community wondering who will help Bosnia. He said he would continue seeking vaccines for the community.

“The prime minister of Israel has indicated he would make sure that all Holocaust survivors throughout the world are vaccinated, and I would hope that Israel will now take action in Bosnia,” Weiner said. “Germany has announced the donation of $13.5 million to vaccinate Holocaust survivors worldwide. I hope they can implement that program very quickly.”