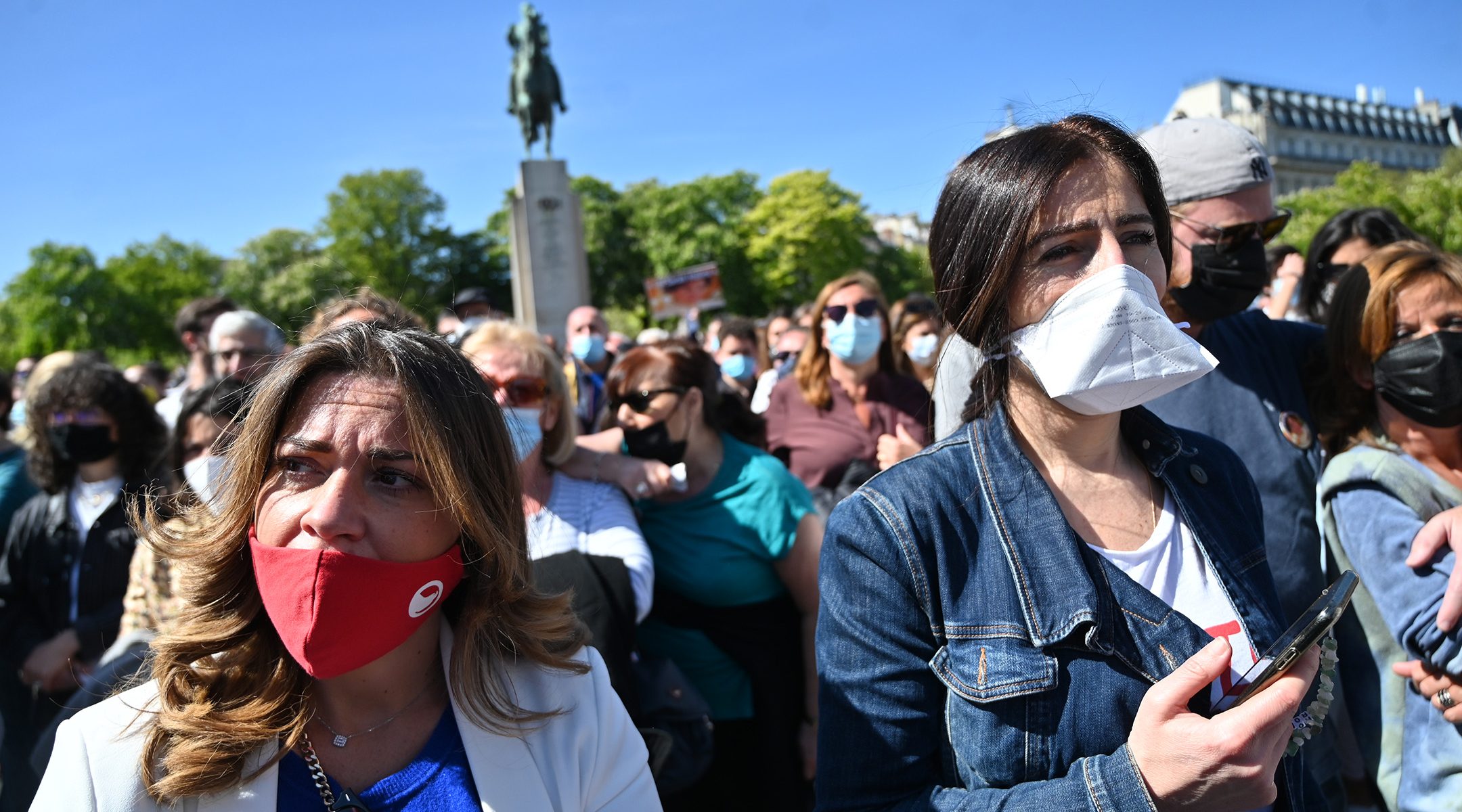 PARIS (JTA) — A rumble rose from the 20,000 Jewish protesters at Trocadero Square, then exploded into shrill screams.

“I don’t even know whether to reassure you or cry out my fury,” boomed Joel Mergui, president of the Consistoire, the organ of French Jewry responsible for providing Orthodox religious services. “Yes, cry out your fury!”

French Jewish events are usually dignified affairs that often end with the singing of the Marseillaise, the French national anthem. But the rally on Sunday protesting the fate of the man who murdered his Jewish neighbor Sarah Halimi in 2017 — the largest Jewish gathering in France in at least a decade — was a rare show of raw emotion from a community that has questioned its future in France in recent years.

The protest, which had smaller offshoots in other cities such as Tel Aviv, Miami, London and the Hague, was triggered by the April 14 ruling by a high French court in the Halimi case. A man named Kobili Traore, who was 27 at the time and a devout Muslim who would spend entire days at a nearby mosque, entered Halimi’s apartment and beat her to death while shouting about Allah. Traore then threw Halimi out the window.

Traore had targeted Halimi, a physician in her 60s, because she was Jewish, a lower court established. But federal judges determined that marijuana that Traore had smoked before the killing had made him psychotic and unfit for a trial.

Many at the rally and beyond found the moment to be a final straw in the strained relationship between France’s Jews and its justice system, and in their tenuous position in a country known for its high rates of antisemitic incidents. 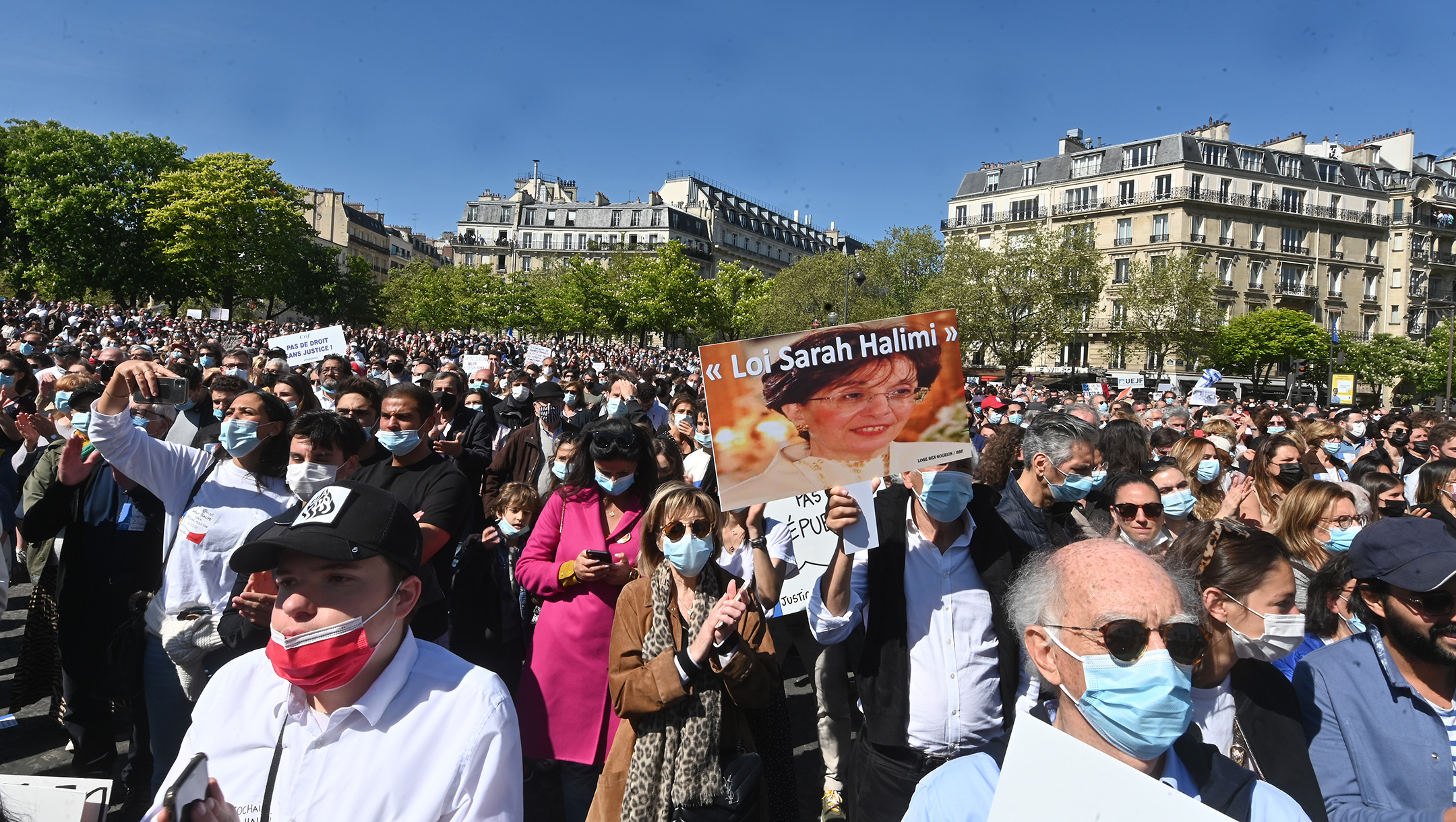 About 20,000 people showed up for the rally in the French capital. (Cnaan Liphshiz)

Signs reading “In France, the life of a Jewish woman is worth less than a dog’s” referenced another 2017 case involving a man who threw a dog out a window and failed to convince judges that he was completely under the influence of drugs.

“I say this sadly: We’re reaching a grave point,” Mergui said, speaking into a podium-mounted microphone. “A ruling that’s a watershed moment. A black stain on the confidence of French Jews in their country.”

Allyana Levy, 20, a student from Paris in the crowd and a leader of a Jewish group in the Scouts movement, admitted she was unsure about her future in France.

“Sometimes I think I’ll stay here, other times, like after the Sarah Halimi affair, I’m not so sure,” she said. “When I’m afraid to walk in the street because I’m a woman, because I’m Jewish, it’s difficult. My nieces in Israel feel safe at all hours of the night. So you start thinking what’s better.”

Levy lives in Paris’ 11th District, which hosts the quiet street where Halimi lived. Once a poor immigrants’ neighborhood, its halal butcher shops and mosques now operate next to snazzy bars and organic shops — testaments to the recent gentrification that has made the district a preferred spot for students and young families.

Another protester, 18-year-old Alice Levy — not related to Allyana — said Halimi’s case is “frightening for me as a Jewish woman.”

“But it opens the door to wider fears about life in France in general when there’s obviously problems with the police, justice system, media, political establishments and religious frameworks,” she said.

About 50,000 Jews have immigrated to Israel in the past decade, a massive and unprecedented departure from a community of about 449,000, according to a 2020 demographic survey. The exodus coincided with a wave of terror attacks on Jewish institutions carried out by radicalized Islamists, beginning with the 2012 murder of four Jews at a Jewish school in Toulouse.

The Halimi case eroded confidence in France’s police after it emerged that nine officers were present outside Halimi’s apartment at the time of her slaying. According to some accounts, they were scrambling for 20 minutes to find her apartment. Other accounts speak of an intentional delay outside her door.

The National Bureau for Vigilance Against Anti-Semitism watchdog group has called for an internal inquiry into the policing situation but has been ignored. Immediately after the high court’s ruling, French President Emmanuel Macron said he would advance a law to prevent the recurrence of assailants avoiding trial due to drug use.

That pledge seemed to do little to assuage the concerns of the rally participants. Many French Jews believe the Halimi case was intentionally treated in the French media for weeks as a neighborly dispute that took a tragic turn in order not to rock the boat for Macron, who at the time was at the tail end of a presidential election campaign against Marine Le Pen — a far-right populist known for her staunch anti-immigrant and anti-Muslim rhetoric.

Sunday’s rally brought out some of French Jewry’s best-known figures, ranging from Chief Rabbi Haim Korsia, who said a mourner’s prayer for Halimi; to the popular comedian Gad Elamaleh, who warned that “the next Sarah Halimi may be Black, Christian, Muslim”; and the philosopher Bernard Henri-Levy, who called for the law being drafted in the affair’s wake be named for Halimi. 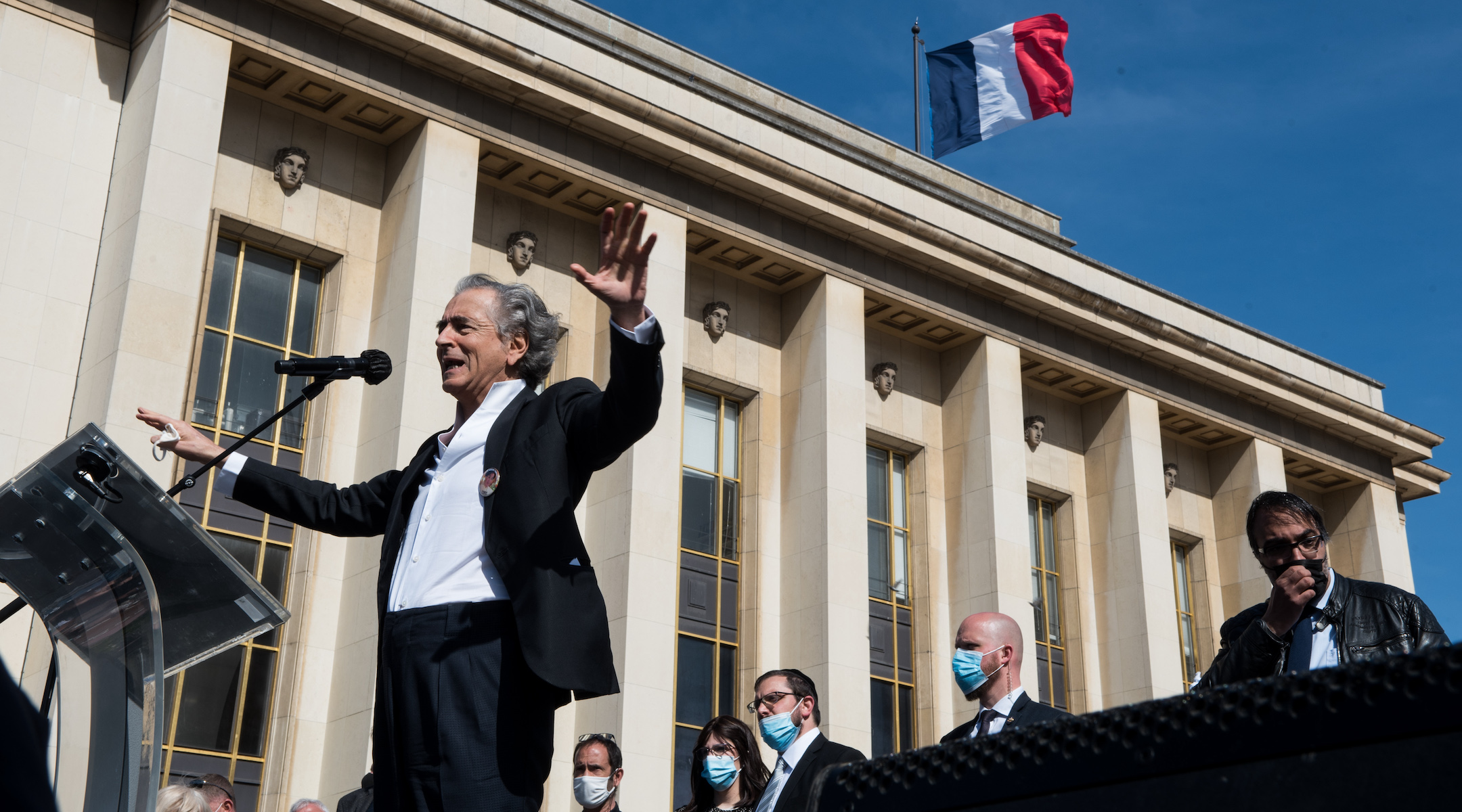 Priests and imams also came, as did Paris Mayor Anne Hidalgo, who pledged her solidarity to French Jews. But she was met with booing and whistles from the crowd — many resent her Socialist Party’s dovish attitudes and support for the Palestinian cause. Top figures within the French Jewish community believe the Halimi case reflects a reluctance by authorities to confront radicalized Islamist terrorists.

“Imagine the killer had been white and that he shouted ‘France to the French’ before throwing off Sarah Halimi or an immigrant from Mali to her death under the influence of drugs,” Alain Finkielkraut, a well-known French-Jewish philosopher, told the Le Figaro newspaper on Sunday. “The media would sound the battle cry!”

The star-studded team of speakers did little to mitigate the tense and heavy atmosphere at the rally. It visibly upset Levy, the student.

“All of this means there’s no justice in France, which makes it impossible and I don’t know what solution there is to this,” she said.

But Allyana Levy isn’t quite ready to give up on her native country.

“I don’t know if there’s hope, but I have to believe so,” she said. “Maybe the fact that so many of us came here will show that enough is enough and real change will come.”