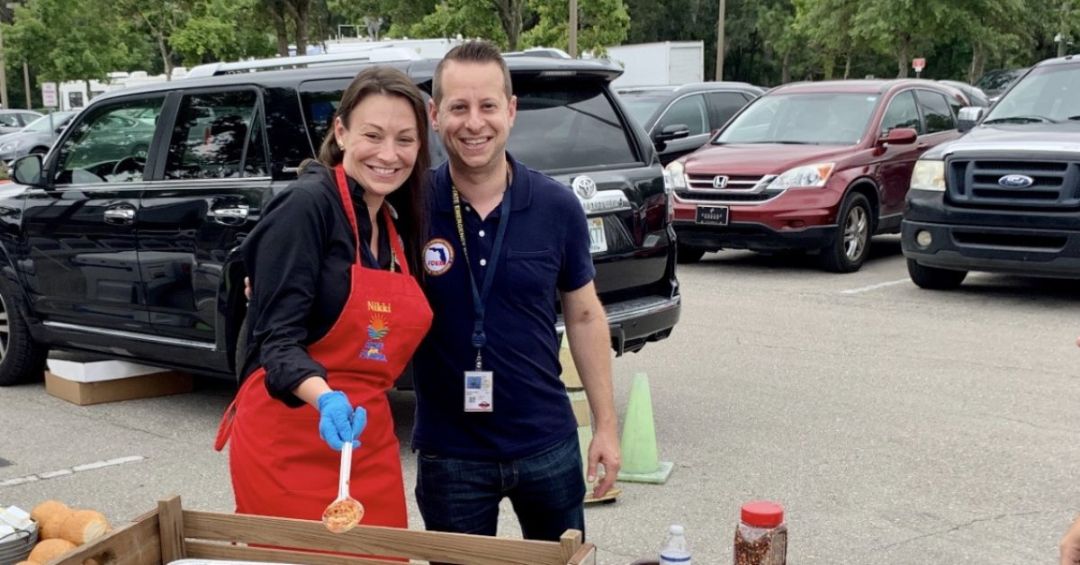 (JTA) — The tweet pinned to the top of Jared Moskowitz’s feed is a 46-word rebuke.

All 46 words are “MASKS,” and Moskowitz, Florida’s youthful director of emergency management until last Friday, acknowledged that a prime target of the tweet was his boss, Gov. Ron DeSantis.

“The governor and I, you know, disagree on masks,” Moskowitz, a Democrat, said in an interview days before he left office. (His Twitter handle is currently Jared MASKowitz). “That’s not breaking news. I was very heavily supportive of more mask mandates or heavy messaging on masks, and the governor ultimately left that up for the local governments.”

Moskowitz’s last day saving Floridians from disasters natural and manmade was Friday, but he didn’t quit because he argued with DeSantis, a Republican.

His stated reason for quitting is he missed his young family. But he’s making clear, too, that his absence won’t be for very long, and he happily indulges the state’s political reporters who see great things in his future.

In fact, it was Moskowitz’s relationship with DeSantis that helped propel the self-described “master of disaster” to national attention: Their partnership amid the COVID crisis was a rare example of bipartisan collaboration during the pandemic.

In 2018, before the pandemic, DeSantis had tapped the then-state representative Moskowitz because of his experience at AshleyBritt, a private sector disaster recovery firm.

“He’s worked incredibly hard,” DeSantis said of Moskowitz in February. “He’s done a fantastic job. I think Florida has the best emergency response in the country.”

Moskowitz’s tenure earned him laudatory resolutions last week in both Republican-led chambers of the state Legislature and an editorial in the Miami Herald titled “Moskowitz reached across Florida’s deep political divide. That’s all too rare.” Pundits in the state already are saying that his popularity in both parties could propel him to elected statewide office, and he’s not discounting the speculation.

If Moskowitz does run, it will be on a record packed with Jewish content in a state where the Jewish population is growing.

As emergency director, he visited Israel and signed a memorandum of understanding to share best practices in combating COVID. Ask him about the “pizza boy strategy.” Or don’t ask him, he’ll volunteer the story.

“What happened is that Israel had a strategy that there would be no unused doses,” he said. “And if you had doses that you unfroze that day but you ran out of appointments, you would just start vaccinating anyone who was around, and one day there was a pizza delivery boy in the hospital, and Israel vaccinated him because they had available doses and it was towards the end of the day.” He instituted the policy in December.

When he launched the program to vaccinate the homebound, Moskowitz said, he made sure Holocaust survivors were first.

“We went to 750 Holocaust survivors’ houses in the first week we started the program,” he said. “That’s where I would say is a good example of my Jewish upbringing influencing a decision that I made around here.”

As a state representative from 2012 through January 2019, Moskowitz led the passage of a bill that authorized the building of a Holocaust memorial in the state capital, Tallahassee, and a resolution memorializing Robert Levinson, the Jewish former FBI agent who disappeared in Iran in 2007 on a CIA mission and whose family in Coral Springs were Moskowitz’s constituents. He sought funding for kosher meals for the elderly in his district and for security protections for Jewish institutions.

Moskowitz’s reach across the partisan divide is especially evident in his Israel-related advocacy and legislation, where he stakes out positions more typically embraced by Republicans. He authored a law banning state dealings with Israel boycotters, a resolution applauding the Trump administration for moving the embassy to Jerusalem and one condemning UNESCO for not recognizing the Western Wall as part of Israel.

How he recalls the UNESCO episode is telling, letting slip that he butted heads with fellow Democrats.

“It made some of my former Democratic colleagues a little upset, he said, “but eventually they voted for it.”

Last June, Moskowitz lambasted Democrats and the left for not calling for the removal of a Palestinian-American student senate president at Florida State University because a number of his social media postings — Jewish groups said they were offensive.

(The Senate president, Ahmad Daraldik, eventually was removed, but for reasons ostensibly unrelated to the accusations of antisemitism. Daraldik has since sued the college alleging anti-Palestinian racism.)

Moskowitz remains an outspoken liberal on most issues, advocating gun control and against police racial profiling. His sponsorship record in the State House is solidly liberal, protecting LGBTQ rights, scrapping holidays that commemorate the Confederacy and backing labor protections. His father, Mike, is a prominent lobbyist with deep ties to the state’s Democrats.

But his trademark is making it clear that he is willing to rebuke his own tribe as well as the other guy’s.

It’s how Moskowitz says he pushed through gun control laws after the deadly mass killing at a high school in Parkland, in his district, in 2018. The bill was a compromise: While it was not the assault weapon ban that Democrats sought, it raised the minimum age to purchase a gun from 18 to 21 (the killer in the Parkland shooting was 19); banned bump stocks, which facilitate rapid firing; and created a system to flag gun owners who may be a danger to themselves and others.

“I thought it was so important for the Legislature to speak in a bipartisan way and have a response,” he said. “The idea of doing nothing which has happened so many other times …  was not going to let us do that.”

At the time, Moskowitz delivered an impassioned floor speech that went viral, describing his small son trapped in a writing class in a school near the high school campus, and learning that his son’s teacher, Jen Guttenberg, lost a daughter, Jaime, in the attack.

“She put my kid in a closet when her daughter died. I wanted to say thank you at the funeral,” Moskowitz said. “I didn’t know how to do that.” (He has since become close to the family, which also is Jewish. Fred Guttenberg has become a national leader in the gun control battle.)

The intensity and earnestness that Moskowitz brought to his efforts to have Florida mask up also were in evidence when Moskowitz defended his boss last month from an insinuation on “60 Minutes” that DeSantis ran part of the coronavirus vaccine distribution through Publix because the supermarket chain had contributed to his campaign.

Conservative publications seized on a Democrat willing to defend a governor seen as having presidential ambitions in 2024.

“Publix said they could be ready in 72 hours,” Moskowitz told National Review. “I picked Publix. Walked into the governor’s office the next day, gave them the plan about why we needed to turn on more locations, especially in some rural, fiscally constrained areas.”

On Twitter, Moskowitz praises President Joe Biden and excoriates Republicans (except for DeSantis) in terms unmistakably Jewish. On April 19, he highlighted for his 11,000 followers a CNN report about the Trump supporters who stormed the U.S. Capitol: Prosecutors opposed the release of one of the alleged rioters because he was a Nazi sympathizer who posed a threat to his Jewish neighbors.

“A reminder of who was there January 6,” Moskowitz said.

Moskowitz had a showy sendoff last week: He donated his emergency management jacket to a Florida museum. He took his family to the Legislature to hear the lawmakers heap praise on him. And he posted photos of himself hugging his two boys, 7 and 4, in the vestibule of his home surrounded by scattered posters reading “Welcome home Jared, we love you.”

The sendoff got the speculators working overtime.

“We’ll hear from him again,” said Joe Henderson, a columnist for the Florida Politics news site.

“You’ve given so much to Floridians during emergencies, hurricanes, and a once-in-a-lifetime pandemic …  saving the lives of many!” she said.

The photo she attached, posing with Moskowitz at a tailgate barbecue, may be a portent of Florida Jewish Democratic politics in 2022 should Moskowitz vie for the Senate. Fried has all but declared she will try to unseat DeSantis.

Meantime, Moskowitz is playing it cool. This summer, he is launching a political podcast with the publisher of the Florida Politics news site, Peter Schorsch, tentatively called “State of Emergency.”

As for other ambitions, his final tweet on his final day of work, April 30, was simply a photo of Mary Poppins ascending to the stratosphere, fondly looking back.

Moskowitz replied with a wink emoji.