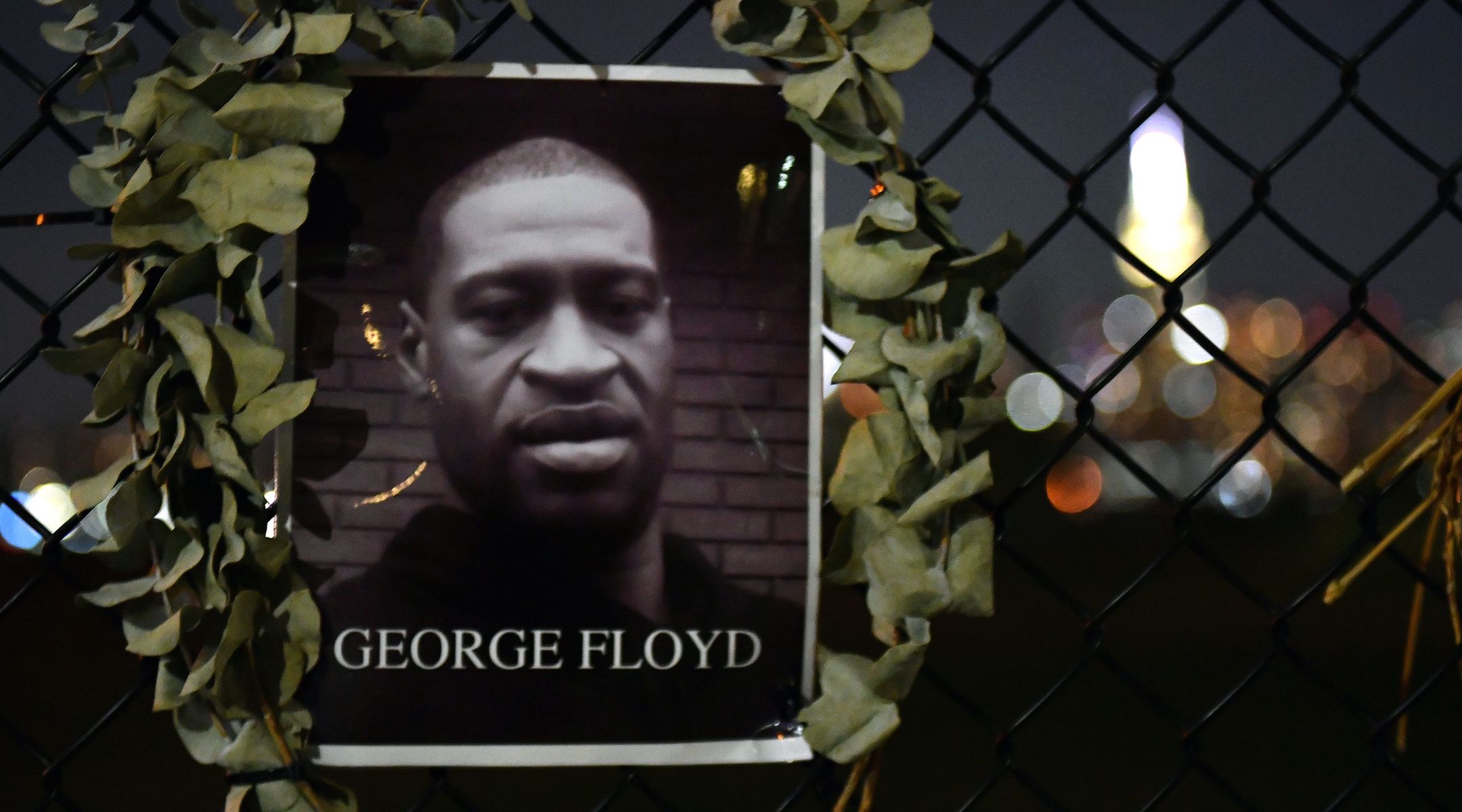 A photo of George Floyd is pictured on a fence in Brooklyn, N.Y., alongside other victims of police brutality, Sept. 24, 2020. (Angela Weiss/AFP via Getty Images)
Advertisement

(JTA) — Across America, people whose lives changed when George Floyd was killed are planning to mark the one-year anniversary of his death this month.

Floyd’s family is working to rebrand the date, May 25, as “Day of Enlightenment” because of how many people were awakened to issues of racial injustice by seeing video footage of Floyd die under the knee of a Minneapolis police officer. Concerts and public events will honor his legacy.

And in a landmark gathering for Jews of color being held this weekend, hundreds of Jews will tap into a millennium-old tradition and recite the Mourner’s Kaddish for Floyd.

According to the Hebrew calendar, Thursday is the one-year anniversary of Floyd’s murder — the time when Jews typically observe the yahrzeit of a loved one’s death by reciting the mourning prayer alongside a quorum of other Jews.

This week, the quorum will take place online during the Jewish People of Color National Shabbaton, a groundbreaking convening for Jews of color at a time when Jewish institutions and communities are grappling with how to make sure they are included.

The plan for the Shabbaton, a retreat that takes place over Shabbat, started before Floyd’s murder, but the tragic event made doing so all the more critical, according to the event’s lead organizer, Harriette Wimms, an African-American psychologist who lives in Baltimore.

“We felt as Jews of color on this anniversary, it was important to lift up the racial justice work that’s being done across the country and to also lift up George Floyd’s memory,” said Wimms, who goes by “Harriette Mevakeshet” in Jewish spaces and is a rising kohenet, or Hebrew priestess, studying at the Kohenet Hebrew Priestess Institute. 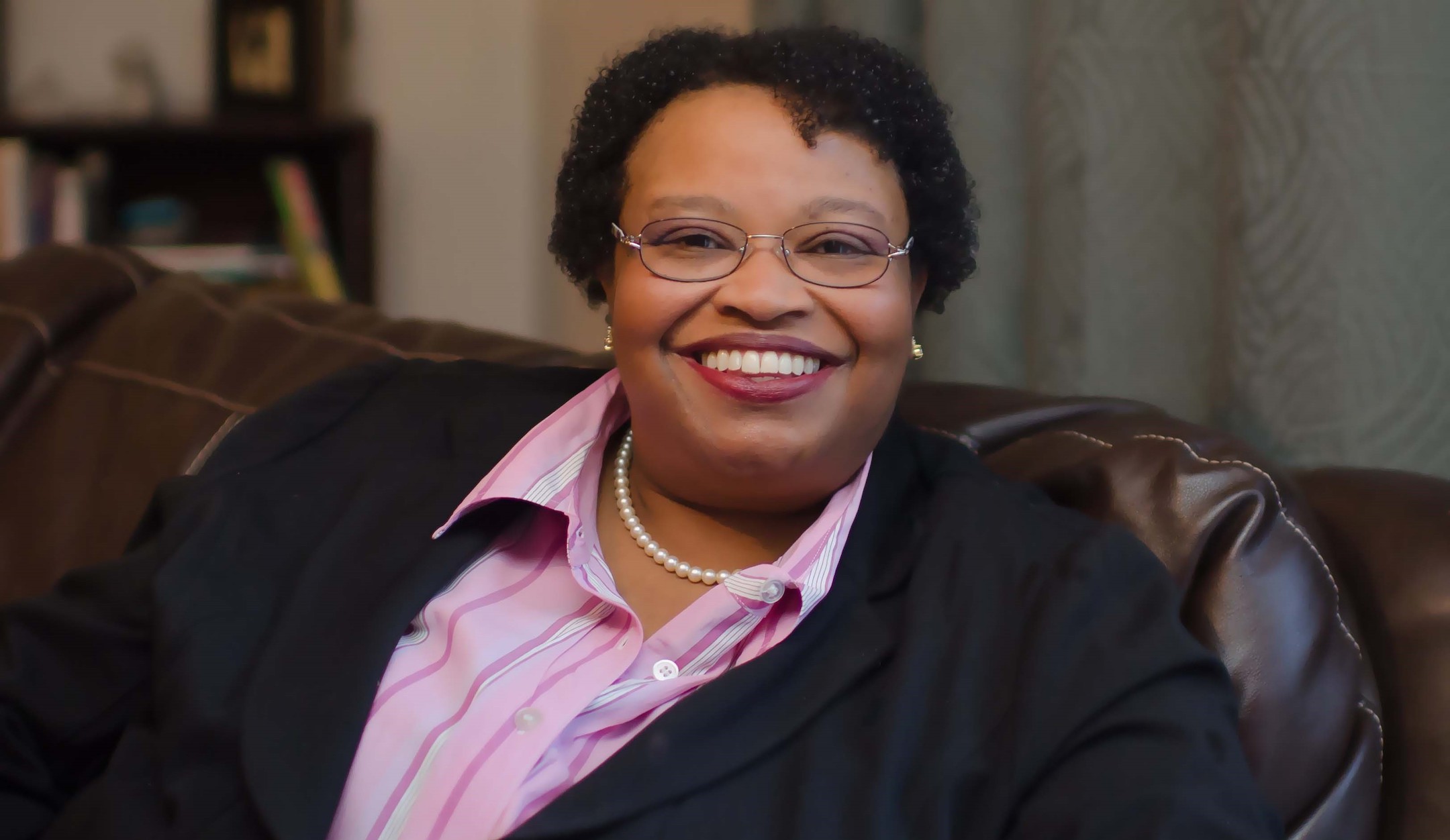 Harriette Wimms heads the Jews of Color Mishpacha Project and organized the Jewish People of Color National Shabbaton that takes place online May 14-16, 2021. (Courtesy of Wimms)

In addition to the commemoration ritual, the Shabbaton will feature a slate of community-building programs for Jews of color, their families and their supporters. The agenda includes yoga, art, Torah study and facilitated conversations about topics such as healing from trauma, LGBTQ identity, and what white allies and multiracial families can do to support Jews of color.

Participants will have a chance to hear from speakers who include longtime leaders Ilana Kaufman, executive director of the Jews of Color Initiative in San Francisco, and Sabrina Sojourner, a cantor and educator from Rockville, Maryland, as well as young organizers such as Yoshi Silverstein, a Chinese-American Jew based in Cleveland.

As the Jewish community reckons with racism and strives to make its institutions more inclusive, the infrastructure for serving the diversity of Jews is growing. The upcoming Shabbaton, for example, is not a one-off event but part of an ongoing commitment by Wimms and others to come together as the Jews of Color Mishpacha Project, an initiative that uses the Hebrew word for family.

“The goal of JOC Mishpacha is to give Jews of color the opportunity to be in community with one another and learn, build relationships and build a network for folks to utilize as they need,” said Rachel Faulkner, a steering committee member who lives in Washington, D.C. “There are Jews that practice, observe and identify in different ways, and racial identity is one of the ways in which the community is diverse.”

Estimates of the number of Jews of color vary because of debate over the definition of the term and a shortage of surveys that ask Jews about their racial and ethnic identities. The most comprehensive such survey was just published and found more diversity among younger Jews, suggesting a shift in the U.S. Jewish population. An estimated 15% of Jews under 30 identify as Hispanic, Black, Asian or multiracial, compared to 8% among Jews of all ages.

Recognition of this growing diversity is reflected, at least to some extent, in the behavior of major Jewish institutions, which have been hiring diversity officers and funding racial justice initiatives, especially in the wake of Floyd’s murder. The UJA-Federation of New York and the Charles and Lynn Schusterman Family Foundation donated to support the Shabbaton. Funding also came from the Jews of Color Initiative, which itself has attracted more money and attention over the past year.

It’s harder to track changes at the local level, but conversations about the need for inclusion and representation have been happening at many suburban, largely white synagogues, according to Andy Miller, chair of the social justice advocacy committee for Chizuk Amuno Congregation in Pikesville, Maryland, and a professor at the University of Maryland, Baltimore County.

“These conversations are just beginning,” Miller said, “and the growth of institutions created by Jews of color to give them a stronger voice may help in engaging the primarily white institutions.”

Wimms said it’s still automatic for many to assume that anyone who looks Black or Asian isn’t Jewish. Building up a diverse leadership with the Shabbaton and other efforts, she said, will not only help Jews of color feel included, but could also help decrease the level of bias in the wider community.

“We are part of the community, but rarely have white-skinned Jews seen Jews of color leading services,” Wimms said. “White allies need to witness Jews of color davening, and leading and building spiritual space.”