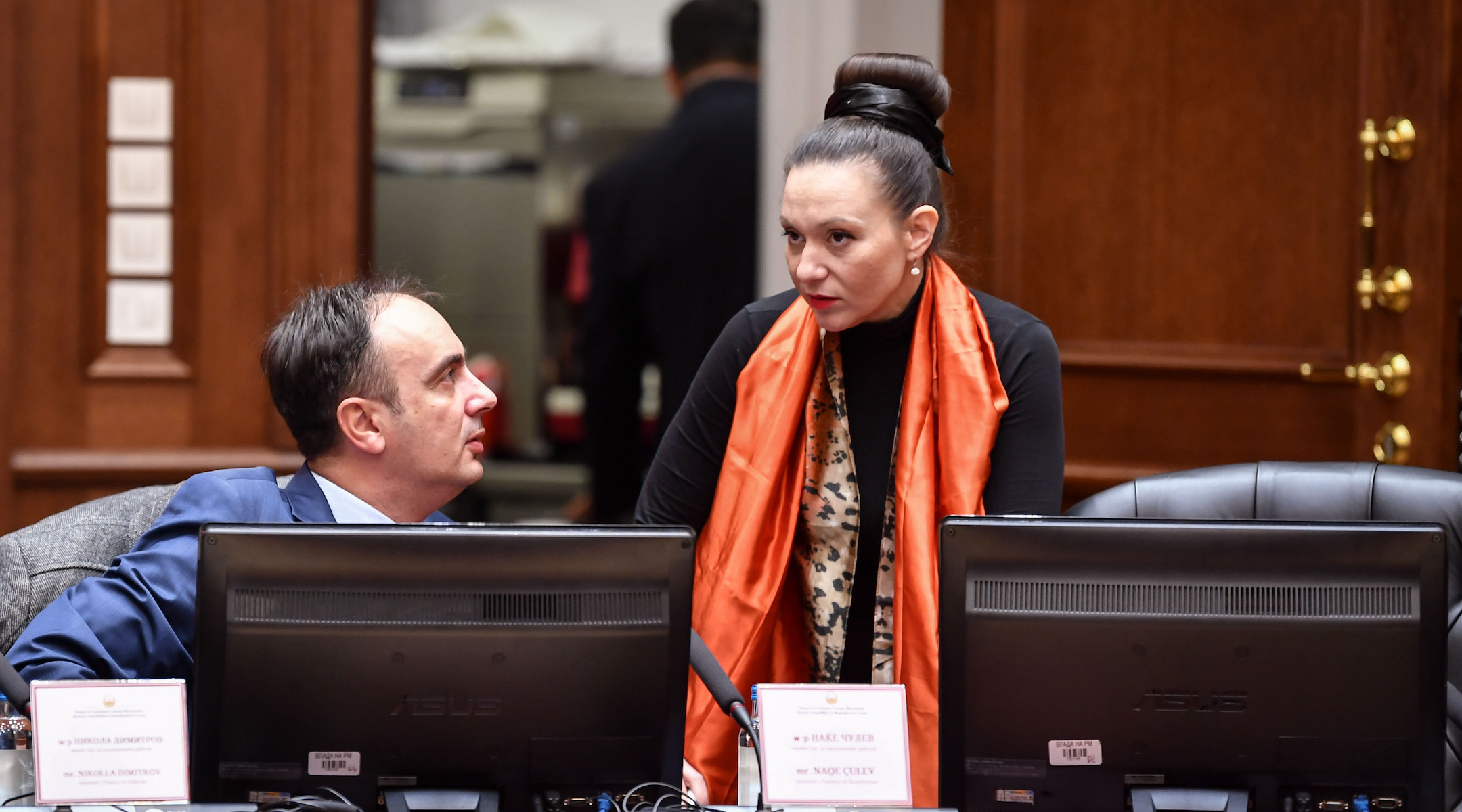 Rashela Mizrahi speaks to a colleague during a cabinet meeting in Skopje, North Macedonia, Jan. 14, 2020. (Courtesy of the Parliament of North Macedonia)
Advertisement

(JTA) — Politics was supposed to be a very brief interlude in Rashela Mizrahi’s career as a scientist.

A 39-year-old Jewish fertility researcher from North Macedonia, she was appointed last year to serve for 100 days as the temporary minister of labor in her Balkan country, situated north of Greece. She was deemed a good nonpartisan pick to serve as a placeholder ahead of elections.

“I had zero interest in politics,” Mizrahi told the Jewish Telegraphic Agency. “But I thought it’d send a good message for women. Plus, like any Jewish daughter, I wanted to make my parents proud.”

But what began as a token stint resulted in multiple diplomatic spats and the country’s worst-ever wave of public antisemitic rhetoric.

Along the way, Mizrahi became an unlikely hero for many of her country’s conservatives and a fighter for preserving the memory of a Jewish community that the Nazis and their allies almost rendered extinct.

It all started in February, she said, during a routine press conference that she gave at the labor ministry in the capital Skopje weeks after she became its temporary boss.

“I talked unemployment, stimulus plans, welfare. The usual stuff,” she recalled. But in media reports, Mizrahi’s message was upstaged by the backdrop: A large wooden sign that read “the Republic of Macedonia.”

This was an issue, because the previous year Macedonia had changed its name to North Macedonia due to pressure from its richer and larger neighbor, Greece. That country has long argued that its northern neighbor’s former name implied territorial claims to Greek’s northern province, which is also called Macedonia.

The sign landed Mizrahi at the center of a polarizing debate between Macedonian hawks who see the 2020 name change as surrender to a foreign power, and doves who defended the change as a pragmatic gesture that opened the door for Macedonia to join NATO and in the future also the European Union.

Mizrahi was not a member of any political party back then and said that she had no intention of making a political point at the press conference. She didn’t even make the sign, which Mizrahi says was “just part of the furniture.”

“The sign was just there. I didn’t have it put up there,” she said.

But as a business and science-oriented straight talker with little interest in diplomatic niceties, Mizrahi did not hide her disdain for the controversial name change.

“You can thank my predecessor, who didn’t commission any new signs. Maybe she recognizes that this is the Republic of Macedonia and that we’re Macedonians,” Mizrahi said to reporters about Mila Carovska, a member of the left-leaning SDSM party that led the name change.

Greece’s ambassador protested the remark and then Nikola Dimitrov, North Macedonia’s foreign at the time, warned that Mizrahi was putting “Euro-Atlantic aspirations in danger.” She was fired just five weeks into her three-month stint. 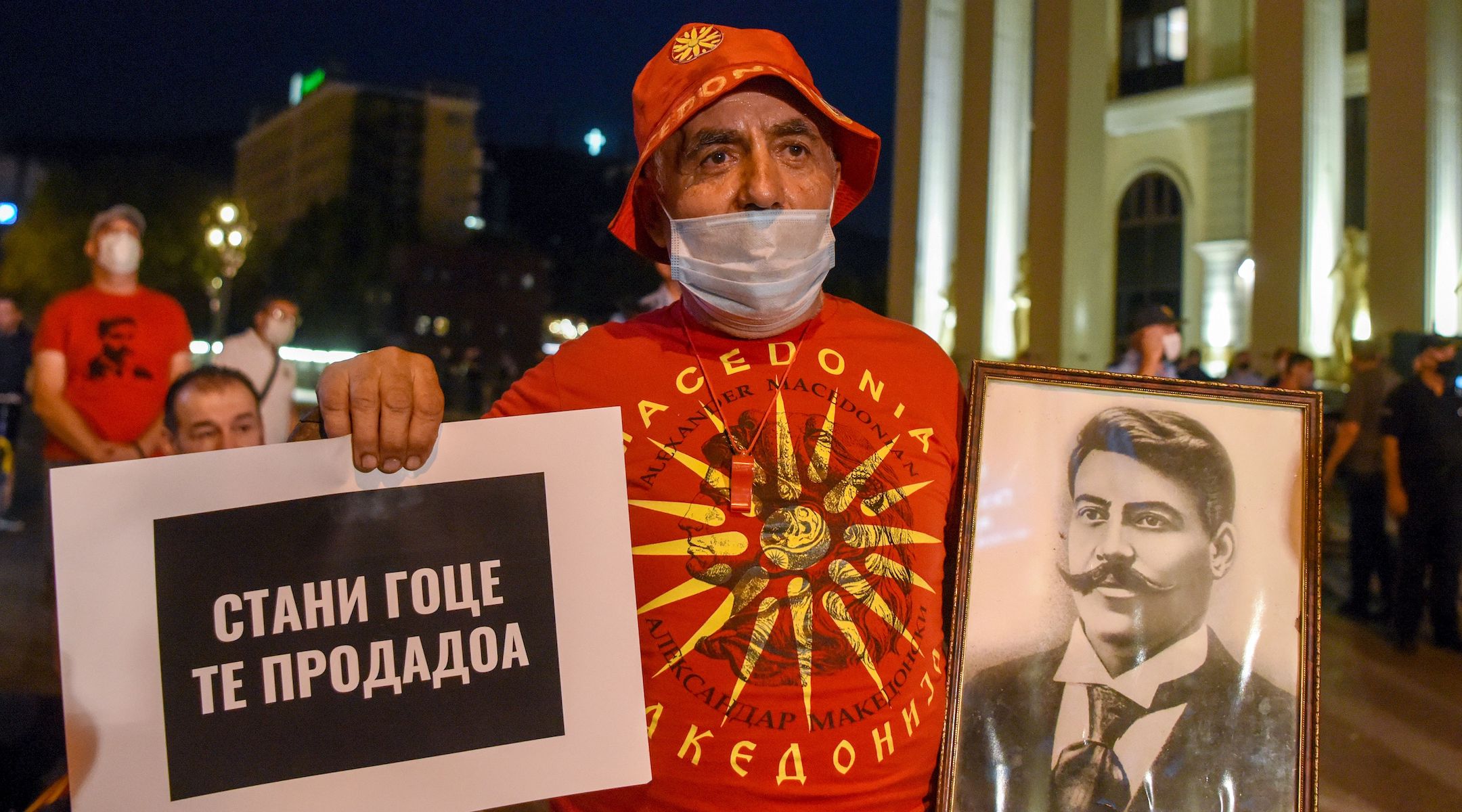 A demonstrator at a protest against the North Macedonian government’s decision to change the country’s name, amongst other things, in Skopje, Sept. 15, 2020. His placard reads as “Get up Goce, they sold you,” referencing former revolutionary Goce Delchev. (Robert Atanasovski/AFP via Getty Images)

But what might have ended as the axing of a novice politician snowballed into the country’s first-ever wave of antisemitic rhetoric — with Mizrahi as its target.

Branko Trickovski, a well-known journalist and a supporter of the left-wing SDSM party, ridiculed Mizrahi on Facebook, describing her as a zealot for Macedonian and Jewish nationalism, who gets her strength from “eating hummus made of dead Jews.”

Mersiha Smailovic, a former official from the ministry that Mizrahi had headed, on Facebook wrote that Mizrahi was planning to place an Israeli flag at her office. Another SDSM activist called her a “Jew who worked for the Nazi occupation in World War Two.”

It triggered “a stream of hundreds of antisemitic messages. Death threats. Even against my daughter,” Mizrahi said of her two-year-old, her younger child she had with her husband, a 43-year-old welder who comes from a Christian Eastern Orthodox family.

“I’m still afraid. Not so much for me but for my daughter. I never thought this could happen in this country, where antisemitism never used to be a part of life,” Mizrahi said. “It has changed how I see my country.”

It has also caused her to change her career plans.

“I decided I can’t walk away, I needed to stay and fight,” she said.

Parking her career as a consultant and researcher for an international pharmaceutical company, Mizrahi joined the VMRO right-wing opposition party and became a lawmaker in parliament. She’s North Macedonia’s first-ever Jewish parliament lawmaker since it broke away from Yugoslavia in 1991.

According to a report titled “Antisemitic Discourse in the Western Balkans” published this year by the International Republican Institute, a nonprofit whose mission statement is promoting democracy, the Mizrahi affair showed that “antisemitic narratives exist [in North Macedonia] and are utilized for political gain. Antisemitism is used to sow divisions within the country, which subsequently increases its vulnerability to manipulation.”

The rhetoric on Mizrahi also shocked other members of the Jewish community, a tiny minority of about 200 people, which hasn’t grown since the Holocaust, when the Nazis and collaborators murdered about 98% of Macedonian Jewry.

“We had lived here without antisemitic statements before,” said Maja Susha, an educator and Holocaust researcher who is a member of North Macedonia’s Jewish community. “But after what happened with Rashela we saw the real reality.”

The antisemitism has since subsided and life is safe for Jews, said Susha, who like almost all of North Macedonia’s Jews lives in Skopje. It’s a placid capital where about a quarter of North Macedonia’s 2 million citizens live, mostly in crumbling Soviet-era buildings that are juxtaposed with a staggering wealth of statues and classical style monuments.

The anti-Semitism came as less of a surprise to Mizrahi’s father, Viktor, who for many years had led the Jewish community. The Holocaust shaped much of the way that Rashela Mizrahi and her brother Rahamim were raised by their parents Viktor and Liljana, a convert to Judaism who observes the religion more devoutly than her husband.

“I was encouraged to be a doctor. Rahamim to become a lawyer. Why? Because these are professions so vital that the recipients of your services don’t care if you’re Jewish,” Rashela Mizrahi said. Her parents “were terrified when I stepped into politics,” Mizrahi said. “But they were also very proud.”

In parliament, Mizrahi focuses on initiatives that will help young people gain an education in North Macedonia – which she still refuses to call by its new name – and on projects to mitigate the country’s brain drain problem. But it’s Mizrahi’s foreign policy actions that grab headlines in the Balkans.

In addition to vocally opposing concessions to Greece, Mizrahi is a prominent critic of what she considers the left-wing government’s appeasement of neighboring Bulgaria — another powerful neighbor whose actions have had a devastating effect on Mizrahi’s own family.

On Dec. 30, Mizrahi delivered a speech in parliament about Bulgaria’s role in the Holocaust, when Bulgarian forces occupied what is today North Macedonia and helped round up 98% of the area’s 7,000-plus Jews and deport them to be murdered by German troops. 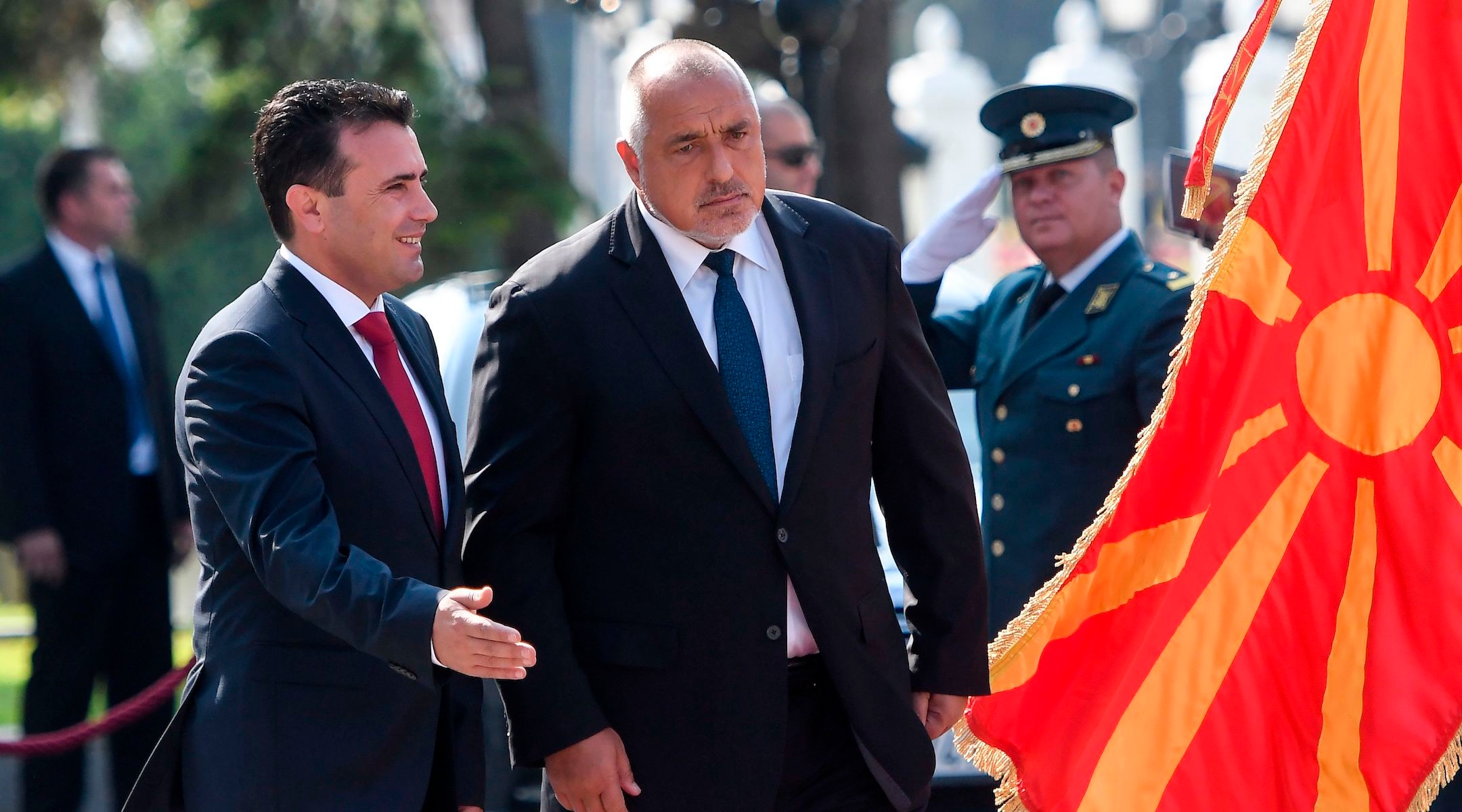 Standing against the giant Christmas tree that decorates parliament in Skopje during the holiday season, Mizrahi held up pictures of her dead relatives and asked Prime Minister Zoran Zaev: “Who killed them?”

The video, that went viral on local social networks, was a protest over Zaev’s decision last year to remove from government property any memorial plaques for World War II victims that called their killers as belonging to the “Bulgarian fascist occupation,” because “Bulgaria was not a fascist occupier of Macedonia but an administrator,” as he put it.

“My family was not murdered by an administrator’s pen, Mr. Zaev,” Mizrahi said in parliament.

Her protest echoed the position of the Jewish Community of the Republic of North Macedonia, a nonprofit that represents Macedonian Jewry’s interests. Last year, it accused Bulgaria of “deliberately whitewashing its dark history and thus distorting the truth about the Holocaust.”

But Mizrhai’s speech was the first time that this accusation was discussed in such a way in North Macedonia’s parliament, according to Sasha Uzunov, an Australia-based journalist and an expert on Macedonian politics. And it has made Mizrahi “a very visible politician,” he said.

Both that speech and her push against the name change have turned Mizrahi “in a way into a hero” for many people in North Macedonia, Susha added. She is also speaking for many Bulgarian Jews, said Lyna Degen, a Bulgaria-born Dutch-Jewish psychologist who has written extensively about the Holocaust in her native country.

“The danger in Macedonia, as I see it, is that the leader of the country is willing to revise the history of the Holocaust in order to please Bulgaria, whose support they need in order to become a member of the EU,” Degen said.

“It is very unusual that a Jewish politician raises awareness for the atrocities perpetrated by Bulgarian troops,” Degen added. “I don’t know of any other politician doing this” besides Mizrahi.