Who is Naftali Bennett, Israel’s likely next prime minister? 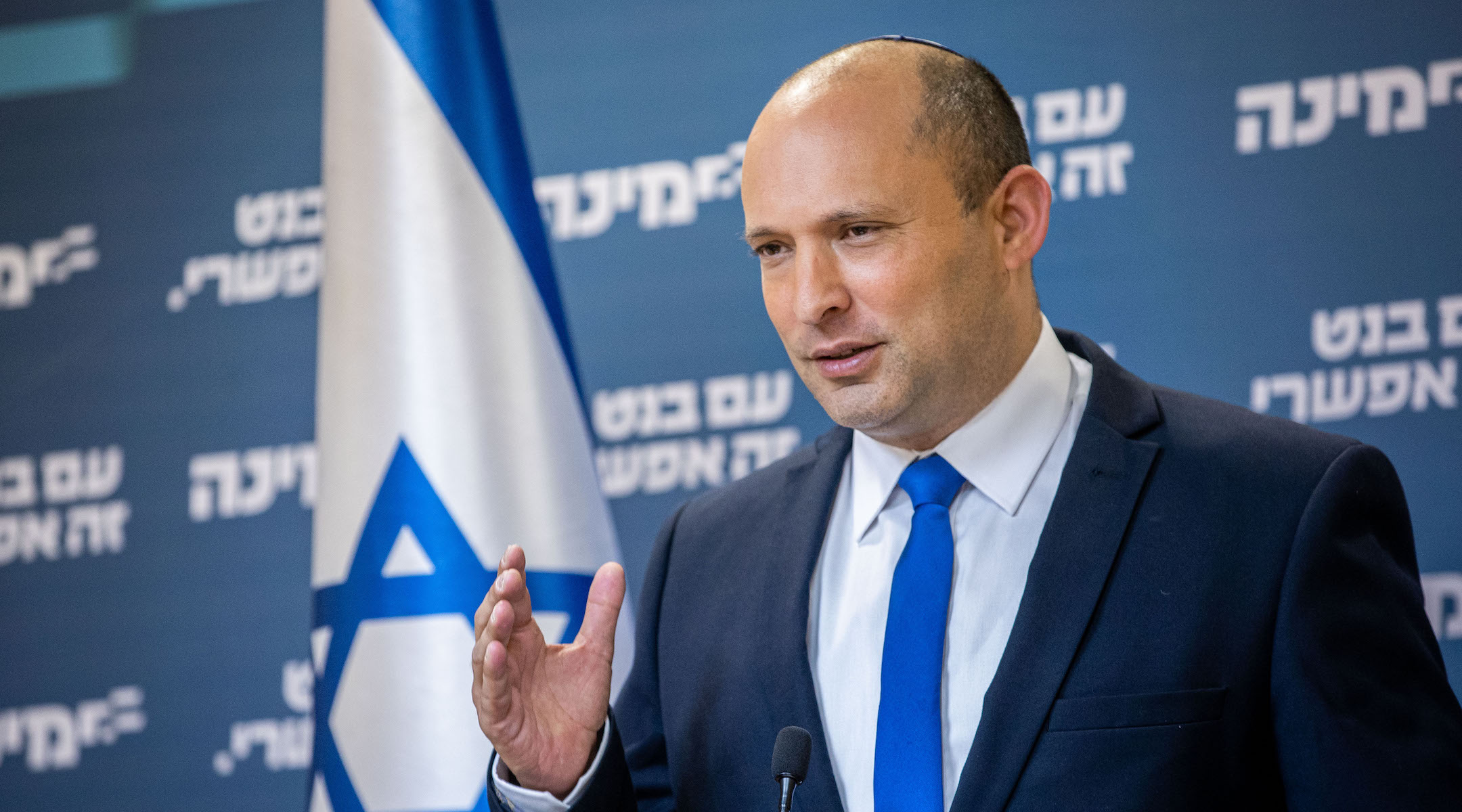 (JTA) — As soon as next week, Benjamin Netanyahu may no longer be prime minister of Israel.

So who will be the next person to lead the Jewish state? The answer may be Naftali Bennett, a former Netanyahu ally who supports many of his right-wing policies and is a longtime, staunch advocate for Israel’s West Bank settlements. Like Netanyahu, he opposes Palestinian statehood, and at times he has been to Netanyahu’s right.

Bennett, 49, would break some boundaries. He would be Israel’s first Orthodox Jewish prime minister and the country’s first leader born of American parents. He would also be the first prime minister to have become rich in the tech sector.

Bennett is slated to become prime minister under an emerging, fragile coalition deal that has seen Israeli parties team up across the political spectrum with the sole aim of ousting Netanyahu, who has been prime minister for 12 years. Under his deal with centrist Yair Lapid, Bennett would serve as PM for two-plus years, then Lapid would rotate into the role. He would also become prime minister as the head of an historically small party. In Israel’s most recent election, Bennett’s party won only seven of the Israeli parliament’s 120 seats, and one of his lawmakers appears to have defected.

Of course, the whole thing could fall apart: The parties, which span from left to right, Jewish to Arab, have no shared vision for the 73-year-old nation. If the coalition deal isn’t sealed by a deadline of midnight on Wednesday, Israel’s deeply divided politicians will return to the drawing board.

Here’s what you need to know about the likely next prime minister, from his past in the United States to his vision for West Bank annexation in the future, before he (potentially) takes office next week.

Bennett was born in Haifa to American immigrants from San Francisco, and lived in the United States and Canada for a time as a child before the family returned permanently to Israel. Like Netanyahu, he speaks fluent English with barely any accent.

Bennett recalls that he became Orthodox as a child, after attending a Chabad preschool while his family lived for a time in Montreal. As an adult, he is Modern Orthodox and wears a kippah — if he becomes prime minister, he would be the first to do so regularly. He lives in Raanana, a suburb of Tel Aviv.

After serving in the Israel Defense Forces, Bennett earned a law degree and entered the tech industry, moving to New York City. He co-founded a successful fraud detection software company, Cyota, and sold it in 2005 for $145 million.

Back in Israel, after leaving the tech world, Bennett got involved in right-wing politics. He quickly rose to become Netanyahu’s chief of staff, a position he held from 2006-2008, when Netanyahu was the leader of the opposition in Israel’s parliament, the Knesset. He left the role — reportedly in a spat with Netanyahu — and became the director of the Yesha Council, the umbrella organization representing Israeli settlements.

In 2012, he won the primaries of Jewish Home, a right-wing, religious Zionist party. In Knesset elections the following year, Jewish Home quadrupled the size of its delegation, winning 12 seats in the 120-seat Knesset, and Bennett became Israel’s economy minister in a government led by Netanyahu.

Since then, Bennett has served in various cabinet positions under Netanyahu alongside his longtime political partner, Ayelet Shaked — as Diaspora affairs minister, education minister and defense minister. He later split from Jewish Home and now heads a right-wing party called Yamina, which holds seven Knesset seats.

Last year, after an uneasy alliance with Netanyahu, Bennett broke with the prime minister and this week announced that he would ally with Lapid.

Bennett is an unabashedly hawkish religious Zionist who has long opposed Palestinian statehood, citing what he deems Israel’s security concerns. Early in his political career, he vowed to do “everything in my power” to make sure Palestinians can’t establish an independent state.

If he had his way, Bennett would also immediately annex much of the West Bank to Israel. Netanyahu also flirted with West Bank annexation, but demurred from the idea due to opposition from a wary Trump administration.

Because his potential coalition includes left-wing parties, Bennett won’t be able to annex any of the West Bank under the incoming government.

On the economic front, Bennett advocates for free-market reforms, particularly in Israel’s expensive housing market: He is against regulation, taxes and other restrictions on business. He is a proponent of widening Israel’s network of trade partners around the world, including in emerging markets and in smaller countries with newer relationships with Israel.

The outspoken politician has been criticized for his inflammatory rhetoric about Arabs and Palestinians. In 2013, Bennett called for killing Arab terrorists who have killed Jews, instead of imprisoning them.

“I have killed lots of Arabs in my life – and there is no problem with that,” he said at the time.

He has also said there is no perfect “solution” to the Israeli-Palestinian conflict, and compared it to an ongoing irritation, like “shrapnel in the buttocks.”

He has urged Netanyahu to attack Hamas more aggressively in Gaza as well. In 2019, he said Netanyahu had “failed against Hamas in Gaza” for a decade and criticized Israel’s policy of “containment.”

“In the next years we need to put aside politics and issues like annexation or a Palestinian state, and focus on gaining control over the coronavirus pandemic, healing the economy and mending internal rifts,” he said in November.

As an observant Orthodox Jew, Bennett is against same-sex marriage. However, he is slightly more liberal on the issue than some of his Orthodox peers in politics, saying that he would allow for tax breaks for same-sex couples.

Bennett also voted for a controversial law that defined Israel as the nation-state of the Jewish people, which critics called damaging to Israel’s multiethnic democracy. Following the law’s passage, however, Bennett acknowledged that the law hurt non-Jewish Israelis who serve in the Israeli military, such as Druze Israelis.

“It has become clear that the manner in which the Nation-State Law was enacted is very damaging – especially to them and to anyone who has tied his fate to the Jewish state,” Bennett said in 2018 after meeting with Israeli Druze leaders. “This, of course, was not the intention of the Israeli government. These are our brothers who stand shoulder to shoulder with us on the battlefield and made a covenant with us – a covenant of life.”