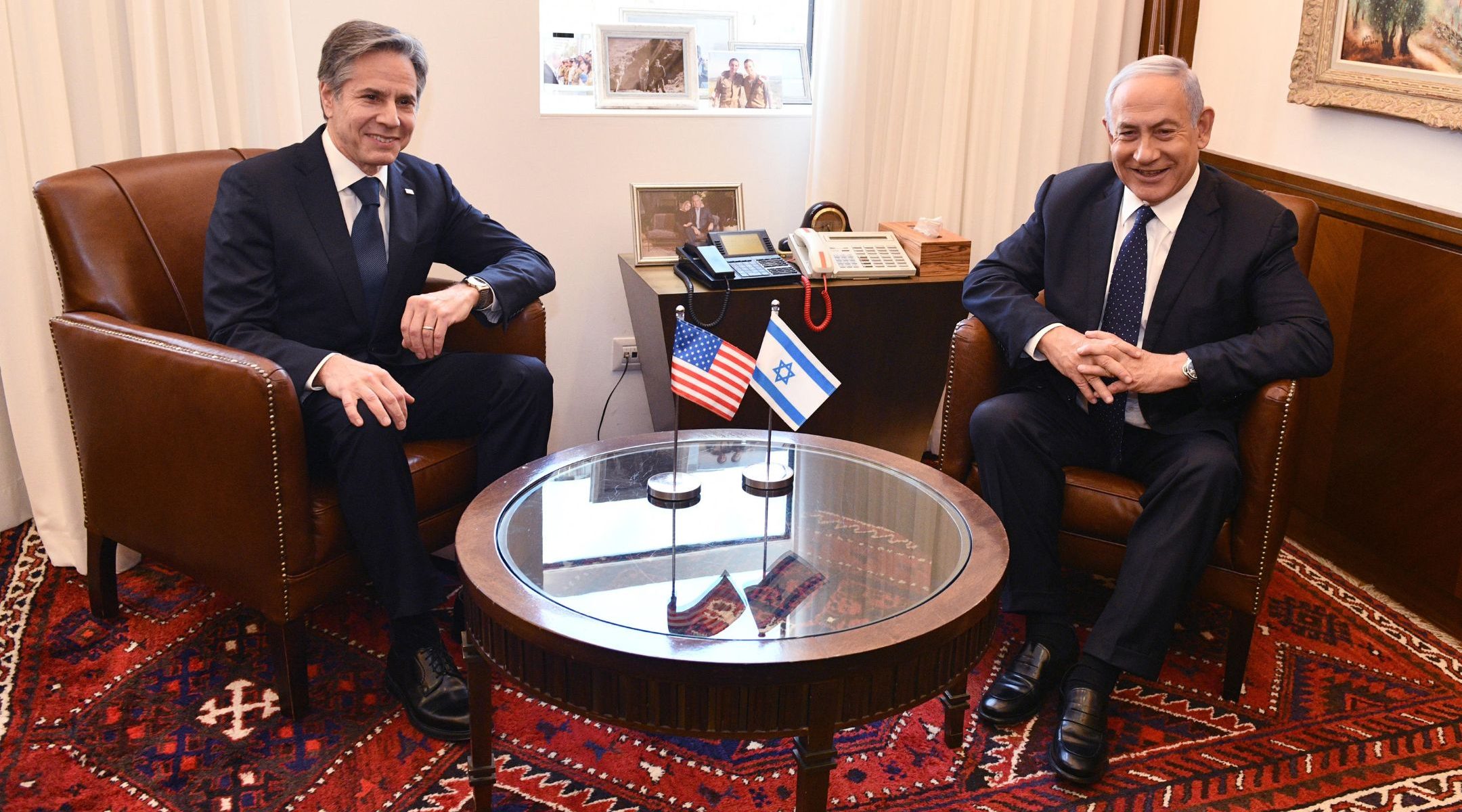 In this handout image provided by the Israeli Government Press Office, Secretary of State Antony Blinken, left, meets in Jerusalem with Israeli Prime Minister Benjamin Netanyahu on the first leg of his four-day trip to the Middle East, May 25, 2021. (Haim Zach/GPO via Getty Images)
Advertisement

WASHINGTON (JTA) — When the veteran Jewish leaders logged onto a call to hear from the secretary of state about his trip to Israel, many were surprised by the guest list.

While many of the groups typically present on such calls were represented, so was an official from the Holocaust museum here. What, they thought, did he have to do with Middle East peace?

They were more taken aback when they realized who was absent: representatives of the major Jewish denominations, public policy groups and an influential Jewish women’s organization.

The absences from the June 4 call with Antony Blinken was the latest incidence of what Jewish leaders are privately calling a surprising tone-deafness for an administration led by President Joe Biden, whose ties with the organized Jewish community go back decades.

The absence from the call of the Orthodox, Conservative and Reform movements, each with deep ties to Israel and long histories of seeking to influence peacemaking in the region, particularly rankled.

“I know there is not currently a State Department special envoy nor a White House Jewish liaison but nonetheless, how can that be?” an official at one of the movements said in a letter sent to the State Department official, Kara McDonald, who organized the call.

“No organizations have more direct and frequent, personal and emotional contact with the Jewish community than the religious streams or movements, their rabbis and synagogues, even as we emerge from Covid,” said the letter, which the Jewish Telegraphic Agency obtained.

Beyond the denominations, the other conspicuous absences were of two major public policy groups with wide constituencies, the Jewish Federations of North America and the Jewish Council for Public Affairs, and the National Council of Jewish Women.

The call was off the record, and no Jewish official on or off it would comment at length on the record, not wishing to alienate the administration. But Nathan Diament, who heads the Washington office of the Orthodox Union and has routinely attended such meetings for years, offered a terse comment: “It was unfortunate.”

Since the call, the White House has told Jewish groups that announcements will come soon, according to a source close to the Biden administration. Biden’s nominations have been delayed in part by the exigencies of dealing with the coronavirus and rebuilding the economy  devastated by the pandemic.

A White House spokesperson did not offer comment. A State Department spokesperson suggested that the department would be more comprehensive in organizing future calls.

“The Department of State, including the secretary, is fully committed to continuing to hear from a wide array of voices as the department moves forward on addressing challenges in the Middle East, as well as combating the scourge of antisemitism at home and around the world,” the spokesperson said. “Senior department officials will continue to speak on a regular basis with a variety of stakeholders, including community and religious organizations.”

An insider close to the administration said the likeliest candidate for the antisemitism monitor job among the 10 known in April to be in contention is Emory University historian Deborah Lipstadt.

Those candidates are all in their 20s and 30s. Two candidates who are more senior and have appeared on the shortlist in the past, Matt Nosanchuk, who held the role in the Obama administration, and Aaron Keyak, who led Jewish outreach for the Biden administration, are not seen as likely because the Jewish liaison position is likely not to be a senior position.

No one on or off the call believed the snubs were deliberate, pointing to other recent times when groups that were excluded had been treated respectfully by the Biden administration. Jewish Federations of North America and the Orthodox Union were among five organizations that got an immediate response last month after they requested quick action from the White House to address rising antisemitism amid the Gaza conflict. And a full range of organizations that deal with domestic issues were on a call last Friday — the same day as the Blinken call — with two top Justice Department civil rights officials, Vanita Gupta and Kristen Clarke.

They said McDonald, the deputy assistant secretary of state for democracy, human rights and labor who is directing the office of the antisemitism monitor until one is in place and who organized the Blinken call, is simply unfamiliar with the organized Jewish community.

Insiders noted that in March, when Blinken wrote a letter to say that the Biden administration “enthusiastically” embraced a definition of antisemitism favored by mainstream Jewish groups, he sent it to the American Zionist Movement, an umbrella group that does not deal with antisemitism. That, they say, was a misstep by McDonald, who did not reply to a request for comment on how she selected who would attend the Blinken meeting.

McDonald is steeped in issues of religious freedom and antisemitism monitoring, which is why she might have included Robert Williams, the deputy director of international affairs at the U.S. Holocaust Memorial Museum. But his participation was still considered odd by others in the group: The museum is a federally and privately supported institution, not a Jewish or pro-Israel group. Blinken spoke briefly about rising antisemitism at the meeting.

The bad feelings undermined what participants said was an otherwise good and productive conversation: Blinken assured participants that the Biden administration would hew to strict guidelines to keep post-Gaza conflict humanitarian assistance to the Palestinians from reaching Hamas, and would maintain restrictions on aid to the Palestinian Authority as long as it subsidizes the families of convicted terrorists.

“Good conversation with Jewish community leaders on Israel and the West Bank & Gaza,” Blinken said on Twitter after the meeting. “I reiterated [Biden’s] commitment to combat antisemitism amidst a troubling rise in incidents and that Israelis & Palestinians deserve equal measures of security, opportunity, freedom and dignity.”

Blinken, who is Jewish, had a call the same day with Palestinian-American groups.

“Important conversation with Palestinian-American leaders about the violence in Israel, the West Bank & Gaza,” he said on Twitter. “We are committed to rebuilding our relationship with the Palestinian people. Israelis & Palestinians deserve equal measures of security, freedom, opportunity and dignity.”

The Presidents Conference representative, CEO William Daroff, got the first question, and Susie Gelman, the chairwoman of the Israel Policy Forum was next, followed by the ADL and AIPAC. The IPF is relatively small, but its posture — emphatically endorsing a two-state outcome to the Israeli-Palestinian conflict while opposing conditioning defense assistance to Israel — is closest to the Biden administration’s Middle East policy.

The president of J Street, Jeremy Ben-Ami, was lower down on the list. The group also backs two states, but more recently has also joined a number of lawmakers on the Democratic left who say assistance for Israel should be up for review.