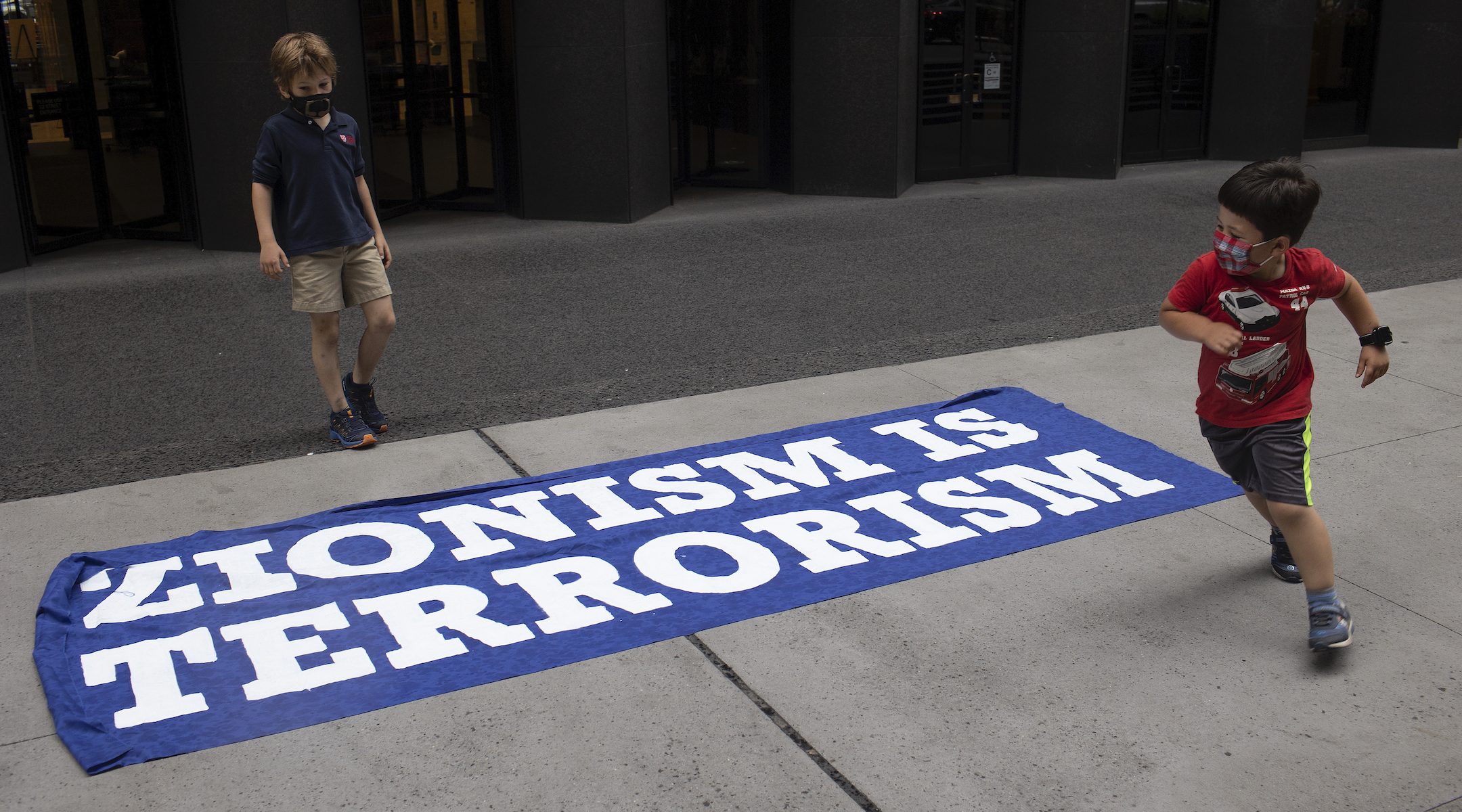 Palestinian activists held a rally outside of the Museum of Modern Art in midtown Manhattan to protest board members who support Israel, June 11, 2021. (Andrew Lichtenstein/Corbis via Getty Images)
Advertisement

(JTA) — The COVID-19 epidemic proves you cannot just treat a plague’s symptoms – you must root it out. Yet as incidents of Jew-bullying in the U.S. more than doubled in May compared to the same time period in 2020, too many American Jews complained about the symptoms while obscuring the cause. In a polarized polity, too many in the overwhelmingly liberal American Jewish community either ignore or cover up left-wing complicity in the New Antisemitism, meaning anti-Zionist Jew-hatred.

Call it Zio-washing: bleaching the anti-Zionism out of modern antisemitism.

Consider the Jewish Theological Seminary’s “Statement on Antisemitic Crimes” condemning this “spate of brutal acts,” issued during last month’s military conflict between Israel and Hamas. The JTS lamented this “latest manifestation” of the “centuries-long phenomenon” of Jew-hatred. And it claimed that “What is happening to Jews in North America shares much with other hate crimes perpetrated in our society.”

But something’s missing: The statement ignored Israel, Zionism and the New Antisemitism.

The antisemitic attacks and rhetoric during the latest conflict was largely fueled by the anti-Zionist left’s sweeping denunciations of Israel and Zionism. Wrapping their cause in Black Lives Matters rhetoric and righteousness, pro-Palestinian and pro-Islamist goons have committed many of the most recent anti-Jewish street crimes.

Claiming that the Jew-bashing “shares much with other hate crimes perpetrated in our society,” the JTS statement masks this far-left anti-Zionist hooliganism with a phrase that usually points to haters on the right.

President Joe Biden’s May 28 statement also Zio-washed. He condemned this mysterious, coming-from-nowhere Jew-hating surge “in the last weeks.” Biden mentioned six incidents, from “a brick thrown through the window of a Jewish-owned business in Manhattan” to “families threatened outside a restaurant in Los Angeles,” without mentioning Israel, Zionism or pro-Palestinian thuggery.

Not naming the distinctly left-wing roots of this hatred suggests that those doing the condemning do not want to alienate supposed allies.

Liberals were much more eager to name antisemitism’s perpetrators when they emerged from the Trumpian right or from the white supremacists that attached themselves to his agenda. Similarly, conservatives only see antisemitism when it it comes out of the campus or anti-Israel left — to the delight of Jew-haters everywhere. Yes, antisemitism is “the latest manifestation of a centuries-long phenomenon of hatred and violence against Jews,” as JTS put it. But the “longest hatred” is also the most plastic hatred – pliable, artificial and occasionally lethal. No one should fall for the haters’ false rationales – or supposed other virtues. We need zero tolerance for all Jew-hatred and all bigotry.

Offering clarity, the Anti-Defamation League declared: “Since the start of the May conflict between Israel and Hamas, there have been numerous antisemitic incidents around the world related to the conflict. The perpetrators of these attacks deliberately targeted Jewish institutions in order to express their anger towards Israel. Whenever anti-Israel actions target” Jewish institutions “or individual Jews – in other words, holding Jews collectively responsible Israel’s actions – ADL considers such incidents as antisemitic.”

The ADL activists – non-academics — offered context and causation: These attacks didn’t pop up spontaneously. ADL connected the dots, noting that these thugs target Jews to bash the Jewish state. And they taught something others overlooked: that beating on Jews because you object to Israeli policy or Israel is antisemitic.

Still, the ADL’s description turned too cautious by not directly confronting the false, facile analogies comparing America’s complex racial dynamics with Israelis’ complex national dynamics with regard to Palestinians, Israeli Arabs and Bedouins.

Our Canadian cousins got it right. On June 3, the Centre for Israel and Jewish Affairs defined “antisemitism, especially in its modern guise of anti-Zionism,” as anti-Jewish violence compounded by “some of our society’s most esteemed institutions – universities, school boards, political parties, unions, the media – ignoring Jew-hatred, and in so doing providing cover for it.”

Fortunately, Rabbi Stuart Weinblatt and others formed the Zionist Rabbinic Coalition to represent most American Jews: proudly pro-Israel and pro-peoplehood. Still, when I grew up, Zionist rabbis didn’t need the adjective – we just called them rabbis.

Comfortable in their Jewish skins, these rabbis, like most Israelis, are ready to confront the antisemites. Only with such confidence – and true allies ready to diagnose the problem clearly and fight the problem systematically – will we be able to contain this growing, and all too often perfumed, Jew-hatred.

Gil Troy
is a Distinguished Scholar of North American History at McGill University, and the author of nine books on American History and three books on Zionism, including "Never Alone: Prison, Politics and My People," co-authored with Natan Sharansky.
The views and opinions expressed in this article are those of the author and do not necessarily reflect the views of JTA or its parent company, 70 Faces Media.