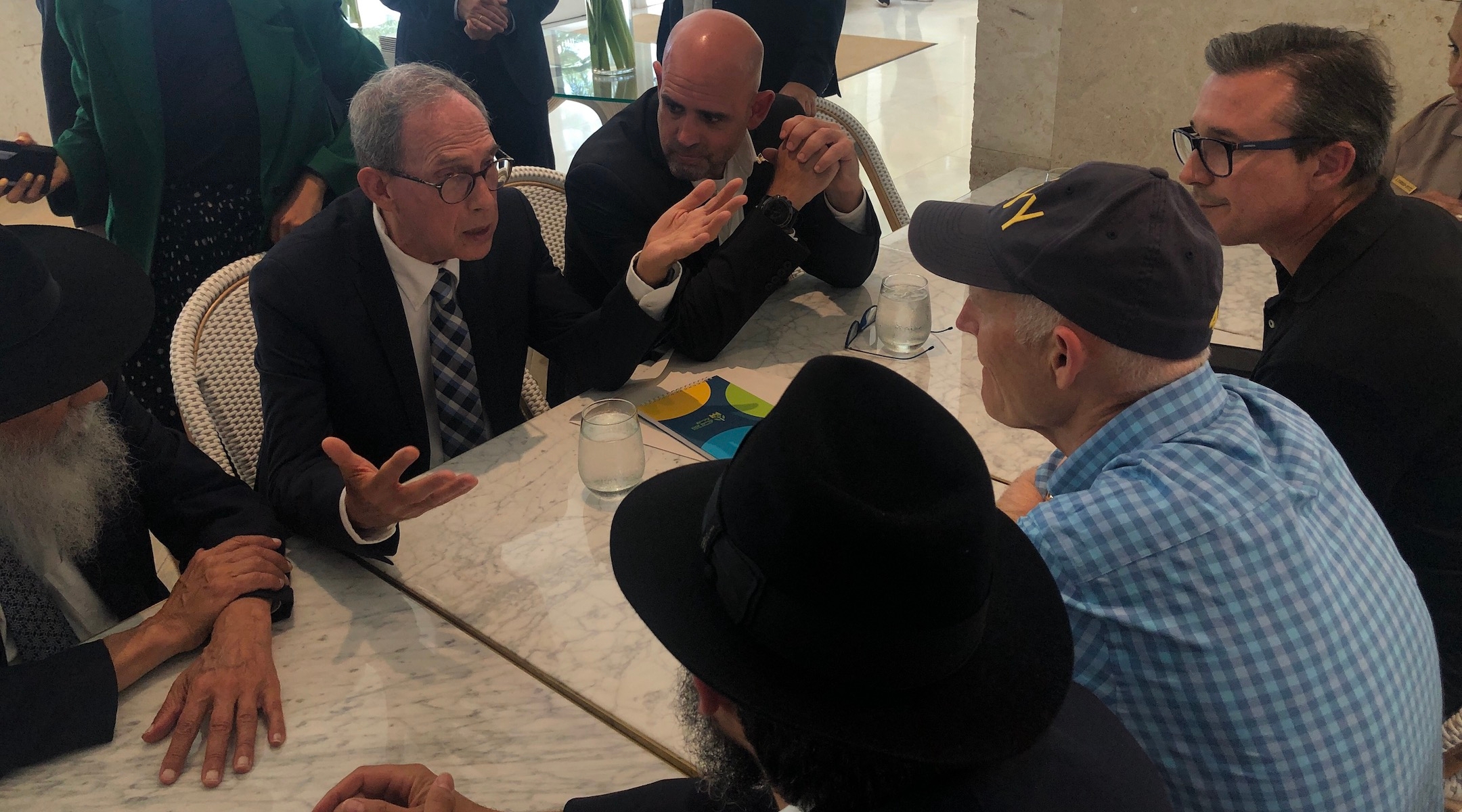 SURFSIDE, Fla. (JTA) — Nachman Shai’s first visit to the United States as Israel’s new minister for Diaspora affairs was not under normal circumstances.

“In hard times, in times of disaster, we have to stand shoulder to shoulder with Americans,” he said in an interview on Sunday in The Shul, the Chabad-Lubavitch synagogue located about a mile from the remains of the collapsed Champlain Towers building here that has left over 150 people unaccounted for.

Shai, 74, was previously best known as the calm, cool and collected Israel Defense Forces spokesman during the 1991 Gulf War who worked to comfort anxious and grieving Israeli families. So it made sense that he immediately began looking for local Jewish families to speak with upon landing on Sunday.

“This is an American tragedy,” Shai said. “And then when we have Florida, and then we have the Jewish community, so in all circles, we felt that there’s a commitment to come and help to come and express our solidarity and sympathy, and to do as much as possible to alleviate a little bit of the pain and sorrow that your Americans encounter.”

Shai’s other mission is to repair fraught relations between Israel and the U.S. Diaspora. For many American Jews, those ties were worn thin by the government of former Prime Minister Benjamin Netanyahu.

“The rift between the Jews of the Diaspora and the State of Israel is a grave national crisis,” Shai said June 12 on Twitter in his first comment in the job. “I will concern myself with acting through national responsibility to reconnect the Diaspora with Israel.”

Netanyahu strained relations with the majority liberal American Jewish Diaspora by breaking promises to elevate the status of non-Orthodox denominations, by his closeness with President Donald Trump and by angering the Democratic Party through a series of partisan moves.

Shai, who for years directed the Israeli arm of the Jewish Federations of North America organization (then called United Jewish Communities), is knowledgeable about American Jews, said Jacob Solomon, the president of the Greater Miami Jewish Federation. Before working as the IDF spokesperson and for the UJC, he was the press secretary for Israel’s United Nations delegation in New York.

He joined Israeli politics as part of the center-left Kadima Party in 2009, and was elected to parliament this year as a member of the Labor Party. The party’s leader, Merav Michaeli, named Shai to the post.

“Minister Shai is a good friend of the community and is a good fit in this role,” Solomon said in an interview.

Floridians, particularly the Jewish community, enthusiastically welcomed Shai and his contingent, which included a group of Israeli rescuers.

“The delegation has 10 experts who can help the American rescue teams,” Shai said. “We have some experience, unfortunately, from past situations like that.”

Israel’s homefront rescuers, trained in search and rescue to attend to the aftermath of terrorist attacks, over recent decades has become a first call for countries suffering disasters.

“Jews around the world look at Israel as a source of support, and sometimes even as a source to come and save them,” Shai said.

“But it’s not only about Jews,” he added of the Surfside tragedy. “I have to make sure that that’s fully understood. It’s about human beings, or it’s about a national tragedy.”