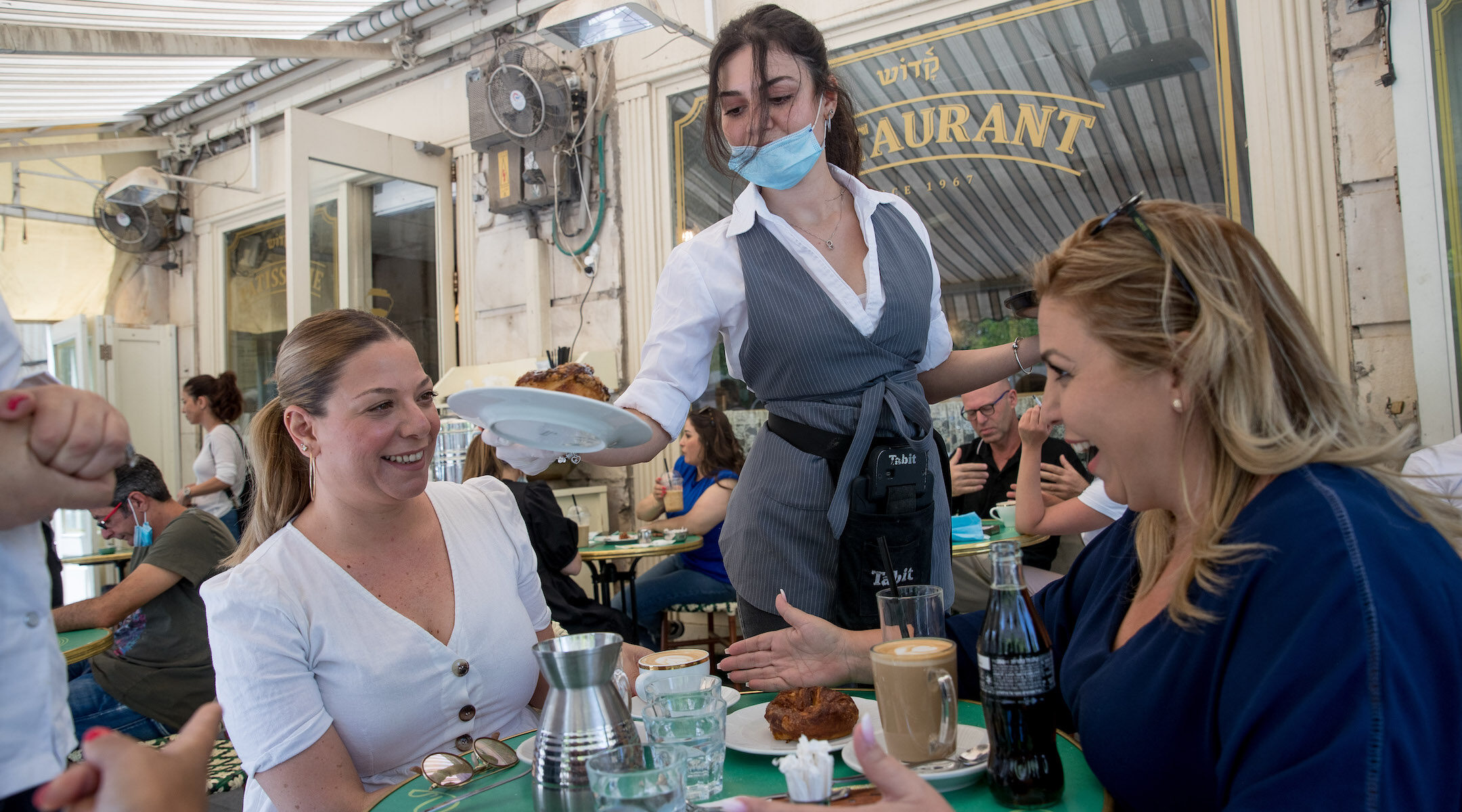 Customers sitting at Cafe Kadosh in Jerusalem, May 2020. The restaurant is one of hundreds in Israel that has opted for kosher certification outside the auspices of Israel's Chief Rabbinate. (Yonatan Sindel/Flash90)
Advertisement

JERUSALEM (JTA) — The Eucalyptus, a restaurant just outside the Old City here, draws in diners by offering “authentic biblical cuisine” — made from ingredients and dishes found in the Bible.

The chef, Moshe Basson, has an unusual way of sourcing his food, foraging for some of the biblical-era herbs in forests and fields around Jerusalem. So when he decided to certify the restaurant as kosher in 1997, he made special arrangements with Israel’s Chief Rabbinate that would allow him to keep finding the herbs for himself rather than buying them from a certified merchant.

“I use all of the ‘Sheva Minim,’ the seven species mentioned in the Bible, as well as all kinds of wild herbs,” Basson told the Jewish Telegraphic Agency. “I had a written agreement with the Rabbinate that I could continue to do that, as long as I checked them for bugs the way they instructed me to.”

But other chefs began to complain that they were not allowed to use products that Basson was allowed to use. Eventually, three years ago, the Chief Rabbinate suspended his kashrut certificate, and Basson began to look for other options.

He landed on Tzohar, a group of relatively liberal Orthodox rabbis who offer an alternative kosher certification service. When Basson asked older Orthodox diners if they would accept Tzohar’s certification, he said, “half said yes and half said no.” The response from younger patrons was more enthusiastic.

“I went to each table that had someone wearing a kippah and asked them if they would accept the Tzohar kashrut,” he said. “And almost all of them between the ages of 20 and 50 said yes.”

The Eucalyptus is one of more than 200 Israeli restaurants that has eschewed the Chief Rabbinate’s kosher certification in favor of Tzohar’s. It’s the latest sign that Jewish Israelis, who had been divided into the two broad camps of “religious” and “secular,” are now seeking a greater range of ways to practice their religion — many of them outside the Chief Rabbinate’s control.

Now that increased diversity in kosher certification is getting government backing. On Wednesday, Religious Affairs Minister Matan Kahana announced a plan to reform Israel’s kosher certification system, effectively turning the Chief Rabbinate into a regulatory agency for private kosher certifiers like Tzohar — a role it hasn’t played before.

The Chief Rabbinate will continue to provide its own kosher supervision to restaurants that want it. But private agencies like Tzohar would also get government recognition, and in those cases the Chief Rabbinate’s role would be shifted to ensuring that the agencies are complying with a set of universal and transparent standards. The goal is to give restaurants a broader range of kosher certification options while allowing those who want to avoid direct contact with the Rabbinate that opportunity.

Israel’s parliament, the Knesset, must approve the plan.

“The kosher revolution will introduce competition to kosher certification for the first time ever,” Kahana said in a statement. “It’s a move that will improve kosher certification, streamline services, reduce prices and make the process easier for restauranteurs, hoteliers and the entire food industry.”

The Chief Rabbinate has pushed back against attempts to reform the certification system and has succeeded in making life difficult for its competitors. According to current Israeli law, Tzohar’s certificates cannot use the word “kosher” or its derivatives, which are exclusive to the Chief Rabbinate. Instead, a typical certificate will say “All raw materials were checked and approved by the Tzohar rabbinic organization.”

“I come from England and I appreciate the tremendous superiority of the Israeli Rabbinate kashrut over any organization that gives kashrut throughout the world,” he said. “Obviously the fact that it’s legalized and it’s part of the government is a big advantage.”

Weisz said there are dozens of private certifiers, including Tzohar, that profess to offer kashrut supervision but cannot be trusted.

“I wonder how many people have examined the so-called kashrut of these different organizations that claim to give certification,” he said. “Nobody knows who they are or what they are. You wouldn’t think of this in any other situation, but when it comes to religion everyone seems to think they can control it.” 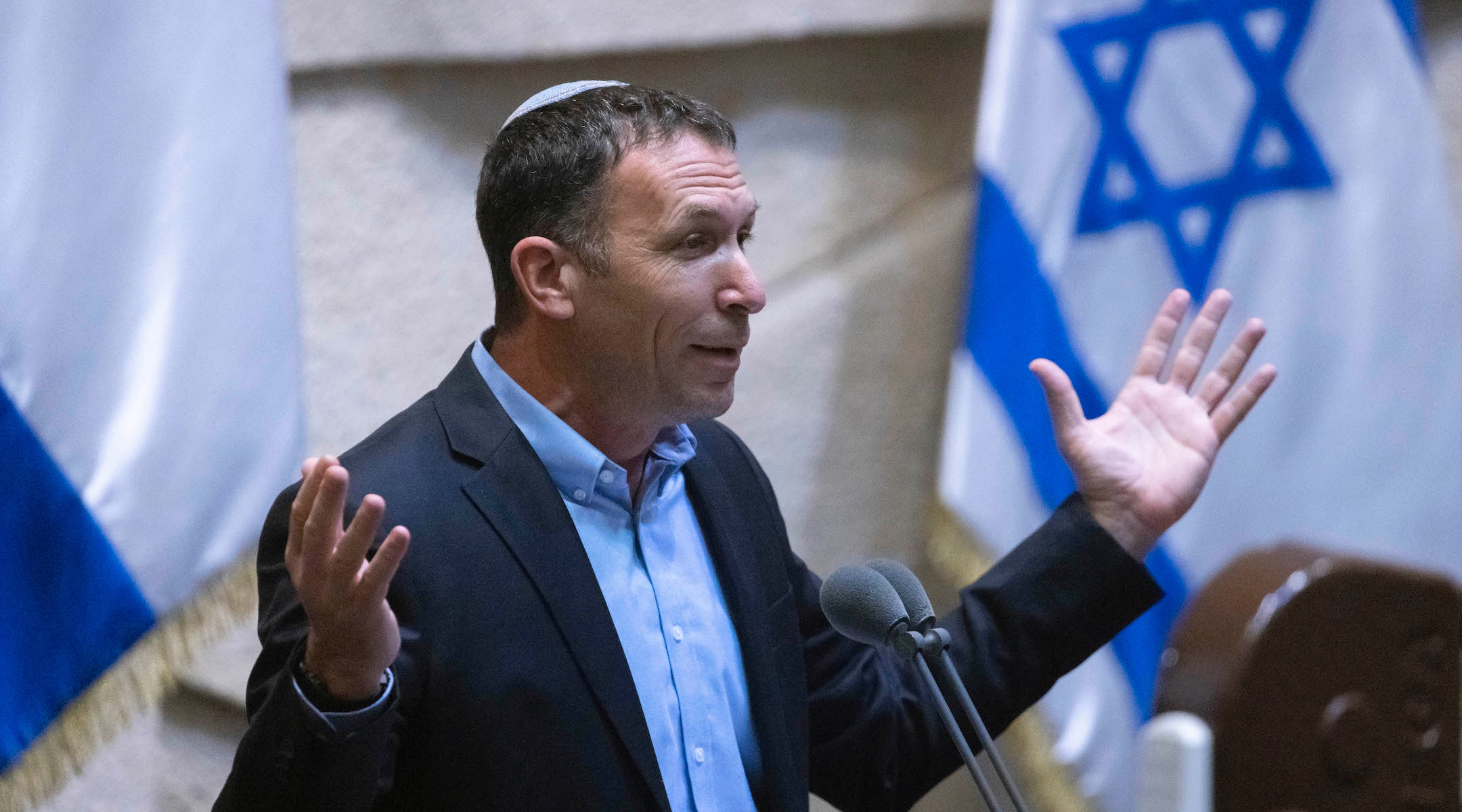 Despite decades of protest from secular Israelis and repeated government attempts to sap its power, the Chief Rabbinate retains broad control over Israeli religious life. In addition to dominating kosher certification, the body has a monopoly on officially recognized marriage, divorce and burial for Israeli Jews.

Tzohar, which claims more than 1,000 rabbis and educators as members, has been a pioneer in offering an alternative to Orthodox Israelis turned off by the Chief Rabbinate’s ,strict policies or tortuous bureaucracy. It was founded in 1995 after a Jewish extremist assassinated Prime Minister Yitzhak Rabin, and aims to overcome the schisms in Jewish society while offering a more accessible approach to Judaism.

The organization also officiates weddings, and because its rabbis have Orthodox ordination, those unions are recognized after the fact by the Chief Rabbinate. By contrast, weddings officiated by non-Orthodox rabbis, or by rabbis whose ordination is not recognized by the Chief Rabbinate, do not receive government recognition and technically are illegal, though many Israelis opt for them anyway.

Tzohar offers free prayer services on Jewish holidays like Yom Kippur, when spots at synagogue can be scarce, and its kosher operation has grown despite the Chief Rabbinate’s opposition.

“Kashrut Tzohar has become a legitimate choice, and the fact is that we are growing every week,’ said Rabbi Oren Duvdevani, who is responsible for food supervision at Tzohar. “Just today two new contracts were signed. If restaurants ask us about it, we say ‘ask your customers.'”

The organization employs 40 kashrut supervisors throughout the country — one-third are women — and five senior kashrut inspectors, including two women. None of the Chief Rabbinate’s supervisors are women.

Whereas the Chief Rabbinate’s supervisors come to restaurants only to check that all the rules are being followed, Tzohar supervisors work in the kitchen. They check the vegetables or the rice for bugs that would make the food non-kosher, and often pitch in cutting vegetables or even cooking.

“We don’t know how long it will take, but we do have expectations that they will make some changes in the law,” Duvdevani told JTA in an interview before the plan to reform certification was announced. “But we also know that politicians sometimes have their own limitations on what they can do.”

The kosher certification plan may be just the first of several religious reforms pursued by the current government, the first in six years not to include a haredi Orthodox party. The coalition’s largest party, Yesh Atid, has long advocated for the liberalization of religious regulations, which polls indicate most Israelis would support.

According to surveys conducted by Hiddush, an organization that advocates for religious pluralism, solid majorities of Jewish Israelis want Israel to offer civil marriage and accept a wider range of Jewish conversions. In a 2020 survey, Hiddush found that only 11% of Jewish Israelis trust the Chief Rabbinate as an institution.

Restaurant owners who are chafing at the Chief Rabbinate’s demands appear to be taking action. Take the case of Cafe Kadosh, a Jerusalem bakery and restaurant founded in 1967.

Earlier this year, the Chief Rabbinate told the cafe that it would have to put stickers on its products saying they were dairy and make its croissants into triangles. The latter mandate was part of the Chief Rabbinate’s attempt to institute a nationwide standard in which dairy pastries would be shaped as triangles to make them more identifiable.

“The Rabbinate really started to bug us,” owner Itzik Kadosh told JTA. “Everyone knows all of our croissants are dairy. There is no way I was going to change the shape or put a sticker on it. I go to eat shawarma and there is no sticker saying that it is meat.”

After Kadosh protested publicly, the Chief Rabbinate took away the restaurant’s certification and launched a smear campaign on Facebook saying it was open on Shabbat, which wasn’t true.

That’s when Kadosh decided to contact Tzohar. He said Tzohar’s female supervisor checked more than 300 of his products to ensure they were kosher. Tzohar kashrut costs 200 shekels more per month than the Chief Rabbinate, Kadosh said, but the supervisor works three hours a day checking the flour and cleaning the vegetables. In addition, because the supervisor is an employee of Tzohar, not the restaurant, he doesn’t have to pay her benefits.

Kadosh said his business has not suffered and that even haredi, or ultra-Orthodox Jews, continue to patronize his restaurant.

“The Rabbinate behaved like the Mafia,” he said. “Maybe people used to be afraid of them, but I refused to be blackmailed. I said to them, “OK, take my certification. Tomorrow I’ll just go to Tzohar.”