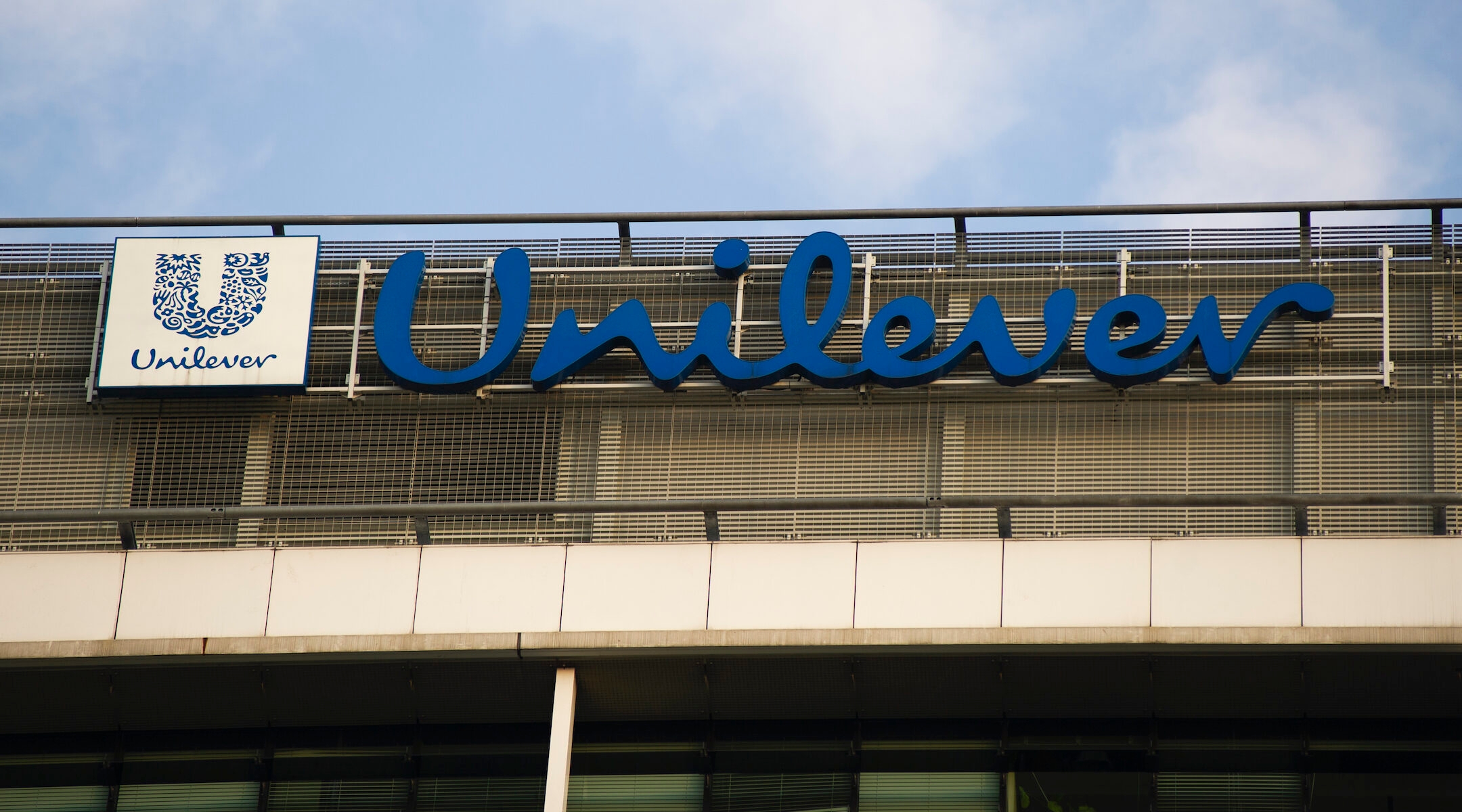 The Unilever logo is seen in Warsaw, Poland, in 2020. (Aleksander Kalka/NurPhoto via Getty Images)
Advertisement

(JTA) — One week after Ben & Jerry’s announced that it would stop selling ice cream in the “Occupied Palestinian Territory,” the company’s board chair for the first time publicly rejected the suggestion that the move was antisemitic.

And the brand’s parent company, Unilever, disavowed the movement to boycott Israel. The disavowal comes as Unilever faces the prospect of being penalized financially in states that have anti-boycott laws.

Those are two of the developments to emerge in the continuing fallout from the Ben & Jerry’s boycott of Israeli settlements. Here’s a rundown of what has happened over the past day or two:

On Tuesday, Anuradha Mittal, the chair of Ben & Jerry’s board of directors, tweeted her first comments on the boycott since it was announced last week. She stood by the decision and denied being antisemitic following Israeli Foreign Minister Yair Lapid’s statement that the boycott is a “shameful surrender to antisemitism.”

“I am proud of @benandjerrys for taking a stance to end sale of its ice cream in the Occupied Palestinian Territory,” she tweeted, using the same term for the West Bank that the announcement used. “This action is not anti-Semitic. I am not anti-Semitic. The vile hate that has been thrown at me does [not] intimidate me. Pls work for peace – not hatred!” (Mittal did not detail the “vile hate” she has received, though critics of the decision have attacked her on social media.)

Mittal’s post came days after a report by NBC News that her board was unhappy with the text of the statement put out by Unilever announcing the boycott. Ben & Jerry’s would “stay in Israel through a different arrangement,” it said. That clause did not appear in the announcement drafted by the board.

Mittal has not said that Ben & Jerry’s should withdraw from Israel entirely, and the board hasn’t voiced that position publicly. But on Twitter, Mittal has previously endorsed the Boycott, Divestment and Sanctions movement against Israel known as BDS.

On Tuesday, she also tweeted a statement of support from liberal Jewish groups and quoted a passage from the Unilever statement emphasizing “a clear distinction between the State of Israel & the Palestinian territories it militarily occupies.”

Unilever is also stressing that the settlement boycott is not the same as BDS. The company’s statement, made in nearly identical letters sent to Jewish organizations on Tuesday, comes as a handful of states are considering divesting funds from Unilever under laws that ban the states from doing business with companies that boycott Israel.

The letters say that Unilever is committed to doing business with Israel, where it employs 2,000 people and has invested nearly $296 million in the country’s market.

“We look forward to investing in our business in Israel long into the future,” say the letters, which were sent to the Anti-Defamation League and the Conference of Presidents of Major American Jewish Organizations, both of which had criticized Ben & Jerry’s West Bank pullout. “We have never expressed any support for the Boycott Divestment Sanctions (BDS) movement and have no intention of changing that position.”

Both the ADL and Presidents Conference said they appreciated the letter but reiterated their previous criticism. The latter said Unilever’s “response does not go nearly far enough” and encouraged the company to try to override the Ben & Jerry’s board decision, though an internal agreement between Unilever and the Ben & Jerry’s board appears to make that impossible. The umbrella group also praised the states that are looking into whether the boycott violates anti-BDS laws.

The Presidents Conference said it opposed the Ben & Jerry’s decision, “as boycotts of Israel are discriminatory.” While the announcement and letter make clear that the boycott applies only to the West Bank, which Israel controls but has not annexed, Presidents Conference CEO William Daroff told JTA that the boycott would force the closure of Ben & Jerry’s plant in Israel, and that the group feels an “obligation to speak out when Jewish owned businesses are singled out.” Daroff added, “Ben & Jerry’s made a political decision that singles out Israelis and one ‘disputed’ territory.”

The ADL also thanked Unilever for its statement against BDS but said, “While ADL is a strong supporter of the two-state solution, we believe that it is wrong for any company to single out Israel by refusing to sell its products to Israelis and Palestinians living in the West Bank.”

A Jewish owner of a Ben & Jerry’s franchise on Manhattan’s Upper West Side has joined a group of local store owners protesting the West Bank boycott. On Monday, Joel Gasman posted on Facebook that “we feel the recent actions by [Ben & Jerry’s] corporate office do not reflect our personal views.”

Gasman, whose store is in a heavily Jewish neighborhood, promised to donate 10% of its profits to “State of Israel educational causes.” He did not specify which ones.

“We’re saddened by the impact that this has had on our business and the Jewish community,” he wrote. “We are proud Jews, Americans, and active supporters of the New York Jewish community and State of Israel.”

Gasman told JTA in an email: “We have lost catering jobs for corporate offices, schools, and synagogues over the past week due to Ben and Jerry’s statement.”

Multiple supermarket owners in New York City have pledged to limit or stop the sale of Ben & Jerry’s in the wake of the announcement. The organization that certifies Ben & Jerry’s as kosher, Kof-K, also said in a statement that it is in communication with Israel and an umbrella group for the settlements “to determine the most effective way to respond,” but will not be removing its certification from the ice cream — a move that some Israel advocates have sought — according to Yeshiva World News, an Orthodox publication.

Israel’s leaders, as well as the leaders of legacy American Jewish organizations, have come out fiercely against the boycott. On Tuesday, Axios reported that Israel has set up a task force to counter the Ben & Jerry’s boycott and encouraged its diplomats to start a pressure campaign against the decision by fomenting protests in front of Ben & Jerry’s and Unilever offices.

At the same time, a growing chorus of progressive Jews in Israel and America is praising the boycott.

On Tuesday, a coalition of Israeli progressives took out a full-page ad in Haaretz, a left-leaning newspaper, to thank Ben Cohen and Jerry Greenfield, the Jewish founders of the eponymous ice cream company. The pair have not been involved in the company’s operations since 2000 and have not commented on the West Bank decision.

“We are writing to let you know that in Israel there are also other opinions,” the ad says. “Thank you for your commitment to Palestinian human rights.”

The ad comes on the heels of a letter signed by seven left-wing American Jewish groups, including J Street, the New Israel Fund and the liberal rabbinic organization T’ruah urging governors not to penalize Ben & Jerry’s or Unilever for the settlement boycott.

“Using the full force and power of government to penalize those who exercise their rights in opposition to Israeli policy does nothing but generate further attention and sympathy for boycotts, and frames backing Israel as being in opposition to fundamental freedoms in the minds of many Americans,” the letter says. “That is a strategic disaster for those, like us, who are trying to maintain and grow a healthy US-Israel relationship.”