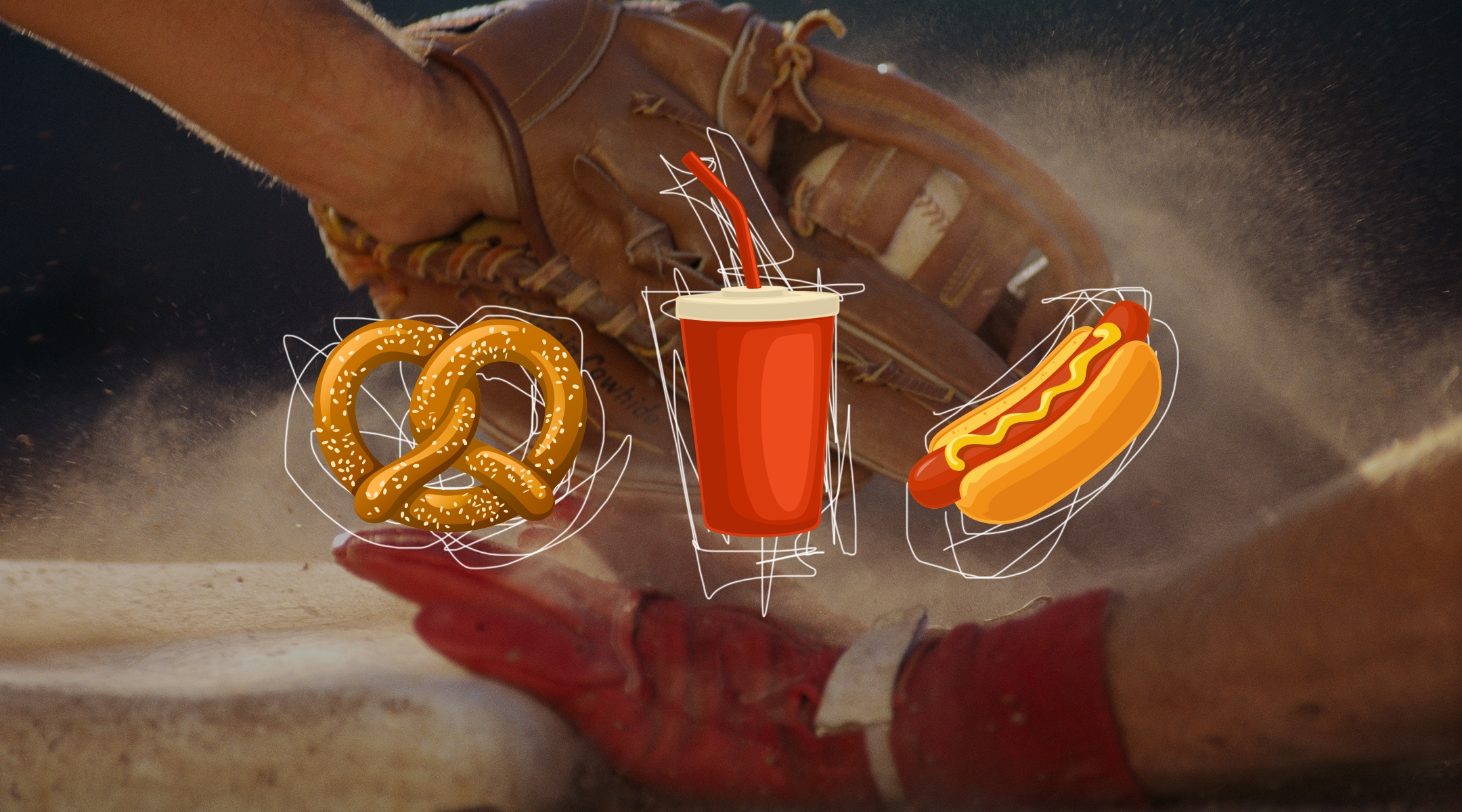 (JTA) — Jews love baseball — there’s no denying it. But when the baseball season opened in April, most major league stadiums were operating at restricted capacities and offered a limited number of concession stands.

Not anymore. As the U.S. COVID-19 vaccination rate has soared, many of the ballpark restrictions have been lifted, and remain so even in the face of the Delta variant case surge.

For those returning to the stands across the country (and Canada) who keep kosher, we have prepared this guide to eating in every stadium, from Seattle to Miami. There’s no favoritism — it’s aligned in alphabetical order.

Note that it also includes vegan options, which are plant-based and therefore considered by some to be acceptable in their kosher diets.

(Another thing to keep in mind: It appears to be policy now at most ballparks, if not all, that credit cards are required to buy food — though there are special ATM machines at parks that can convert your cash into prepaid debit cards.)

There are no kosher items here, but vegan food available includes a Beyond Burger and a smoked tofu sandwich. Like some other teams that have held a Jewish Heritage Night, the Braves have featured a special “kosher night” in past seasons. Unfortunately that does not appear to be on the docket this year with COVID wreaking havoc on scheduling.

No kosher items are available. There are vegan hot dogs, vegan chicken wraps and vegan burgers.

Though Camden Yards is nearly 30 years old, it’s still a tourist attraction and a great place to watch a game. Like many of the remaining older parks, there isn’t a bad seat in the house. From day one in 1992, the stadium has had a kosher food stand, apparently the first certified kosher stand in any of the major league stadiums. Now called Kosher Grille, fans can find it beyond the left field seats.

The oldest ballpark in the American League has the most unique kosher serving device: a vending machine with kosher hot dogs since 2008.

In the National League’s oldest ballpark, the Cubs have a kosher cart behind Section 227. They also sell veggie burgers in several locations and veggie dogs behind Section 117.

No kosher items are listed, but vegan and vegetarian items include sandwiches, veggie burgers and an Asian appetizer duo from Impossible Foods, the brand behind the Impossible Burger.

No kosher items are listed, but they do sell veggie dogs (and regular Nathan’s hot dogs, which sadly are no longer kosher).

The park’s kosher hot dog stand is a thing of the past and there are no kosher items listed in the stadium’s offerings. However, vegan options include tacos, burritos, dogs and a garden salad.

No kosher foods are listed, though the Sandlot Brewery inside the ballpark says its beer is kosher certified. The vegan foods available include a veggie dog and salads. The park also offers vegetarian quesadillas.

No kosher items here, but fans can pay homage to former Tiger slugger and Jewish sports legend Hank Greenberg — his statue is one of six on the concourse in left center field. Greenberg’s 58 homers and 146 RBIs in 1938 is tops for a season among Jewish ballplayers. Vegan choices such as Beyond Burgers can be found in the Big Cat food court.

The park doesn’t have any specifically kosher foods, but the Astros offer several vegan food options, such as the Beyond Burger, at stands behind Sections 109, 125 and 208. It also has salads, fruit, hummus and other items at the 19th Hole concessions stand in center field.

The Royals boast a stadium cart by Kohn’s Kosher, a Jewish deli from nearby St. Louis (the deli menu is similar to the Kohn’s Kosher cart at the St. Louis Cardinals’ Busch Stadium). Vegan options include burgers, Beyond Burgers and Beyond Brats.

The Jewish sausage factory Jeff’s Gourmet had provided the park with kosher food, but not this season. “Due to health and safety restrictions, we are unable to offer Jeff’s Gourmet until further notice,” the vendor said. Note that health and safety restrictions could be removed or eased at some point this summer, so check before your visit on the team’s website: mlb.com/dodgers/ballpark/information/guide. Dodger Stadium does have a variety of vegan options as well, including Beyond Burgers, Beyond Sausages, tempeh tacos and tempeh nachos with vegan cheese.

Kosher hot dogs and hamburgers can be found behind Section 3 — except on Shabbat, of course, as the team website makes clear.

The kingdom of the ballpark sausage does not offer a kosher option of the famed Milwaukee bratwurst or other proteins. Non-meat options include soft pretzels, popcorn and fries, but otherwise it’s slim pickings.

While there are no kosher items offered, the stadium does offer a vegan burger and veggie burritos and tacos.

The Mets offer several kosher products, including hot dogs, knishes and pretzels, which can be purchased near Sections 115 and 130 on the Field Level, as well as Section 408 on the Promenade Level. There are also vegan options at the many restaurants and concession stands scattered throughout the park.

Strictly Kosher, which features items such as hot dogs and knishes, is in four locations — behind Sections 110, 214A , 229 and 321. The Yanks also offer plenty of vegan items, such as field roast hot dogs and burgers, black bean burgers, Beyond Sausages and vegan sushi. There is more than enough kosher and vegan food to satisfy “long suffering” Yankee fans, who haven’t won a World Series since 2009.

No kosher foods are listed. Nor are there any vegan items listed among the foods available for mobile orders. But Aramark, which is in charge of the stadium’s food operations, does offer veggie dogs and veggie burgers at the other ballparks they cater. So there’s always next year.

Concessions manager Bruce Leith told the Jewish Telegraphic Agency: “Unfortunately, we have not offered kosher items except on Jewish Heritage Night due to several reasons, including preparation concerns and other factors.” But he added that permanent kosher food offerings have been under discussion and will be something the Phillies hope to offer in the future.

Jewish Heritage Night has not been scheduled yet this summer — like most teams, the immediate concern was being up and operational by Opening Day.

Citizens Bank Park also offers a variety of vegan options, including dogs and burgers. Before the pandemic, the Phils also had a stand that sold famed musician and Philadelphia native Questlove’s vegan Beyond Meat cheesesteak. It won’t be back this season — they’ve had to pause agreements with several vendors because of COVID-19 restrictions — but it could return in 2022.

The Pirates do not offer kosher food, but like their counterparts at the other end of the state (the Phillies), they have had Jewish Heritage Nights in the past, where they bring in kosher food, and may well have one at some point this summer (even though nothing is currently scheduled). Vegan items include a burger and a greens and grain salad.

While they have no kosher items, no less than a dozen of their concession stands are listed as vegetarian friendly.

Although there are no official kosher selections, they do sell Hebrew National hot dogs — which many Jews consider kosher, despite a longstanding dispute over its certification. And there are plenty of vegan food options, including at the Garden (in an actual garden) behind center field and the John J. McGraw Derby Grill, which sells Impossible Burgers. A veggie cheesesteak can be found at Outta Here Cheesesteaks.

No kosher food listed here. There is a concession stand, The Natural, with vegan and organic foods including Beyond Burgers, vegan sausages and other plant-based food.

The aforementioned Kohn’s Kosher has a presence here as well, behind Section 147. Among their items: pastrami and corned beef sandwiches, knockwurst and hot dogs. Kohn’s has operated inside the new Busch Stadium since it was built in 2013, which happened to be the last time the Cardinals were in the World Series (they lost to the Red Sox, but the Cards do hold the National League record for most world titles at 11).

The Rays do not list any kosher food but they do have several vegan food items, including Beyond Burgers, and vegetarian rice bowls with vegan sauces.

The good news is they sell Hebrew National hot dogs. The bad news is the kosher Centerfield Market stand from the Rangers’ last stadium didn’t make it into the new ballpark — the team technically moved into its new home last year, but this is the park’s first year with fans. It does have a vegan cart with plenty of options, though.

The Jays returned to their home base on July 30, after playing their games for more than a year in Buffalo due to the COVID-induced Canadian border closure. The Rogers Centre offers kosher hot dogs, sausages and french fries at the Olde Spadina in section 131.