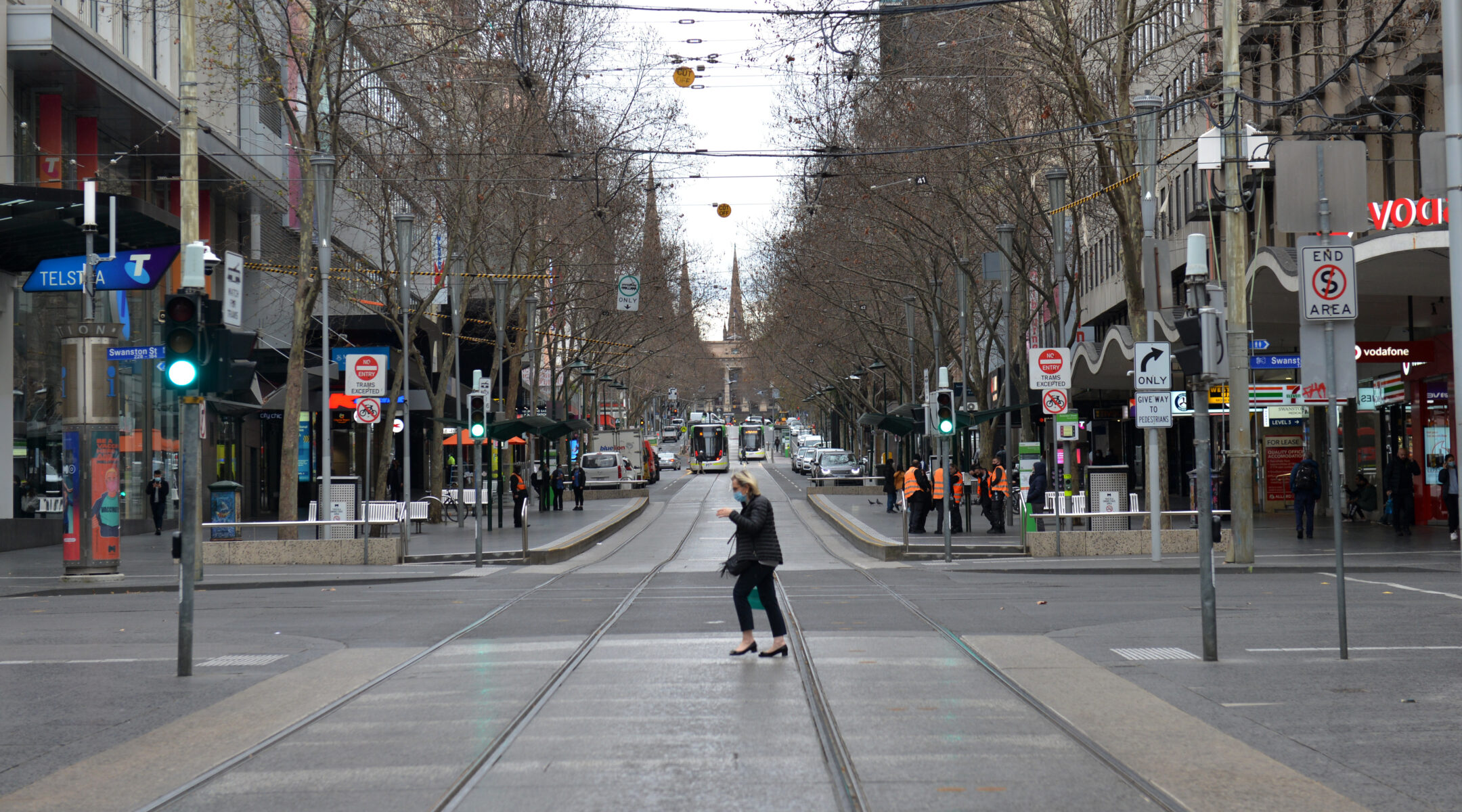 A view of an empty street in Melbourne, Australia on Aug. 11, 2021, after the city extended its latest COVID-19 lockdown. (Recep Sakar/Anadolu Agency via Getty Images)
Advertisement

(JTA) — Video from a packed engagement party is roiling the Jewish community of Melbourne, Australia, amid a growing outbreak of COVID-19 that has extended yet another stringent lockdown there.

Compliance with local rules has been spotty across Melbourne during the latest lockdown, which comes after a year and a half of intense restrictions meant to stop the spread of the coronavirus there.

But the local Jewish community is again emerging as a hotspot. Local authorities are planning to set up vaccination and testing sites in the heavily Orthodox suburb of St. Kilda East after a mother and son there tested positive, and sites in other Orthodox areas, including Caulfield and Balaclava, have landed on the growing list of locations with known exposures. In Melbourne, 25 people tested positive for COVID-19 on Saturday.

Meanwhile, the engagement party video has offered what many say is hard proof that some Orthodox Jews are not taking the pandemic seriously. The video, which is circulating online, shows a groom speaking to a crowded room of unmasked guests, at one point joking, “Clearly this is legal, because this is a group therapy session.” Laughter follows.

“Many people will have seen a video from the engagement party circulating. I have,” Philip Dalidakis, a Jewish former lawmaker who works for the Australia Post, wrote on Facebook Sunday. “There are people in it that I know & I am speechless. I am genuinely shocked at the brazen disregard for our laws.”

According to Rafael Epstein, a journalist with the Australian Broadcasting Corporation, 68 people were present and contact tracing is underway after someone at the event tested positive for COVID-19.

“If you’re angry, believe me you are not as angry as almost all of the Jewish community,” Epstein tweeted.

Among those expressing anger was the Australia Jewish News, which called on local Orthodox leaders to condemn gatherings that violate the city’s lockdown rules and to penalize local rabbis who have condoned them.

On Sunday, the Rabbinical Council of Victoria issued a statement urging local Jews to “comply with all government restrictions without exception” — then it issued a stronger comment after criticism from the newspaper and others.

“For the removal of any possible doubt, this includes all illegal gatherings including for prayer,” said the unsigned clarification, which was posted to Facebook. “We implore anybody considering flouting the law to refrain from doing so. We unreservedly condemn such actions, which bring risk and shame to the entire community.”

But the group did not suggest that it would name or penalize rabbis who have participated in gatherings, which local Jews said had been happening for a variety of reasons throughout the pandemic.

Responding to an Australia Jewish News Facebook post, Rabbi James Kennard, principal of Mount Scopus Memorial College, a Modern Orthodox day school, wrote that such condemnation is needed and signaled that a wide array of gatherings had been taking place in contravention of local rules.

“It is painful to speak out against fellow-Jews in public. But at this time, the danger of staying silent is too great,” Kennard wrote. “Because the law states that we must stay at home, because the experts tell us that this is the way to save lives, because of the risk of terrible Chillul Hashem (desecration of God’s name), every rabbi and leader must cry out. We must take the heartbreaking path and stop the gatherings — for prayer, for s’machot, for school. Just stop.”

Speaking on Australian TV, Daniel Aghion, the president of the Jewish Community Council of Victoria, said, “We’ve heard about a number of non-compliances. That’s actually quite disturbing for us.”

Australia has experienced perhaps the world’s most stringent restrictions aimed at curbing the spread of COVID-19. Since the pandemic began, Australians and permanent residents have effectively been barred from leaving the country, while only a small number of people have been allowed to enter. Under the current lockdown in Victoria, Melbourne’s region, all gatherings in private homes are banned and the only kinds of gatherings that are allowed are funerals of 10 people or fewer.

Tension over compliance with COVID-19 rules has emerged around the world in and around Orthodox communities since March 2020, when rules aimed at stopping the spread of disease made minyans, or the quorums required to say some prayers, illegal in many places.

Dalidakis wrote that most local Jews were adhering to the rules. But, he said, “small pockets of our Orthodox & ultra Orthodox community need to see this event as an opportunity to reset & reflect on just how dangerous & selfish their behaviour has been.”