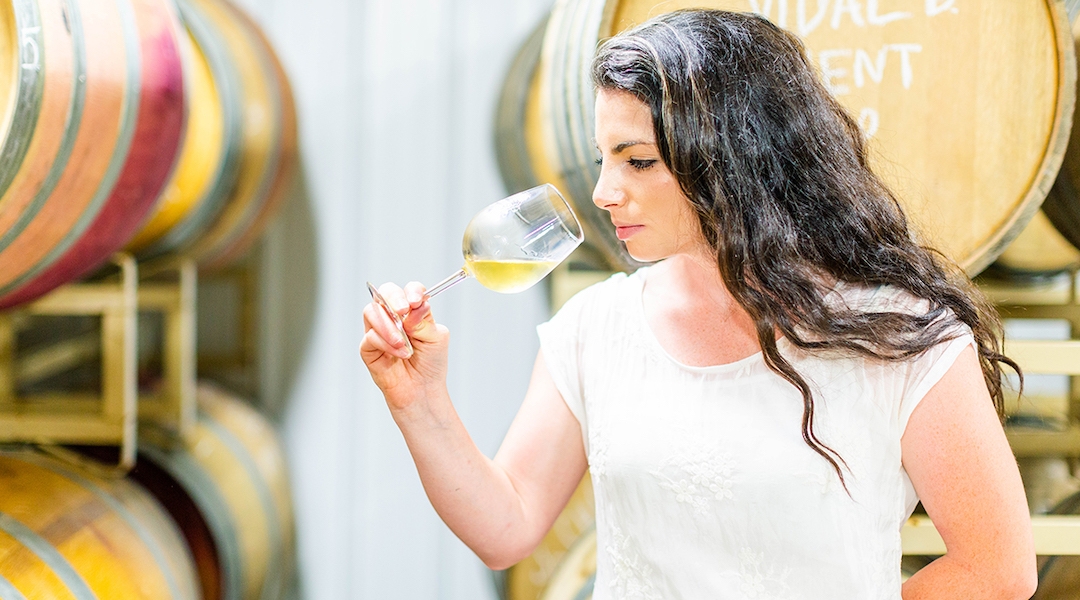 Rachel Lipman, at 28 perhaps the youngest winemaker in Maryland, is pushing through boundaries in a traditionally male-dominated industry. (Jonna Michelle Photography)
Advertisement

Rachel Lipman cares deeply about preserving her Jewish family’s fifth-generation winemaking business, Loew Vineyards, but the 28-year-old is keeping an eye on the future, too. As one of the youngest winemakers in Maryland — if not the youngest — she’s pushing through boundaries in a traditionally male-dominated industry.

But that’s not all. Lipman is also educating customers about her family’s extraordinary legacy of producing unique wines — a 150-year-old family tradition that was nearly eradicated by the Holocaust.

Among the 14 wines currently available on the Loew Vineyards website, four are not wines in a traditional sense. Rather they are meads, or honey wine. Meads are made with fermented honey and therefore are well-suited for the upcoming High Holidays. Among the available varieties include cyser (mead with apple juice) and pyment (mead with grape juice).

A fifth-generation winemaker, Lipman’s method of making mead is not unlike the way her ancestors did it in Europe.

“My grandfather always says you can’t argue with success,” she says, referring to the family’s proprietary mead recipe.

These days, Lipman uses modern machinery and loves scouring local farmers markets to discover new honey producers with whom she can collaborate.

According to a spate of recent articles, mead is having something of a moment. Lipman is naturally thrilled by the development, though believes there is a misconception that all meads are sweet. Her family’s mead comes in varieties that are dry, semi-dry and semi-sweet.

“There is a lot of experimentation going on with mead right now, similar to craft beers,” she says. “I even heard of a peanut butter banana mead.”

Central to the story of Loew Vineyards is Lipman’s grandfather, who grew up in Lvov, Poland (now the Ukrainian city of Lviv) prior to World War II. Before the Holocaust, Lvov was home to Poland’s third-largest Jewish population, behind Warsaw and Lodz. The city had a Jewish population of some 200,000 — about one-third of the total — but only some 800 survived the genocide. The region also boasted many wineries, meaderies and distilleries, with the majority owned by Jews.

Lipman has spent much time uncovering her family’s mead-making past. During the long months of COVID, she has sifted through Polish documents, periodicals and newspapers to learn more. She discovered that the family meadery was in a district that housed warehouses, vodka distilleries, several meaderies and, yes, even a beer garden. In fact, the family meadery took up the length of an entire city block.

The patriarch of the Loew family in the mid-1800s was Meilech Loew, who made mead and distributed it internationally. Meilech and his wife, Malka, had 10 sons, two of whom created their own meaderies, while the others ventured into wine distribution and marketing. One son, Eisig, established the first national meadery and beeswax facility in Poland. He and his wife, Clara, had three sons, one of whom was Wolfgang — Lipman’s grandfather, who Americanized his name to William (Bill) upon immigrating to the U.S.

During the Holocaust, the family’s winemaking business was decimated — as were nearly all the members of the Loew family. Bill survived serving as part of the Underground, where his multilingual skills were highly prized. He was imprisoned in a Budapest political prison and two concentration camps, and eventually was liberated during a Dachau death march on April 23, 1945, by the U.S. Army’s 99th Infantry Division. Each year, the family commemorates this special day with Bill, 95, who remains involved with the business.

“It’s kind of like a birthday celebration for us,” Lipman says.

Once he arrived in America, Bill attended night school, married Lois Hendrickson and eventually became an electrical engineer. Yet the sweet smell of the barrels from his family’s meadery always remained a part of him. Upon retiring in 1982, he purchased a 37-acre plot in Frederick County, Maryland, with the aim of planting grapes and continuing his family’s wine and mead-making legacy. 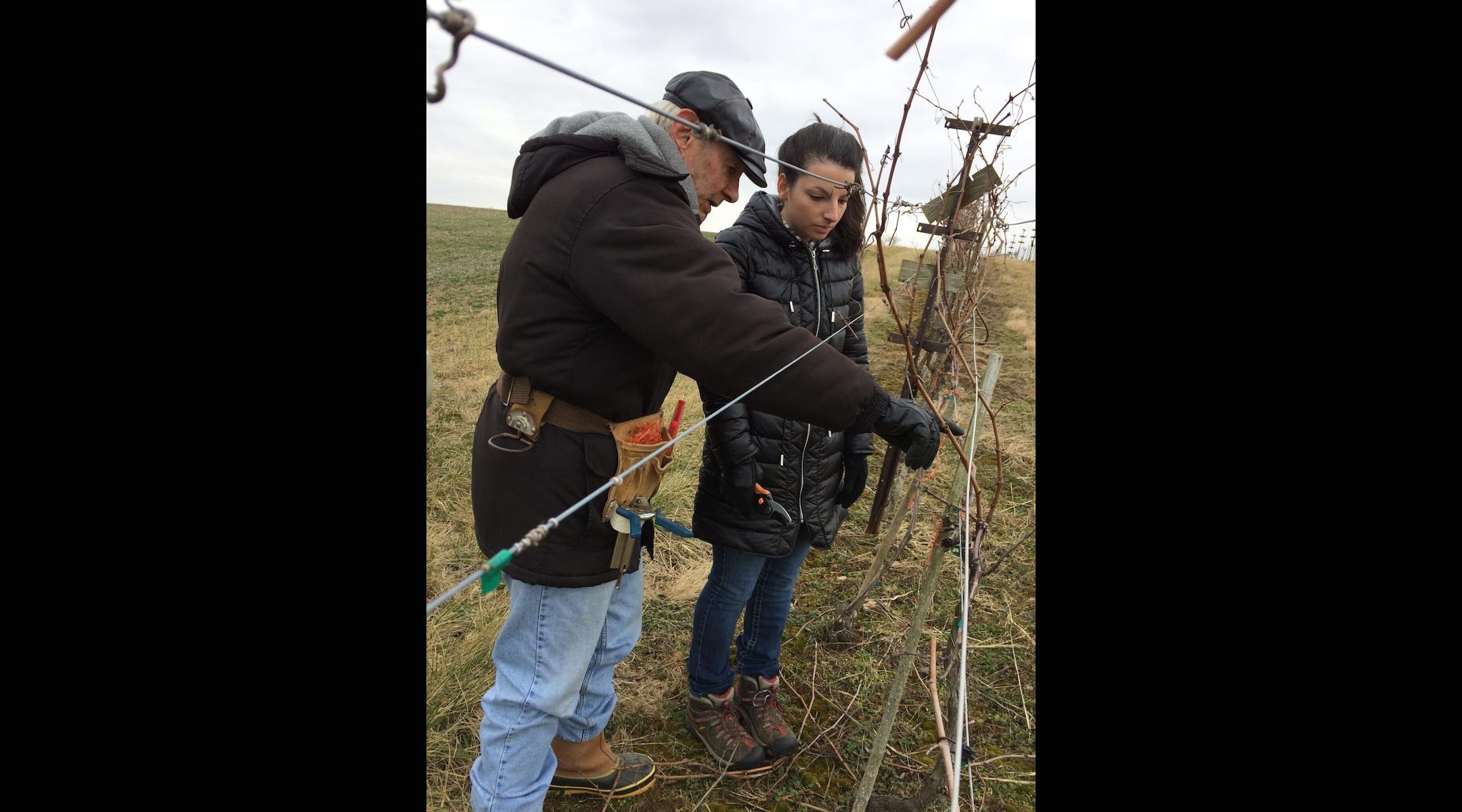 Lipman learns to prune vines from her grandfather. (Loew Vineyards)

“The way our family oriented ourselves, everything was about preserving the past,” Lipman says. “There was little discussion of the future.”

COVID, however, served as a pivotal moment for the family business. Not only did Lipman have to safeguard her grandparents, who enjoyed interacting with customers in their tasting room, she knew she had to implement some operational changes if she wanted a sustainable future.

Citing Hillel the Elder’s iconic quote — “if not now, when?” — Lipman and her family made a significant investment in new fermentation tanks, which has allowed them to increase production to meet growing demand. They also remodeled the tasting room, created an online reservation system and updated their website to showcase the family’s long history in the business.

Lipman credits her grandmother with helping to facilitate a lot of the recent changes.

“She knows we have something that cannot die,” Lipman says of her grandmother. “Without her, we wouldn’t have been pushing for a future.”

Locating historical documents about her family required perseverance. Lipman joined a global Facebook group of mead-makers and posted about her family’s long tradition. Doing so helped her locate mead labels from her great-grandfather’s business, and even an article in a Lvov newspaper about how her mead-making great-uncle collected tzedakah.

She also uncovered many documents that traced the history of mead in Europe — how it was predominantly produced by monks in the 1600s to its heyday in the 1800s through World War II.

“These documents just say the businesses disappeared after World War II,” Lipman says. “It doesn’t say that Jews owned these businesses and that is why they were gone. The people and the industry were destroyed by the Nazis. I intend to make that known.”

As the oldest grandchild, Lipman spent much of her childhood at her grandparents’ vineyard. From cooking Passover meals with her grandmother to riding on her grandfather’s tractors out to the vineyards, Lipman was and remains exceptionally close to her grandparents.

As she got older, her grandfather taught her chromatography, a technique that allows you to investigate the flavor of the wine. Lipman ultimately decided to study plant science at the University of Maryland and even interned at an organic vineyard in France’s Loire Valley.

Lipman doesn’t think her grandparents were intentionally grooming her to work on the vineyard, but does believe “they wanted me to love the vineyard as much as they do,” she says.

She continues: “When you are 21, you think, ‘Sure being in the alcohol business sounds great! I worked at beer and wine stores then, but the more I learned about the industry, the more serious I became about it [as a future career].”

As Lipman’s family prepares for Rosh Hashanah 5782, be some of their red wines and meads will be on the table — along with challah, brisket and salmon. Lipman also buys a number of apple varieties at the farmers market, and they’ll have honey and salt flights, too.

“Our family has one of the longest production of meads in the world,” she says. “It is a pretty incredible story.”

Lipman hopes to continue to produce wines well into the future and watch the roots that her family planted so long ago continue to flourish. In the meantime, the Loew family looks forward to saying “L’chaim!”— “to life!” — over their wines this Rosh Hashanah, knowing all too well the meaning of the phrase.