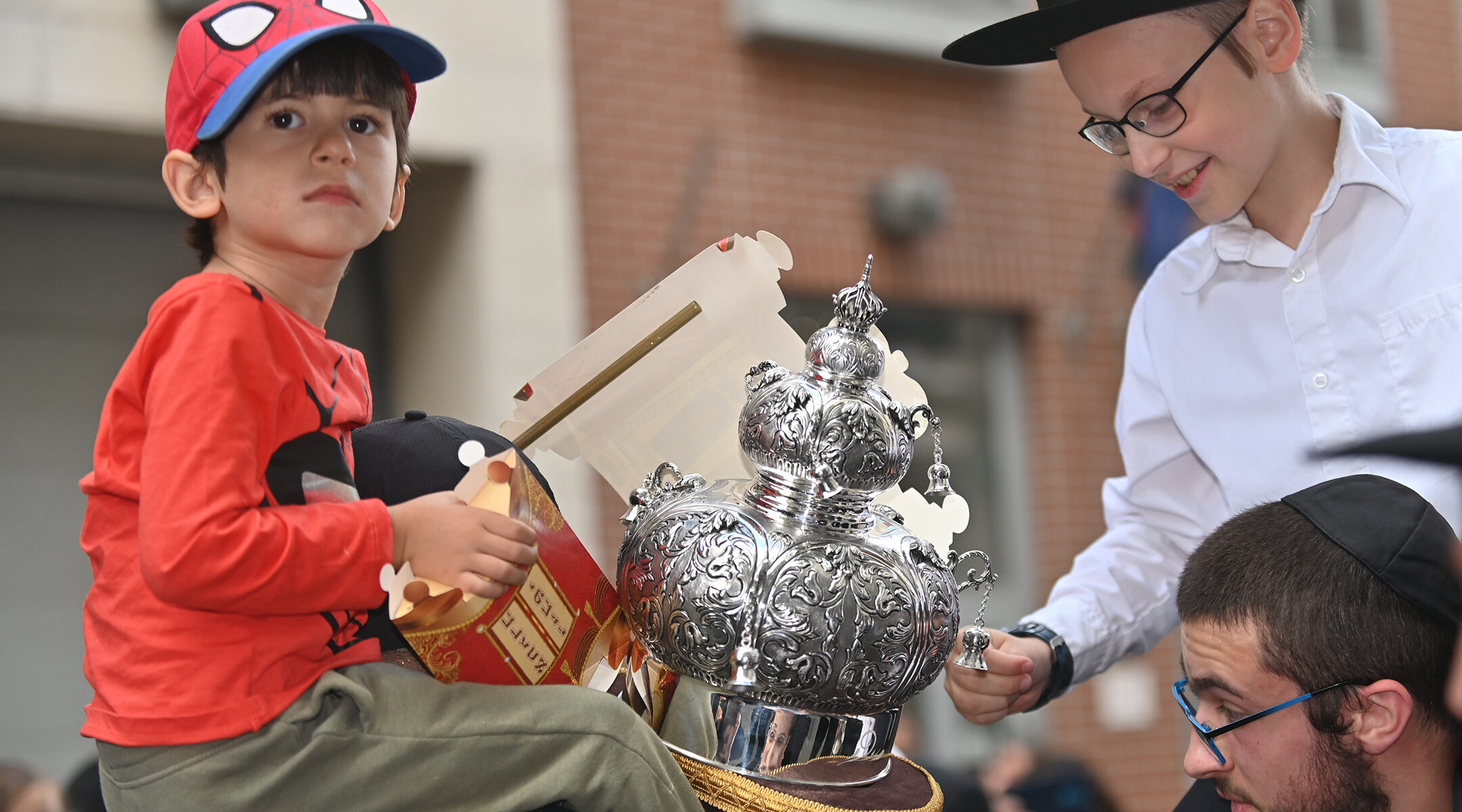 Children examine a Torah scroll as it is carried into the Vorosmarty Street Synagogue in Budapest, Hungary, Aug. 27, 2021. (Cnaan Liphshiz)
Advertisement

One is situated in the bustling center of Budapest, while the other is a 50-seat synagogue in an apartment building.

The latter — the Vorosmarty Street Synagogue — is owned by MAOIH, an umbrella group of Orthodox congregations. But MAOIH has neither the congregants nor funds to renovate and operate the place, so it will be run by EMIH, a larger umbrella organization affiliated with the Chabad-Lubavitch movement. EMIH has about 20 synagogues along with some 30 emissaries.

“It’s better that the synagogue lives than to have it remain disused as it has been for decades,” Robert Deutch, the president of MAOIH, told reporters last week.

The country’s three largest Jewish groups — EMIH, MAOIH and the largest, Mazsihisz — have a tenuous relationship, rife with disputes over ideology, theology and finances.

On Friday, about 300 people, most affiliated with EMIH but also including some nonobservant Hungarian Jews, attended a street celebration that culminated with the affixing of a new mezuzah at the synagogue by Rabbi Szlomo Koves, the head of EMIH. The structure received a luxurious-looking interior decoration featuring marble walls and wooden panels with LED lights.

Locals posed to have their picture taken with the revelers as they danced in a procession to music blasting from speakers they brought with them. But two middle-aged men also hurled insults at the revelers. There were no physical assaults.

The larger synagogue opened in the leafy and placid Ujbuda neighborhood on the western banks of the Danube River. Housed in a historical Bauhaus building, the Ujbuda Synagogue has about 200 seats and a circular prayer hall inside a rectangular space. EMIH owns and operates the shul.

Following the opening, the Hasidic rapper Nissim Black performed in a concert that drew hundreds of listeners, including many non-Jews.

The concert was the closing event of the weeklong Jewish Cultural Festival, which also included a celebration of the slow-cooked Jewish dish cholent that many observant Jews make for Shabbat. On Sunday, hundreds of pounds of kosher cholent were given out free to passersby at a park near the synagogue.

Separately, Mazsihisz inaugurated a new wing at the city’s Jewish Charity Hospital on Sunday that was built with a $14 million grant from the government.

The addition “advertises that Hungarian Jews vouch for one another and for others,” Zoltan Radnoti, a senior rabbi within Mazsihisz, told the Jewish Telegraphic Agency.

Hungary once had four hospitals owned by Jewish communities, but only one remained after the Holocaust, in which the Nazis and local collaborators killed more than half of the prewar Jewish population of about 1 million. Only about 47,000 people who define themselves as Jewish now live in Hungary, according to the London-based Institute for Jewish Policy Research.