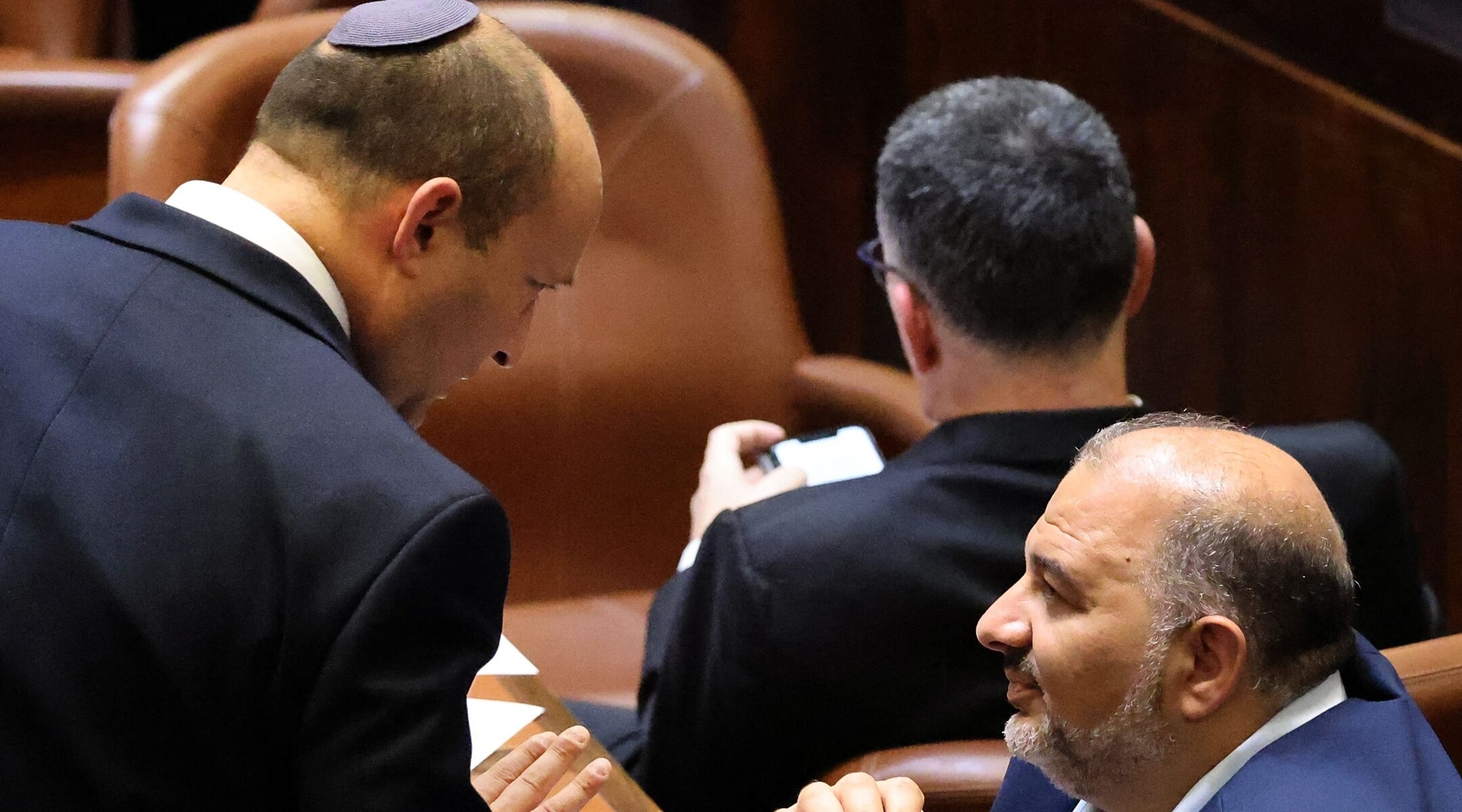 Naftali Bennett, left, chats with Mansour Abbas during a special session to vote on a new Israeli government at the Knesset in Jerusalem, June 13, 2021. (Emmanuel Dunand /AFP via Getty Images)
Advertisement

(JTA) — Israeli Prime Minister Naftali Bennett has made Time magazine’s list of the world’s 100 most influential people, and his Arab-Israeli coalition partner Mansour Abbas thinks he knows why.

“It all comes down to courage,” Abbas, the leader of the first Arab party to join an Israeli governing coalition, writes in the accompanying blurb explaining why his political opposite was recognized on the list published Wednesday.

“After four elections in two years, a bold act was needed to unite a country frayed by political stalemate and brought to a desperate standstill. Something dramatic needed to change, but more importantly, someone courageous needed to make that change.”

Abbas and Bennett agree on little ideologically. Abbas leads the United Arab List, a party that champions Palestinian self-determination, while Bennett comes from Israel’s right wing and has pledged that a Palestinian state will not arise on his watch. But they coalesced around the goal of removing Bennett’s predecessor, Benjamin Netanyahu, who they saw as divisive and corrupt.

Arab parties have been part of coalition negotiations previously, and for a period in the 1990s supported a government from outside the coalition. But, Abbas notes, those negotiations always were conducted behind closed doors.

“I don’t do things in the dark,” Abbas quotes Bennett as telling him when Bennett surprised him by opening their coalition talks to the media.

Bennett is under Time’s “Leaders” category. Other Jewish figures in that category are Rochelle Walensky, the director of the U.S. Centers for Disease Control who has become a public figure during the coronavirus pandemic, and Ron Klain, President Joe Biden’s chief of staff. Julie Gerberding, who served as President George W. Bush’s CDC director, wrote the Walensky appraisal, and Hillary Clinton wrote the appraisal of Klain.

The “Artists” category features actress Scarlett Johansson, appraised by actress Jamie Lee Curtis, who says that watching Johansson playing her mother, Janet Leigh, in a movie about “Psycho” director Alfred Hitchcock, she forgot for a moment that she was watching a performance. Curtis, like Johansson, is the product of a marriage that has Jewish and Danish roots.

Also on the Time list, in the “Icons” category, are brother and sister Palestinian activists Muna and Mohammed El-Kurd, who focused international attention this spring on efforts to evict Palestinians who have lived in their eastern Jerusalem home for decades.

Biden also made the list, and his blurb was written by Bernie Sanders, the Jewish Vermont senator who is the de facto leader of progressives. Sanders emerged last year as Biden’s most serious rival in the Democratic presidential primaries.

“Joe Biden and I have strong disagreements, but it must be acknowledged that he is the first President in a very long time who is attempting to address the fundamental crises facing our nation,” Sanders said, referring to the pandemic and its repercussions to the economy, racial tension, climate change and the growth of the authoritarian right.