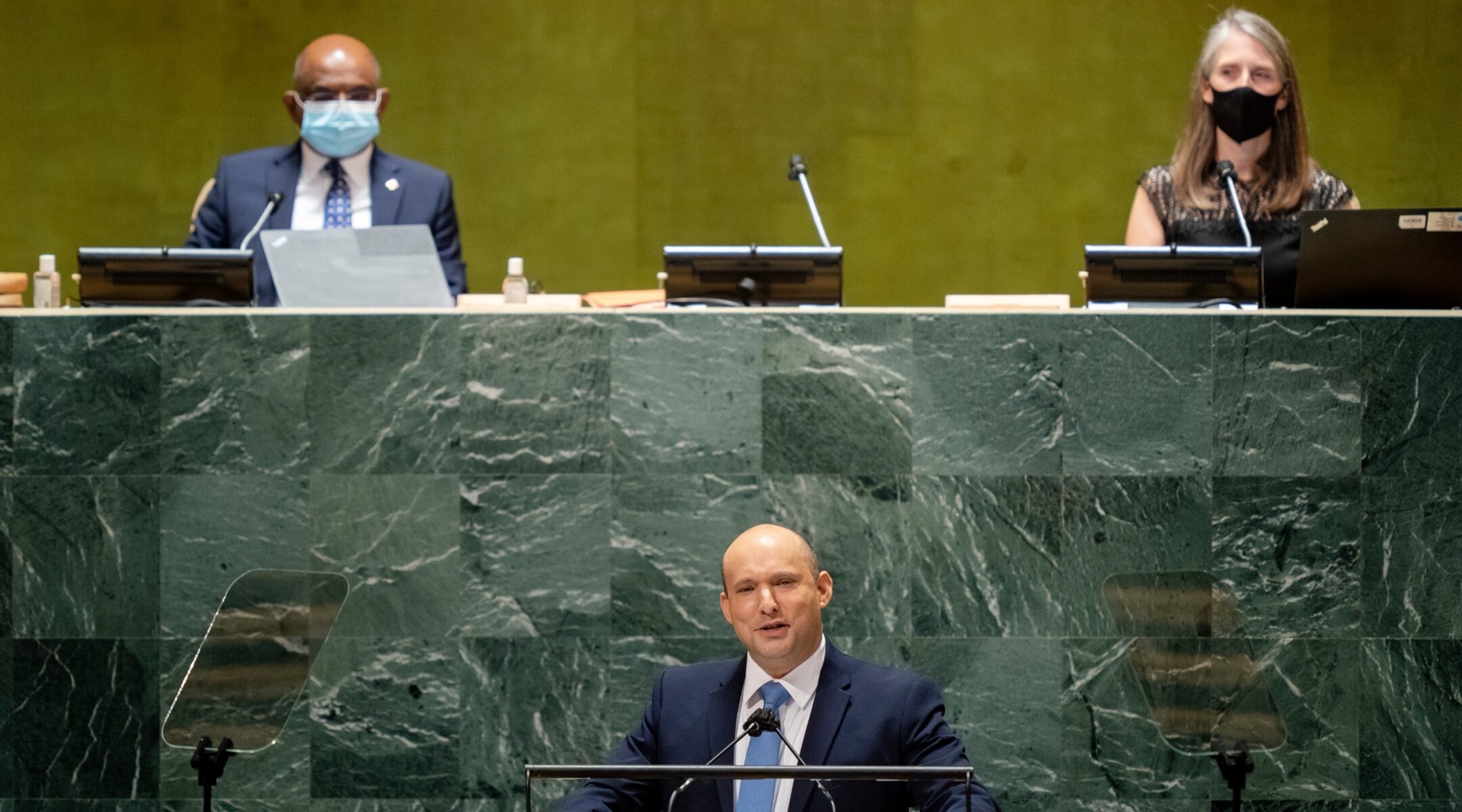 (JTA) — In his first speech to the United Nations General Assembly, Israeli Prime Minister Naftali Bennett addressed the twin threats of Iran and the coronavirus, in keeping with his quest for a relationship with the international community that is less confrontational than his predecessor’s.

Bennett launched his speech Monday morning with a plea to see Israel not as forever entrenched in warfare, but as a contributing member of the international community.

Israel, Bennett said at the outset, “is a beacon of democracy, diverse by design, innovative by nature and eager to contribute to the world.”

“For way too long, Israel was defined by wars with our neighbors,” Bennett said. “But this is not what Israel is about. This is not what the people of Israel are about.”

Since his installation in June after a close election in March, Bennett has sought to distinguish his government from those led for 12 years by Benjamin Netanyahu, whose main focus in foreign policy was confronting and containing Iran, at the expense of good relations with a number of countries, and with Democrats in the United States.

Bennett has so far made it a mission to restore those relations. Speaking English with the same fluency Netanyahu commanded, he devoted the first half of his speech to working with the international community to combat the coronavirus pandemic.

It was a sharp contrast with speeches by Netanyahu to the same body, which were almost entirely fire and brimstone warnings about the dangers Iran posed, often accompanied by visual aids.

Bennett put the battle against the disease in the context of political polarization, which has fueled vaccine hesitancy.

“In a polarized world, where algorithms fuel our anger, people on the right and on the left operate in two separate realities, each in their own social media bubble, they hear only the voices that confirm what they already believe in,” he said.

He did not hold back on warning about the dangers he believes Iran poses, particularly with its new hard-line government. He described the dangers in the same terms he has used to oppose the Biden administration’s plans to reenter the Iran nuclear deal, an outlook that he shares with Netanyahu.

“Iran’s great goal is crystal clear to anybody who cares to open their eyes: Iran seeks to dominate the region — and seeks to do so under a nuclear umbrella,” he said.

Another consistency between Bennett and Netanyahu in terms of U.N. speeches: paying little if any attention to the Israeli-Palestinian conflict. The Biden administration, which has made clear its preference for Bennett over Netanyahu, wants to advance Israeli-Palestinian talks, but Bennett has said that is unlikely now as he leads a coalition that straddles Israel’s left and right, and is more focused on domestic issues.