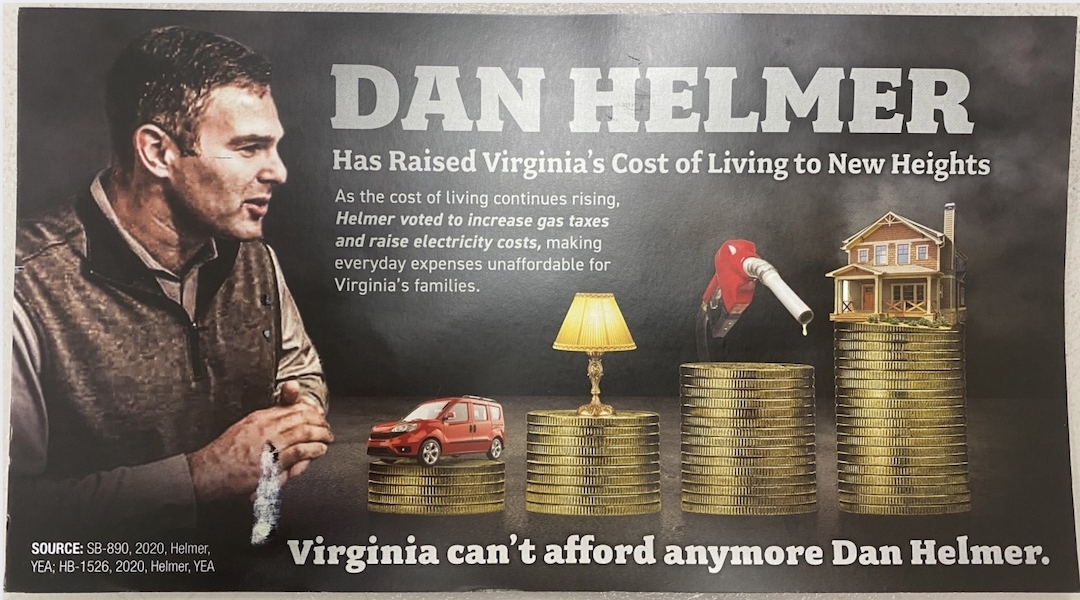 A flier distributed by a Republican candidate for Virginia's statehouse in the 2021 elections depicts the Jewish incumbent with piles of gold coins. (Ron Kampeas)
Advertisement

WASHINGTON (JTA) — A GOP flier distributed to homes in the Virginia suburbs of Washington depicts the Jewish Democratic candidate for the House of Delegates at a table stacked high with gold coins, a pairing of images of Jewish candidates with money that has proliferated in political attack ads in recent years.

“Dan Helmer has raised Virginia’s cost of living to new heights,” the mailer said. It was distributed this week by Helmer’s Republican challenger, Howard Pyon.

Helmer, the incumbent in the House of Delegate’s 40th District, which covers parts of Fairfax and Prince William counties, told the Jewish Telegraphic Agency that the photoshopped scene was clearly antisemitic and that he had heard from Jewish families in the district who were outraged.

“People are deeply upset by this,” said Helmer, an incumbent freshman running for reelection. “They expect us to be talking about the issues, not to be using antisemitic tropes.”

A spokesman for Pyon said the depiction in the recent mailer was not antisemitic and could apply to any politician accused of voting to hike taxes.

“It’s showing the increases because of his votes,” Pyon’s spokesman said of the four piles of coins topped with a car for car taxes, a lamp for utilities, a gasoline pump, and a house. Helmer’s being Jewish “was not on Harold’s mind” when the candidate approved the mailer, the spokesman said.

Similar depictions of Jewish candidates reveling in cash in recent election cycles have drawn condemnations from Jewish groups. Most of the attacks have targeted Jewish Democrats, although in one instance, a Republican Jewish nominee was targeted by Democrats.

One of Helmer’s fundraising emails in the 2019 election condemned the recent spike in antisemitic attacks and accused his opponent, a longtime incumbent, of ignoring it. It showed Helmer celebrating his son’s bar mitzvah. Helmer’s grandmother spoke at his swearing-in in 2020 about her joy, as a Holocaust survivor, at witnessing her grandson’s election to public office.

Helmer also said that the way the original photograph was made grainy in the photoshopped mailer appeared to accentuate his nose. Helmer, a veteran, also noted that the photoshopped version erased the West Point insignia on his jacket. The Pyon spokesman denied that there was an effort to make Helmer’s nose more prominent, noting that making photographs of opponents more grainy was commonplace in political ads.

Helmer won the 2019 election by a close margin, ousting a long-term Republican. State Republicans have invested in Pyon’s candidacy, hoping to wrest the House of Delegates back from Democratic control.