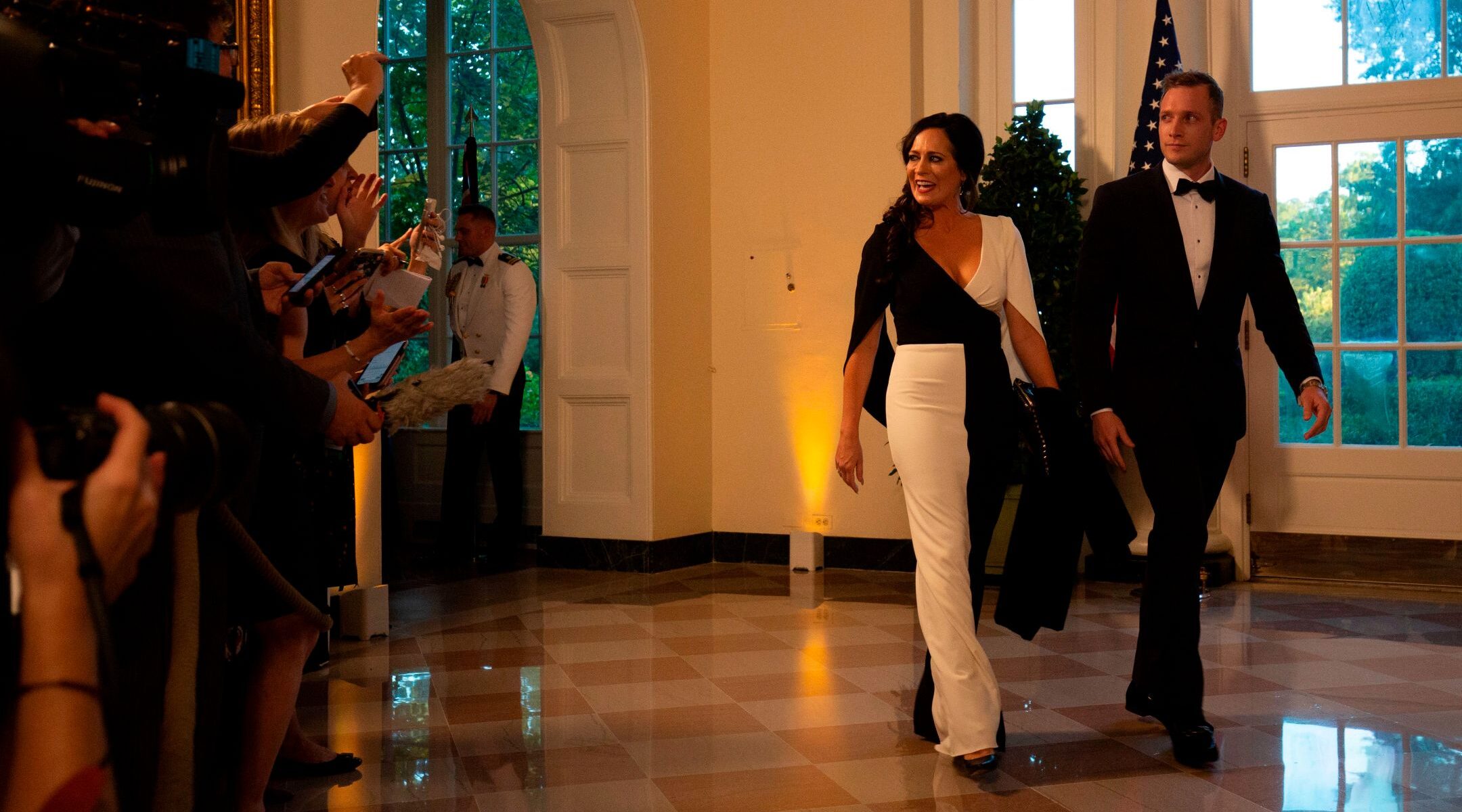 (JTA) — Stephanie Grisham, who was a press secretary for former President Donald Trump and his wife Melania, accused a Jewish Trump aide of physically abusing her, adding that the Trumps showed no interest in investigating the matter.

Max Miller, a scion of a well-known Cleveland Jewish family who is running for Congress with Trump’s enthusiastic endorsement, denied the charge and is seeking to silence Grisham through legal means.

Grisham made her accusation on the record for the first time in a Washington Post op-ed on Tuesday, but it was not the first time it was reported. Politico, in a long profile of Miller in July, reported that he had shoved and slapped Grisham, with whom he was involved in a romantic relationship, while both were working at the White House.

The Politico profile focused on Miller’s temper, noting that he was charged with assault in 2007 and that the charge was eventually dismissed, in part because he was a first-time offender. Miller denied the charge of abusing Grisham, and Grisham at the time declined to comment.

Grisham going on the record with the charges lends them more heft as Miller’s race for Congress heats up. He immediately filed a lawsuit accusing Grisham of defamation and sought an injunction — which the court declined — to keep her from discussing the charge. She did so on CNN on Tuesday night.

Grisham this week published “I’ll Take Your Questions Now: What I Saw at the Trump White House,” an account of her five-year stint working for the Trumps, at first for the campaign and then as press secretary for Melania Trump through the Trump presidency. For a period she filled that role for President Trump as well.

The book describes how Grisham’s accumulating doubts about the Trumps, whom she once idolized, culminated in her decision to resign on Jan. 6, when Melania Trump declined Grisham’s suggestion that the First Lady condemn the rioting at the Capitol by insurgents seeking to keep Trump from leaving office.

Melania Trump, responding to the book, called it “an attempt to redeem herself after a poor performance as press secretary, failed personal relationships, and unprofessional behavior in the White House.”

Grisham wrote in her op-ed that Melania Trump had at first seemed sympathetic when Grisham described Miller’s alleged abuse after her relationship with him ended in 2020. But according to Grisham, after the press secretary told her husband about the matter, the concern was dropped. The abuse, Grisham said, “didn’t even seem to register.”

“There was no follow-up from either of them to see if I needed help or protection,” Grisham wrote. “There was no investigation ordered. No effort to get to the bottom of this.”

Miller launched his campaign earlier this year to replace Anthony Gonzalez, a conservative Republican in Ohio’s 16th District whom Trump targeted for being one of the 10 Republicans who voted to impeach Trump for spurring the Jan. 6 riot. Gonzalez last month said he would not run again, and Miller now faces a single rival for the Republican nomination, although there is time for others to join.

Miller’s grandfather, Sam Miller, was a major Jewish philanthropist in the Cleveland area. He died in 2019.