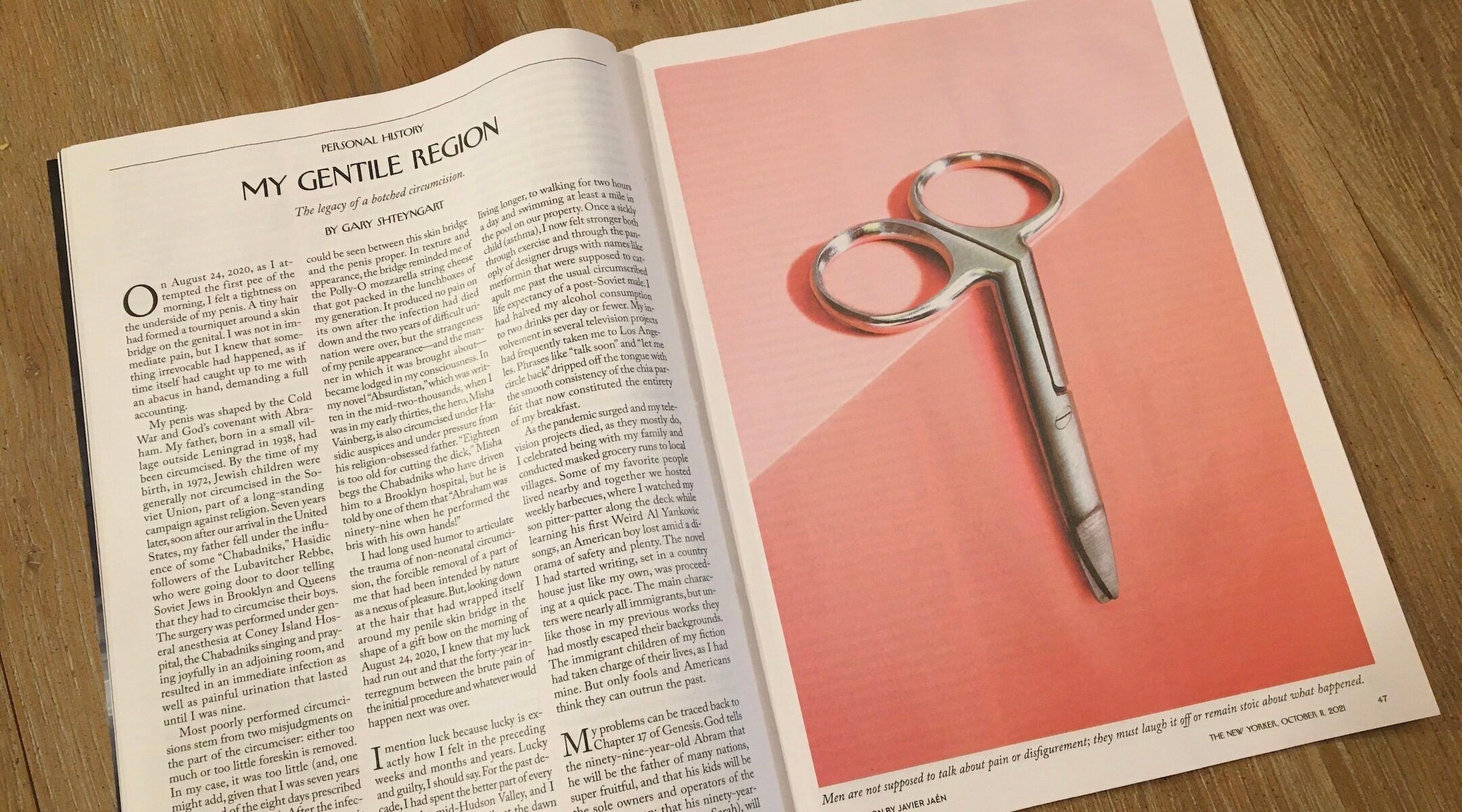 (New York Jewish Week via JTA) — There’s a lot to say about Gary Shteyngart’s New Yorker essay on the botched circumcision he suffered as a 7-year-old Russian Jewish immigrant in Brooklyn. The novelist doesn’t explicitly come out against circumcision, although he does ask if the procedure is “indispensable enough for us to continue cutting one of the most sensitive parts of the male anatomy, where any miscalculation may lead to tragedy.”

Leave it to the author of “Absurdistan” and the forthcoming “Our Country Friends” to write a darkly funny account of a medical nightmare. And give it to artist Javier Jaén for finding a new way to illustrate an article about circumcision: The New Yorker story features his image of surgical scissors draped Salvador Dali-style over a ledge to form a sort of stainless-steel phallus.

I’ve edited more than a few circumcision stories myself, and it is always a challenge to illustrate them. Few editors outside a medical journal would show the procedure itself.

A few years ago I wrote a piece for the Jewish Telegraphic Agency titled “OK, wise guy, how would YOU illustrate a circumcision?” I brought examples of how other media had handled it: Least provocatively, editors go with non-graphic photos of an actual bris, or even reproductions of Old Masters’ paintings of biblical circumcisions.

But many take the abstract route: a pencil sharpener, a half-peeled banana, pictures of the mohel’s toolkit, a closeup of a distressed baby, an ominous photo of a scalpel from the baby’s point of view.

Such illustrations usually treat circumcision as comic or horrific; there is little middle ground. This might reflect the decisions of male editors, who cringe or laugh when the topic turns to their nether regions. But it also reflects the polarizing nature of circumcision itself. For the many people who either support or simply tolerate the procedure, circumcision can be profound, innocuous or even sort of goofy (at one point, even Shteyngart can’t resist comparing a penis to a “walrus wearing a cape”). For opponents of circumcision, the so-called intactivists, cutting is barbaric, and deserves to be treated with the seriousness of cancer or child abuse.

What Shteyngart’s essay does so effectively – or insidiously, depending on your point of view — is live in the middle ground: The suffering he undergoes as the result of his mangled member is no laughing matter, but by the end of the essay he is no intactivist. Ultimately, he is asking some very difficult questions about a procedure that we Jews either take for granted or place at the very center of male Jewish identity. You can cite statistics showing circumcision is overwhelmingly safe, as some did in responding to Shteyngart, but you can’t deny his ordeal.

The Jewish writers who defend the practice often write movingly about the meaning and power of brit milah, surfacing its profound symbolism even as they cite medical evidence showing it to be an overwhelmingly safe and even beneficial procedure. Intactivists almost always go too far, exaggerating the negative consequences and occasionally dipping into antisemitism and Islamophobia. Neither side is likely to win converts (although, in fact, Judaism does win converts, at which point the males have a decision to make).

And that is why I predict Shteyngart’s story will resonate widely in the debate over circumcision. He is no polemicist. He raises challenging questions that rabbis and mohels will have to consider the next time a reluctant couple pays them a visit. “I only wish to expand the conversation for future parents,” Shteyngart wrote on Twitter, where a number of A-list authors congratulated him for his essay,

Coincidentally, JTA published an article last week about a new organization, Bruchim, that is seeking to normalize the decision by Jewish parents not to circumcise their boys. “Families who are making this decision shouldn’t feel marginalized and they shouldn’t feel like they have to be secret about it,” said Lisa Braver Moss, Bruchim’s co-founder and president.

Moss could also be talking about intermarriage or gay Jews — or at least the way people talked about intermarriage and LGBT inclusion in the Jewish community 20 years ago. Today, unlike in a previous era, few Jewish organizations would support “marginalizing” interfaith families or LGBT Jews. In the example of intermarriage, that’s a reaction to demographics and a shift in empathy: 72% of American Jews who married between 2010 and 2020 chose a non-Jewish spouse. Marginalizing the intermarried means alienating a cohort too large to ignore.

The JTA article indicates that the same thing — and same pressures — might be coming to bear on circumcision: The growing number of interfaith families, even the majority raising children as Jewish, suggest that the number of those deciding to leave their boys uncircumcised is “likely to be growing.”

More and more, rabbis and grandparents will have to decide between pushing reluctant couples away or looking past their decision not to circumcise in order to welcome their families into Jewish life.

At the moment, circumcision is so fundamental to male Jewish identity that those Jews forgoing it remain a tiny minority. But as the Jews themselves demonstrate again and again, a tiny minority can assert a powerful presence. Soon we’ll all be drawn into this debate.