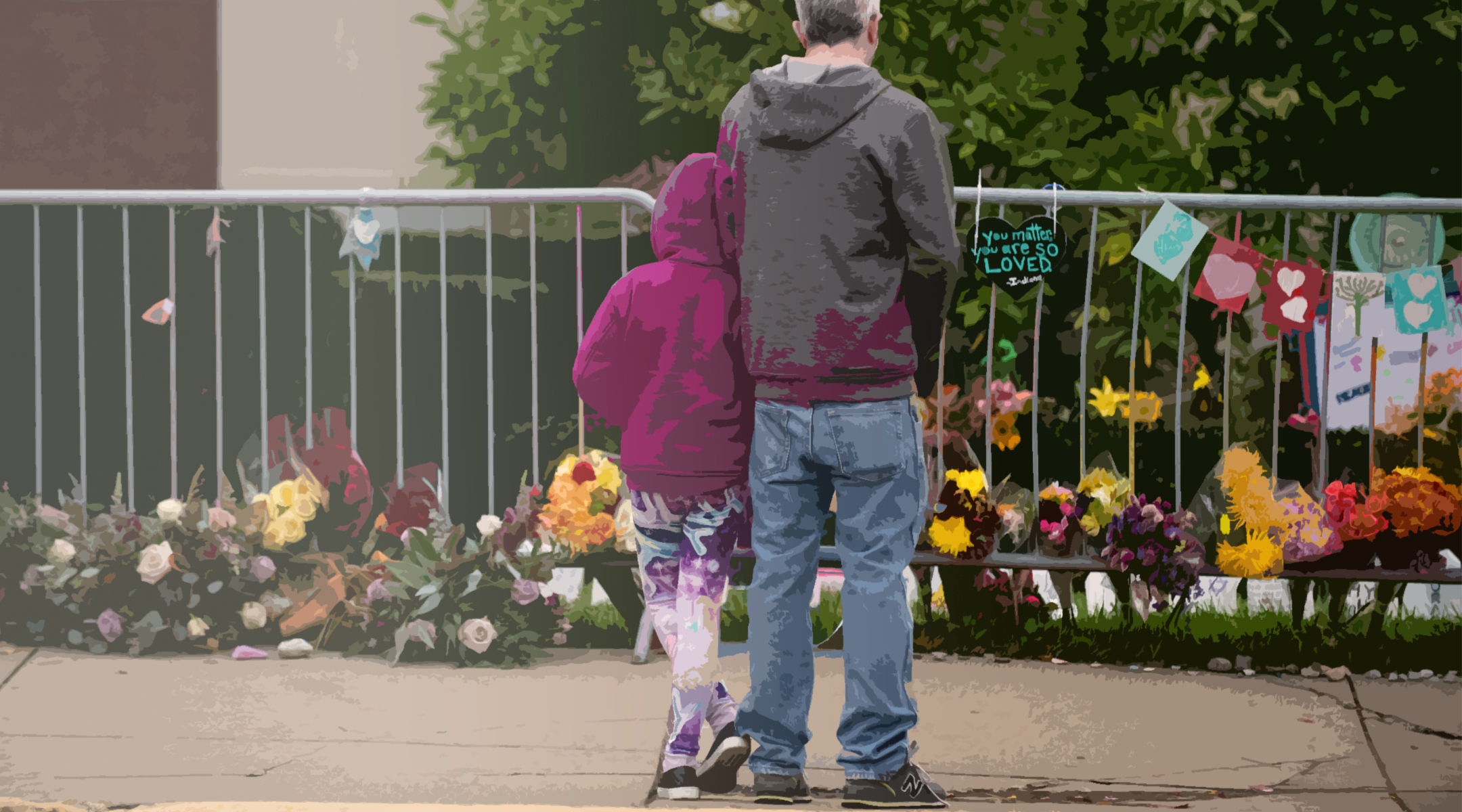 (Pittsburgh Jewish Chronicle via JTA) — As Pittsburgh approaches the three-year anniversary of the Tree of Life synagogue shooting, the city will play host to a high-profile new effort to find a global bipartisan response to rising tides of hate.

The three-day, in-person Eradicate Hate Global Summit, which will be held in the city Oct. 18-20, will feature more than 100 speakers and panelists, including former President George W. Bush (in a virtual address); current Homeland Security Secretary Alejandro Mayorkas, who is Jewish, and Anti-Defamation League CEO Jonathan Greenblatt.

Other speakers will include members of the Pittsburgh Jewish community, including members of Tree of Life, whose building also housed two other congregations.

The idea for the summit was conceived shortly after the 2018 mass shooting, the deadliest antisemitic attack in U.S. history. “When Tree of Life happened, I, like everyone else in the city of Pittsburgh, thought, ‘What do I have to bring to the table to help?’” said summit co-chair Laura Ellsworth, an attorney at the law firm Jones Day.

Ellsworth is not Jewish, but as the first partner-in-charge of the firm’s Global Community Service Initiatives, she leads the firm’s rule of law initiatives in 43 offices on five continents. It includes a hate crime task force that represents victims on a pro bono basis.

“In the context of that work, I had seen fabulous people working on the field in different disciplines who weren’t talking to one another,” Ellsworth said. She reached out to a longtime friend and adviser to co-chair the event with her: Mark Nordenberg, chancellor emeritus of the University of Pittsburgh. Nordenberg was already helping the local federation distribute $6 million in funds donated to the local Jewish community following the attack.

Ellsworth, who placed third in the Republican primary for the Pennsylvania governor’s race in 2018, says she wanted to find a way to create real-world solutions to battle hate — not just antisemitism, but hatred toward immigrants, the  LGBTQ+ community, Muslims and others.

“Laura called and said, ‘We’ve got to do something to make certain that Pittsburgh becomes better known for the way it responded to the attack, as opposed to simply being the site of the attack,’” Nordenberg said.

Greenblatt’s participation at the summit is notable given that he has sharply criticized Fox News, a high-profile client of Ellsworth’s law firm, Jones Day, for the network’s role spreading what the ADL says are hateful ideologies. The firm also took heavy criticism for representing some legal challenges to the 2020 Presidential election on behalf of groups supporting President Trump, challenges which observers have said helped fuel the fire that led to the Jan. 6 attempted insurrection on the U.S. Capitol by pro-Trump extremist groups.

Greenblatt did not return a request for comment from the Jewish Telegraphic Agency. The ADL has worked with Jones Day’s hate crimes task force on other initiatives, according to the firm’s website.

Since the attack, Pittsburgh has played host to many discussions and events built around combating hate and antisemitism. This summit will be different, its organizers say. For one, the sheer scale of the event is unprecedented.

“The reaction from people who are devoting huge parts of their life to this has been the same: No one has done this. No one has brought us together from disparate geographic locations across disciplinary lines with different strategic approaches to counter the spread of hate,” Nordenberg said.

For another, almost every speaker will be in-person. The isolation created by COVID-19 has exacerbated online recruitment into hate groups, Ellsworth said, noting that is part of the reason she was adamant the summit not be virtual.

Ellsworth said it’s important that people experience the seminar in person and have the opportunity to “engage with these people and share their own ideas.” She said there is a livestreaming opportunity, but those participating remotely will miss the chance to experience the summit in person and meet the people, “which is a huge part of what we’re trying to do.”

Former Pennsylvania Gov. Tom Ridge, who will be speaking at the summit, was instrumental in corralling the lineup’s top dignitaries to appear in person and waive their  speakers’ fees, Ellsworth said.

“You can throw a dart at just about any map and it will land on a region impacted by hate-driven acts of violence,” Ridge said in a statement to the Pittsburgh Jewish Chronicle. “That’s how pervasive this challenge is and why the Eradicate Hate Global Summit is so important. I’m pleased to be part of the Summit’s worldwide mission. While we can never truly eradicate hate, I’m confident we can weaken it at its sources and achieve a better, safer future for us all.”

Nordenberg said the expectation is that, in future years, the summit will move to the Collaboratory Against Hate, a joint research and action center created by the University of Pittsburgh and Carnegie Mellon University in the wake of the Tree of Life shooting to study and combat extremist hate.

“This is going to be a challenge,” he said. “Part of that challenge will be fundraising but what I think we’re doing is sufficiently distinctive that, while the initiative is physically located in Pittsburgh, there will be people from more distant places who care deeply about stopping the spread of hate.”

Another expected speaker is Kathleen Blee, who serves as co-director of the Collaboratory Against Hate. She is also a member of Congregation Dor Hadash, one of the three congregations attacked in the Tree of Life building.

“Sometimes people talk fatalistically and say things like, ‘people will always hate people,’ and ‘there will always be crazy people who take out their feelings in violent ways,’” Blee said. “What we’re seeing in Pittsburgh and nationally and internationally is something different that we can’t chalk up to human nature. We’re seeing people deliberately and strategically provoked by a set of actors who are trying to damage society.”

Blee has been studying hate for years as an academic. Now, as a member of the congregation that was targeted by hate, she said, “I know more about being in the victim community than I did when I was one step removed.”

Talking about the relationships among all forms of hate will be another major goal of the summit, said participant Heidi Beirich, who co-founded the Global Project Against Hate and Extremism in 2020 and is a former researcher with the Southern Poverty Law Center.

“At the end of the day, most of the people that hate Jews hate a whole bunch of other people,” Beirich said. “These things are really connected. The Tree of Life was emblematic of this. The guy was definitely an antisemite, but he was going to the synagogue because he was angered about immigration, that immigrants were essentially wiping out white power. These things do not exist in isolation.”