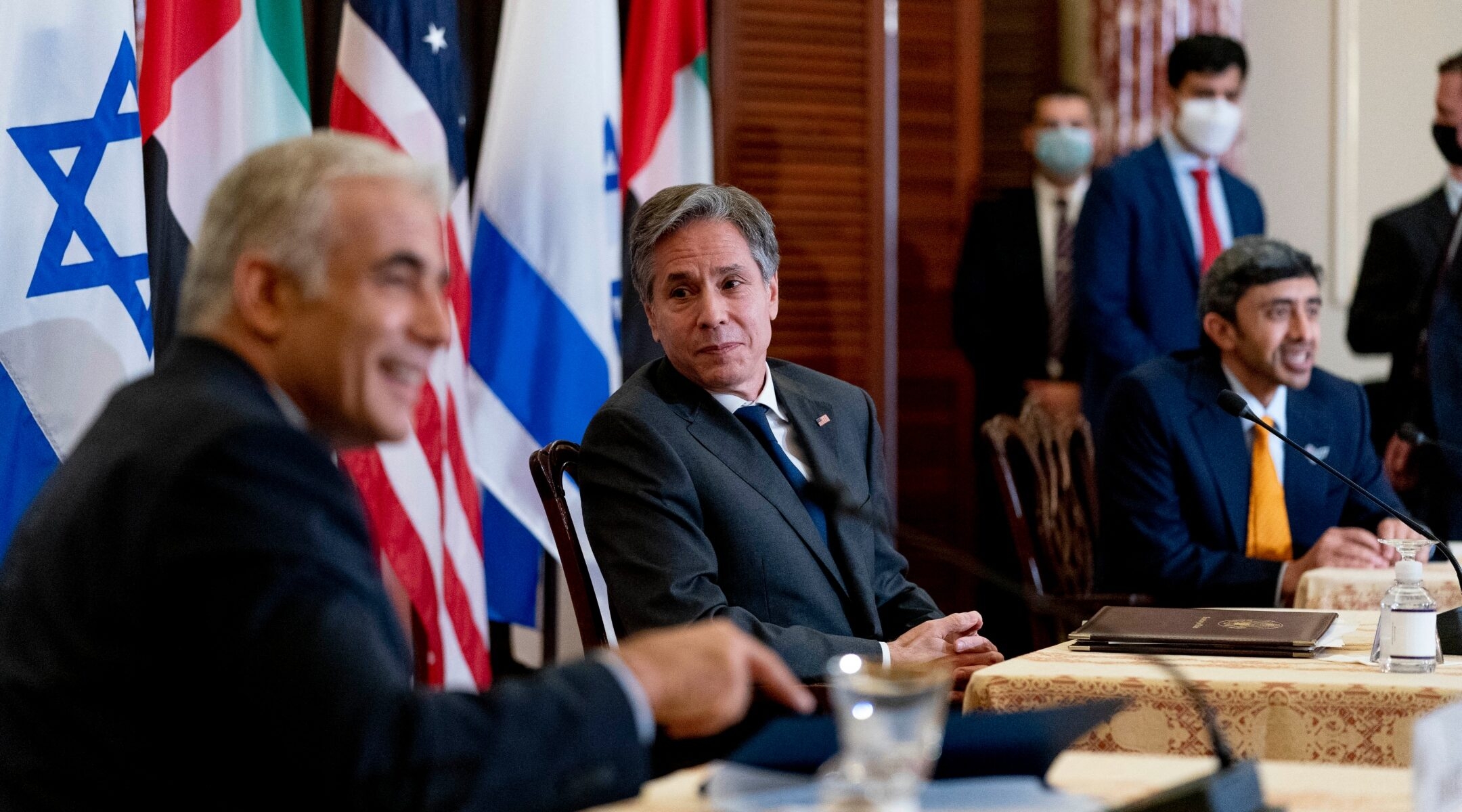 WASHINGTON (JTA) — Yair Lapid got what he wanted out of his Washington visit: the word “every,” instead of “other.”

During Israeli Prime Minister Naftali Bennett’s first meeting with President Biden in August, Bennett was happy with what he heard: the American president, despite his desire to rejoin the Iran nuclear deal, said that if Iran does not engage in good faith diplomacy with the nations involved in the deal, the U.S. would consider “other options” in getting Iran to curb its nuclear ambitions.

It was a sign that Israel and U.S. Democrats, long far apart in their opinions on how to best contain Iran, were coming closer together.

Lapid, on his official trip as foreign minister in Washington, pushed things along even further.

He looked on Wednesday as Antony Blinken, the U.S. secretary of state, said “every” option was on the table if Iran does not engage in a good faith effort to negotiate the U.S. reentry into the nuclear deal.

It was one of those blink-and-you-miss-it moments in diplomacy, but it had significant weight. According to insiders involved in the issue, “other options” can be seen as referring to enhanced sanctions, or other non-military forms of pressure. “Every option” means military action may be on the table as well.

“We will look at every option to deal with the challenge posed by Iran,” Blinken said at a press conference called to announce initiatives that would advance the Abraham Accords, the normalization agreements between Israel and four Arab nations. “We continue to believe that diplomacy is the most effective way to do that, but it takes two to engage in diplomacy, and we have not — we have not seen from Iran a willingness to do that at this point.”

Blinken made the statement on the State Department’s eighth floor, flanked by Lapid and the United Arab Emirates foreign minister, Abdullah bin Zayed Al Nahyan. The foreign ministers were together to announce new Abraham Accords initiatives, but the symbolism of Blinken’s stronger language in the company of two of the Middle East nations who feel Iran’s threat most sharply was unmistakable.

A senior Israeli official told reporters after the meetings that the Israeli and U.S. delegations discussed Iran extensively behind closed doors. “While there may not have been agreement, there was the discussion of options that have not been on the table previously,” said the official, who spoke anonymously because of the sensitivity of the information.

Along with Bennett, Lapid has spearheaded the effort to repair Israel’s ties with the Democratic Party, which were corroded during the 12 years Benjamin Netanyahu was prime minister. Netanyahu was antagonistic toward that half of the American polity, toward which the clear majority of American Jews are oriented.

Netanyahu has accused Bennett and Lapid of showing weakness by not more robustly opposing the Biden administration’s efforts to reenter the 2015 Iran nuclear deal, which former President Donald Trump left in 2018 at Netanyahu’s behest.

Bennett and Lapid’s strategy appeared to pay dividends during Lapid’s 48 hours in the U.S. capital this week. The Biden administration, frustrated with the new hard-line Iranian government elected this summer, is edging closer to Israel’s posture, a development that came about without tensions.

Blinken’s language on Iran was tougher than it has been since President Joe Biden made good on his pledge to seek to reenter the 2015 sanctions relief for nuclear rollback deal, known as the Joint Comprehensive Plan of Action. Biden sees it as the best option to keep Iran from obtaining a nuclear weapon.

“Despite the fact that we’ve made abundantly clear over the last nine months that we are prepared to return to full compliance with the JCPOA if Iran does the same, what we are seeing – or maybe more accurately not seeing from Tehran now – suggests that they’re not,” Blinken said. “I’m not going to put a specific date on it, but with every passing day and Iran’s refusal to engage in good faith, the runway gets short.”

Lapid culled other dividends from his visit. The Biden administration showed itself fully committed to cultivating the Abraham Accords, one of the few areas of agreement it has with the Trump administration, which brokered the accords. Blinken at the press conference announced the launch of two working groups comprising Israeli, U.S. and Emirati officials, one tackling religious intolerance and the other fostering cooperation on water and energy.

Lapid also met with World Bank officials to discuss plans to seek investors for infrastructure projects in the Gaza Strip as a means of lifting the standard of living in the poverty-stricken enclave, while limiting the influence of Hamas, the terrorist group controlling the strip with which Israel periodically wars. The United Arab Emirates would likely also play a role in the investments.

Lapid, who is set to take over as Israel’s prime minister in 2023, met Tuesday with Vice President Kamala Harris, and with Nancy Pelosi, the Democratic speaker of the U.S. House of Representatives. In a brief appearance for reporters, Pelosi emphasized bipartisan support for Israel, a pointed rejection of the calls by progressives within her party to cut funding to the country.

On the U.S. side, Blinken said the Biden administration remains dedicated to reviving the Israeli-Palestinian peace process. Biden, he said at the press conference, has been “clear that a two-state solution is the best way to ensure Israel’s future as a Jewish and democratic state, living in peace alongside a viable, sovereign, and democratic Palestinian state.” Bennett has said that a Palestinian state will not arise on his watch, while Lapid has been less clear on the issue.

Blinken did not refrain from mentioning points of contention, including American plans to reopen a dedicated consulate for Palestinians in Jerusalem, replacing the one shuttered by the Trump administration.

“We’ll be moving forward with the process of opening a consulate as part of deepening those ties with the Palestinians,” Blinken said, although the Israeli government is on the record as opposing it.

State Department statements on the meetings also pointedly said that China was a topic of discussion with Lapid. The Biden administration, like the Trump administration before it, objects to the extent of Israel’s commercial ties with the most formidable rival to the United States in the international arena.

Lapid is set to meet with Jewish organizational leaders in Washington on Thursday before he returns to Israel. He is expected to make the case to them that he wants to repair relations neglected by Netanyahu, who gravitated toward evangelical Christians as a more natural pro-Israel base.