4 cities, 2 states, 1 synagogue campus and rabbi: The Jews of the Illinois-Iowa Quad-Cities are learning to share 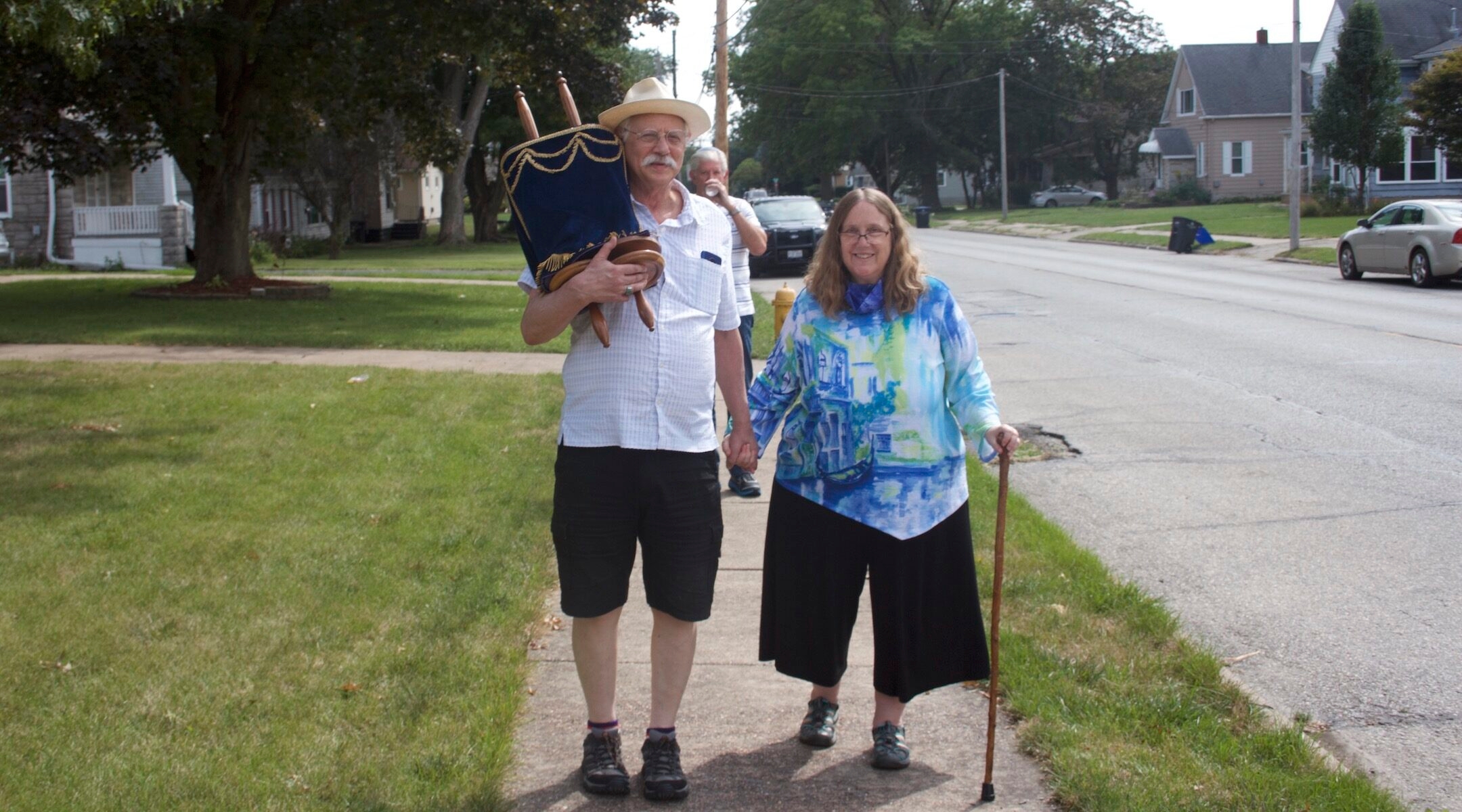 Rabbi Linda Bertenthal (right) and her husband Philip carry their congregation's Torah on its 7.5-mile journey across the Mississippi River, from Rock Island, Illinois, to its new home in Davenport, Iowa. (Beit Shalom Jewish Community)
Advertisement

(JTA) — For one group of Midwestern Jews, the Jewish New Year started this fall with an interstate hike — complete with armloads of Torahs.

Four days before Rosh Hashanah, members of Congregation Beth Israel set off from the Tri-City Jewish Center, in Rock Island, Illinois, carrying one of its Torahs. They walked nearly five miles, crossing the Arsenal Bridge over the Mississippi River, before arriving at the intersection of 12th and Mound streets in Davenport, Iowa.

There, as planned, the Conservative synagogue’s congregants met up with members of Davenport’s Reform congregation, Temple Emanuel. They had walked a half-mile carrying a Torah of their own.

Rabbi Linda Bertenthal, who serves both congregations, led the group in singing “Hineh Ma Tov,” whose lyrics — “How good and pleasant it is, for brothers and sisters to sit together” — fit the occasion. Several dozen men, women and children then hiked another 2 and 1/2 miles to the congregations’ new, shared home in Davenport, the Beit Shalom Jewish Community.

“It was really cool. Everyone took turns carrying their Torahs. We all carried. We all did our part. Everyone was talking and having a good time,” said Greg Rothbardt, who grew up at Temple Emanuel and recently completed a three-year stint as congregation president.

“It was one of the top Jewish experiences of my life,” said Lee Blumberg, president of Beth Israel.

Together, the group carried the Torahs to a one-time steakhouse and real estate office, an 11,000-square foot structure retro-fitted to house congregations that now share a sanctuary, offices, a kitchen and Bertenthal herself — while maintaining separate identities, governing boards and worship practices.

The sharing arrangement between Temple Emanuel and the Jewish Center is, all parties insist, not a merger; in fact, use of the “m” word is strictly eschewed. The two congregations remain independent in their worship practices and governance, even while sharing a building and a rabbi.

It’s a model that acknowledges the reality of a declining Jewish population, a fact of life in many towns and small cities, while also respecting the diverse traditions that gave rise to the contemporary community. The area is not the first community to adopt the arrangement, but with financial pressures exacerbated by the COVID-19 pandemic, others may look to it as a recent model.

The Tri-City Jewish Center was founded in 1936, when Davenport; Rock Island; and Moline, Illinois, were the dominant municipalities in the area. As neighboring Bettendorf, Iowa, grew, the region as a whole adopted the more geographically inclusive name Quad-Cities.

Today 400 to 500 Jews live in the Quad-City area. “Our slow decline in numbers mirrors that of many small Jewish communities throughout the country. Many of our kids go to schools outside the area and get jobs in larger cities. And many of our seniors have moved to warmer climates,” said Allan Ross, who has served as executive director of the local Jewish federation for 20 years. The federation has joined the two congregations as the third occupant of the Beth Israel building.

Currently, Beth Israel and Temple Emanuel each number fewer than 100 households. Chabad Lubavitch of the Quad-Cities, which opened its doors in Bettendorf 16 years ago, draws from unaffiliated Jews, members of the long-established congregations and a small number of local Israelis. It has its own building and is not involved in the collaboration. 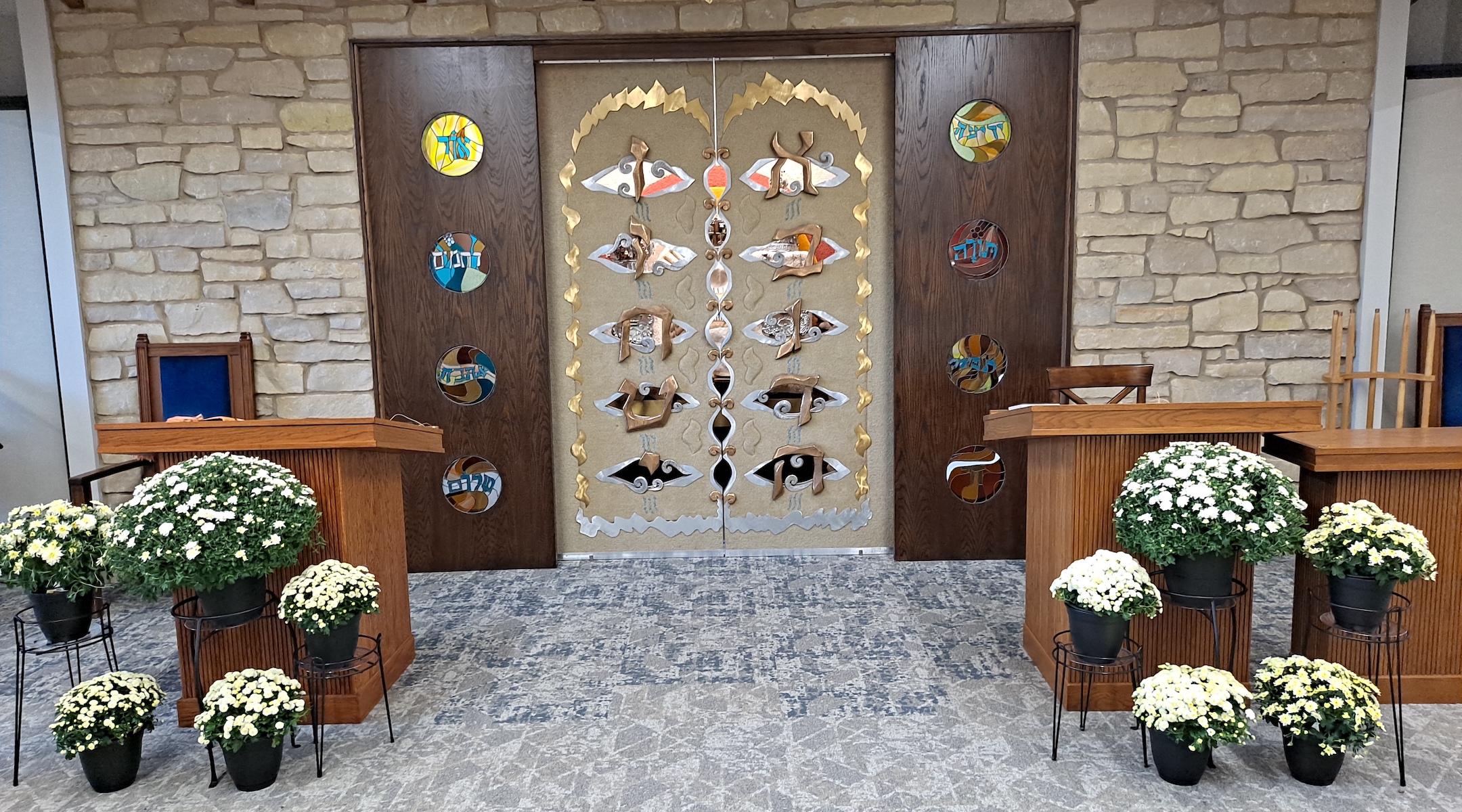 Historians cite German Jewish poet Heinrich Heine as having written in 1823 that “a time would come when Jews would be munching unleavened bread on the banks of the Mississippi.” By 1850, if not earlier, Jewish merchants indeed were putting roots down where the Mississippi River flows east-west, rather than north-south.

Over time, congregations formed, along ethnic lines and worship practices. Some survived. Others did not. Some merged.

The river dividing Illinois and Iowa has also served as a divider between the strands of Judaism. Rabbi Simon Glazer, a leading Orthodox figure of his time, wrote in 1900: “Rock Island is a unique little Jewish community. It is a ghetto in the full meaning of the word. All keep Sabbath. Friday evening puts a holy garb over that part of Rock Island where stands the beautiful little schule.”

Glazer also observed: “It is as hard for a Davenport Jew to be an orthodox as it is for a Rock Island Jew to be a reformer.”

More than a half-century later, Rabbi Oscar Fleishaker, who led the Tri-City Jewish Center from 1946 to 1954, concurred this opinion in his doctoral thesis: “The Jewish families did not care to associate with each other. The Illinois Jews wanted no social ties with the Iowans and when the East Europeans began to arrive, the German Jews simply refused to recognize their existence or presence in the community. Both groups, East Europeans and Germans, existed side by side for more than seventy-five years, yet there was almost no relationship between them.”

That ice began to thaw in the 1940s, and most remnants have long since melted.

Founded in 1936 as a Traditional congregation, the Tri-City Jewish Center, referred to as “the Center” by locals, affiliated for several decades with the United Synagogue of Conservative Judaism. It has since left the organization, but remains Conservative in religious practice.

Just as the references to the Tri-Cities gave way to the Quad-Cities, the Center’s name became something of an identity issue. “Around 2007-2008 we decided as a board that ‘the Tri-City Jewish Center’ sounded more like a JCC than we wanted it to,” said Maynard Siegel, a life-long member and former congregation president.

In recent years, the Center has identified itself as “Congregation Beth Israel at the Tri-City Jewish Center,” taking on the name of an Orthodox congregation that built Rock Island’s first synagogue in 1902 and later merged into the center in 1950.

In Davenport, the Orthodox congregation B’Nai Israel, founded in 1861, joined the Reform movement’s Union of American Hebrew Congregations in 1879 and adopted the name Temple Emanuel in 1886. It remains Iowa’s longest continually-operating Jewish congregation.

The current sharing arrangement began to take shape when the Tri-City Jewish Center recognized that it no longer needed the 30,000-square foot home it moved to in 1981. It sold the building a couple of years ago to the Two Rivers YMCA, which will share the space with the Rock Island Public Library.

About that time, members of the Tri-City Jewish Center community purchased a building in Davenport that they thought might, at some future date, be suitable for a synagogue as the community began to demographically shift across the river. “They bought it as a placeholder,” Siegel said.

The Tri-City Jewish Center had broached the idea of sharing a home in Iowa with Temple Emanuel before, but the sale of its Rock Island property accelerated that conversation. Temple Emanuel’s 13,000-square foot building, which opened in 1953, is now listed for sale.

Even after a dozen years of joint education programs and holiday celebrations, when it came to talking about the sharing arrangement, both parties were wary.

“The fear of the unknown was some of the issue,” Rothbardt said.

Siegel said, “Each tradition was jealously guarded. A fair number of people were very concerned that their traditions not be invaded.”

“It’s always an agonizing process, especially when you bring different cultures of synagogues into the same building and working with each other. Nowhere that I’ve known about has it ever been easy,” Ross said.

The sharing arrangement extends to Beit Shalom’s board, which deals primarily with issues related to the building; it comprises three members from each congregation and two representing the federation (one who attends Beth Israel and the other Temple Emanuel).

Bertenthal is acting as a bridge. Initially hired by Temple Emanuel as an interim rabbi and then full-time, she now is contracted as the “settled rabbi” for both congregations.

Though ordained in the Reform movement — at Hebrew Union College-Jewish Institute of Religion-Los Angeles — Bertenthal is learning Beth Israel’s liturgical and musical traditions. She conducts a Reform service on Friday nights and a Conservative on Saturday mornings. Services similarly alternated throughout the High Holy Days.

Bertenthal said she has found much of the liturgy in common, though there are differences, such as the Musaf service, which is part of Conservative worship, but not Reform. There also are variations in the wording of some prayers and the melodies preferred by Beth Israel congregants. “But they are being very kind and generous in giving me time and space and are appreciative that I am trying to learn their modalities and ways of doing things,” she said.

Blumberg said, “She’s making a very valiant effort and she admits when she doesn’t know things,” adding that Beth Israel congregants, who understand the necessity of sharing a rabbi, fill in the gaps.

When Bertenthal meets with potential congregants in her Judaism class, she recommends that they attend services at both congregations to help determine where they feel more comfortable.

Beit Shalom’s building itself is an exercise in sharing. The doors open to a Tree of Life mosaic on the floor, its trunks representing each of the congregations, and extending onto the walls. The yahrzeit or memorial walls from both congregations have been reinstalled in the foyer, and the ark integrates both the oversized doors and letters representing the Ten Commandments from the Center, as well as stained glass from Temple Emanuel.

Bertenthal credits the leaders of both congregations for “looking with clear vision at the future and seeing that the future is not sustainable if we don’t do something to change the facts on the ground.”

Change has not been easy. “There is so much emotional resonance when it comes to issues of home,” she said. “Both congregations really want to feel at home in this new building and, therefore, what the other congregation does has some impact on them.”

The Torah procession was “one of the helpful transitional moments,” Bertenthal said, acknowledging that for some congregants acceptance will take time. Life cycle events and sharing Shabbat and holidays will play a role. “As we have those experiences, it will come to feel like home,” she said. A few weeks after their Rosh Hashanah blending, both congregations joined to build a sukkah.