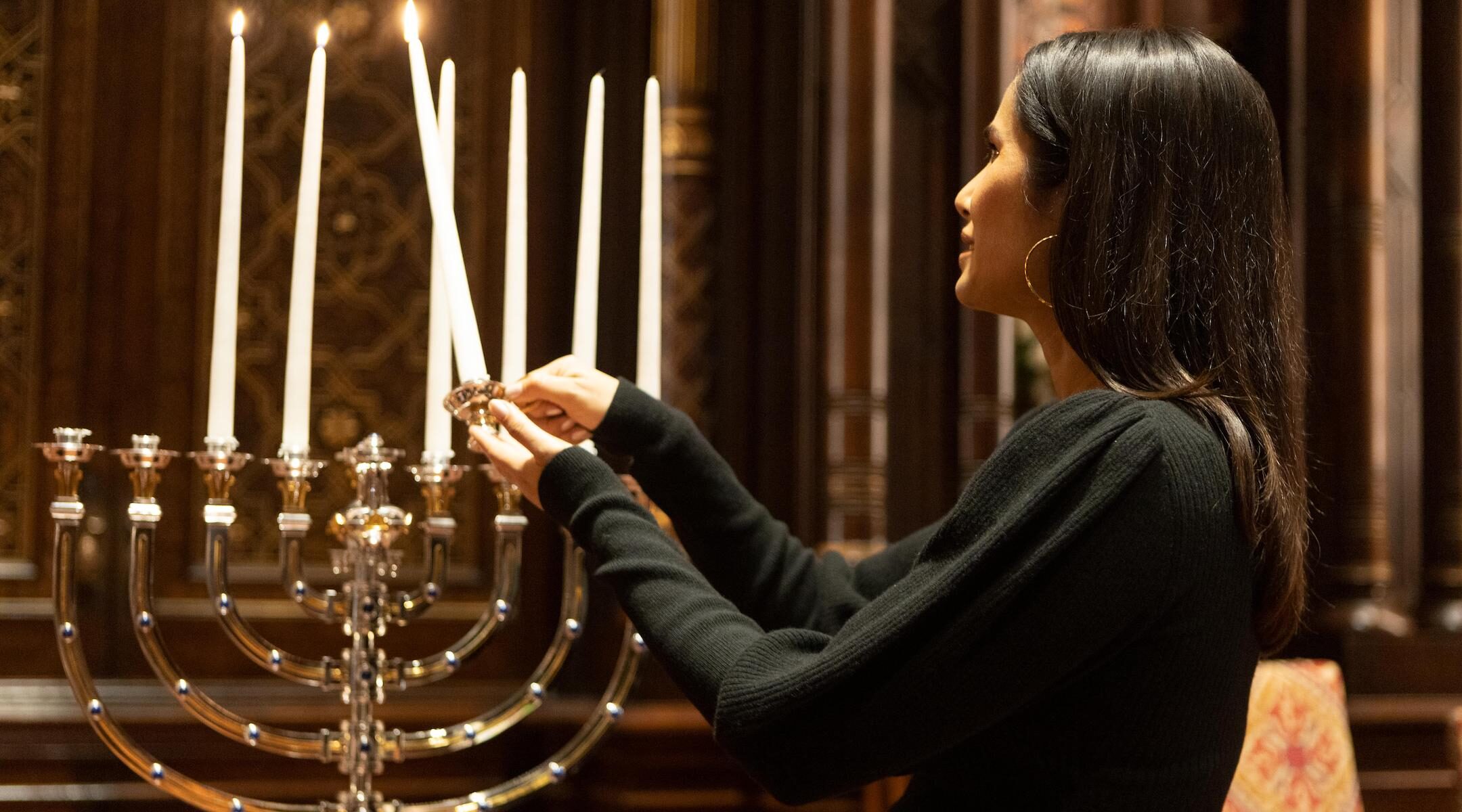 Padma Lakshmi lights a menorah on her visit to New York Central Synagogue during the "Happy Challah Days" episode of her Hulu show, "Taste the Nation." (Craig Blankenhorn/Hulu)
Advertisement

In a special, four-part holiday edition, Lakshmi highlights traditional holiday foods from locations around the U.S.  — she visits Los Angeles to celebrate the Korean New Year, Miami to learn about Cuban Christmas and Cape Cod to learn about food traditions of the Wampanoag Nation, and to deconstruct the holiday narrative of Thanksgiving.

To learn about Hanukkah? Lakshmi only needed to travel around the corner from her East Village apartment. In the episode, titled “Happy Challah Days,” she visits the Lower East Side, where hundreds of thousands of Jews lived after immigrating from Eastern Europe around the turn of the 20th century.

The episode is a New York Jewish food lover’s dream. Lakshmi — the author, model and food mogul who’s been nominated for 11 Emmys for her hosting/judging work on Bravo’s “Top Chef” (her Jewish co-host Gail Simmons has been nominated for two) — makes her first stop at Russ and Daughters appetizing shop on Houston Street, a Lower East Side landmark since 1914. The shop is run by Josh Russ Tupper and Niki Russ Federman, great-grandchildren of the store’s original owner, Joel Russ.

At Russ and Daughters, Lakshmi learns to make latkes and samples many of the store’s signature Ashkenazi offerings: caviar, schmaltz, herring and liver. Lakshmi next visits the Tenement Museum, the Pickle Guys — an Essex Street mainstay since 2010 — and New York’s Central Synagogue, where she discusses the history of Hanukkah with Rabbi Ari Lorge.

After speaking with Ruth Zimbler, a Holocaust survivor, she learns how to make holishkes (stuffed cabbage) with the creators of the artisanal gefilte-fish brand Gefilteria. She also brings her daughter Krishna along to share a brisket and kugel meal with Deb Perelman, the food blogger behind Smitten Kitchen.

The episode tells viewers the Yiddish name for each of the foods Lakshmi tastes, and celebrates the freedom Jewish communities have to practice their religion in America. Throughout, Lakshmi compares the Jewish immigrant and family experience with her own experience immigrating to the U.S. from India as a child.

Lakshmi also takes care to de-emphasize the role Hanukkah has traditionally played in Jewish culture — she knows the holiday is not as religiously important as Rosh Hashanah, Yom Kippur, and even Passover. She tells her non-Jewish audience members that, contrary to popular gentile belief, the holiday is not “Jewish Christmas.”

Instead, Lakshmi uses Hanukkah as a way to explore how Jewish-American culture came to be — its resilience, its community, its assimilation, its struggle, with food at the core of it all. She also explores her own relationship to the oil-drenched foods that play an important symbolic role during Hanukkah.

“Personally,” she said, “I’ve never needed an excuse to eat anything fried.”

The “Taste the Nation” episode, “Happy Challah Days,” is streaming now on Hulu.