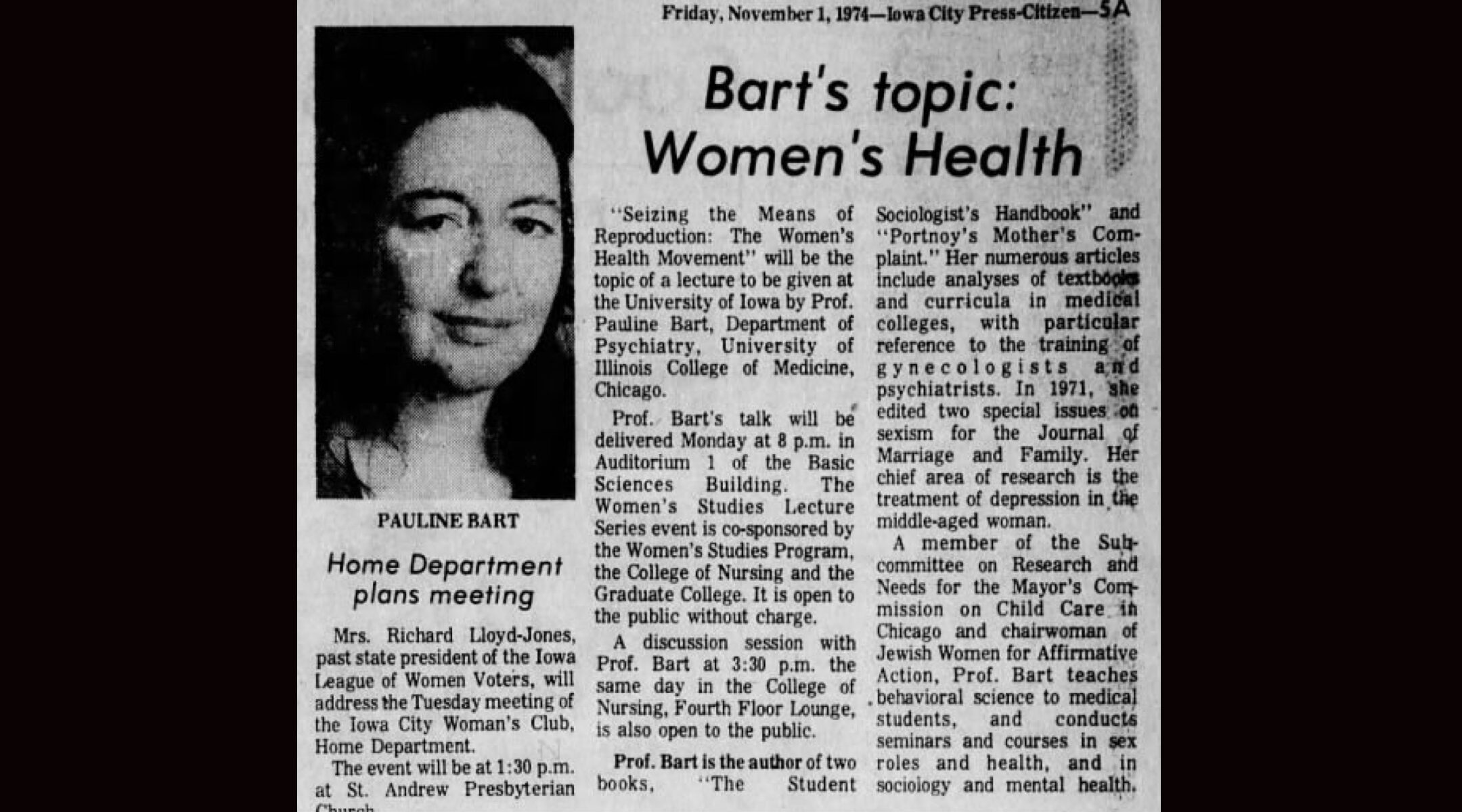 (JTA) — Pauline Bart, a sociologist and professor of women’s studies who studied depression among 1950s Jewish housewives and modeled much of her research on women’s lives on her own experiences, died Oct. 8 at age 91.

Bart’s research, though generally focused on women, was frequently influenced by her Jewishness and often focused on Jewish women in particular. Her graduate thesis, in which she studied depression among Jewish mothers whose children had grown up and moved away from home, was eventually published under the title “Portnoy’s Mother’s Complaint.”

The work, which suggested that Jewish mothers feel an unusually strong attachment to their roles as mothers, was woven through with humor, a trait for which Bart was well known, according to an obituary in The New York Times.

Bart was born in 1930 to a Jewish family in Brooklyn. In elementary school, according to the Times, she wrote an essay with the title “How a Jewish Girl Like Me Could” about how all of the children at her school, including Jewish ones, were forced to since Christmas carols. Bart refused to sing along because the songs were religious.

She earned a doctorate at the University of California, Los Angeles, in 1967, when she was nearly 40. She had already been married and divorced and had two children, who survive her. She immediately embarked on a productive academic career.

“I have always had a ‘Jewish slant’ in my research,” Bart wrote in 1987, responding to a letter to the editor regarding an interview she gave to Lilith, the Jewish feminist magazine, about how Jewish women respond to rape attempts.

In that interview, Bart outlined her research finding that Jewish women are more likely than women of other backgrounds to have rape attempts on them result in completed rapes. She argued that Jewish women’s strength, verbal persuasion, was unhelpful in avoiding rape and that Jewish women lack the “street smarts” required to avert being raped.

Bart had been inspired to study rape after hearing about the experiences of her women’s studies students at the University of Illinois at Chicago. She retired from teaching in 1995 after being accused of referring to a Black student in a racist and sexist manner.

During her teaching career, Bart researched and lectured about abortion access and the ways in which medical professionals were trained to treat issues of women’s health. According to a 1974 article in the Iowa City Press-Citizen, which appeared ahead of a lecture she gave about women’s health, Bart served as the chair of a group called Jewish Women for Affirmative Action in the 1970s. She also advocated for Jewish experiences to be included in multicultural and women’s studies programs, according to the Jewish Women’s Archive.

“American Jewish culture is very different from standard American culture as I can testify from my own experiences,” Bart wrote to a nascent multicultural institute in the early 1980s. “I refuse to let my experiences continue to be erased.”