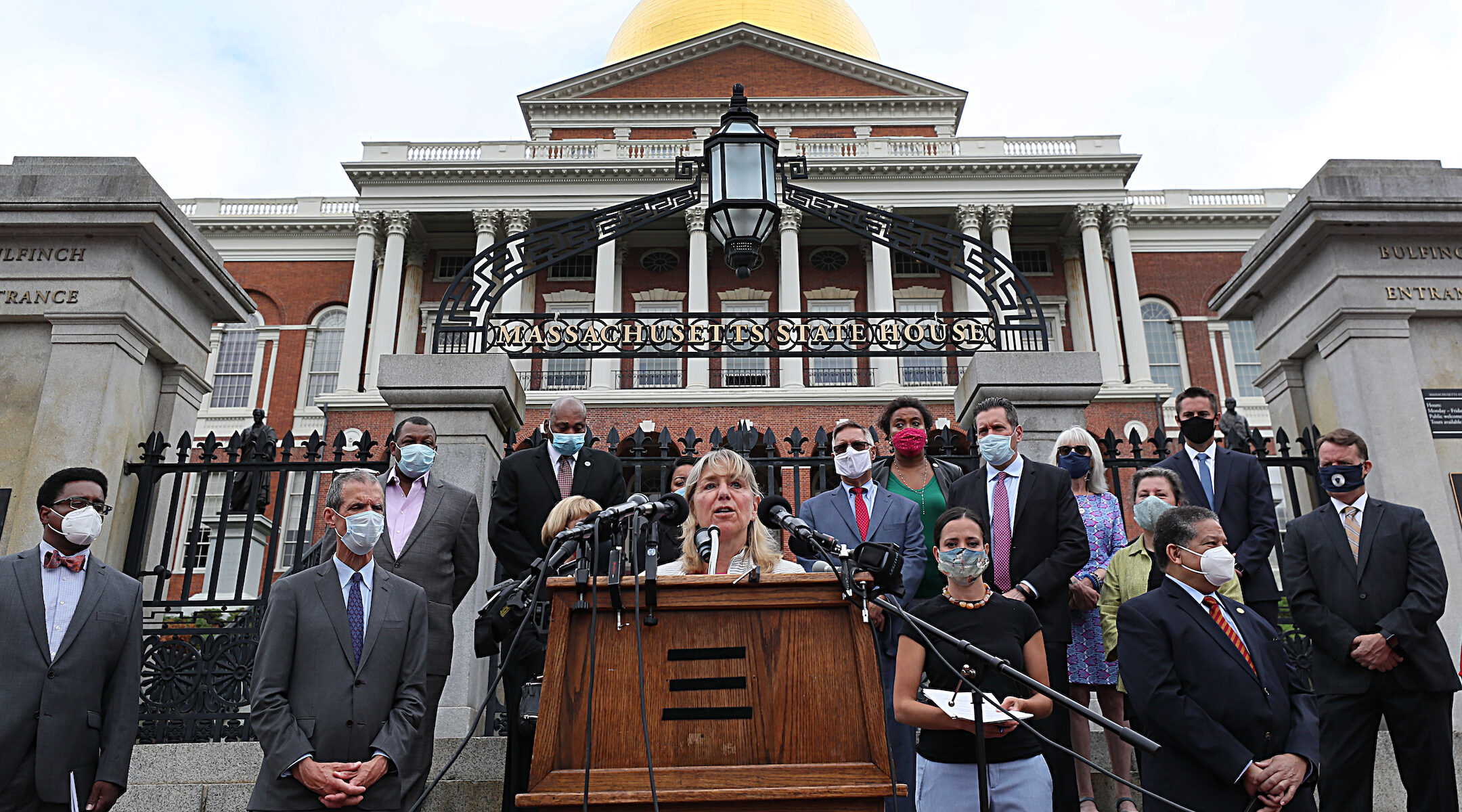 Massachusetts state Senate President Karen E. Spilka speaks on the steps of the State House in Boston on July 6, 2020. Spilka, who is Jewish, backed the Nov. 24, 2021, passage of a bill mandating genocide education in the state. (Suzanne Kreiter/The Boston Globe via Getty Images)
Advertisement

BOSTON (JTA) – Against a backdrop of disturbing revelations of antisemitic incidents, including many in local schools,  Massachusetts lawmakers this week approved a bill that will require genocide education in all public secondary schools.

“An Act Concerning Genocide Education,” which also establishes a public-private trust fund to support curriculum development and training for educators, is now at the desk of Republican Gov. Charlie Baker.

Once signed, Massachusetts would become the 21st state to require some form of Holocaust education in secondary schools, according to the U.S. Holocaust Memorial and Museum. Legislation around Holocaust education has occasionally proven controversial in other states; in the past year, Arizona passed a similar law after much debate over the International Holocaust Remembrance Alliance’s definition of antisemitism, while an effort in Louisiana was mired by partisan swipes around “critical race theory” and ultimately abandoned.

The text of the Massachusetts bill is broader than some of the bills passed in other states: It mandates only the teaching of “genocide,” which it defines as a series of specific acts “committed with the intent to destroy, in whole or in part, a national, ethnic, racial or religious group,” and never mentions the Holocaust directly. As such, its passage is also being celebrated by a coalition of more than 60 groups, many of them non-Jewish, including the Armenian National Committee.

Jewish groups, including the Anti-Defamation League and the Jewish Community Relations Council of Greater Boston, have backed the bill, too, and see its passage as a win for Holocaust education.

“Genocide education affords us a powerful tool in combating hate and antisemitism while honoring the memories of all who suffered in genocide,” Robert Trestan, the New England regional director of the ADL, said in a joint statement with the JCRC.

“As stewards of the New England Holocaust Memorial, JCRC honors the sacred obligation to lift up the experiences of those who survived the Holocaust in our own Greater Boston community, using their stories as a lesson to future generations about the consequences of unchecked hatred and intolerance,” said Jeremy Burton, JCRC’s executive director.

The law requires each school district to file a description each year of its plans for genocide education. The Genocide Education Trust Fund, the public-private trust established by the law, will support training and resources for educators; its coffers will come from the state, private donations and fines imposed for hate crimes or civil rights violations.

The bill was long in the making, with similar proposals filed in prior legislative sessions. Trestan told the Jewish Telegraphic Agency that the bill is especially compelling at a time when grim reminders about the enduring prevalence of antisemitism in schools and school sports have surfaced.

In Massachusetts, several recent news stories have shed light on disturbing patterns of antisemitism. A Chabad rabbi was stabbed outside of a Boston Jewish day school this summer; his assailant has been charged with a hate crime. In Duxbury, a suburb south of Boston, an investigation found that a high school football team used antisemitic and Jewish terms, including “Auschwitz” and “rabbi,” to call plays during practices and games; the coach was subsequently fired.

More recently, in Danvers, north of Boston, a high school varsity hockey player accused teammates of racist and homophobic hazing and spreading a joke about Jews being killed in the Holocaust in a group chat. A week later, swastikas were found painted in the middle school.

“We have seen signs that these incidents are institutional” and have been going on for years, Trestan told JTA.  “This law is designed to help with long-term, institutional change.”

Democratic Rep. Alice Peisch, a lead sponsor of the Massachusetts House bill, said she was motivated by concern that knowledge of the history of genocide is waning.

“This bill will ensure that the Commonwealth’s students are educated about genocides, making them more aware of behaviors and practices that can lead to it so that the past is not repeated,” Peisch said last week when the House passed the law.

“As a Jewish woman and the daughter of a World War II veteran who saw the horrors of a concentration camp firsthand, I believe it is our responsibility to ensure we educate our children on the many instances of genocide throughout history so that they can learn why it is so important that this history is not repeated,” she said in a statement posted on Twitter.

Passage of the bill is a hopeful sign, Trestan said.

“This gives us all optimism,” he said. “It’s an investment in the state’s future leaders.”