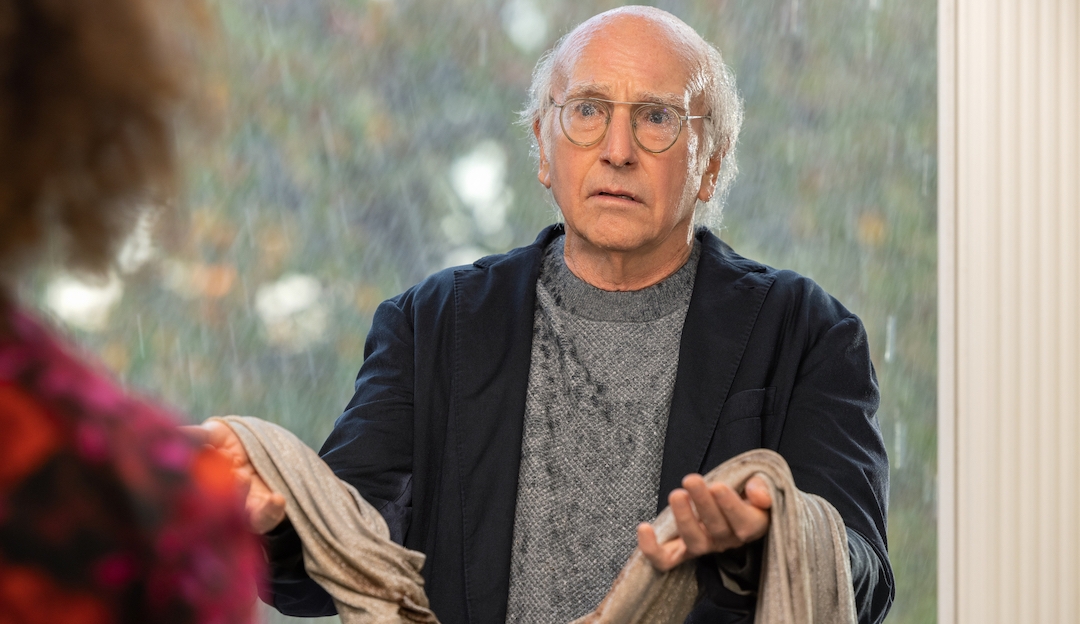 In a recent episode of the 11th season of "Curb Your Enthusiasm," Larry David feels obligated to clean a Klansman's robe. (John P. Johnson/HBO)
Advertisement

(JTA) — “Curb Your Enthusiasm” has always been a Jewy show, but this season it is downright Jewish.

On the HBO sitcom, now in its 11th season, Larry David has never been shy about surfacing, and lampooning, Judaism and Jewishness. He has contemplated the dilemmas of Holocaust survival, waded into the Israeli-Palestinian conflict (via a local chicken restaurant) and gotten stranded on a ski lift with an Orthodox Jew on Shabbat.

This season, it’s not just the occasional matzoh ball  joke, or the Yiddish lesson he gave Jon Hamm in the season premiere. David is plunging into questions of Jewish pride and belief, and if he isn’t exactly Abraham Joshua Heschel, he could provide a Jewish educator with a semester of lively classroom debate.

In the latest episode, for example, a Jew for Jesus joins the cast of the show that Larry’s character is developing for Hulu. Although neither Larry nor his Jewish friends are remotely religious, they seem genuinely upset by the actor’s apostasy, and Larry gives him a rather sober warning that he shouldn’t proselytize on set.

A week earlier, a member of his golf club (played by Rob Morrow) asks Larry to pray for his ailing father. Larry declines, saying prayer is useless. He also wonders why God would need, or heed, the prayer of a random atheist like himself instead of the distressed son who wants his father to live.

For anyone who has gone to Hebrew school, it’s a familiar challenge, usually aired by the wiseacre in the back row who the teacher suspects is perhaps the most engaged student in the classroom. And it is not just atheists posing the question, “Why pray?” The Israeli philosopher Yeshayahu Leibowitz, a devout Orthodox Jew, believed that “worship of God must be totally devoid of instrumental considerations.”

In addition to a Jewish funeral, the episode has a bonus theological theme: “Middah k’neged Middah,” or as Morrow’s character puts it, “what goes around comes around.” Morrow warns Larry that his actions will have consequences, which actually gives Larry pause. If anything, the entire “Curb” enterprise is an exercise in Jewish karma. Larry is constantly being punished in ways large and small for his actions, inactions, meddling and slights. As the old theater expression has it, if Larry opens a donut shop to drive a rival out of business in act one, his own shop will burn to the ground in act three.

A prior episode was even more self-consciously Jewish: Larry attends High Holiday services only because he lost a golf bet to the rabbi, and he literally bumps into a Klansman coming out of a coffee shop. The latter sets off a string of plot twists, as he and the KKK guy trade a series of favors and obligations that will have disastrous consequences for both. Larry’s salvation comes at the end, when he blares a shofar from his balcony, literally raising the alarm on antisemitism and waking his neighbors to the threat of white supremacy.

The episode suggests the failure of good intentions. Larry spills coffee on the Klansman’s robe and offers to have it dry-cleaned. Good liberal Jew that he is, Larry appears genuine in his belief that empathy is a better response to hate than confrontation, and that if he turns the other cheek it might lower the temperature in a post-Trump America. Of course, it doesn’t work out that way, and the last word goes to his friend Susie Green, who performs a pointed act of Jewish sabotage that gets the Klansman pummeled by his fellow racists. Give David credit for embedding within a preposterous half-hour of television a debate about vengeance and resistance that engaged the followers of Jews as different as Jesus and Jabotinsky.

Make no mistake: The Larry David character is sacrilegious and heretical, and “Curb” is no friend of the religious mindset. But to dismiss him as “self-hating” is to miss out on the unmistakably  Jewish conversation at the heart of the show. David’s character is a deeply principled person: Most of the nonsense he gets himself into is the result of his enforcing unspoken social rules that others appear to be flouting, whether it is taking too many samples at the ice cream counter or dominating the conversation (poorly) at the dinner table. Larry is rude and inconsiderate, but he is seldom wrong. He is what Rabbi Joseph Soloveitchik might have called a “Halachic Man” — an actualizer of “the ideals of justice and righteousness,” even when the rest of the world resents it.

If you think I am overdoing it, remember that there is an actual discussion in Talmud about the right and wrong way of putting on a pair of shoes.

And just as in the Talmud, there are no easy answers in David’s moral universe: If a friend lends you his favorite, one-of-a-kind shirt, and you ruin it, what are your obligations to him? (See: Bava Metzia 96b) If a thief breaks into your house and then drowns in your swimming pool, which wasn’t protected by the required fence, who is owed damages and how much? (See: Ibn Ezra on Exodus 22:1-2)

In last week’s episode, Larry even touched on — consciously or not — a classic debate in the Talmud: If you and a friend are stranded in the desert, and your canteen has only enough water for one of you to survive, must you share it or save your own life?

Yes, Larry was talking about sharing a phone charger, but if the Sages had cell phones, what do you think they’d be talking about?