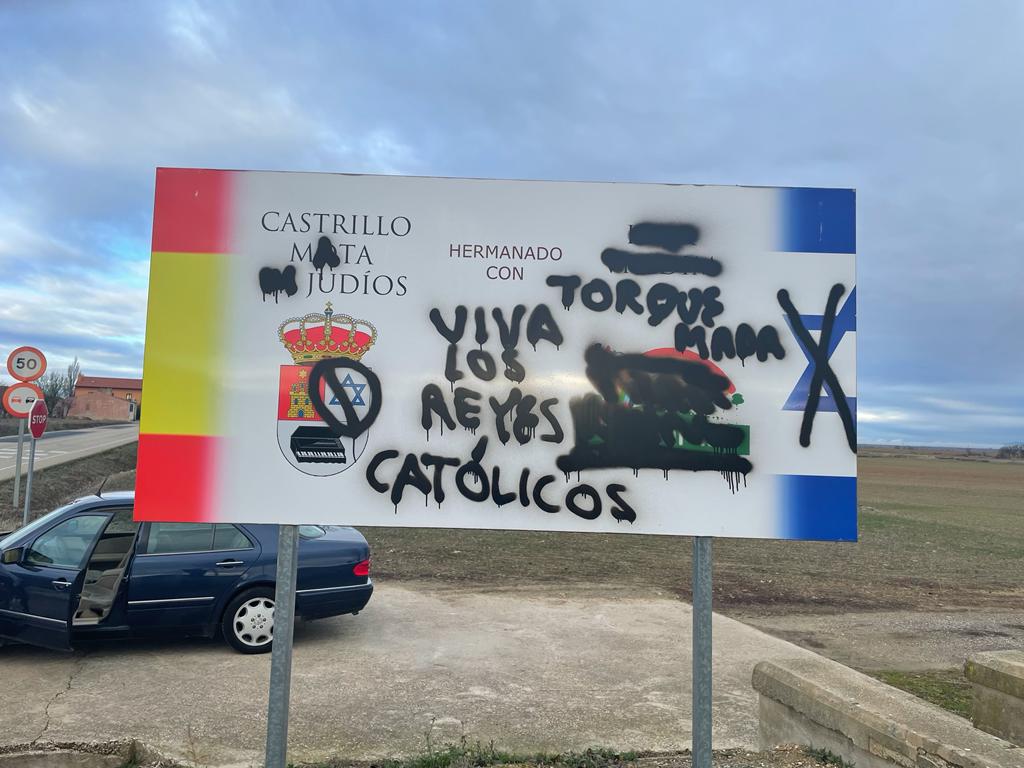 A sign in Castilla Mota de Judios was defaced with graffiti restoring the town's name from 1627 to 2015, which translates to Fort Kill the Jews. (Courtesy Lorenzo Gutierrez)
Advertisement

MADRID (JTA) — A tiny Spanish town that has veered over the centuries from being a refuge for Jews to a rallying cry for their death was defaced with widespread antisemitic graffiti.

Residents of Castrillo Mota de Judíos, a village in Northern Spain, began to discover the graffiti almost as soon as they woke Monday.

They ultimately found vandalism in four locations: on the entrance to the town hall, the signpost on the road entering the village, the planned site for the future Sephardic center and the sign commemorating the town’s sisterhood with the Israeli city of Kfar Vradim.

No Jews live in the town, which has only about 50 inhabitants. The vandals were instead taking aim at the village’s history, and the efforts by its current mayor, Lorenzo Rodriguez, to preserve it.

Originally named Castrillo Motajudíos, or Jew’s Hill Fort, in 1035 when Jews fleeing from a neighboring pogrom settled there, the town was renamed Castrillo Matajudíos — Fort Kill The Jews — in 1627, during a period of extreme religious persecution by the Inquisition.

It wasn’t until June 2015 that the town’s name was restored to Castrillo Mota de Judíos — following a referendum initiated by Rodríguez. Since then, he has worked to restore the town’s Jewish past. His most recent project is the construction of the Center of Jewish Memory of Castilla y León, which is expected to open in 2022 along the Camino de Santiago, a pilgrimage route undertaken annually by hundreds of thousands of Christians.

Some of the graffiti this week amended signs in the town to the old name. One scrawling praised Torquemada, the infamous first leader of the Inquisition, which tortured, killed and expelled Jews living in Spain. “Long live Catholic kings,” one sign said.

Rodriguez revealed the vandalism in a series of tweets Monday in which he condemned the people who committed it.

“These are cowardly, intolerant and ignorant people who do not value neither heritage nor people; nor do they have respect for anyone or anything,” he wrote. “These intolerant people are not allowed here.”

The Federation of Jewish Communities of Spain also condemned the vandalism.

“These attacks and threats against the Mayor, Lorenzo Rodriguez, are unacceptable and reveal the danger of the ideologies that led Europe to the disaster,” the group said in a statement. “We strongly stand by the Mayor of Castrillo Mota de Judíos and encourage him to continue working for the recovery of the [village] Jewish past and in peaceful and tolerant coexistence.”

Rodriguez said he would not be deterred. He filed a complaint with the Spanish police on Tuesday morning, then tweeted a statement of defiance.

“We continue forward in the task of recovering our past, our culture and our identity,” he wrote. “What happened in Castrillo is an example of the cowardice of some individuals and groups who use violence to show their complete lack of knowledge and with the only goal of causing harm.”