A basketball legend from Holy Cross is Jewish. Now a mezuzah hangs in the school in her honor. 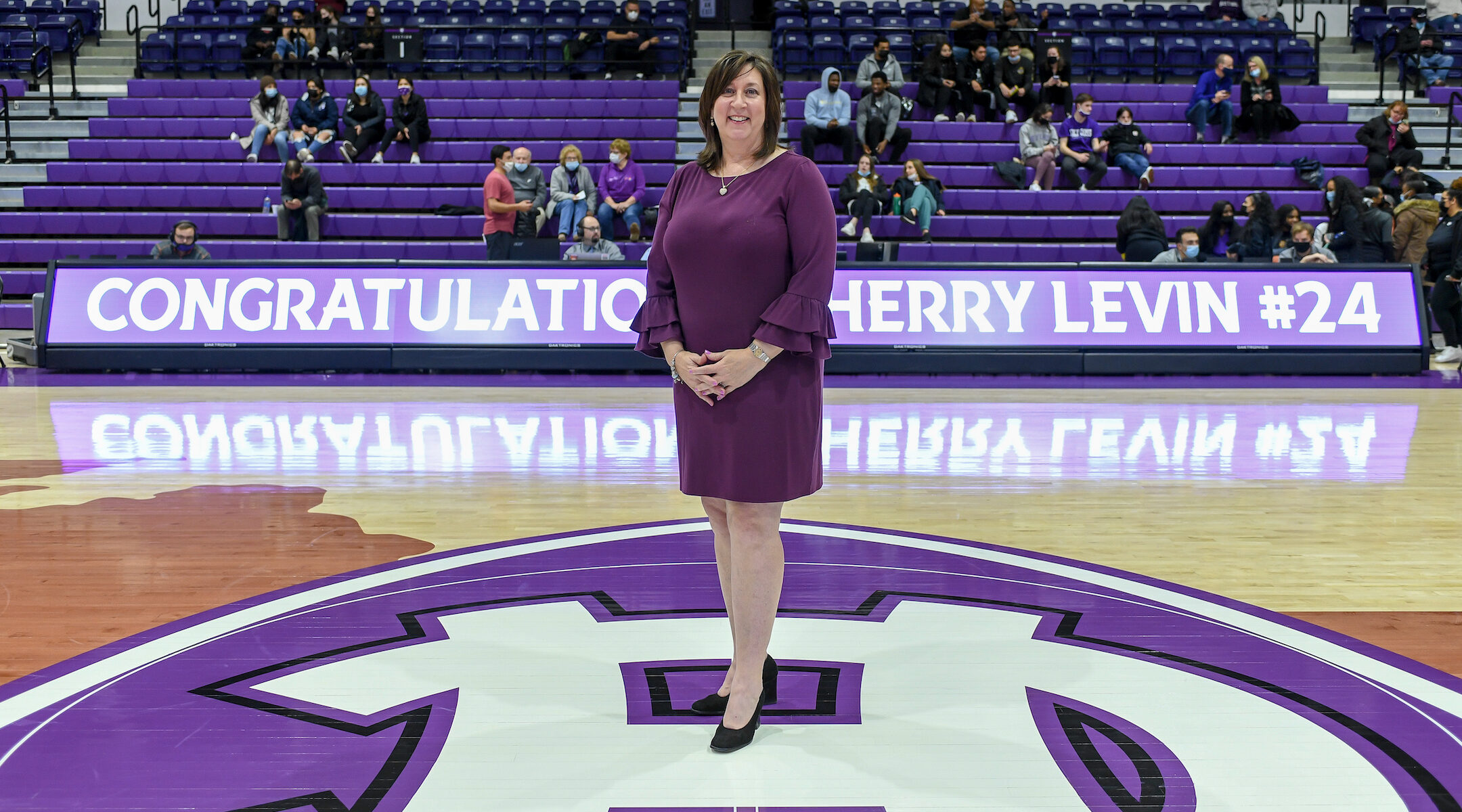 The theme of her pregame pep talk? The shamash.

“The shamash candle doesn’t lose any of its brightness by lighting all the rest,” Levin told the Jewish Telegraphic Agency. “I was like, you know what, that’s kind of like what a team is. We have all these talented players, who, just because another teammate scores 20, doesn’t make you less of a player. We have to be all together as a team.”

None of Levin’s players are Jewish. But she’s used to that — as a player herself, Levin was the all-time leading scorer in the women’s basketball program at her alma mater: The College of the Holy Cross, a Jesuit school in Worcester, Massachusetts.

Levin knows her path is an unusual one. “Yup, Jesuit school,” she said. “Nice Jewish girl goes to a Jesuit school.” It’s always the first question she is asked when she speaks to synagogue groups, and yes, Jewish journalists.

Nearly 40 years later, Levin still holds the Holy Cross program record for points (2,253), points per game (21.8), field goals made (842) and free throws made (569). The Crusaders went an impressive 45-1 at home during Levin’s college career, and she was inducted into the Holy Cross Hall of Fame during her first year of eligibility. 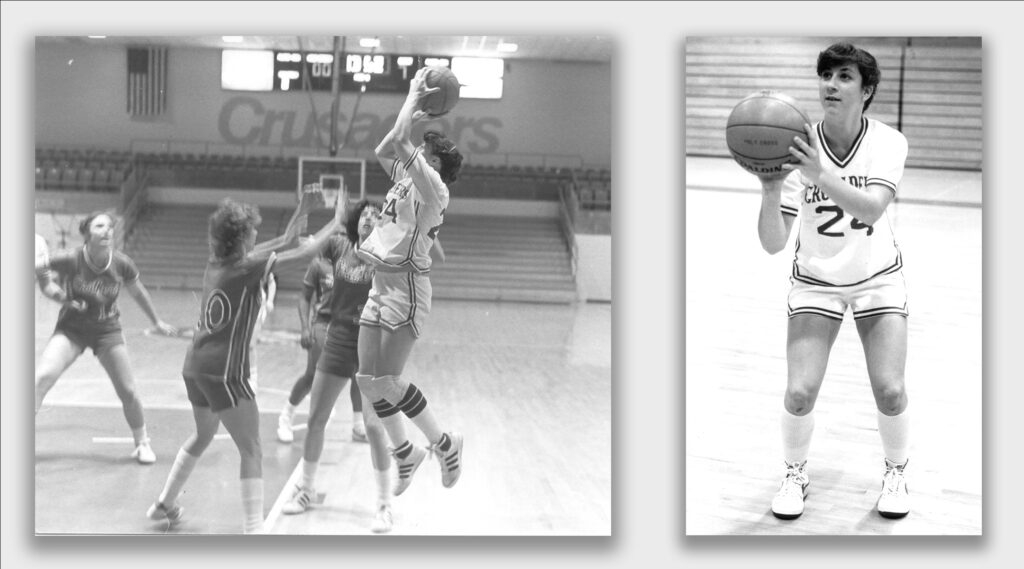 Levin was also named to the Jewish All-American First Team from 1981 through 1984. And she did it all without a three-point line, and while playing roughly 30 fewer games than today’s teams.

Levin had offers to play at Boston College and Boston University, and was being scouted by Harvard and Dartmouth, but chose Holy Cross because of the program’s coach, former Holy Cross legend and Boston Celtics player Togo Palazzi. It didn’t hurt that Levin secured a full scholarship — making her the first woman athlete in Holy Cross history to receive one.

While Levin connected immediately with Holy Cross and with Palazzi, there was one minor hurdle for her to overcome: the whole religion thing. Naturally, she consulted her rabbi.

He reassured her that as long as she had “belief in your heart and your soul that no matter how many people you’re surrounded by who are not [Jewish], you are strong in your faith,” then all would work out, Levin recounted.

“I always felt that,” Levin said. “I was one in an environment of many, but I never felt excluded. I always felt respected.”

Aside from Holy Cross, Levin’s other lifelong affiliation is with Maccabi USA, the volunteer organization behind America’s participation in the international Maccabiah Games, often known as the Jewish Olympics.

Levin’s Maccabi journey actually began in the stands, during a tournament in Kansas City in 1979, her senior year of high school.

A woman named Estelle Goldstein approached Levin’s parents and asked if they were Jewish. When they apprehensively said yes, Goldstein explained that she was involved with Maccabi USA — and they were putting together a women’s basketball team for the 1981 Maccabiah Games.

“That was really the beginning of my love affair with the Maccabiah,” said Levin. “There was something that drew me to the love of our homeland.”

Levin briefly worked for Maccabi USA, with a focus on communications. Then some years later, after the birth of her daughter and a stint in broadcasting, Levin returned to Maccabi as a coach.

She coached the USA women’s basketball team to a gold medal at the 2011 Pan American Maccabi Games in São Paulo, Brazil. That experience relit the spark.

Levin went on to coach in the Maccabiah Games in 2013 and 2017, as well as the 2019 European Maccabi Games. Her teams have won numerous gold medals.

Levin will return to Israel in July 2022 for the 21st Maccabiah Games, which were postponed in 2021 due to the pandemic.

“There’s something really unique and special about the Maccabiah Games,” she said. “It’s not just a sporting event, it’s not just a cultural trip. You are meeting Jews from all [over] the world. You’re competing against, you’re connecting with, you’re seeing the country in a different lens. It really is just an extraordinary, intense, beautiful, wonderful experience.”

When she’s not coaching abroad, Levin is in her 13th year (over two stints) as the girl’s basketball coach at Worcester Academy. She is approaching 400 career wins as a coach, but her purpose remains constant: to have a positive impact on her student-athletes.

“I think there’s always something left, because as I still coach, my goal of coaching is to help kids realize their dreams,” said Levin. “No matter who I’m coaching, that’s always a goal of mine.”

Levin has had an impact — just ask her Holy Cross classmates.

Last month, Levin was recognized by her alma mater, where the women’s basketball team lounge is now dedicated in her honor. There were even a couple of unexpected twists.

The ceremony was organized by a classmate of hers from the Class of 1984. When he called Levin to explain the school’s plans, he asked if she would like a rabbi to be present in addition to a priest.

“I was taken aback,” said Levin. “I said I would love that, that is so special.”

The surprises didn’t end there.

“And then there was a pause,” Levin continued. “And he said, ‘And would you like us to have a mezuzah put on the door?’ And at that point I got a little emotional, because they thought of this. In my mind, I was a Jewish student at Holy Cross, so I was in their world, and I was in their space. And that was fine for me… But they took it to a point that was never expected, but so welcomed.” 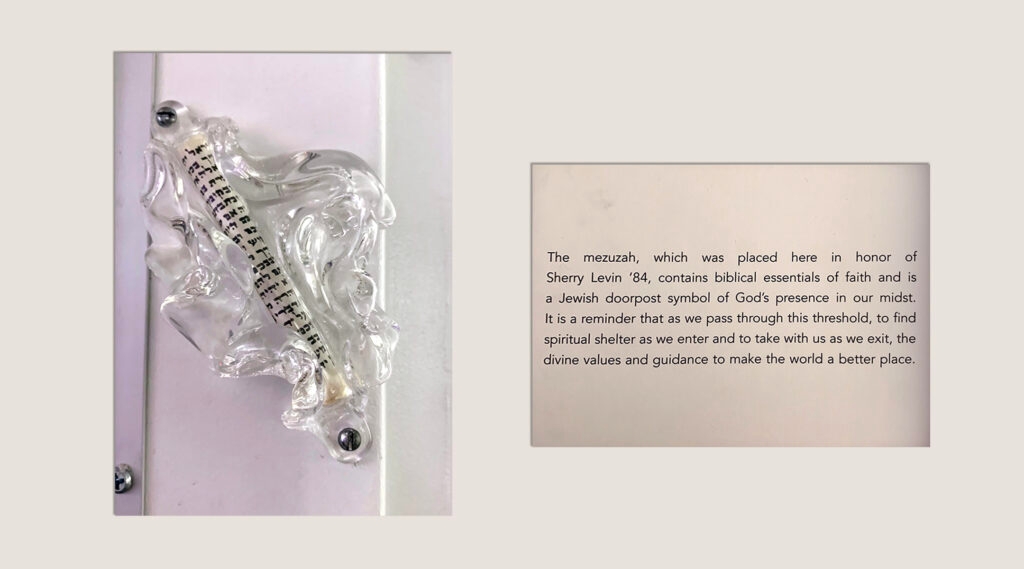 Nearly 40 years after Holy Cross’ most decorated women’s basketball player graduated, a mezuzah now graces the entrance to the team lounge dedicated in her honor.

“It just was a day of love and recognition and kindness and reminiscing, and it was just so special to have and feel that love, for something that I accomplished many years ago, but that has withstood all these years,” said Levin.