The Israel Film Archive collects more than a century of Israeli historical footage online. Here are the highlights. 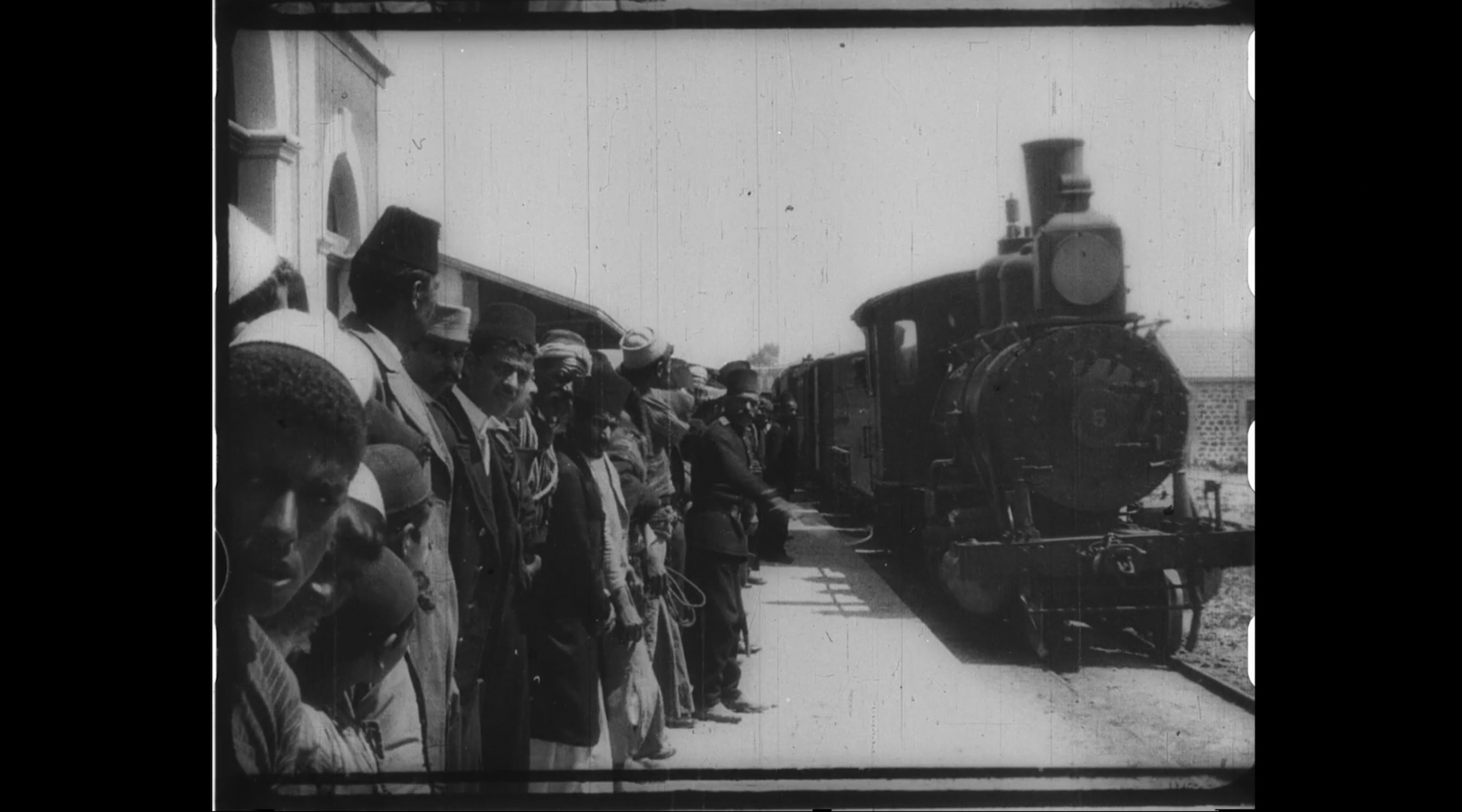 TEL AVIV (JTA) – For years, only those with special permission could visit the climate-controlled repositories of the Jerusalem Cinematheque to see the moving pictures held in the Israel Film Archive. But following a massive digitization effort, anyone with an internet connection can now watch the footage.

“We’re at the fun part where we can share this treasure with the public,” says Noa Regev, director of the Jerusalem Cinematheque. Following a $10 million project that began in 2015 to preserve, restore and digitize its audiovisual collection, the archive can now be streamed via a website that launched in Hebrew in late 2020 and added English-language subtitles in October.

Divided into two sections, the website includes a paid on-demand category, “The Artistic View,” containing 300 Israeli feature films, and a free “Historical View” area with digitized versions of rare films; every newsreel created in Israel from 1927 through 1972; home movies; and family collections.

Don't miss Jewish stories from around the world. Subscribe to JTA's newsletter.

“The Historical View” exposes, in mostly black-and-white film with scratchy patina, the life of the region across elections and wars, tree plantings and commercials for 1920s beauty salons. There are also full versions of historic footage you may have seen as blips in documentaries, like the Declaration of the State of Israel.

There’s much to see on the platform, which is searchable by decade, keyword and location, with more selections on the way. Only around 30% of the archive’s celluloid and video materials have been digitized so far; Regev estimates that within five years the full archive will be available. “People keep discovering more materials,” she adds, hedging that as the archive constantly grows it may never be fully available online. “The most fascinating materials are the ones brought down from someone’s boydem [Yiddish for ‘attic’], both in Israel and abroad.”

Below is a shortlist of some of the materials you can see now, spanning the late 19th century to the 20th.

Filmed by a representative of the French filmmaking pioneers the Lumière brothers just a year after they invented their groundbreaking Cinématographe device, this nine-minute clip – the earliest video footage of the region – opens with a train pulling into the Jaffa station in 1896. The fez-donning crowd can’t decide where to look: the locomotive they have been expecting from Jerusalem (which only comes once daily), or the strange contraption being operated by a foreigner. As this reel pans across Jaffa, Bethlehem and Jerusalem, it shows the bygone vendors, mustaches and camels of 130 years ago.

Not to be outdone by his French colleagues, American inventor Thomas Edison dispatched cameraman Alfred C. Abadie to the region a few years later, in 1903, with a Kinetograph. Abadie captures a main drag in Jaffa and Jerusalem’s unnamed “busiest street.” Five men with interlocked arms are at the center of Abadie’s lens during a section introduced by an intertitle card that reads “Jewish Dance at Jerusalem,” hopping to music we can’t hear in the mute clip. 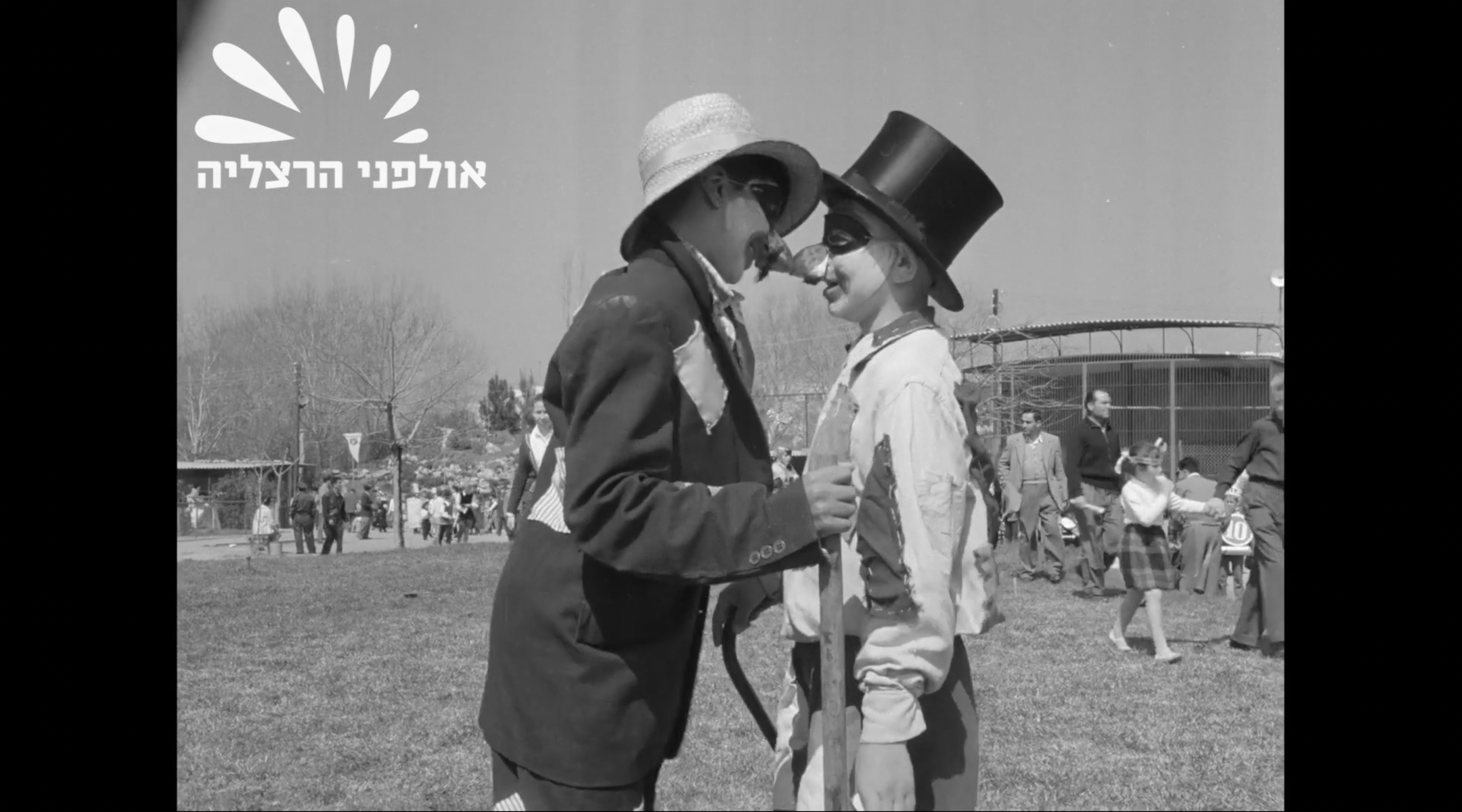 The archive holds charming footage of both Purim and the storied Tel Aviv Zoo (which used to be in the center of the city near present-day Rabin Square), and they coincide in this 1959 short of costumed celebrations among leopard cages. This was back when Purim costumes were handmade originals, and here we see a child wearing a feathery chicken get-up standing comically close to pelicans of roughly the same height, while brothers dressed like explorers drag around a faux hot air balloon. This iteration of the zoo looks leagues ahead of its grassroots 1930s version, located in Rabbi Mordechai Shorenstein’s backyard (as immortalized in this 1935 clip). 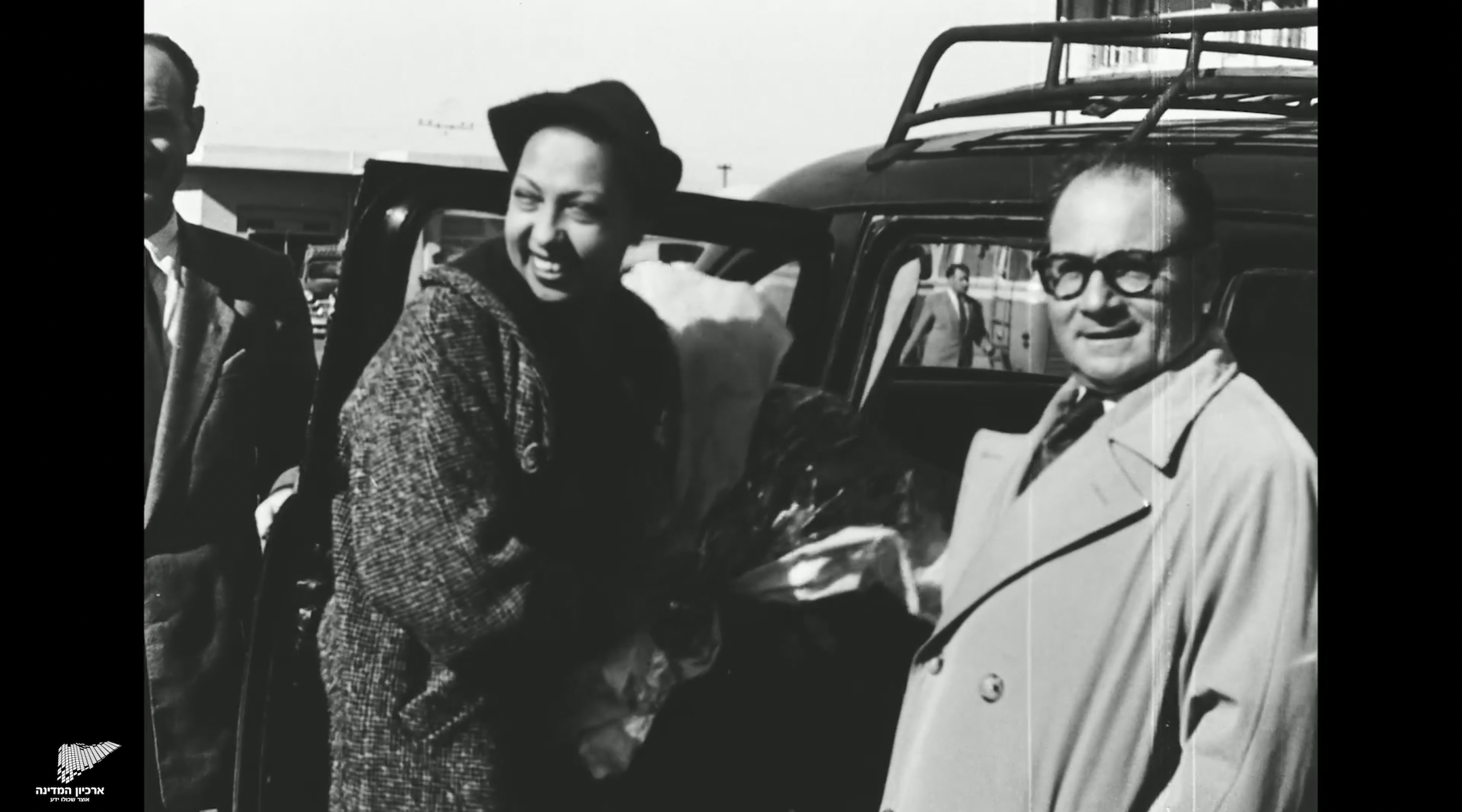 Josephine Baker visits Israel in 1954 in footage available in the Israel Film Archive. (Screenshot via the Israeli Film Archive and the Jerusalem Cinematheque, Israel state archives)

American stars of stage and screen visited Israel throughout the 1950s and 60s, with their ceremonial landings at Lod airport recorded in newsreels. Josephine Baker, the US-born cabaret singer and activist who made her home in France, flew El Al in 1954 to perform several shows (and tried, unsuccessfully, to adopt an Israeli child). When “White Christmas” actor Danny Kaye made a surprise visit a few years later, in 1961, he spent most of his time on the Caesarea golf course. The following year Frank Sinatra arrived by private jet to give seven performances whose proceeds benefited a Jewish-Arab youth center in Nazareth. And when Kirk Douglas visited in 1964, he met with Israel’s third Prime Minister, Levi Eshkol.

The most moving of these paparazzi clips is the one of Sammy Davis Jr., who came for a one-day visit in 1969 and asked to be driven straight from the airport to the Western Wall, where he wedged a handwritten wish between ancient stones.

Ancient stones are a recurring theme in the archive, including a Hasmonean Period burial cave found accidentally in 1956 when foundations were being prepared for an apartment building on Jerusalem’s Alfasi Street. In another clip, aerial footage records the excavations atop Masada, led in 1963 by archaeologist and politician Yigael Yadin. The rededication of the ancient Roman amphitheater in Caesarea in 1961 — after a 1,700-year hiatus — was filmed to record the host of international musicians brought to re-inaugurate the space, including cellist Pablo Casals, who played on a humble stage amid ruins.

On the other hand, some clips aren’t weighted with the gravitas of ancient history, Biblical empires or storied battles — they’re just funny. This reel showing shoppers shamelessly poking pickled fish and splaying the limbs of butchered chickens in Tel Aviv’s open-air Carmel Market is one of them. Only women are shopping in the clip, and they want to make sure they are selecting the absolute best fill-in-the-blank. So what if their hands and noses touch half a dozen cream-filled pastries they didn’t end up buying?

When not prodding things in person at the market, Israeli shoppers trusted television ads to tell them what was good. Regev says the archive’s vintage commercials are an underexplored gem, such as this one by Israeli manufacturer Osem encouraging mothers to feed their toddlers a broth of bouillon cubes and boiling water. (It must have made an impression — the soup powder is a staple of Israeli households to this day.) The Israeli landscape features in other ads, like the Caesarea beach in a 1964 Gottex swimwear commercial, and a road trip to Rosh Hanikra as the premise for an ad for fuel-efficient Heinkel scooters.