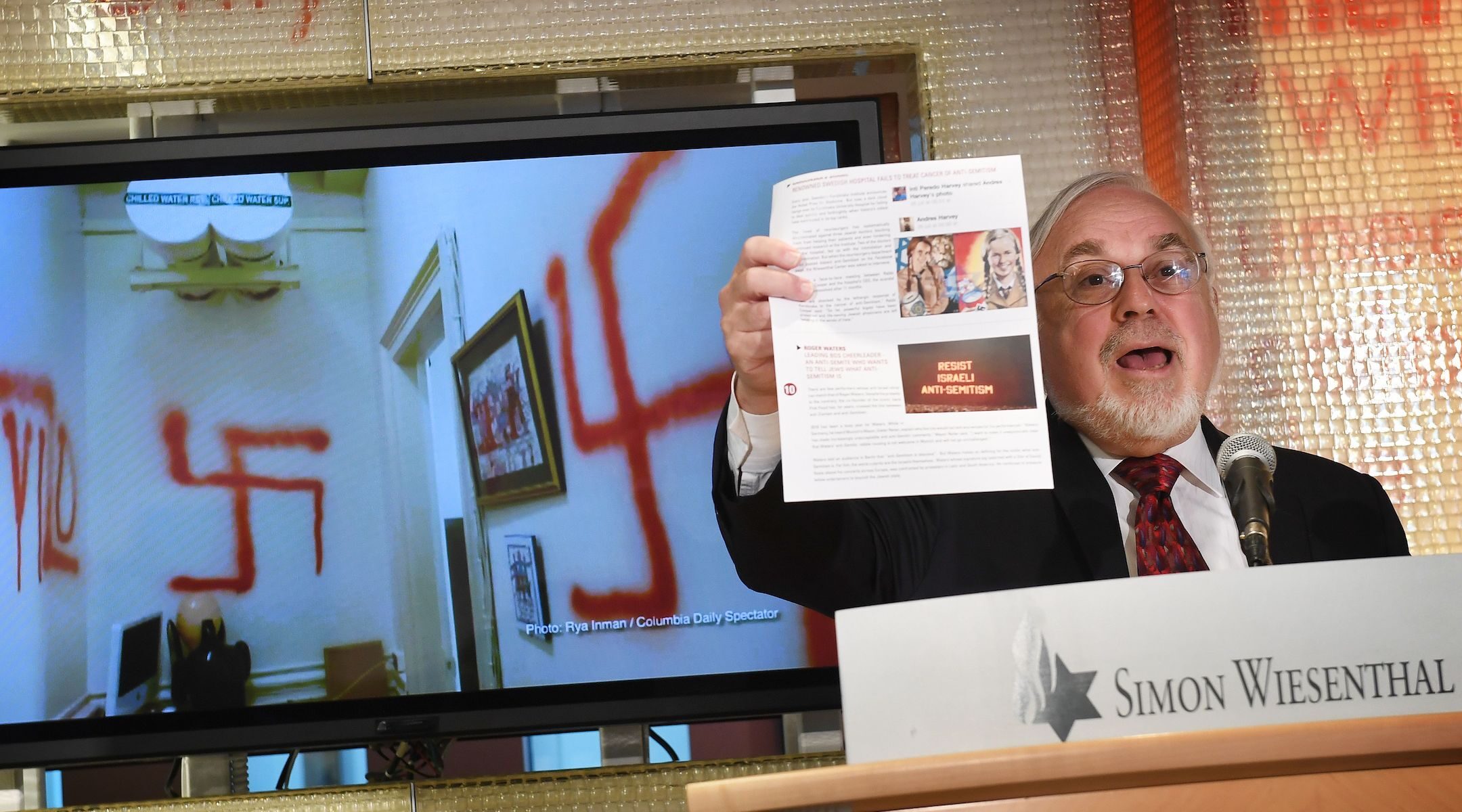 Rabbi Abraham Cooper of the Simon Wiesenthal Center presents on the center's 2018 list of global antisemitism incidents at the Museum of Tolerance in Los Angeles, Dec. 27, 2018. (Mark Ralston/AFP via Getty Images)
Advertisement

(JTA) – The Simon Wiesenthal Center, named for the famed Nazi hunter who died in 2005, defines itself as “a Jewish global human rights organization researching the Holocaust and hate in a historic and contemporary context.”

The center’s associate dean, Rabbi Abraham Cooper, has helped to defuse antisemitism controversies involving celebrities for decades, such as the recent one surrounding Nick Cannon in 2020, in which Cooper personally engaged in several dialogue sessions with Cannon. Other Wiesenthal Center representatives are regularly quoted in mainstream articles.

But the center’s recent publication of its annual “Global Anti-Semitism Top Ten” list has drawn intense criticism from top officials in Europe, including the European Union’s top antisemitism commissioner — who says that the group is tarnishing Wiesenthal’s legacy and harming the global fight against antisemitism.

Since 2010, the center has published a list of what it deems to be the most antisemitic entities in the world. Past years’ lists have also drawn criticism, including the 2017 mention of former Berlin Mayor Michael Müller for not taking a stronger stance against the Boycott, Divestment and Sanctions movement. Leaders of German Jewry called that entry “grotesque.”

The center’s 2021 list proved to be even more antagonistic. After the state of Iran, which openly calls for the violent destruction of Israel, and Hamas, the Palestinian group that rules Gaza Strip and that the United States considers a terrorist organization, third on the 2021 list is the BBC, which has been under intense scrutiny since its disputed report on a London antisemitic attack. At No. 5 is Jewish Voice for Peace, a Jewish anti-Zionist activist group.

And at No. 7 is the entire state of Germany, which the Wiesenthal Center claims has “failed to curb anti-Semitic attacks from the far Right, Islamists, and the demonization of Israel from the Left.” Germany saw 2,032 documented anti-Semitic incidents in 2019, according to government figures — the highest tally since 2001 and a 13% increase over 2018.

The entry on Germany singled out Michael Blume, the commissioner against antisemitism for the German state of Baden-Württemberg, for “liking” a 2019 Facebook post from a “friend” that read: “Zionists, Nazis and radicals should quickly say goodbye to my friends list.” The Wiesenthal Center report says that Germany allows Blume to “engage in these anti-Semitic and anti-Israel activities on social media.”

Blume told the Jewish Telegraphic Agency that he does not recall “liking” such a post, and that he may have done so on a text that was later edited.

“I believe that Zionism is fully legitimate and that Israel has the right to exist securely for all times to come. For me, anti-Zionism equates [to] antisemitism, pure and simple. I have traveled to Israel as a friend and ally repeatedly and I have spoken and written extensively about this topic,” Blume told JTA.

Katharina von Schnurbein, the European Union’s coordinator for fighting antisemitism, wrote on Twitter on Dec. 29, 2021, that the center’s inclusion of Blume “discredit[s] the invaluable legacy of Simon Wiesenthal,” a Holocaust survivor who devoted his life to bringing Nazi war criminals to justice and provided leads that led to the capture of SS officers Adolf Eichmann and Franz Stangl.

The Wiesenthal Center, von Schnurbein tweeted, was “harm(ing) the fight against” antisemitism with its list.

Since assuming her current post in 2015, von Schnurbein has focused on building broad alliances for initiatives that her office has promoted largely behind the scenes. She has rarely criticized nonprofits publicly and is not known for picking fights with organizations whose mission statements overlap with that of her office.

She wasn’t alone. An umbrella group of Jewish communities in Baden-Württemberg, known as the Israelite Religious Communities, expressed support of Blume and sharply condemned the Wiesenthal list in a statement.

“The Jewish communities in the state unanimously condemn the attempt to denigrate the antisemitism commissioner of the state of Baden-Württemberg by including him in the Simon Wiesenthal Center’s list of ‘Top 10 Worst Antisemitic Events’ for the year 2021,” the IRG group wrote in a statement. “It is heinous to put this bridge builder on a list of enemies of Israel.”

With almost half the world’s Jewish population residing in Israel, “you cannot fight ‘anti-Semitism’ without opposing all those who attack Zionists and demonize Zionism,” Cooper wrote in an email to JTA. “This fact is embedded in the IHRA definition of anti-Semitism. In 2021 and beyond, people who have positions of responsibility to monitor and oppose anti-Semitism must make clear that includes demonization of Zionists and demonization of Zionism.”

The International Holocaust Remembrance Alliance, or IHRA, definition of antisemitism includes examples of some forms of anti-Israel speech. Dozens of countries have adopted the definition, despite protests by Palestinian activists and others who say it limits free speech on the Jewish state.